Please refer to our Privacy Policy for important information on the use of cookies. By continuing to use this website, you agree to this.
Home Latest "We Have To Reinvent The Market Economy" — Davos Grapples With Capitalism's Legacy 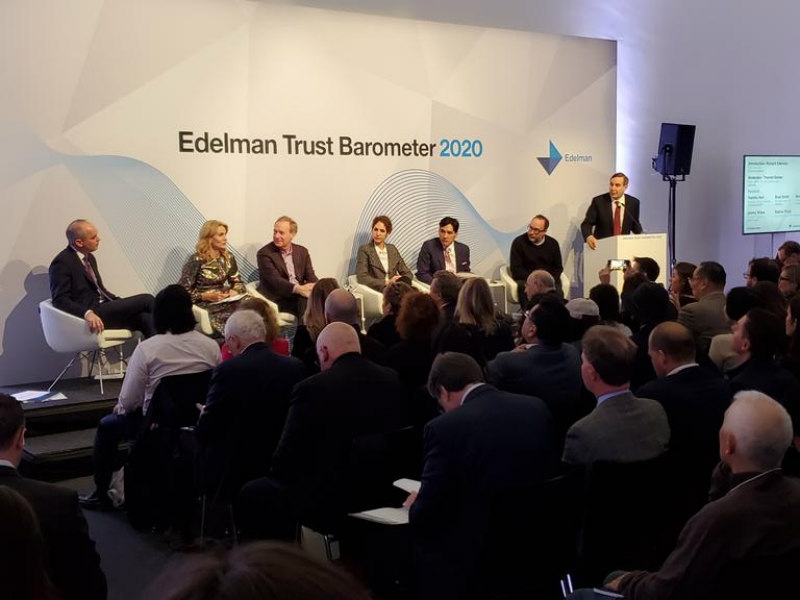 Distrust of capitalism and the impact of technology poses grave risks for democracy, according to panellists at today's Edelman Trust Barometer session in Davos.

Edelman's 20th Trust Barometer study found that 56% of respondents believe 'capitalism as it is currently conceived is a force for bad across the world', while 75% think the system doesn’t work and is unfair. That, says Richard Edelman, helps to explain why "democracies are losing."

"This becomes the question for the next decade," said Edelman. "Will it be state capitalism or the liberal economic model? Fears are eclipsing hopes. People are afraid of losing their jobs. In every developed country that we studied this year, more people believe that their incomes will decline in the next five years, than increase. In three quarters of countries, people believe their social status will go down."

Former Danish prime minister Hellene Thorning-Schmidt believes these findings are troubling for liberal democracies. "I think the jury is out on whether capitalism and market economies are part of the problem or part of the solution," she said. "We have to find a way to reinvent the market economy so it works for more people."

That, said Wikipedia founder Jimmy Wales, requires the system to be reformed — including the gerrymandering and voting systems that can effectively leave people feeling as if they have no representation. And while Microsoft president Brad Smith believes business can play a critical supporting role, he is doubtful of whether "democracy [can] be saved by people who are not elected by the public."

Regardless, the disruptive impact of technology on everyday lives means that neither business nor government can necessarily count on the confidence of their constituents.

"There are 2m long haul truck drivers in the US," said Wales. "Those jobs are going to go away very quickly. As soon as it’s cheaper and safer, they are just going to switch. The solution is not stopping technology. Governments and business need to be much more acutely aware of investing in retraining. People are not stupid. The system is already beginning to break apart."

All of which, said Thorning-Schmidt, means business must do more than just support. "What I’m worried about is that [business] will not do enough to really support the big debate about supporting democracy and supporting what politicians do," she said. "We need all the help we can get. To talk about how do we actually change capitalism. It’s not only about redistribution. The next step is pre-distribution. How do you really become stakeholders in the market economy? How do I gain when my country becomes richer?"

Those efforts, added Thorning-Schmidt, are complicated by an environment in which politicians "no longer have a responsibility towards the truth."

"Politicians no longer get respected if they engage in any form of dialogue or compromise," she explained. "We will never gain trust in the liberal market economy again, if we don’t regain trust in the art of compromise and dialogue."