Please refer to our Privacy Policy for important information on the use of cookies. By continuing to use this website, you agree to this.
Home Latest White Men In PR Still Paid More, Promoted More Readily

Nearly all diversity pledges are around recruitment, retention and advancement — but what about pay equity? PRovoke Media research reveals little progress since 2017.

Over the past 12 months, the PR industry faced a reckoning around its lack of racial diversity, especially in leadership. While the industry has mostly fallen short on immediate goals, many agencies have made tangible commitments to do better with metrics, targets and deadlines. Most of these pledges are around recruitment and retention — but what about pay equity? When we last explored this topic in 2017, our data pointed to a discouraging pay gap that favored white men by more than $6,000 over all others.

The numbers for 2021, unfortunately, don’t fare much better. Based on our Best Agencies to Work For data that included more than 3,000 responses from employees of nearly 40 agencies across North America we found the pay gap, indeed, persists. 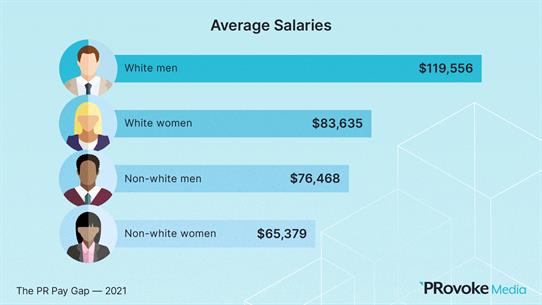 White men topped the salary ranking averaging $119,556. Just like in 2017, white women finished second with their salaries averaging $83,635. Non-white men and women lagged, coming in at $76,468 and $65,379, respectively. This is particularly devastating when taking into account that women makeup 75% of the overall PR workforce in North America.*

“Non-white men and women account for a much smaller percentage of the total respondent base than their white counterparts meaning that insights and comparisons between the two groups should be interpreted broadly,” says Emily Peet, research director at Rockland Dutton, the firm that handled the data analysis. “Even so, there is a ways to go to reach to pay equality and to address the broader issue of ensuring that non-white employees are equally represented in leadership positions and across the PR industry at large.” 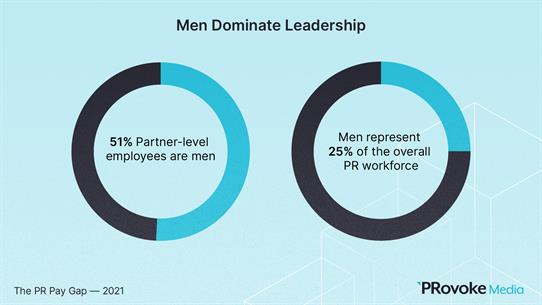 Also, white men comprised 19% of the respondents — yet, 25% of those men make more than $200K per year. Part of the reason is, men are astonishingly overrepresented at the top ranks of the profession. For instance, 51% of partner level employees identify as male, whereas men represent only 25% of the overall PR workforce. Men dominating leadership, however, doesn’t start at the partner level. In every category following vice president, men outnumber women in leadership roles. When men are fast-tracked into leadership, their bigger salaries follow them as they move through their careers.

Recently some companies have gone as far as publishing salaries. More commonly, however, is the practice of sharing salary ranges,  which according to a recent LinkedIn report is done by more than a quarter of companies. Yet, 51% of companies still cloak salaries in secrecy, even though more transparency around money does lead to more equal pay.

“I’m one of those people who thinks that radical moves need to be made to see change happen,” says Barbara Bates, who recently transitioned from global CEO of Hotwire into a senior advisory role at parent group Enero. “In this case, the only way to solve this issue is full transparency by making salaries public. I realize the issues this may cause but only when employers are forced to face their actions publicly will they be held accountable.” 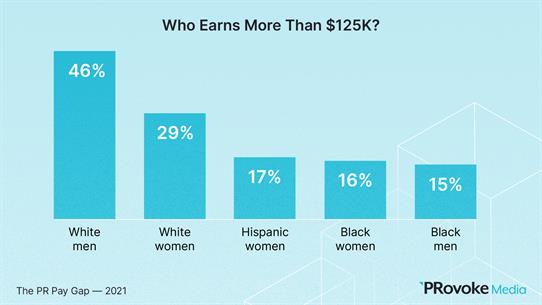 Helen Shelton, global chief diversity officer at Finn Partners, says her firm closely monitors salaries and compensation. She is also on the board of New York Women in Communications that has launched an initiative designed to address the pay gap.

"You can’t fix what you won’t face,” says Caroline Dettman, founding partner at Have Her Back Consulting. She also suggests taking an “adjusted pay gap” approach — so instead of considering the problem fixed after a single audit, companies should make course corrections on a regular basis to account for salary fluctuations that inevitably happen, especially in client service when staffing needs can change quickly.

That's the way IPG-owned Weber Shandwick handles pay equity. A spokesperson from the firm told PRovoke Media the agency reviews compensation during every promotion and increase cycle to identify and address gaps.

Jamie McLaughlin, founder and CEO of recruiting firm Monday Talent, advocates for peer reviews for promotion and pay raises — ending the “meteoric myth” that enables a single leader to swiftly promote a favored employee, as those trajectories tend to be “unconsciously or even consciously biased.”

Gary Rudnick, president & COO at Golin, told PRovoke Media that in early 2019 the IPG firm enlisted an external statistical expert to analyze gender pay gap globally and “found no discrepancies between men and women – looking at both full-time and part-time employees, and making individual adjustments where merit increases were earned.”

Edelman, meanwhile, plans to make pay equity a priority this fiscal year. “We believe pay equity is critical to retaining and rewarding our best talent," Yanick Wilson, US chief talent officer told PRovoke Media. "It should be a focus for all organizations including our industry, and getting it right is one of our initiatives for FY22.”

FleishmanHillard also conducts "regular pay analyses of internal and market-specific pay data to ensure compensation is equitable. We have engaged an external consultant to provide a further and more comprehensive audit of US pay equity across age, race, gender, tenure and job responsibilities. That process will inform the development of our pay equity policy," said  Lisa Moehlenkamp, the Omnicom firm's chief talent officer. 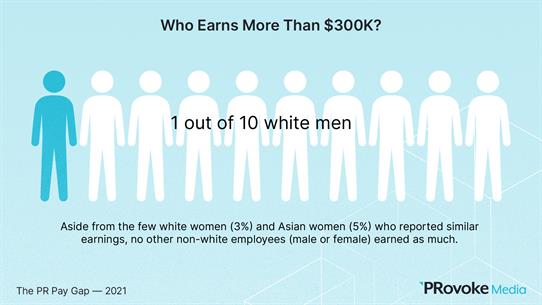 There’s another danger when white men dominate leadership: the scarcity effect takes hold. When this happens, women and people of color recognize there’s a limited appetite for their input at the leadership level, creating a hyper-competitive environment for anyone other than white men. Having said that, it’s clear the industry takes women in leadership more seriously than it ever has — and, increasingly, people of color are smashing glass ceilings.

But there are, of course, still societal factors at play that have become exacerbated by Covid-19. According to McKinsey’s sixth annual Women in the Workplace report, one in every four women in senior-level positions are considering scaling back work responsibilities via reduced hours or moving part-time; taking a leave of absence; or leaving the workforce altogether. The report points out: “Even before the pandemic, women in senior-level jobs tended to feel a need to work harder and longer than their male colleagues. Now they are burning out at a higher rate than their male counterparts.”
"You need to challenge yourself to look beyond the next male successor"
In addition, Black women “face systemic barriers to advancement, receive less support from managers, and experience more acute discrimination. They report a lack of strong allies at work and a greater quantity of microaggressions and are almost twice as likely as women in general to feel unable to bring their whole selves to work.”

In March, we ran a four-part series documenting the anguish that women — across demographics —  have faced since the pandemic and how that's spurred many to see workplace inequities more clearly. And as the industry looks down the barrel at perhaps its most serious talent shortage in decades, agencies that do not make clear paths for advancement for women and people of color might be left even more exposed.

“Ask yourself — what is your leadership succession,” Dettman adds. “Who are the women and people of color? What are they doing and do they know that’s their next step? Are you up-front in sponsoring that next step? You need to challenge yourself to look beyond the next male successor.”

*Salary data was calculated using a weighted average based only on those who indicated their gender, race/ethnicity, and salary, accounting for 92% of the total respondents. Baseline salaries were calculated using the lowest end of the salary ranges reported by respondents.