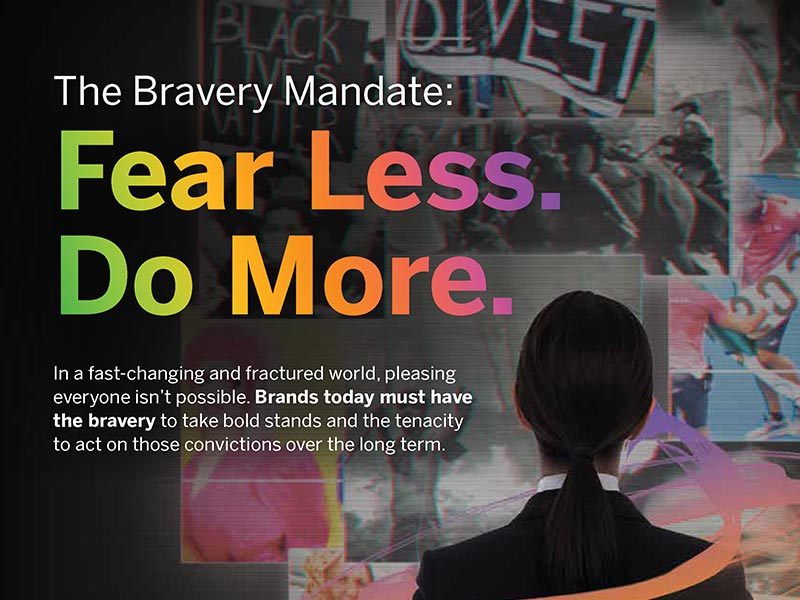 Why Outspoken CEOs Stand Out As Leaders

The latest annual Brands in Motion study from WE Communications finds the benefits of CEOs getting personal with stakeholders outweigh the risk of public gaffes.

NEW YORK — A growing number of outspoken CEOs — Microsoft’s Satya Nadella, Bumble’s Whitney Wolfe Herd and DBS Bank’s Piyush Gupta among them — have changed the game for the C-suite, with half of global consumers now expecting chief executives to frequently go public with their personal opinions, according to the latest Brands in Motion study from WE Communications.

That number rises when parameters are added. 70% of consumers support CEOs sharing their opinions with at least one of five audiences — employees, customers, shareholders, social media and the media — from “almost constantly” to every three months.

And while not all CEOs agree with the practice (Basecamp controversially stopped commenting on social issues), they may have to get used to it; executives who show the courage to candidly communicate — even if it means making mistakes along the way — are the ones who will stand out as leaders, the research found.

“To maintain long-term trust, executives need to be vulnerable and own their mistakes,” said the report, released Wednesday. “Again, the audience is sophisticated. They know the difference between a sincere apology and corporate damage control and will forgive the former.”

Those key findings were part of WE’s sweeping Bravery Mandate study, the fifth annual look at the range of issues facing brands as they are increasingly called on to help make the world a better place amid crises, divisiveness, and fast-changing consumer expectations. WE conducted the study in partnership with YouGov, which polled 8,353 consumers and B2B decision makers in eight countries: the US, UK, Germany, South Africa, Australia, China, India and Singapore.

Participants’ support of having more outspoken, more personable CEOs was in keeping with other findings of the larger report, which found that consumers increasingly expect businesses to be a stabilizing force in rocky times — requiring brands to intensify their efforts to make positive impact, even if it means losing stakeholders who aren’t onboard.

The importance of employee well-being emerged as a central finding of the report, as buy-in from staff is critical for the success of company initiatives, particularly those that are purpose-driven.

Brands in Motion data also shows that customers expect brands to focus on issues relevant to their sector — the health sector should focus on issues like access to health or mental health, for example, while the tech sector could address digital inequality.

And brands that genuinely want to build a purpose legacy need to be in it for the long haul, systematically taking steps like making long-term investments in issues stakeholders care about and reviewing them regularly. Superficial statements and one-off projects don’t go far in addressing the issues stakeholders care most about, such as climate change and income inequality.

Brands also need to be prepared to engage on provocative issues as they arise, particularly given younger generations’ stronger inclination to make purchases based on brands’ stands on issues. 70% of Gen Z and Millennial respondents said they’re more likely to buy from a brand that addresses issues they find important, versus 64% of Gen X, 58% of Baby Boomers and 58% of the Silent Generation.

"Becoming a leader on societal issues is both a marathon and a sprint," the report said. "It requires the agility to respond to events in real time, and the endurance to maintain sustained, long-term commitments."