Please refer to our Privacy Policy for important information on the use of cookies. By continuing to use this website, you agree to this.
Home Latest World Report: Huge Leap In Clients Wanting More Comms For Less Budget 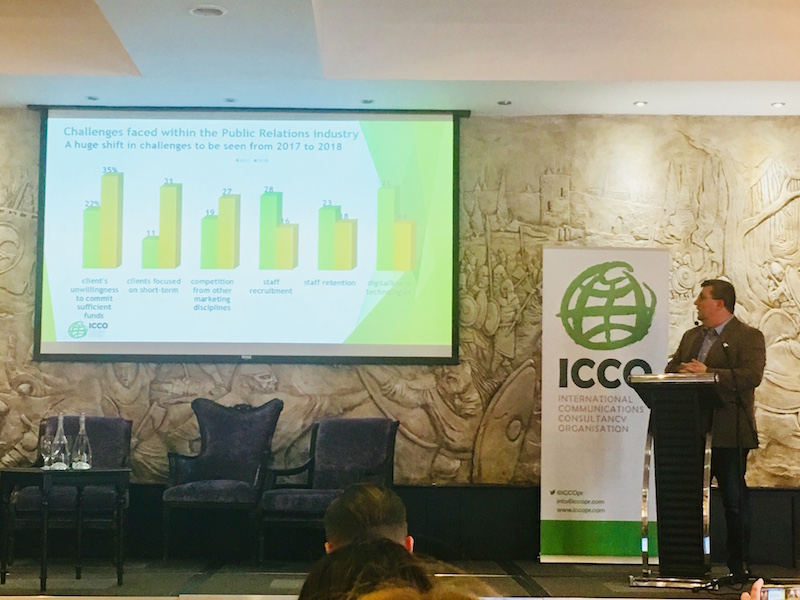 DUBLIN — More than a third of European PR agencies say clients’ unwillingness to commit sufficient funds to PR is now their key challenge, according to new research from the International Communications Consultancy Organisation (ICCO).

In a preview of the forthcoming annual ICCO World Report at the ICCO Global Summit in Dublin this week, regional president Juergen Gangoly, CEO of Austrian PR agency The Skills Group, said 35% of the organisation’s European members said “more comms for less budget” was their biggest concern, leaping up from 22% last year.

There was an even bigger increase in the number of agencies across Europe who say their clients are focused on the short term, up from 11% in 2017 to 31% this year, making it the second most pressing challenge. Gangoly said: “They want short-term results, while we are looking for long-term relationships. I’ve had clients this year tell me they don’t care what happens in five years, as they won’t be here.”

Other challenges included competition from other marketing disciplines, up from 19% to 27%, and digital/new technologies, down from being seen as the biggest challenge last year (31%) to 18% last year. Recruitment was also seen as a slightly less concern this year, down from 28% to 16%, and only 18% of respondents said staff retention was their primary challenge, down from 32% in 2017.

Overall, however, the survey found that 47% of agencies are “very optimistic” about the growth of the PR industry, and 41% are seeing an increase in profitability this year.

Areas of future growth included digital communication – 69% said they expected this to be a growth area – as well as corporate reputation (41%), marketing communications (33%) and social responsibility (39%).

Mirroring this, the skills identified as being most important for the future of the industry were an even split of crisis management, creativity, multimedia and content, measurement and analytics, insight and planning, and social media community management.

Outside the scope of the ICCO World Report, another big challenge discussed at recent European meetings was the declining trust in media all over Europe, with the mainstream media in financial difficulties and the dominance of the so-called “boulevard” or tabloid media.

Gangoly said: “The freedom of the press is under pressure in an increasing number of European states, including journalists going to jail for critical reporting of governments, and this is having a massively negative impact on PR. Our colleagues in Hungary have seen around 50% of independent PR consultancies vanish from the market, because of politics and pressure on the media.”