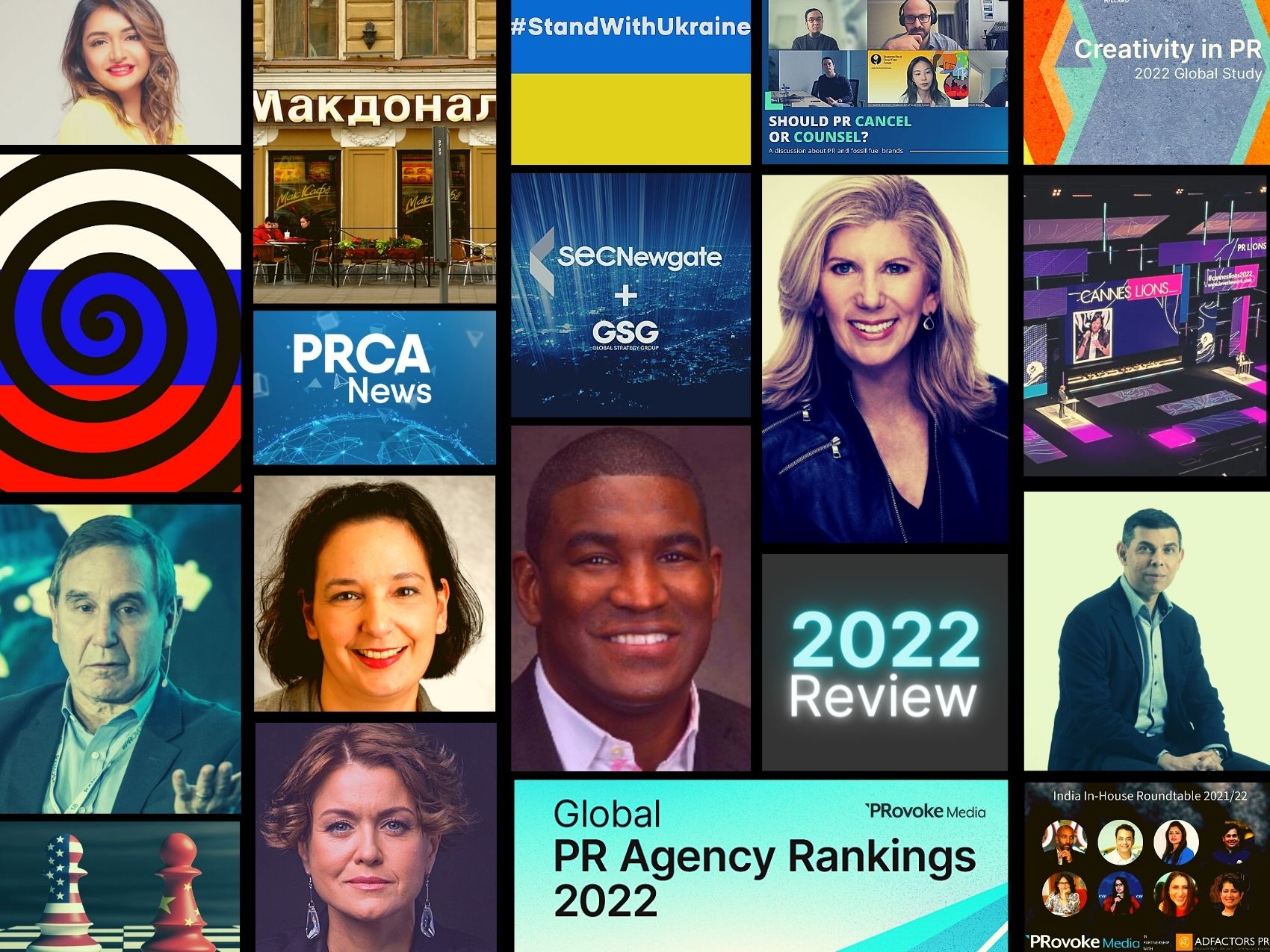 The Ukraine war drew plenty of attention from PRovoke Media readers this year, along with numerous senior staff moves, and dramatic events at Keurig Dr Pepper, PRCA and Zilingo.

We conclude our 2022 Review with our 12 most-read news stories of the year. As ever, we've excluded awards and ranking stories as they skew results.

Unsurprisingly, the Ukraine conflict attracted plenty of interest from our readers, along with senior moves and intrigue at a number of agencies and in-house departments. Meanwhile, there was also considerable drama to contend with in 2022, not least when it came to events at Keurig Dr Pepper, the PRCA and Zilingo.

1. Agencies Decry Unfair Payment Terms In Keurig Dr Pepper PR Retainer
Diana Marszalek's remarkable reporting uncovered a genuine industry scandal when she revealed that Keurig Dr Pepper (KDP) was asking agencies to accept 360-day payment terms in its latest RFP. In this follow-up, Marszalek charts the response from agencies and trade groups, highlighting the increasingly unfair nature of client contracts. Yet while outrage was not in short supply, KDP still managed to secure an agency on these terms, proving that there are always firms willing to suffer for the prestige of a sought-after partnership.

2. From Ukraine With Love
What a year it has been for Nataliya Popovych, the founder of Ukrainian PR agency One Philosophy, who became one of the leading advocates for business withdrawal from Russia when her country was invaded in February of this year. And while Popovych was hardly unprepared for the high-profile role she assumed, there is no denying the emotional toll that accompanied her efforts — brought home in this wrenching first person account of how Russia's brutal invasion was affecting her colleagues, her family, and her country.

3. Richard Edelman On Crossing The $1bn Barrier: "It's An Out Of Body Experience"
It took 70 years, but Edelman became the PR industry's first $1 billion agency midway through this year, thanks to a strong rebound that helped it register 18% growth for the 2022 fiscal year. For Richard Edelman, the barrier proved to be more magical than most, with the Edelman CEO describing the conquest as "an out of body experience". Yet Edelman is not likely to rest on his laurels; by the end of the year, the firm was again considering layoffs as economic conditions began to bite.

4. Starbucks Promotes AJ Jones To CCO
Aranthan 'AJ' Jones II was promoted to one of the comms world's highest-profile positions when he became Starbucks CCO in August of this year, after 12 months with the coffeehouse giant. As the first African-American to hold the role, Jones' ascension was welcome news for a profession that still struggles with diversity at the highest levels.

5. Global PR Industry Pledges Communications Support For Ukraine
The PR industry was quick to mobilise in the wake of Russia's invasion of Ukraine, pledging considerable communications support to a range of efforts intended to combat state-sponsored disinformation. And, as Paul Holmes predicted in a longread on the topic, as the year progressed, it seemed ever more clear that accurate, factual news was making a critical difference in Ukraine's ability to resist the illegal invasion.

6. Straits Times Editor Warren Fernandez Joins Edelman As Asia-Pacific CEO
Edelman's Asia-Pacific operations have attracted plenty of scrutiny in recent years, not least because of the leadership turnover that has accompanied the firm's top job in the region. The latest contender is Warren Fernandez, who departed a lengthy career with Singapore's Straits Times newspaper to become Edelman Asia-Pacific CEO, charged with reinvigorating growth across the critical region.

8. SEC Newgate Buys "Significant Stake" in GSG
M&A activity showed little sign of slowing down among PR agencies in 2022, and one of the bigger deals saw Italian communications group SEC Newgate buy a sizeable stake in US public affairs powerhouse Global Strategy Group. The move came after SEC Newgate delisted from the London Stock Exchange and returned to private ownership, with Three Hills Capital Partners beoming a minority shareholder. The private equity firm is providing initial funding of $53.25m to support the next stage of the group’s growth plans, including global expansion.

9. PRCA Launches Governance Review & Complaints Investigation
After months of growing disquiet and complaints from members, the PRCA finally launched a formal governance review, alongside an investigation into the conduct of director general Francis Ingham, who has led the organisation since 2007 and has also been the chief executive of the International Communications Consultancy Organisation (ICCO) since 2013. The reviews came as a number of firms — Ketchum being most prominent — suspended their membership, but have yet to produce any definitive results.

10. Barri Rafferty Leaving Wells Fargo After Less Than Two Years
Less than two years after being tasked with cleaning up the bank’s image, former Ketchum global CEO Barri Rafferty was stepping down from Wells Fargo — counting as one of the year's biggest in-house people moves. Meanwhile, Wells Fargo's reputation continues to suffer, with the Consumer Financial Protection Bureau (CFPB) launching an investigation into the bank’s automobile lending, consumer-deposit accounts, and mortgage lending practices, that could cost more than $1 billion in settlement fees.

11. Zilingo Suspends Communications Head Amid Leadership Crisis
Singapore paid host to one of the year's biggest PR stories, when the e-commerce startup suspended comms head Naushaba Salahuddin, after the communications/PR head questioned her own employer's media statements in the wake of CEO Ankiti Bose's suspension for financial irregularities at the fashion e-commerce platform. Bose and Salahuddin were both soon gone, but Zilingo continues to fight for its future amid rumours of liquidation.

12. Blueprint Diversity Mark No Longer Held By Two Agencies
No one ever said diversity and inclusion progress would be easy for the PR industry, but it was still dispiriting to learn that two UK agencies no longer held the coveted Blueprint diversity standard. Ketchum had its Blueprint mark removed for contravening an anti-poaching agreement, while Ready 10 resigned its Blueprint ally status for reasons that remain unclear.