Please refer to our Privacy Policy for important information on the use of cookies. By continuing to use this website, you agree to this.
Home Longreads "An Extremely Difficult Client To Represent": PR Firms Steer Clear Of HK Government 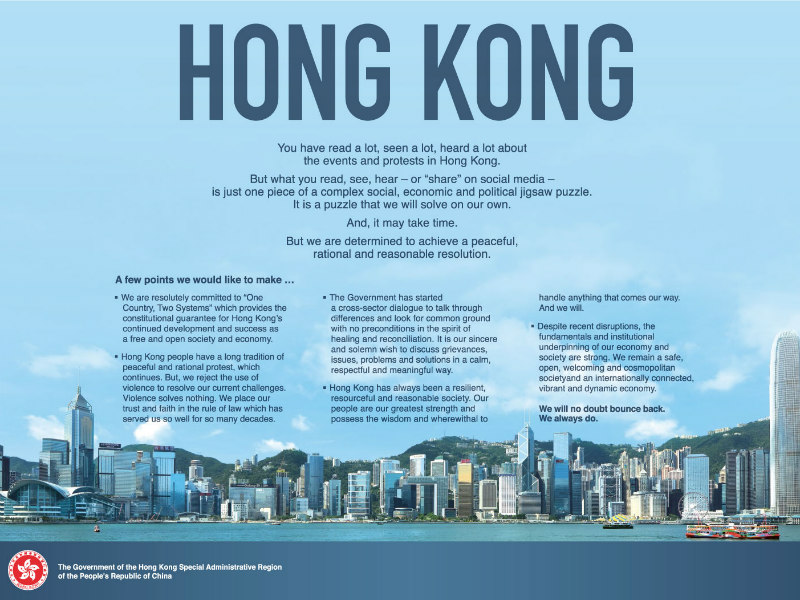 The PR industry's decision to turn down Hong Kong's global reputation brief is a victory for pragmatism, above all else.

It is hard to not have a measure of sympathy for Hong Kong’s beleaguered Information Services Department (ISD). More accustomed to earnest efforts that tackle such pressing issues as fire safety and drug awareness, the government publicity unit was probably unprepared for the global furore that has accompanied its fruitless search for a PR agency, revealed in these pages last week.

As Hong Kong careens, apparently effortlessly, into its 16th week of unrest, the ISD are probably not the only ones that hanker for a more pedestrian past. But with the world's attention focused squarely on the iconic city, the notion that eight PR firms would turn down a global PR brief represents an irresistible headline at a time when the Hong Kong government faces fierce criticism for its woeful management of the current crisis.

That all of the invited agencies would back away from the brief must still count as something of a surprise, even in this post-Bell Pottinger era when — we are told — ethical considerations reign supreme. But the industry’s aversion to the ISD brief may well be more about optics than ethics, reflecting the pragmatism that continues to underpin agency decisions, for better and for worse.

"The fact nobody feels they can touch it right now, is extraordinary,” says one global agency head familiar with the process. “It’s an extremely difficult client to represent,” added another.

Conversations with relevant sources at the agencies, all of whom requested anonymity, point to staff concerns as one of the primary considerations. Recent events at Edelman and Ogilvy have shown us why employee activism is not limited to big corporates alone. And Hong Kong's PR firms are largely staffed by younger, educated citizens, the kind of demographic with whom, it is probably safe to say, the protest movement has struck a particularly resonant chord.

"I’ve got to look after my staff,” said an agency head. "I’ve got employees who feel very passionately about this issue, as they should. Some would not appreciate us working on this topic for the Hong Kong government.”

"Your employees and half your clients will have a view on it,” says Enero director David Brain, who previously led Edelman Asia-Pacific. "That’s not the kind of work they want you involved in. If, as a client, I saw an agency take that on, I would say that lacks the kind of judgement I’m looking for.”

Beyond employees and clients, there is also the thorny topic of Beijing to consider. An assignment of this nature, addressing “negative perceptions” of Hong Kong and attempting to "bring out the success of 'one country, two systems’,” is more than likely to attract attention in the ultimate corridors of power. And who knows how this could affect the global PR industry's extensive interests in the mainland, particularly if the campaign were to unfold in a less than positive fashion?

"There are many huge PR accounts with companies that owe some or all allegiance to the Chinese government, and how would it look for agency X to fail to restore Hong Kong’s reputation or, worse, tell it the painful truth?” wrote marketing consultant Jonathan Salem Baskin on LinkedIn. "The overlords in Beijing have no problem putting pressure on companies to do their bidding...or punishing those that earn their displeasure.”

"It’s just too tricky, too difficult, too toxic”

Perhaps the most serious misgivings, however, centre on the nature of the brief, memorably described last week as "an absolutely living, breathing example of why [the Hong Kong government has] got problems.”

Specifically, agency chiefs noted profound concern that the campaign was an attempt, in the words of one, to “paper over the very large, gaping cracks” caused by the Hong Kong government’s inability to tackle the problems in the city.

"This is a very big strategic problem on which they need a range of deeper advice, and some of that is communications advice and longer term campaign advice,” said an agency head. "What they don’t need is ‘pretty’ marketing communications advice. There’s such a big disconnect between tone and reality.”

Any PR strategy, presumably, is only as effective as the facts on the ground. "When it comes to a situation like this, you have to address the real problem,” says another agency source. "Not through spinning your way out of it. A nice op-ed in the NYT is not going to manage or deal with this.”

A charitable interpretation of Carrie Lam’s comments at yesterday’s press conference suggests that Hong Kong’s chief executive may have accepted this argument. Pressed on the agencies’ refusal to take the brief, Lam said: “The advice that we have been given were that it is not the most efficient use of government resources right now, given the current social unrest.”

There is, though, the suggestion that enlightened public relations counsel could help Lam in her current predicament, particularly if you consider the listless communications efforts that she has deployed to date. That reflects the tension that often underpins sensitive PR assignments, where ‘ethical' counsel can often help steer an ‘unethical' client in the right direction. After all, if the PR industry only worked with clients that boasted unblemished reputations, it would not be much of an industry.

"A truly influential PR counsel can show the mirror, explain what is going wrong and steer the client into doing the right thing,” says Senjam Raj Sekhar, who previously led comms for Indian mining giant Vedanta. "For the Hong Kong administration, a PR firm could have helped facilitate a dialogue between the government and Hong Kong’s various stakeholders. More importantly, it could have provided sound counsel on what to do and what not to do so that damage to the reputation of the city is minimised."

"It’s an interesting conundrum if you think that strategic PR counsel can be a force for good,” adds Brain. "If there’s one place you want smart PR counsel, it’s next to Lam — it would actually improve the situation. But because PR is often defined by journalists as spin and/or evil, the agency would inevitably became the subject of attention.”

Unwanted attention, no doubt, typified by high-profile examples such as Ketchum/Russia, Edelman/the oil lobby and — most infamously — Bell Pottinger and the Guptas. If an agency were to commit to the Hong Kong government brief, they would need to know that their guidance was being taken very seriously indeed, no matter how uncomfortable that might seem to Carrie Lam’s government.

“Being advisors to decision-makers is a role we’re delighted to play,” says an agency head. "The trouble for a mandate like this is that it’s only worth doing if you’re a proper voice.  If you’re a route to a distribution mechanism, then it’s very frustrating.”

"You’re not really being set up for success here,” adds another agency source. "You can’t work through the ISD. You need to work directly with Carrie Lam.”

And that much must remain in doubt for as long as Lam, and her government, are caught between competing masters. “The government has to listen to Beijing and listen locally,” says a third agency head. "Even at the ISD level, there’s probably a lot of second guessing going on. Even if they were to hire the largest comms firms, who would actually be listening? Are they prepared to act on the advice?”

Ultimately, once you consider all of these concerns, the ISD assignment probably seemed like more trouble than it was worth. And that is without mentioning the one-week deadline for proposals and the questions about budget that another agency head raises.

"It’s just too tricky, too difficult, too toxic," says an agency head. "If it’s flimsy, then you look like you’re putting lipstick on the pig,” adds another. "And if it’s substantive, then there’s a concern you are justifying things staff don’t want.”

Let us not pretend, though, that there are not agencies out there who would happily accept the assignment. One has already come forward in public, pointing to the ethical baggage that often accompanies big accounts in such areas as energy and tobacco. It is hard to believe that numerous PR operators have not already contacted the ISD by now, unless the Hong Kong government has actually reached Cambridge Analytica levels of notoriety.

If nothing else, though, the Hong Kong PR saga (and Cambridge Analytica before it) reflects the care with which agencies are increasingly being forced to tread. And that is no bad thing, considering some of the more dubious assignments that have bedevilled the industry’s reputation. But it would also be nice to think that PR professionals are willing to speak truth to power in situations such as these, no matter what the cost is to their bottom lines.

"Is it a sign of the maturity of the PR industry that it refuses briefs of governments and organisations seen as authoritarian and repressive?” asks Raj Sekhar. "Or is it that firms want to play safe and escape any repercussions of being associated with an unpopular regime?”

But as investor services downgrade the city's outlook and passenger arrivals drop precipitously, a PR agency head notes that “the reputation damage from this is almost existential,” requiring Hong Kong to eventually undertake "a fundamental relaunch, reboot and rebrand.” It is difficult to see how that can be credible if it attempts to gloss over the inexorable realities that now appear to define the fortunes of 'Asia's World City'.