Diversity leaders are commonplace at many firms, but the PR industry remains astonishingly white — calling into question the effectiveness of the role, and whether it merely serves as lip-service.

This is an exceptional moment for the PR industry. With Covid-19 coinciding with last month’s Black Lives Matter movement, firms are taking action on racial equity during a recession. More typically, a weak economy means diversity efforts fall to the back burner, not just for PR, but across sectors. For instance, look at the recent data from Glassdoor: diversity and inclusion job openings dropped 60% — twice the rate of overall job postings — during the period from March 2 to June 8.

Yet those numbers took a stunning turn after June’s Black Lives Matter protests: executive and leadership job openings more than doubled since June 8 and among the most in-demand roles —  chief diversity officer  and vice president of diversity & inclusion. Hiring for diversity and inclusion-related jobs rebounded 55% since early June.

“While the Covid-19 crisis initially pushed companies to pull back on investments in diversity and inclusion, new Glassdoor Economic Research suggests that pressure and awareness from employees may be spurring companies to back up their commitments with action,” says Glassdoor’s senior economist Daniel Zhao.

Weber Shandwick, Edelman, Finn Partners, Porter Novelli and MWWPR are among the firms that had diversity & inclusion leaders in place for several years. But since June, many other firms joined their ranks, among them: FleishmanHillard and Praytell, meanwhile W2O Group has an active job opening for a head of diversity and inclusion.

While the PR industry has made commitments to improving racial equity, progress has been agonizingly slow and incremental. With nearly 90% of employees identifying as white, the PR industry remains astonishingly non-diverse, plus there is evidence of pay inequities.

This calls into question how effective its efforts have been and whether progress is welcome — or simply lip-service? One thing is clear, the industry needs to reflect on the role of the diversity, equity and inclusion officer and understand what needs to be done differently to ensure the position lives up to its name.

“We need to consider new D&I leadership at the helm that reflects new thinking, in some cases,” says Angela Chitkara, a researcher for the World in 2020 project. “The D&I role needs to be democratized and everybody needs to be part of the conversation. D&I is a long term game.”  "It’s not the role of the chief diversity officer to fix the problem" No matter how the job is restructured or retooled to be more effective, it’s clear that D&I leaders cannot shoulder the responsibility of diversifying the industry. And for organizations to truly be equitable, people of color must have many pathways to senior leadership, beyond the DE&I track.

Ensuring the D&I officer has adequate resources has “always been tough,” Moore-Roberts acknowledges. In her current role, she has “a very small team”  — but that’s expanding (she declined to say by how much). And part of her role is evaluating resources across the group and allocating these to each CMG firm, depending on its needs.

“The overarching role I play from CMG is to develop that unifying point of view around D&I and enable that point of view to be adopted at the agency level,” she adds.

A D&I leader, who asked to remain on background, says as organizations pledge to become 'anti-racist,' they must remove the stigma from talking about whiteness. This means having, often uncomfortable, conversations about white privilege, white fragility and, in a women-dominated industry, ensuring that feminist initiatives are intersectional.

“This is more relevant than ever and D&I leaders are triage, first responders throughout the organization” as these difficult conversations take place, the source says.

Edelman’s global chief diversity & inclusion officer Trisch Smith adds, “Establishing the D&I leadership position has become a quick band-aid solution for many agencies. It is not the sole and complete answer. The D&I leader cannot be successful unless the full agency leadership – in most cases, not very diverse – is committed to real progress, considers the experiences of diverse employees, and breaks down conscious and unconscious bias at all levels.” "You can’t treat this like an adorable side project" Helen Shelton, senior partner at Finn Partners, has taken the lead on the firm’s D&I efforts since 2016. In that time, the agency’s demographics expanded to include 22% people of color. Shelton, who reports directly to CEO Peter Finn, says while the agency still has work to do, its above-average diversity is a byproduct of having a CEO fully invested in that outcome.

“It’s one thing for me as a Black woman, to say hey, we’ll do this program,” she says. “But if it doesn’t come from the CEO — and in many cases that’s a white man — it doesn’t have the same impact. It needs to be co-signed, endorsed and enforced by the top person.”

Smith, who has led D&I efforts at Edelman since 2015, reports directly to CEO Richard Edelman. “It needs to be part of senior leadership,” she says. “Responsibilities need to include goal setting, training, employee engagement, including employee resource groups, external partnerships and more.”

She adds that many organizations focus solely on diversity while overlooking the importance of an inclusive culture. “We haven't looked at what it really means to be inclusive. For me, that means that you are not just inviting someone in the room, but you're also making sure they have a seat at the table and that all voices are heard,” she says.

Amber Micala Arnold is a corporate communications account director at MWWPR and also founded and leads the independent PR firm's diversity and inclusion council, although the latter is not an official, paid, diversity leadership position. She says D&I leaders are often tasked with retention, but HR tends to take the lead on recruitment and promotions.

“A lot of D&I leaders are in charge of implementing new programs and mentorship/sponsorship initiatives, which are nice, but the people who actually do the hiring and promoting, may not be a part of that,” she says. “And that’s where we’ll see the direct progress — in the hiring and promoting. It goes back to that culture vs recruiting divide. Though inextricably linked, talent management versus culture are two different things. For those D&I leaders who do have more of a hand in talent management, they may not always be set up for success.”

The D&I leader who asked to remain on background adds, “You can tell by the way that position is organized whether they are serious about the role or not. If it’s a part-time role that relies on someone’s deep passion, on top of other work,  that setup is really tough. You can’t treat it like someone’s adorable side project.”

Industry veteran Bonin Bough — who has worked at Mondelez, PepsiCo, Weber Shandwick, Ruder Finn, among other organizations — recalls being recruited for diversity committees throughout his career that spans more than two decades.

“I have no experience on how to do this, but at the same time I would wonder — if not me, who?” Bough says. “In those days, it was an addition to what you’re already doing. Now there’s a dedicated role, but often, there’s no money and no decision-making power. For these roles to be empowered, they have to be considered part of the business.”  "Is it a cover?" An inevitable question arises, does the chief diversity officer position need to exist? If everyone within the organization ultimately shoulders the responsibility, should the role be dissolved and fused into the responsibilities of all senior management? LaGrant Foundation chair Kim Hunter says: “What is the validity and credibility of these roles? What do they do? They have limited budgets, limited staff. Why do you have it if it’s not delivering — or is it a cover?”

Mike Paul, Reputation Doctor president, adds: “I strongly believe DEI officers and other D&I positions are cover, spin and highly ineffective and should be fully eliminated. I believe the CEO and board should be fully accountable for all diversity and inclusion period. The solution is hiring senior executives into P&L leadership positions by the dozens with no excuses and a voting board of at least 1/3rd executives of color by white board members courageously giving up their seats now. You can’t say you want to help and not do the above. It is a major part of the solution.”

Chitkara points out that firms which made early commitments to inclusive cultures, mentorship and sponsorship, and that support D&I metrics, have made some progress. “However, more coordination is needed and fewer turf battles. No one owns diversity and inclusion in our industry. We need to address it together.”

Assuming the D&I leader has achieved authority and resources — how should success be measured? For years, diversity champions like Hunter have stressed that quotas and compensation are imperative to turn diversity into a reality at most PR firms. But a deep-seated backlash to affirmative action pushed these practices out favor for decades. Now with so many failed attempts at diversifying the workforce, many organizations are reconsidering.

“The reality is, it’s really hard to level the playing field without finding people of color to interview for each job opening,” Shelton says. “People of color aren’t treated fairly at agencies and that’s where D&I — working in conjunction with other leaders — has to build guardrails to make sure no one is knocked off the playing field.”

Chitkara urges firms to embed D&I accountability into all management positions, tying compensation to the organization meeting its goals in this area.

“If management doesn’t understand the value of diversity and inclusion on their teams, how will they be prepared for what is just around the corner — a new generation of multicultural talent and consumers,” she says.

Among the most common excuses for the industry’s lack of diversity is the scarcity of qualified candidates of color. Bough challenges the industry to reflect on the number of white candidates that make it through the interview process and ultimately end up being poor matches.

“We need to put people in these roles and begin to change the complexion of the organization,” Bough says. “It’s hard for hiring managers to truly judge hiring qualifications. There are plenty of people who aren’t qualified within organizations. But bias makes you hire people who operate like you. You have realize that ‘unqualified’ often means ‘misunderstood by me.’”

Bough advises companies to produce reports around D&I efforts, much like the sustainability ones many companies now publish to track progress around their environmental goals.

The reason, perhaps, can be traced back to a quote MWWPR’s Arnold made in 2017: “If something was geared towards your favor, would you want to let that go?If a whole system or structure was built with you in mind, would you want to dismantle it, even if it is the right thing to do? Not likely. Privilege is, and will continue to be, the greatest barrier to diversity and inclusion."

CEOs At Cannes Condensed: PR Industry Must 'Wake Up' To Opportunity On Offer
Arun Sudhaman
// 25 Jun 2021
View All
Latest 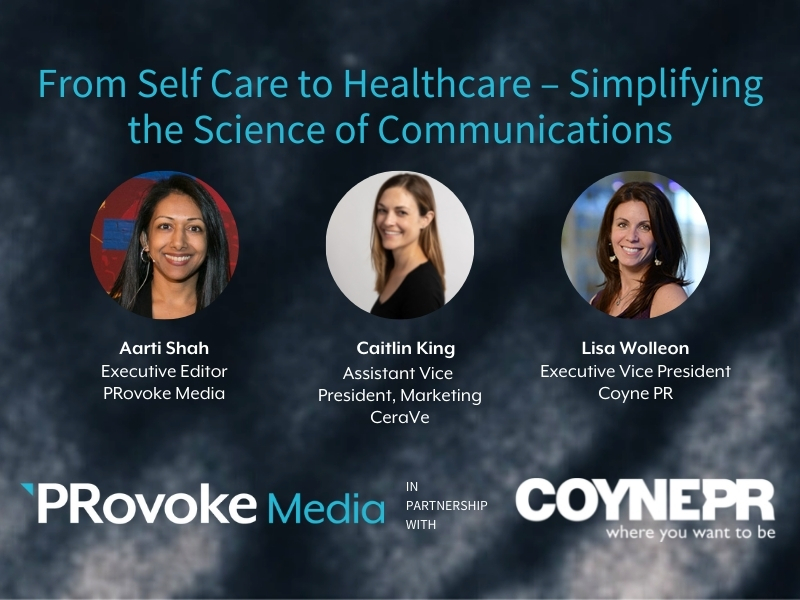 A Conversation With CeraVe On Influencers, Transparency & Purpose

The New Media Ecosystem: 'The Biggest Media Shift Since The Printing Press'

The Future Of Health: 'Our Storytelling Creates A Bridge Of Empathy'

Being Human In A Tech-Enabled World: Creativity