Please refer to our Privacy Policy for important information on the use of cookies. By continuing to use this website, you agree to this.
Home Longreads Creativity In PR 2017: The Rise Of The Creative Director 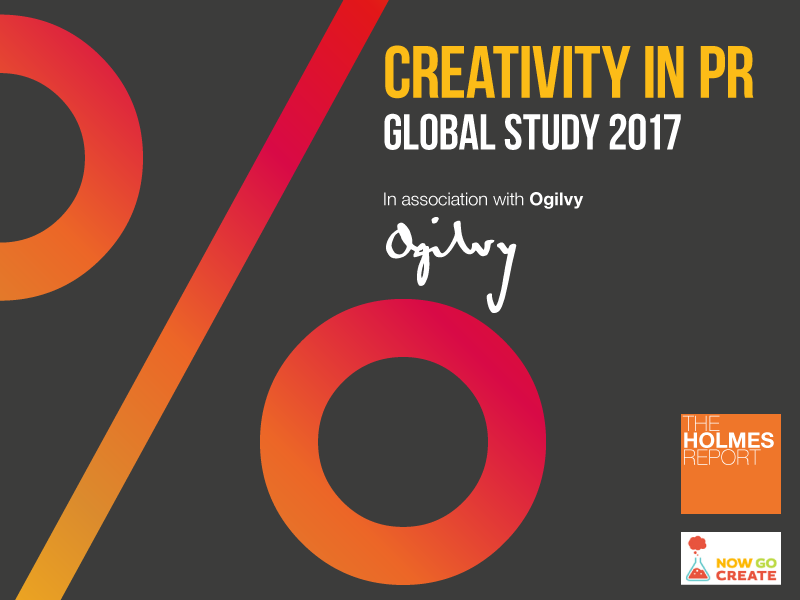 Creativity In PR 2017: The Rise Of The Creative Director

The sixth edition of the Creativity In PR study finds compelling evidence that creative directors are now calling the shots at PR firms.

The sixth edition of the Creativity in PR study reveals that the PR industry is increasingly entrusting creative directors to oversee its ideas and solutions, with a specialist role proving popular as PR firms step up their efforts to lead creative despite lingering client concerns.

The 2017 Report, co-authored by the Holmes Report and Now Go Create, in partnership with Ogilvy, is again based on a survey of agency and in-house executives from across the world.

While previous findings have focused on whether the industry has what it takes to win the 'war for ideas', this year's Report finds that PR firms are becoming ever more comfortable with the notion of a specialist creative director — marking a significant shift from when this study launched in 2012.

The Report finds that techniques for generating and evaluating creative ideas remain a work in progress and that, perhaps most importantly, the evaluation challenge continues to rank as the thorniest of all. A free PDF of the Report is available below.

"Building a culture where creativity can thrive requires the ability to build trust - between team members, between agency and client, and stakeholders. Trust has the power to unlock key factors for creativity such as the ability to take risks, to fail, to allow for debate and collaboration, and motivate teams. This requires strong leadership and the continuing rise of the Creative Director suggests that agencies are embracing this," says Now Go Create founder and co-author Claire Bridges of this year's findings.

"But this year’s results show there is still some way to go for the two sides to reach a point where there is a firm basis of trust, and the ability to take risks does not continue to pose such a barrier for creative ideas to make it from pitch to reality."

The rise of the creative director

There is a major jump in the number of agencies employing a creative director — to 56% from 37% last year, suggesting that the role is becoming a formalized position within the agency model. And there is a corresponding drop in the proportion that believes the role is not necessary (23%). 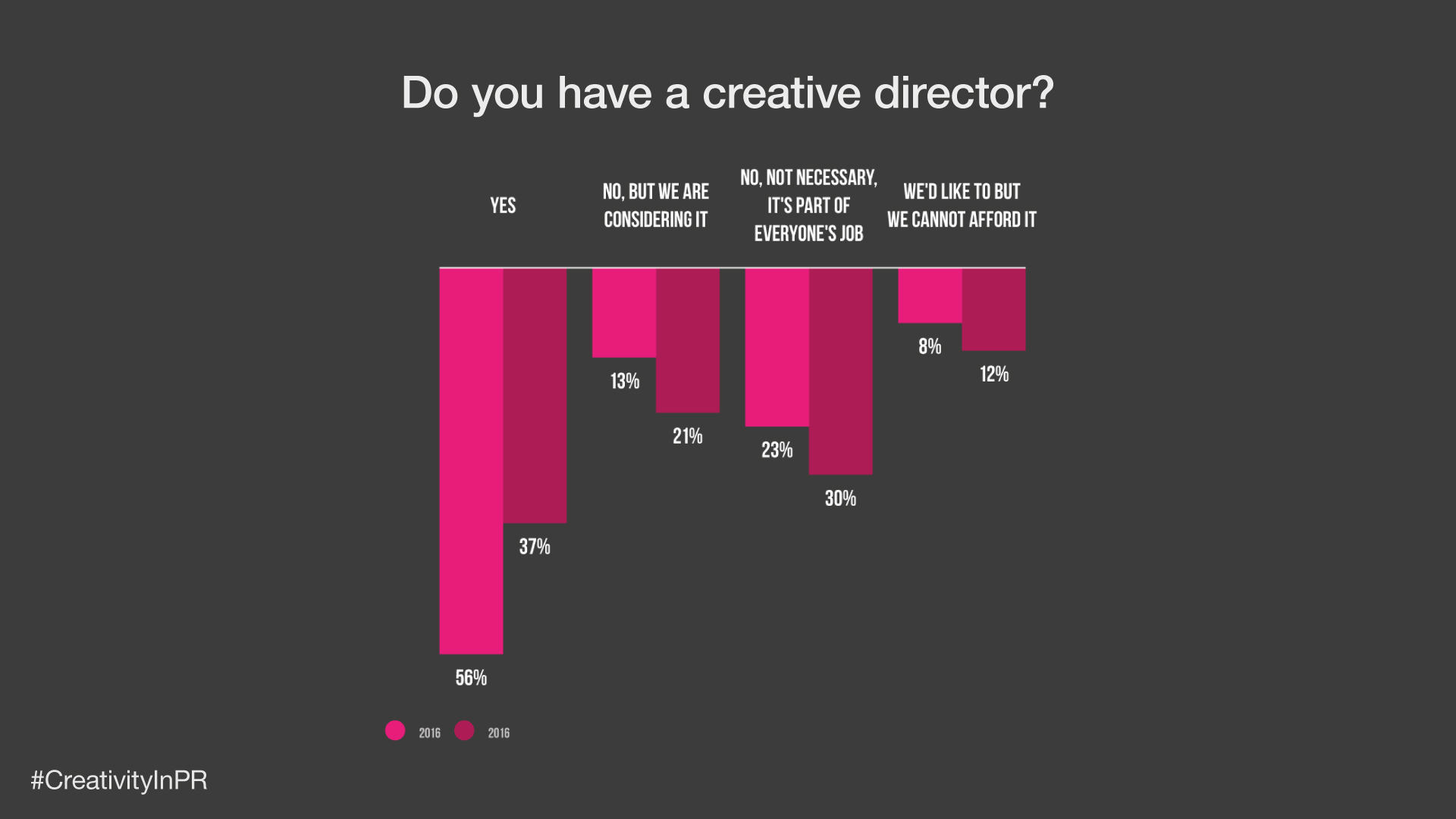 Disappointingly, though, there is no sign of positive movement in terms of the gender balance of creative directors. According to this year’s Creativity in PR study, the proportion of female creative directors has decreased to 30% this year, compared to 35% last year.

A consensus also appears to be developing about the creative director’s responsibilities within the PR agency model. Respondents again opted for campaign ideas first (84%), ahead of new business (56%), with talent and training growing to 37%. 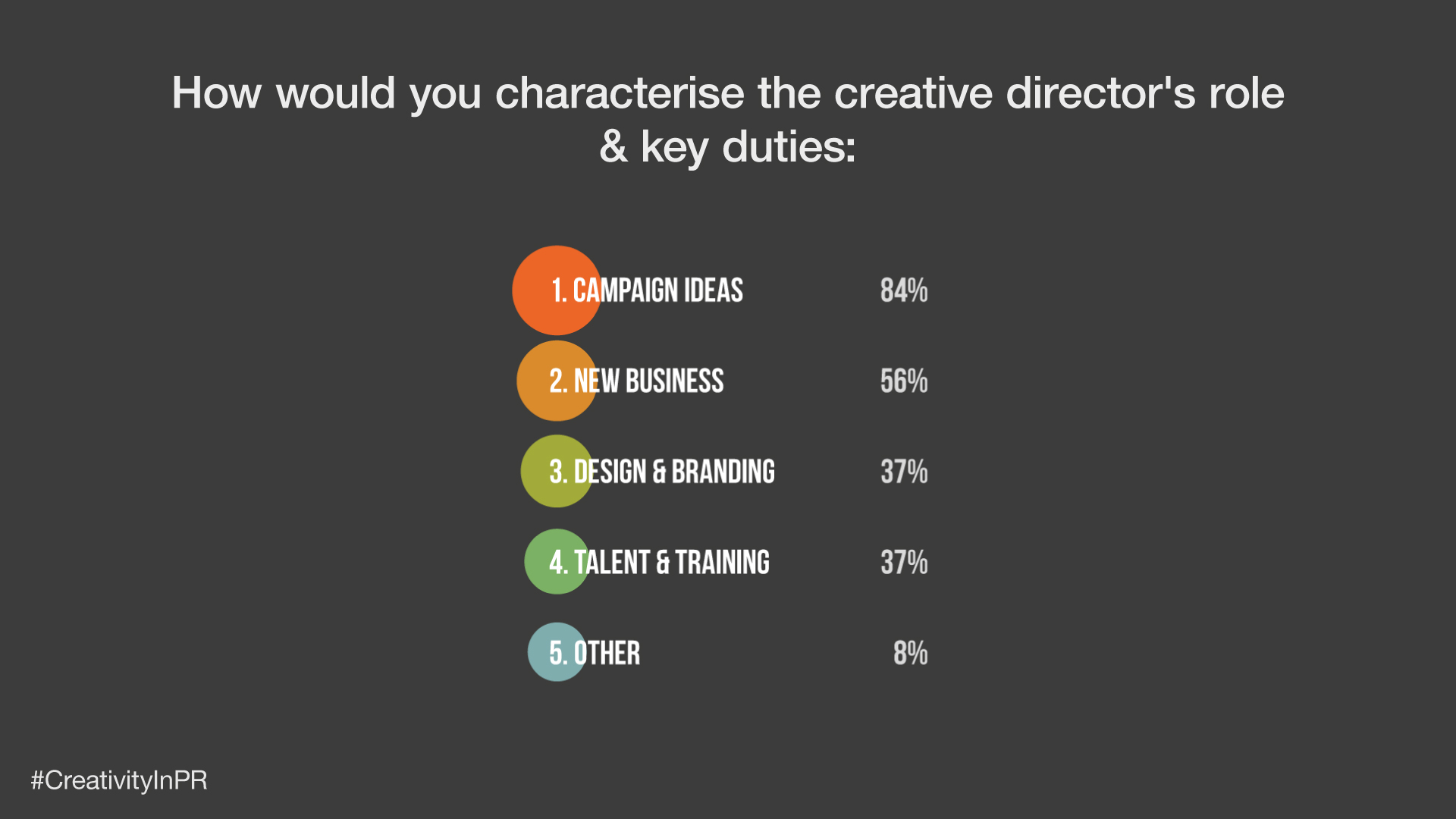 Other suggestions from respondents included: "Critical cultural role: sets the tone in empowering everyone to be creative," although not everyone is convinced — "No idea. Very few people have ever met him." 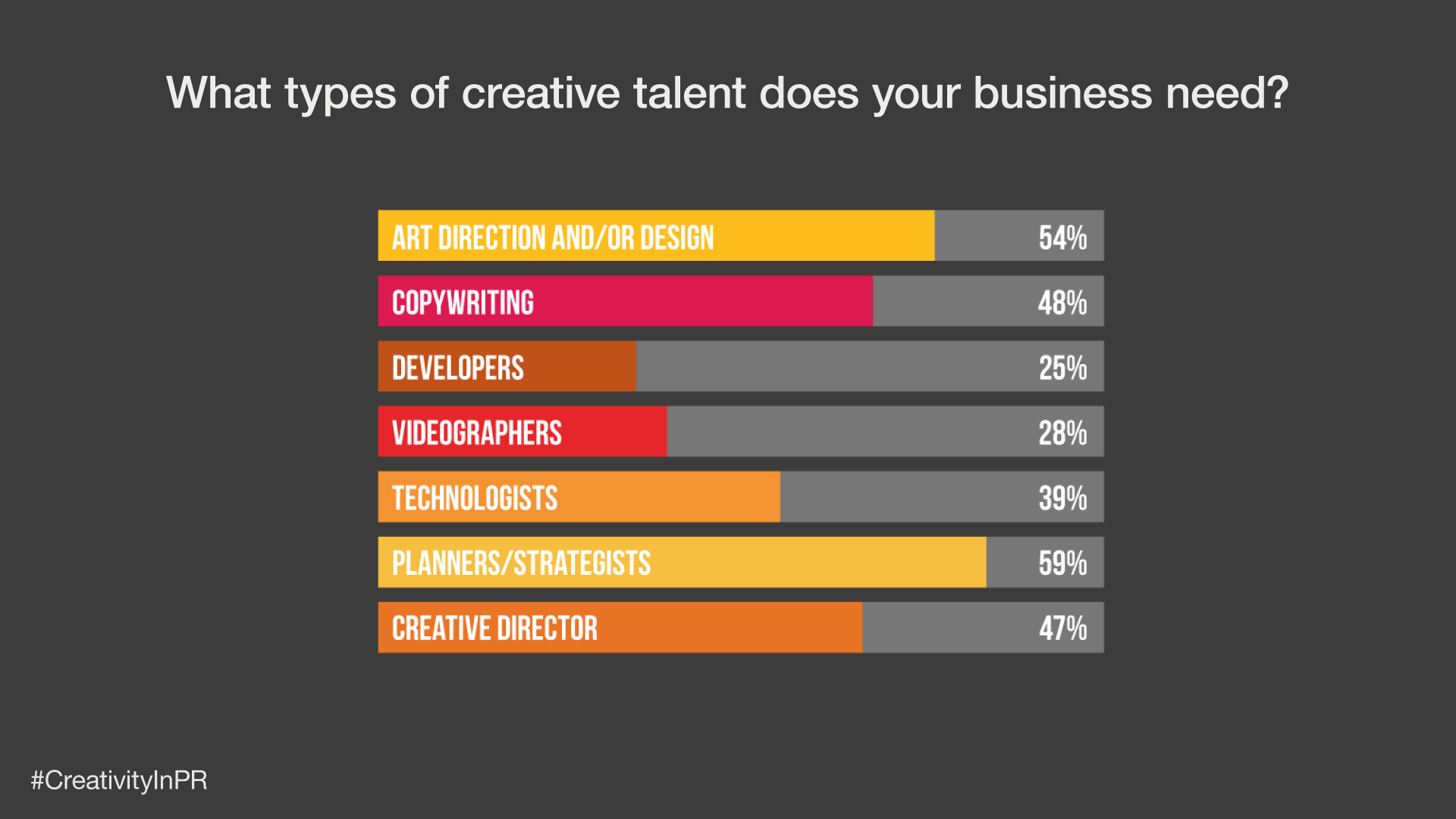 Planners remain the most sought-after type of creative talent, perhaps because of the challenges the PR industry has faced in terms of incorporating this service into their model. They are followed close behind by art direction and/or design, reflecting the visual times in which we live. Of note, there is a big jump in the need for technologists. 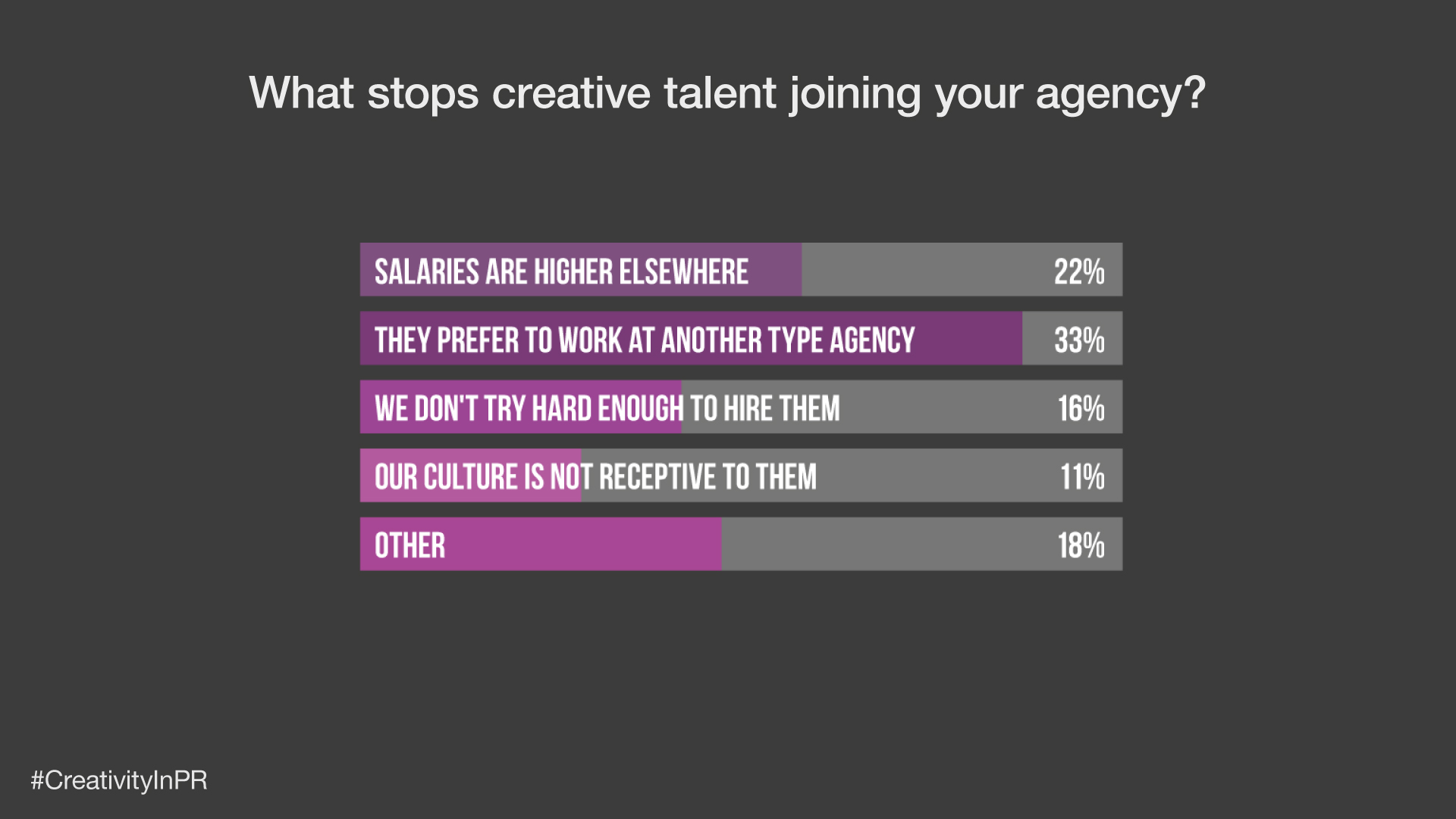 One of the challenges often raised by PR firms revolves around their ability to attract the best creative talent. Accordingly, we again addressed this issue, with more respondents (33%) again stating that creative talent prefer to work at another type of agency, presumably in a competing discipline. Meanwhile, salaries (22%) overtake other concerns when it comes to posing a barrier to hiring creative talent. 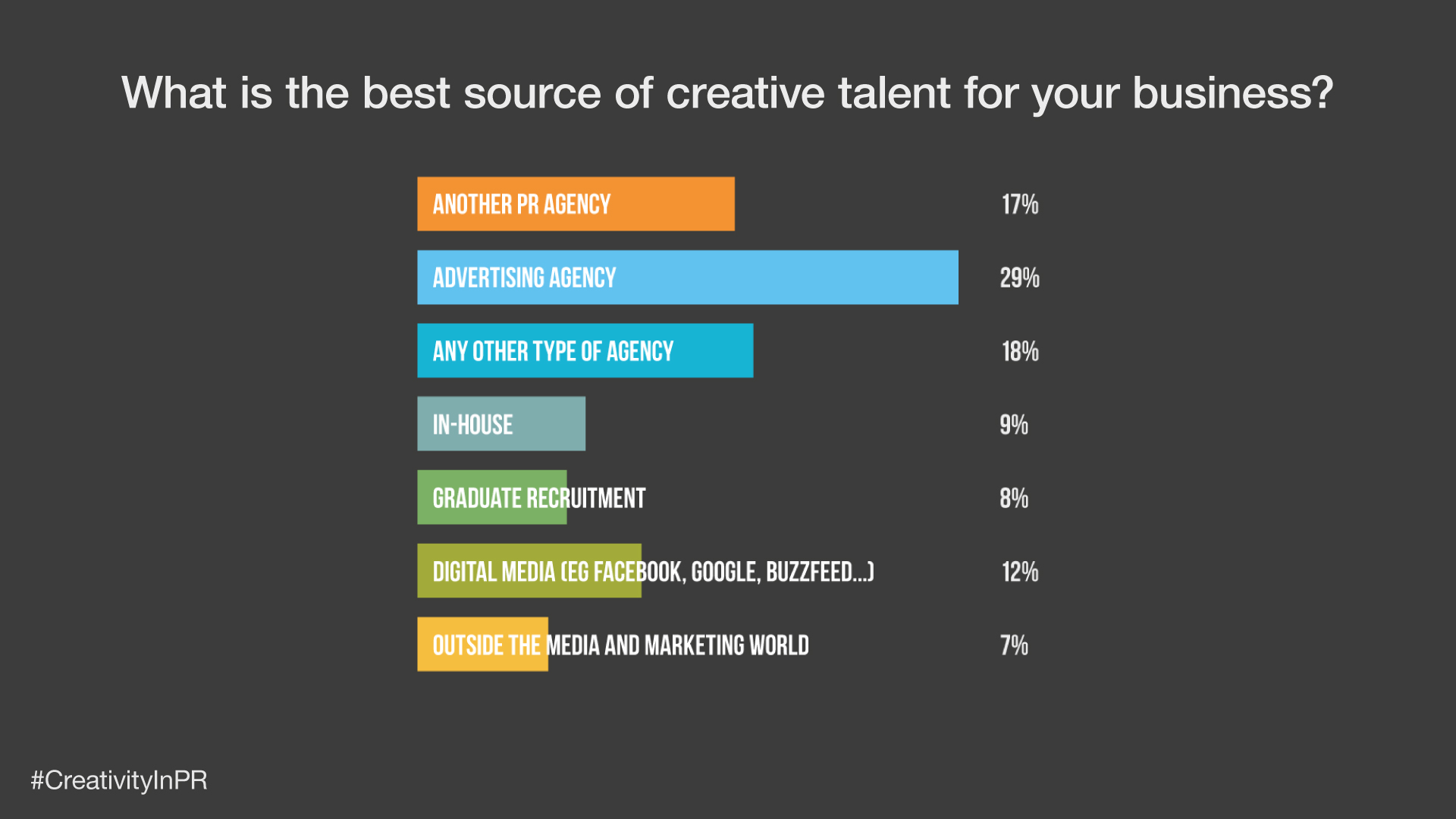 When asked to list the top sources of creative talent for their business, 29% pointed to adland, ahead of other non-PR agencies (18%). Only 17% find the creative talent they need at other PR firms, while 9% hire from in-house and 12% from digital media.

The barriers to retaining creative talent are the need for variety (45% want to work at a different type of agency), salary (42%), lack of career development options (27%) with 23% agreeing that the culture is not receptive, up 8% on 2016. 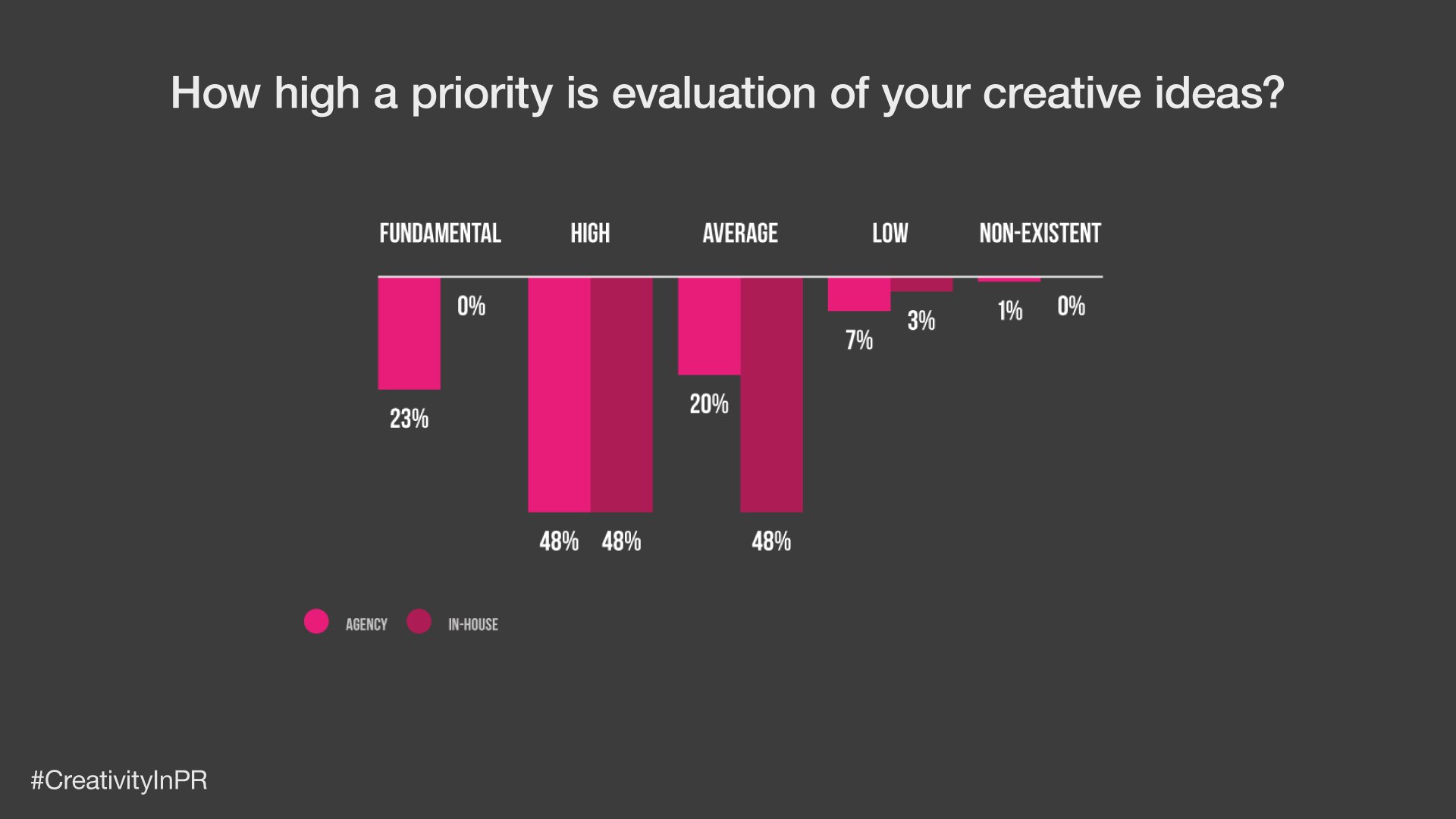 "Given the data-driven environment we now operate in and the overwhelming agreement that the industry must move beyond AVEs it seems remarkable that 50% of in-house respondents rate evaluation as merely an average priority," says Bridges. "With 71% of agencies citing client risk aversion as the number one barrier to getting creative ideas away we can only assume that these 2 issues are linked. If effectiveness in terms of sales, reputation, behaviour change or other relevant measures can’t be measured then it won’t be valued, undermining any credibility in the idea."


Creativity in PR 2017 from The Holmes Report