Please refer to our Privacy Policy for important information on the use of cookies. By continuing to use this website, you agree to this.
Home Longreads Creativity In PR Study: Talent, Triggers & Techniques In The Lockdown Era 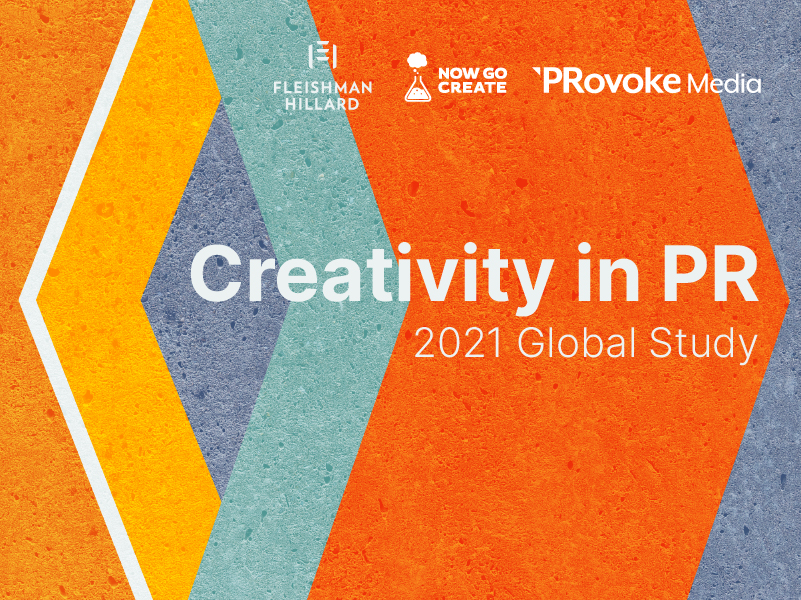 The seventh edition of the Creativity In PR study examines the lessons the PR industry has learned from the lockdown era, and also shines an uncomfortable spotlight on diversity and inclusion in creative roles.

Authenticity emerges as the top driver of great PR work in 2021 according to the seventh edition of the Creativity in PR study, which explores how the sector has risen to the unique creative challenges of the Covid-19 era.

The 2021 Report, co-authored by PRovoke Media and Now Go Create, in partnership with FleishmanHillard, is based on a survey of more than 300 agency and in-house executives from across the world, which took place earlier this year. The full report is available below. 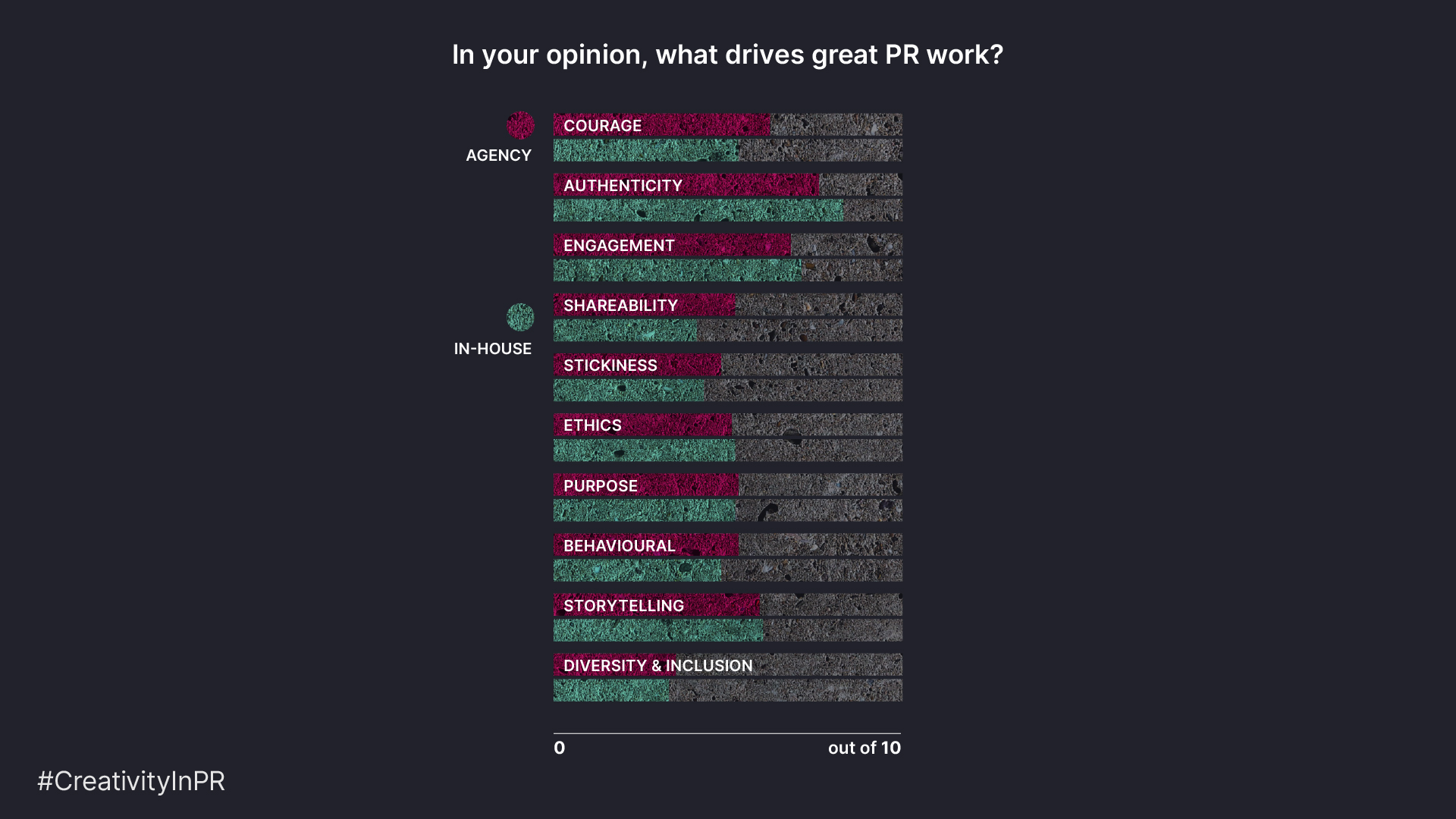 The consistency in choices, particularly around ‘authenticity’, probably reflect the unique pressures of the pandemic — companies are expected to demonstrate genuine empathy, rather than empty rhetoric. The same probably goes for ‘courage’, given the challenges that society has faced over the past 18 months.

"Creative that powers great PR work grounded in these values isn’t surprising," explains Lesley Backus, senior partner in creative strategy and planning at FleishmanHillard. "But it requires us to think about them in new ways. The courage of the idea but also the courage to bring clients along on that journey. Courage is multi-dimensional, requires us to first confront all truths about the issues and the barriers. And it requires courage on the part of both agency and client.

"An exclusive focus on storytelling is PR of the past," continued Backus. "Great PR work can’t be measured by just the “quality” of the stories we tell, but by the courage of the stance we together – agency and client – take every day in bringing true stories to life." 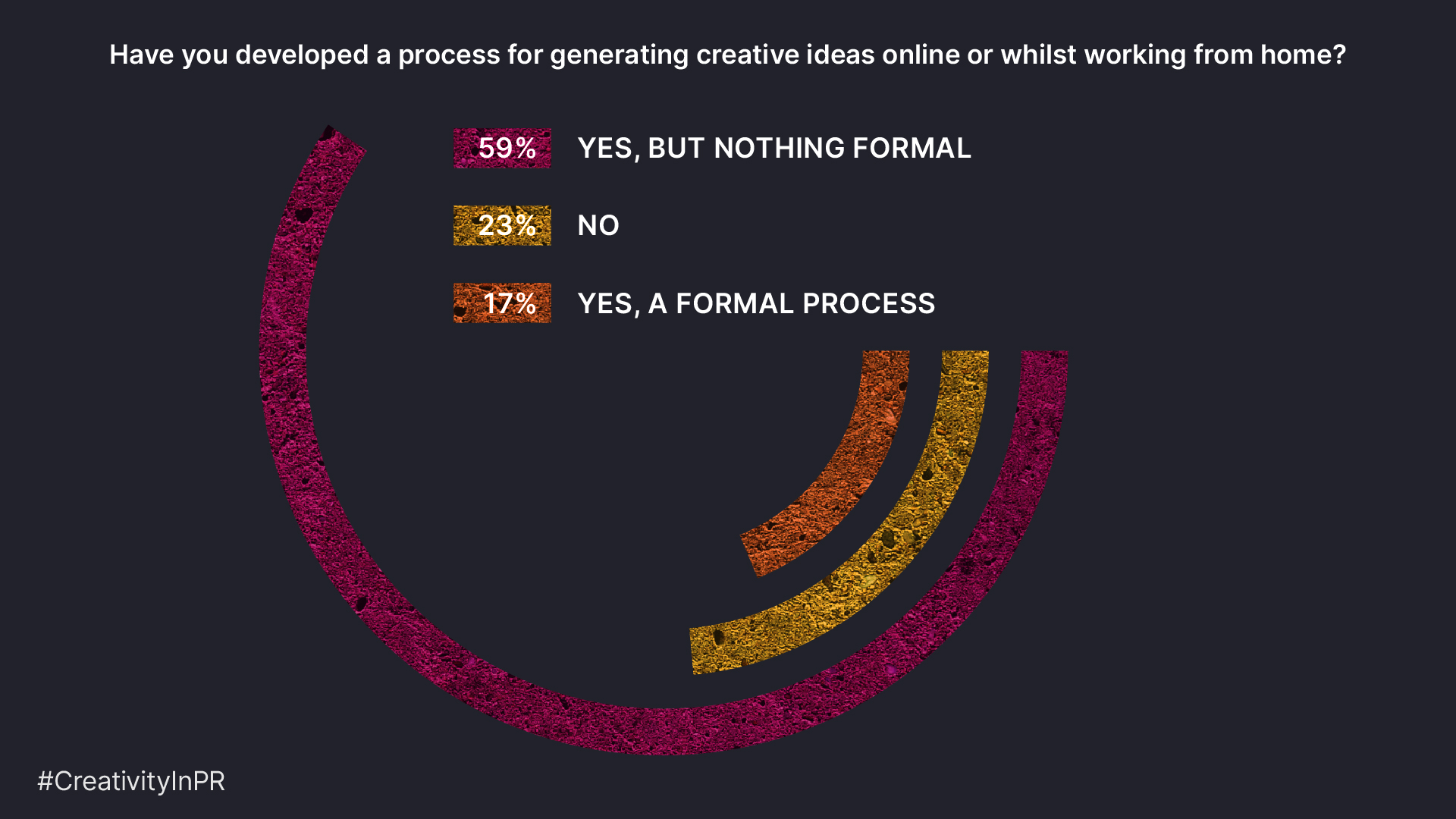 The report also explores the how creative process and practices have changed during the lockdown era. In most cases, some kind of process has been developed so that PR creatives can ideate and collaborate remotely – but for the majority of agencies (59%) this has developed in an unstructured manner. 17% of respondents say that their company has ironed out a new way of working, while 23% have not instilled a process.

"Whilst PR’s are great at thinking on their feet and responding to fast-moving agendas, it’s surprising that 23% have been winging it for the best part of a year," says Now Go Create founder and Creativity in PR co-author Claire Bridges. "Creativity needs process as much as it needs serendipity and imagination to deliver ideas consistently. Leaving it to chance is not a great option."

Online meeting apps take top spot as a creative collaboration tool, but 30% of respondents work alone and then come together in pairs or wider groups. While only 7% say their virtual collaborations and reliance on digital comms has been extremely effective, more than 80% have seen at least some merit in it. Less than 2% saw their enforced new way of working as a complete creative disaster, with one respondent even writing that "collaboration online is more efficient than in person." Many, however, told us they miss serendipity and physical interactions.

As people begin returning to offices, almost three quarters of respondents say they will go back to group brainstorms – and, presumably, the many other forms of in-person idea-generation methods that they use. “Brainstorm-bashing is a popular PR sport, but it doesn’t seem that anyone has necessarily found better ways to tap into collective ideas," says Bridges. "Covid has shone a light on the fact that facilitation should be a core competency for anyone involved in the creative process." 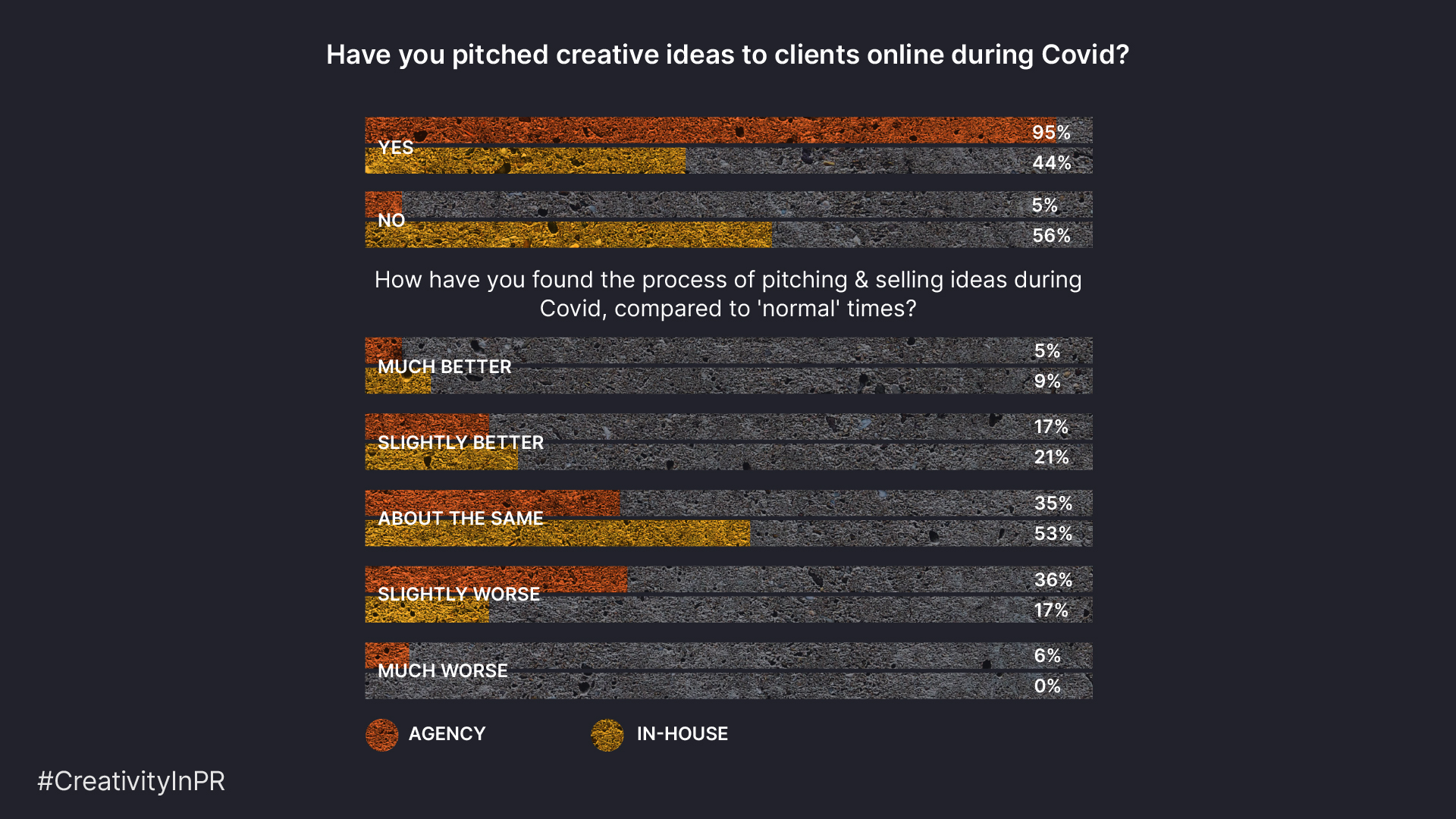 Unsurprisingly, the vast majority of agencies (95%) have pitched creative ideas to clients online during the pandemic, but are not especially keen on the practice. Around a third (35%) rated online pitching as ‘about the same’ as pitching and selling ideas pre-Covid, but 42% said it was either slightly worse or much worse. 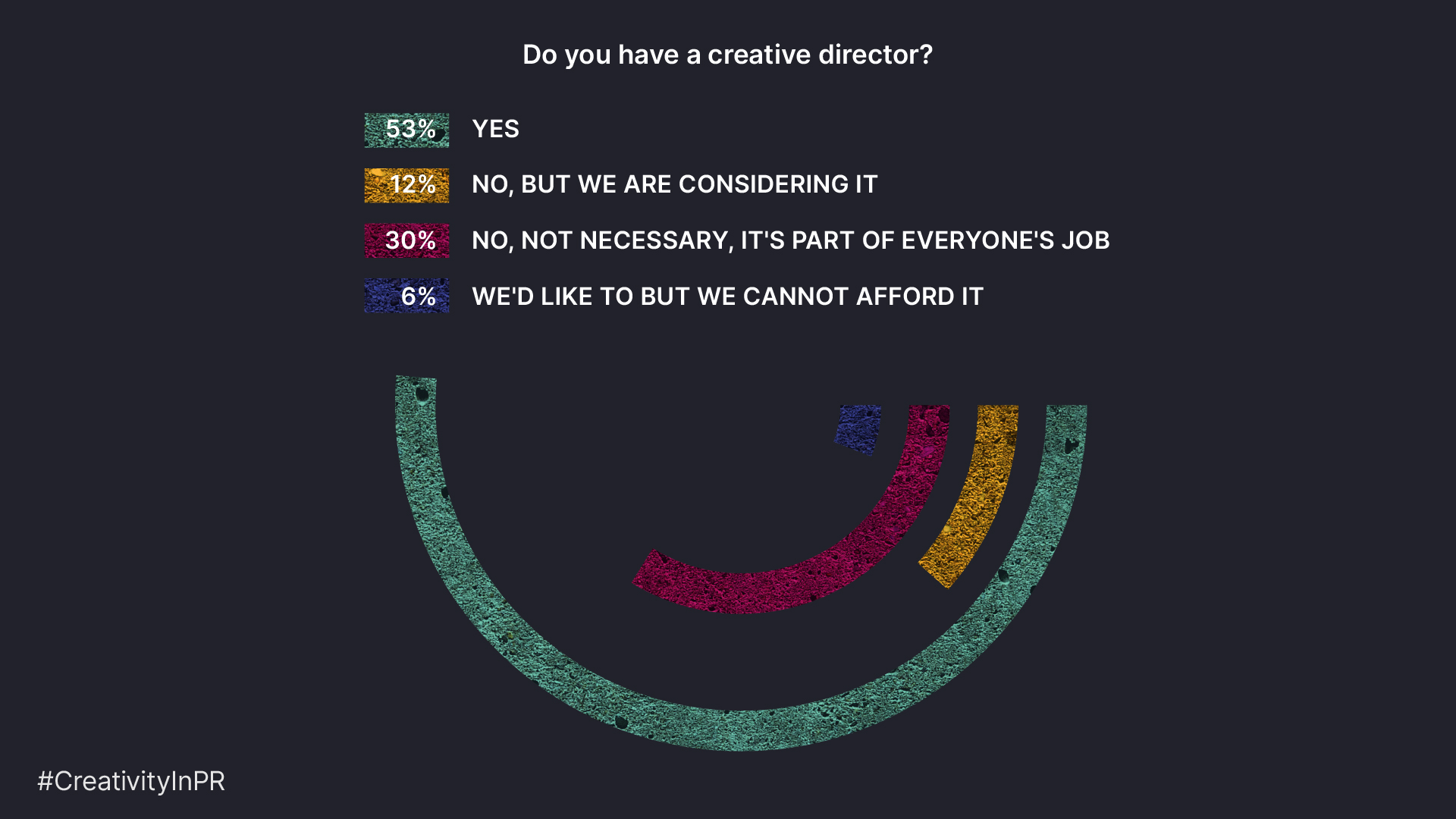 As usual, the Creativity in PR study examines the rise of the creative director, one of the key findings from the last report in 2017. In 2021, 53% of respondents have a creative director, holding more or less steady with the 56% recorded four years ago. Almost a third (30%) believe the role is unnecessary, an increase on 2017 (23%), perhaps pointing to how the creative director position has evolved in the PR world. 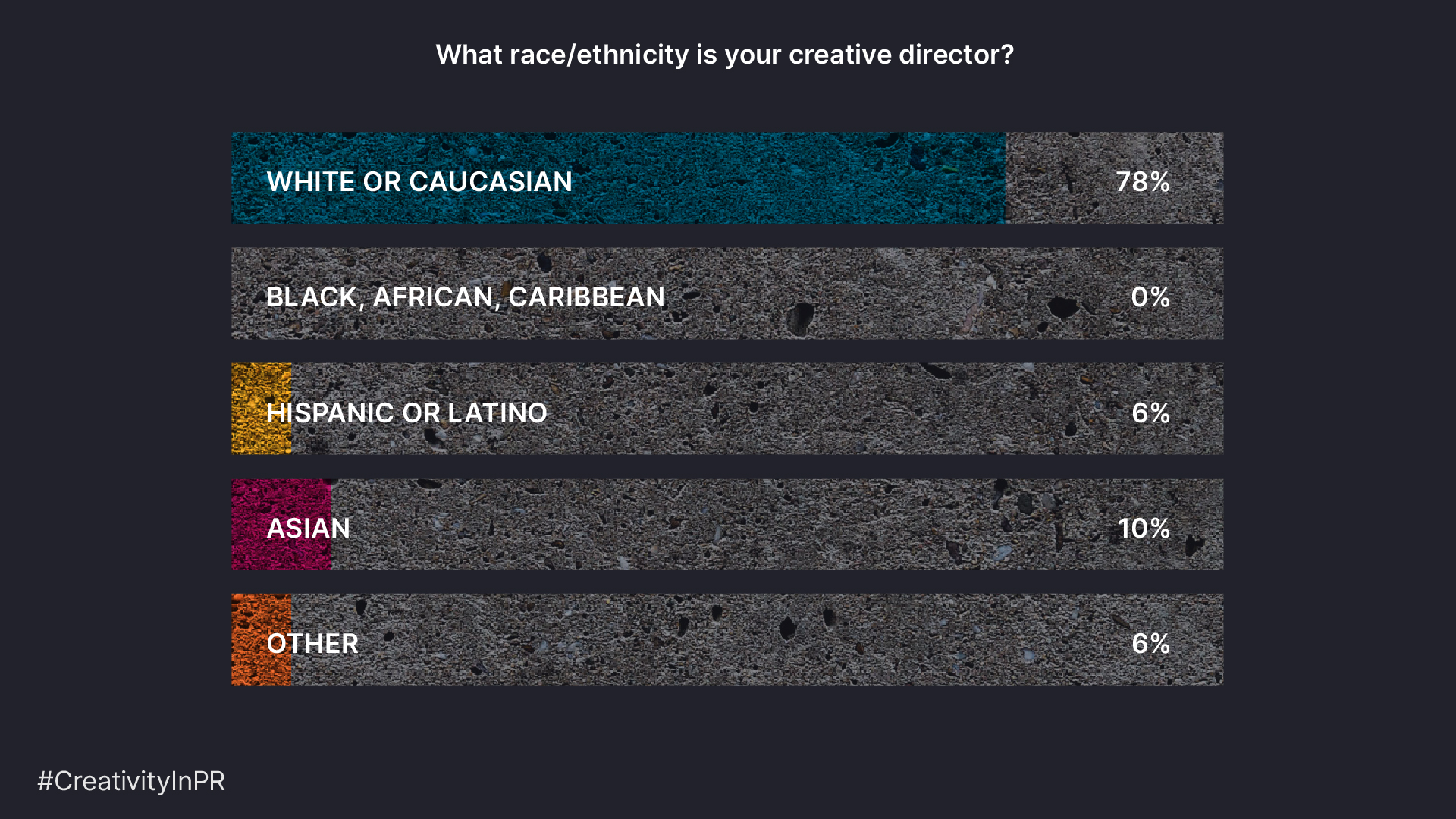 For the first time, we also explored the race/ethnicity of creative directors. To little surprise, the discipline is overwhelmingly white (78%), and, of even greater concern, not a single respondent works with a Black creative director. “It doesn’t matter” said one agency respondent, despite the industry’s glaring struggles with diversity and inclusion.

These findings come after the study launched by revealing the higher priority creativity has taken on during the past 18 months, before finding PR firms making encouraging progress in the 'war for ideas'.

All findings from this year's study, covering such areas as remote working, talent and today's drivers of great creative work, can be found here, while the full report is available below.