Please refer to our Privacy Policy for important information on the use of cookies. By continuing to use this website, you agree to this.
Home Latest Carrie Lam Blames "Obsolete PR Machinery" & "World Class Propaganda" For Hong Kong Unrest 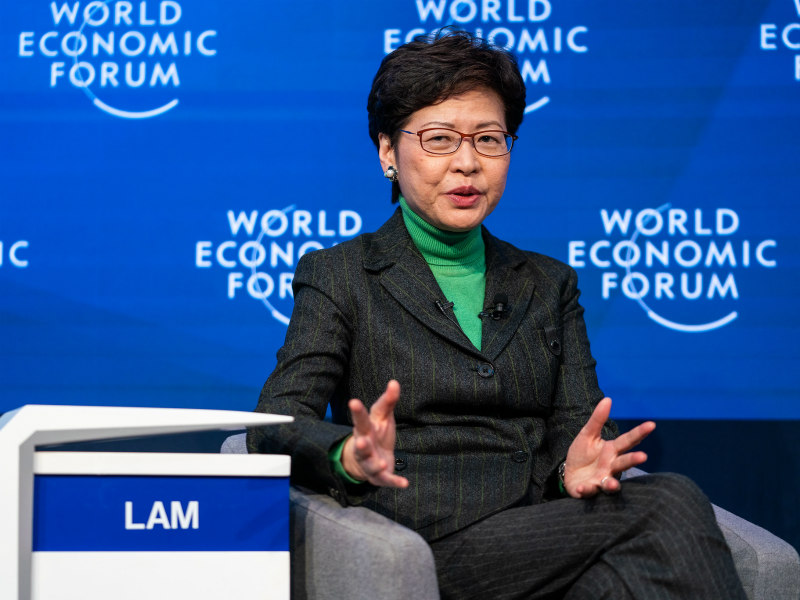 Speaking at the World Economic Forum, the Hong Kong chief executive said the failure of the controversial extradition treaty was partly down to "world-class propaganda".

Lam made the comments at the World Economic Forum in Davos yesterday, during a conversation with CNN's Fareed Zakaria. The proposed anti-extradition law has sparked massive unrest in Hong Kong, and has effectively made Lam's government the most unpopular in the city's history.

"I’ll confess it’s now proven to be a political failure," said Lam of the law. "Partly because of the failure of the very obsolete PR machinery of the Hong Kong government when faced with world class propaganda."

Lam's remarks come after a fruitless search for PR support that saw eight PR firms turn down the opportunity to work for the Hong Kong government. More recently, a US PR firm has been sought to help "inspire and enhance confidence" in the beleaguered city's prized reputation as a global business hub.

Lam did not detail the nature of the "propaganda" facing the Hong Kong government, but again hinted that "outside forces" are to blame. "I never pointed the finger at any outside parties. I’m not drawing a conclusive decision out of that. But, something that is quite domestic in Hong Kong has attracted quite a lot of external attention."

Lam also said that she had resisted pressure to clamp down on Hong Kong's journalists. "It’s very important to ensure the media is as free as possible to report. I face a lot of pressure from the anti-protestor camp that I should control the journalists. I’d rather not."

But Lam showed little sign of bowing to the public's demands, which include an independent police enquiry, universal suffrage and her own resignation. "I've learned a lot. When I was asked to resign, I said, can I hang on to put into practice what I've learned?"

"We've perhaps not done enough in terms of educating young people and addressing grievances," she added. "It would be very easy to just run away from a situation. It's very difficult to govern and implement policies. For those who understand the political structure, leaving that position vacant would only create more confusion."

She also said that the government will soon announce "an independent review committee to look into the causes of this unrest," which will include an examination of the one country, two systems model. "We continue to engage with the people," she claimed.

Lam's comments are unlikely to deflect the fierce criticism that her leadership has attracted. And she said little to suggest that a solution to Hong Kong's impasse is forthcoming. "It will depend on how the majority of Hong Kong people feel about Hong Kong. Hong Kong is a wonderful place. If Hong Kong people have that same feeling and don’t want to see Hong Kong deteriorate, then I think we have a better chance to chart a way forward. I’m not suggesting the government does nothing."

While noting that China President Xi Jinping was "definitely" committed to the "one country, two systems" approach, Lam also suggested that the system could continue beyond its 2047 expiry date if it enjoyed the support of the central authorities and Hong Kong's people. "Why change it?"

Asked by Zakaria what her message to Hong Kong's protestors is, Lam said: "Treasure Hong Kong. Don't destroy it."

Washington Post columnist Ishaan Tharoor described Lam's performance as "wooden" and self-congratulatory. "Lam showed little to no sympathy for the protesters’ demands for meaningful political change, including the implementation of universal suffrage in the city — as opposed to the current system, which is engineered to give Beijing domineering control over the local government," wrote Tharoor. "Lam also specifically rebuffed protesters’ calls for amnesty for those arrested in police crackdowns and said nothing of the numerous incidents of armed mobsters attacking protesters."