Please refer to our Privacy Policy for important information on the use of cookies. By continuing to use this website, you agree to this.
Home Latest Rough Justice: Met Fails Ultimate Public Relations Test 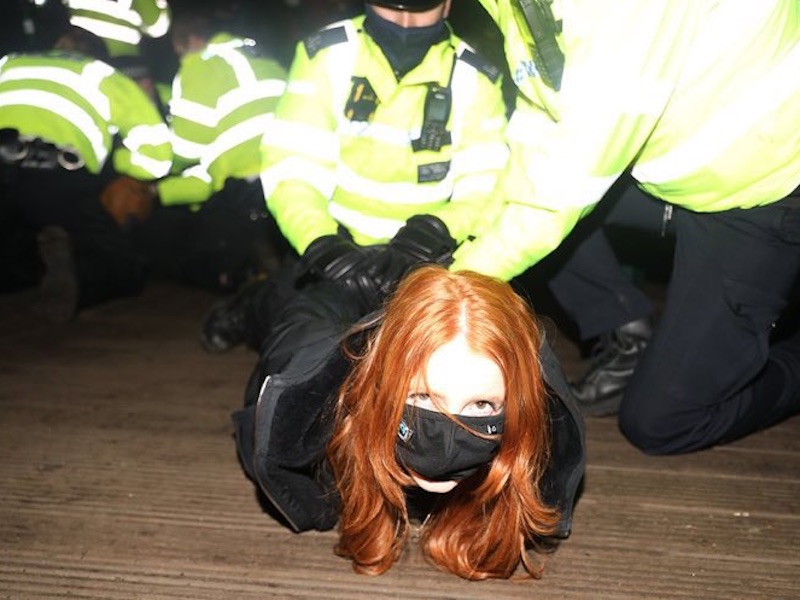 After a UK police officer was charged with the murder of Sarah Everard, the Met's treatment of women at her vigil was more than "just a PR fail".

Last weekend, men were violent towards women at a vigil to remember a woman who was the victim of male violence. That in itself would be enough of a bad circular joke. The punchline gets darker, however, when we widen the aperture to reveal we’re talking about male Metropolitan Police officers manhandling women laying flowers to remember a woman who was killed, while walking home in South London, and that a male police officer has been charged with her murder.

Many people will share my visceral anger and distress when I first saw the shocking pictures and video of police officers dragging women from the bandstand on Clapham Common (pictured), where Sarah Everard had gone missing days before it was confirmed that she had been found dead.

It’s hard to describe how personal, and painful it felt, at the end of a week where Sarah’s disappearance and death had triggered thousands of women to share their own stories on social media about male violence and harassment, about how we have normalised constant vigilance, personal risk assessment, a whole range of evasive and protective actions, just to be safe while doing something as normal as walking home.

I don’t think I’ve had a single conversation with a woman over the past week that wasn’t full of shock and resonance. Especially, perhaps, those in PR and marketing, for whom Sarah’s story was even more poignant because she was also just a regular marketing professional, latterly freelancing at digital agency Flipside, part of Weber Shandwick. It hit many of us hard, and in the heart.

And that was before the Metropolitan Police action, where having refused to engage with organisers Reclaim These Streets, who were trying to ensure the vigil – not a protest, remember – was Covid-safe, they added insult to injury. Instead of standing by respectfully as women, for the most part masked and distanced, lit candles and placed flowers, the police closed in.

My second response, after rage, was to tweet: “Filing for our crisis management review of 2021. #PRFail.” But it’s taken a few days more to start to process what happened, and it’s clear now that’s not the full story.

The optics of the incident were appalling. The messaging and statements throughout the past week from the Met Police and police commissioner Cressida Dick have struck the wrong tone and have been seriously lacking in empathy. But true crises are never just down to poor communications, and therefore can’t be fixed “just” with communications, however experienced the counsel. They are systemic, and those within the system may be entirely blind to not just how things look, but why things need to change.

The Met Police action is a textbook example of a true PR crisis – and that’s always much more complex and layered than the common and mainstream media perception of a “PR fail”, where messaging and image management is viewed in isolation.

As crisis management specialist Rod Cartwright said of the incident: “This was not – and is not – just a PR crisis. It was, and is, a failure. An abject failure of political and policing leadership. A failure of decision-making and negotiation around a vigil that was clearly going to take place come what may. A failure to accept that vigil is a natural expression of solidarity and an important part of a public debate. A failure of policy and legislation around the right to peaceful protest. A failure, put simply, of human rights and humanity.”

Events of this nature provide an opportunity to consider why public relations should be taken more seriously, not less. In this case, the Met’s woes are directly linked to a persistent inability to listen to stakeholders, accept criticism, and improve practices, policies and behaviour. It is a long-term, systemic failure that haunts the organisation when stories like this emerge.

In this business, we all know the very best of what PR can do for an organisation, internally and externally, in terms of revenue, reputation and relationships with all stakeholders. We also know that changing behaviour and genuinely shifting values and attitudes at all levels – whether or not this is led from the comms function – is a long, hard slog, not an image makeover. And we've all experienced the frustration when businesses and organisations don't get that.

It’s important to note, in addition, that this isn’t an isolated incident. The Met has what you might call “previous” on institutionalised misogyny and institutionalised racism. And the two combined is doubly toxic.

To give just one other tragic recent example, as well as Sarah Everard, we must remember the case – inevitably with much less coverage – of two Black women. Sisters Nicole Smallman and Bibaa Henry were stabbed to death in a park in Wembley last June. Their families mounted their own search for the women when the police did not take action after they were reported missing. Two male Met Police officers were later suspended after taking selfies with the dead women at the scene of their murder and sharing them.

This earlier case present a parallel communications challenge for Reclaim These Streets and the re-emerging movement around women’s safety and freedom to move around without assault or threat of assault: this cannot only be focused on middle-class white girls. The campaigning and protests – and the vigils will inevitably become protests, regardless of UK home secretary Priti Patel seeking to give the police force even more power and introduce more draconian limitations on freedom of speech and the right to peaceful protest in the Police Bill currently making its way through parliament – must be inclusive.

In the light of all this, the UK government’s related announcement this week – Project Vigilant, a plan for plain clothes police officers to patrol UK nightclubs and bars when they reopen to protect women – seems akin to purpose-washing by a big brand. It’s either naively tone deaf, or fundamentally dishonest and misleading: gaslighting on an organisational scale.

Last week was a heavy week to be a woman. Bookended as it was by International Women’s Day and, in the UK at least, Mother’s Day, you would have hoped that it would be full of celebration for all that women have achieved, alongside acknowledgement of all that there is still to do. But the reflections of IWD this year were particularly tough: our four-part series on what the past year has been like for women in the industry, for instance, was an emotional read, as women have undoubtedly borne the brunt of Covid’s collapsing of boundaries between home, work and school.

And then, whatever you think of Harry and Meghan’s interview with Oprah and the royal rift, there was something disquieting, for me, about a woman of colour talking about her own lived experience of a mental health crisis and racism and then very publicly not being believed by high-profile white men.

We’re currently waiting for an official enquiry into the Met Police incident. It’s not lost on me that the only two people who have faced calls for their resignation – Priti Patel and Cressida Dick – are both women.

Hopefully, Sarah Everard’s death will not have been in vain. Hopefully, this will be the start of a real shift, an inflection point and the start of a movement that leads to positive change at an institutional, political and societal level. The Met Police may well feature in our crisis management review for 2021, and if so, our assessment of their handling of this moment will very much depend on what they do next, not just what they say. As the saying goes, if you put lipstick on a pig, it’s still a pig.