Please refer to our Privacy Policy for important information on the use of cookies. By continuing to use this website, you agree to this.
Home Latest Rud Pedersen Expands To Paris As European Growth Plans Accelerate 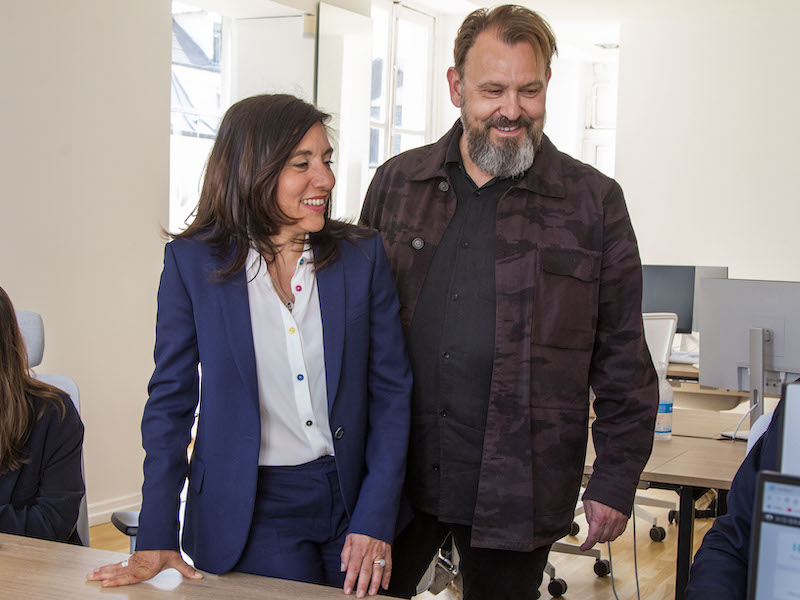 The strategic communications group has taken a minority stake in public affairs firm CNTVRS, in its first foray into France.

PARIS — European strategic communications specialist Rud Pedersen has made its first foray into France, acquiring a minority stake in public affairs and communications firm CNTVRS as part of plans to expand further across Europe.

CNTVRS was opened in December 2020 by Caroline Marchetti, who co-founded MARCC in 2012 and is a former senior executive at FleishmanHillard, Edelman and Burson-Marsteller in Paris. She will continue to lead the agency, which currently has a team of 10 and has already worked with Rud Pedersen on public affairs assignments in France.

Rud Pedersen president and CEO Morten Rud Pedersen (pictured, right), who founded the firm 20 years ago, told PRovoke Media that the intention was to grow the business together and increase its value, with a view to increasing the investment at a later date.

“Although Caroline remains the majority owner, we treat her and her team immediately as fully integrated members of our group on the same terms as our people in every 100% owned office,” he said. “This is a typical model for us, as we have also done in other European markets. It differs from the earnout models used by major competitors because we focus on real partnership to create opportunities and grow revenue together, rather than being fixated on exits and cashing out by holding costs down to hit profit targets.”

Marchetti (pictured, left) said: “As we close a fantastic first year of existence, the partnership with Rud Pedersen Group will give us access to the network of a public and corporate affairs consultancy ranking among the fastest-growing and most highly-regarded in Europe. Building on the strengths of such a solid partner will enable us to accelerate our growth and strengthen even further the services offered to our clients. This essential step will ensure CNTVRS’ robust development and long-term sustainability. It is also a great opportunity for our talent, who will be given the opportunity to travel, meet and work on exciting and complex missions all over Europe."

The new presence in France continues an active start to the year for the Rud Pedersen Group, which has so far opened in the UK, Poland, and Latvia – via a stake in Vilands Associates – and now has 450 people in 11 countries, after its early roots in the Nordic and Baltic regions.

Rud Pedersen told PRovoke Media: “Our aim is to be the biggest public affairs firm in Europe. We have a dual strategy of putting people on the ground and seeing if we can acquire. Our geographic ambition is to cover all European capitals – as well as France, we need to establish ourselves in Italy and Spain, as the next tier of expansion. We’re speaking to agencies in those markets, including opportunities in our existing networks, and we are also looking to acquire in the UK as we want to reach 20-40 people by next year.”

UK managing partner Jon Aarons joined the firm from Sard Verbinnen to set up the London office in January and has already grown the team to seven, with senior hires to be announced soon, coming from political backgrounds as well as from other established public affairs firms.

He said: “Public affairs used to be a local businesses, whether you wanted to fix legislation, sell something, or win contracts. Now it makes sense to develop into a European public affairs group because demand has changed and businesses have to have a more international, strategic approach to policy and regulatory issues, and big companies are looking for senior counsel in all their markets. We have a core competency of people who understand how politics works in the UK, and as we reach critical mass we’ll also be looking for research and corporate communications skills.”

The firm has grown by an average of 30% every year for the past five years in terms of fee income, which reached over $41.5 million at the end of 2021. Rud Pedersen said his ambitions were two-fold: “To move up the value chain significantly – because it’s more fun to advise higher-level leaders on more complex issues and it requires the sharpest brains – and simultaneously, many of the biggest companies have operations in big European cities, so it’s important to be there.”

Rud Pedersen said in recent months the firm had been doing a significant amount of work advising clients on how to handle Russia’s war with Ukraine from an operational point of view, from helping businesses to announce shutdowns of Russia operations to supporting clients who are migrating Russian employees to other European countries and helping with visas.

And he ruled out future acquisition of the firm by a US-led network: “There are 70 owners of this company and we will continue to build what we’re doing and create more opportunities to hire superior smart people into the group to help clients solve more problems. We’re very happy to be European, we thrive on cultural nuance, and we have no plans to sell to the US.”