Please refer to our Privacy Policy for important information on the use of cookies. By continuing to use this website, you agree to this.
Home Latest "This Is Smart Business, Not Woke Delusion": Edelman Defends Brand Activism 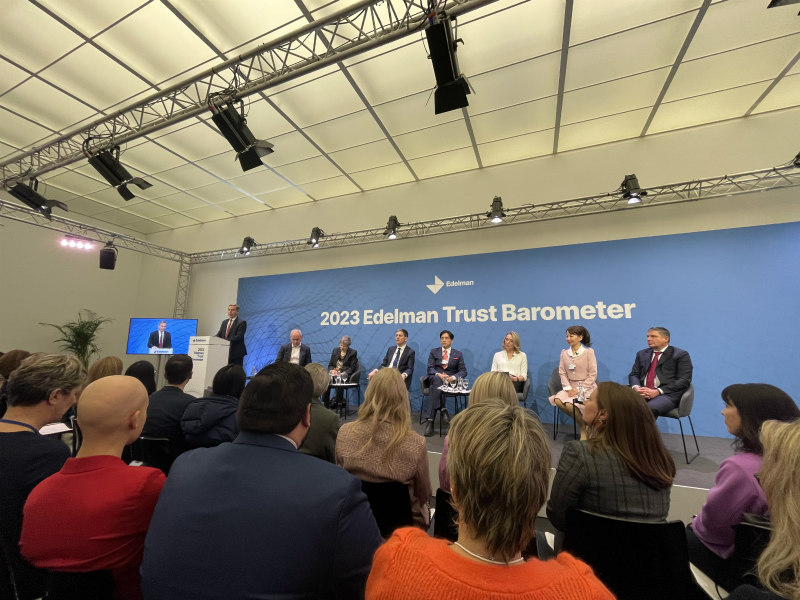 DAVOS — Business leaders cannot afford to be cowed by political backlash to their efforts to address critical societal issues, said Richard Edelman as his firm launched its 23rd Trust Barometer in Davos this morning.

"This is smart business, not woke delusion," said Edelman while introducing the findings, which conclude that business is more trusted than governments, NGOs and the media.

Edelman said that business leaders should not back off from their efforts to tackle such issues as climate change and economic inequality, pointing to Disney's experience when it opposed Florida's 'Don't Say Gay' law, which brought the company into conflict with Governor Ron DeSantis.

"Don't back off because of Disney and Governor DeSantis," he said. Business has to lead in areas of comparative advantage. We have to restore economic optimism. We have to get hope back into the system. We have to help repair the societal fabric, we have to stand strong against political pressure."

Edelman also called on business to pull their advertising dollars in order to hold divisive media forces accountable. And he warned that the multitude of ESG standards — more than 180, globally — "is ridiculous".

"We need to come up with one measure for ESG," said Edelman. "Business will be eaten by politicians if we have such a wide range of ESG measures."

"Since business is the most trusted institution, there's a big demand on business to do more," said Edelman. "85% tell us they want CEOs to take a public stand. There's tremendous pressure on companies to speak to their employees and for their employees."

Edelman's remarks come amid a sustained backlash against ESG. Meanwhile there has also been heightened interest in Edelman's own work for major energy companies, thanks to the Clean Creatives campaign. The firm reiterated that it will not work for clients that fail to meet a series of criteria on climate action, as it recently did from Standard Bank in Africa.

Speaking on a subsequent panel discussion, International Rescue Committee CEO David Miliband pointed out that the business world's focus on solutions has helped it preserve trust, compared to other sectors.

Even so, Baker Hughes CEO Lorenzo Simonelli admitted that speaking out on social issues remains a challenge for business leaders. "As the CEO of an energy tech company, we've got to be selective," he said. "You do want to make sure you don't get into politics. Business can come to the forefront by being very clear on the truths with certain subjects."

"I also think we have to be careful that we don't overstep," added Simonelli. "There is a role for politicians and other stakeholders and, in the end, they have a bigger impact on societal problems and how societies think."

"If you don't tell the difficult truths, you're going to end up not being able to deliver and then you have to explain that," said Clark. "We're hiding the problem."

From a political perspective, that requires looking inward as much as outward, said Miliband, while also being aware of the importance of fairness.

"The challenge of telling the truth is not just to the electorate," said Miliband. "There's also a challenge within the political party. There's a responsibility on parties in the way they are put together. Truth is one thing, but if it's not underpinned by fairness in the actions you are taking, you're not going to win the argument."