Please refer to our Privacy Policy for important information on the use of cookies. By continuing to use this website, you agree to this.
Home Latest World PR Report: “Global PR Is Roaring Back” 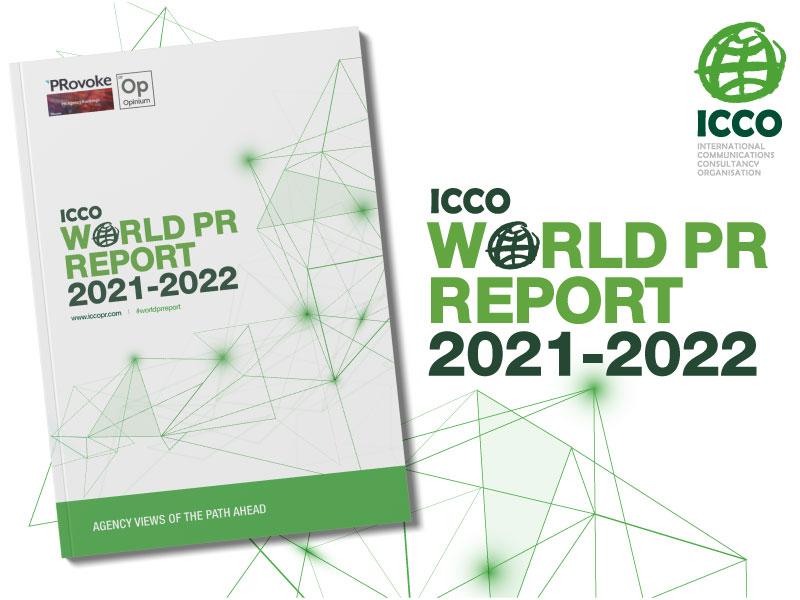 The study from ICCO with Opinium and PRovoke Media finds global agency heads are optimistic about profitability, but challenges remain.

LONDON — The global PR industry is “roaring back” in year two of the pandemic, with global agency heads overwhelmingly optimistic about profitability, according to the World PR Report.

The 2021 report, by the International Communications Consultancy Organisation (ICCO) in partnership with Opinium and PRovoke Media, gives a snapshot of the global PR landscape, revealing the issues, trends, and opportunities for agencies across seven regions.

This year’s research finds a global industry confident in its recovery, with expectations for a more profitable year rising by almost 50% compared to last year’s report and – while 79% of nearly 300 respondents said the pandemic had had an impact on their agency’s client fee income in the past 12 months – 95% of are expecting an increase in client income. Expectations for profitability are especially high in North America, Asia-Pacific and the UK.

When asked to express how optimistic they were about the growth of the public relations market on a 10-point scale, PR leaders revealed a global average of 7.3 out of 10, with levels of optimism particularly strong in Asia Pacific, at 7.8.

The report – which features the Provoke Media Global 250 Agency Ranking – also drills down into the areas of practice triggering market growth. The leading growth sectors remain the same as last year, with IT and technology, healthcare, and financial and professional services as the top three.

Corporate reputation, purpose and CSR and strategic consulting were named as the areas where the highest growth was expected over the next five years, with strategic consulting seen as the most important future skill set for PR professionals (cited by 45% of respondents). Other prominent future skills were measurement and evaluation (35%), research, insights and planning (32%); creativity (32%) and crisis counsel (30%).

The report also confirmed the dominance of digital: three of the top four areas PR firms plan to invest in are digital (social media management, multimedia content creation and influencer communications), while artificial intelligence is deemed the most important technology for PR businesses in the future.

Opinium chief executive James Endersby said 2021 has been a year of success for many within the PR industry: “Over half are expecting to close off the year with growth in client income fees, which is a stark contrast from last year in the midst of the pandemic where 61% were expecting a drop. Furthermore, there has been some positives coming out of the pandemic for PR firms across the globe, with two in five seeing it bring about new opportunities (39%) and a quarter experiencing increased business (24%) as a result.”

ICCO Chief Executive Francis Ingham said the report findings showed a “resurgent industry that was growing again, having proved that its fundamentals were absolutely sound. They also show an industry that continues to have the best of both worlds – old school skills are still heavily in demand, but insight, corporate reputation management, and strategic counsel continue to power ahead.”

The report was not all positive, however. Only 48% of global PR firms offer formal mental health and wellbeing support to staff – dipping to 29% in Eastern Europe and rising to 76% in North America –  and there has been minimal progress made in the PR workforce reflecting the society it operates in, especially in North America and Latin America.

More than half of respondents (52%) said retaining key talent is now the biggest industry challenge, with 29% saying finding diverse people was a challenge. However, there is little apparent change in where new recruits are being sourced from: 61% of respondents said they would be looking to hire from other agencies, 48% from graduate programmes, 46% from journalism; 30% from advertising and marketing; 19% from in-house communications departments; 19% from research and analytics and 7% from other professional services.

Commenting on the diversity aspects of the report, The Purpose Room founder Sudha Singh said that, while it was important to bear in mind that different areas of the world had different priorities in terms of DE&I, “this has been a time for the sobering realisation that we are failing abysmally on representation, equity and inclusion, and the consensus all around is that it will require transformative changes if we are to build a fairer industry.”

In terms of measurement, global use of AVEs continues to decline, but 52% of ICCO’s survey respondents still state that they use AVEs, despite all the education work that has been done in the industry by AMEC, the PRCA and ICCO to eradicate the metric.

AMEC chairman Richard Bagnall was typically exasperated that the metric still features at all: “AVE has been globally acknowledged as an ‘invalid metric’ that is not worth the paper it is written on. For a sector that knows how important ethical behaviour is, its continued widespread use in PR agency is simply not good enough. To blame its use on ‘client demand’ –  which 38% of the respondents have done in this report – is not acceptable. Where is the courage to take an ethical stand and a strategic consulting position and advise the clients that are asking for it that it is a waste of time and money?"

Ingham admitted the industry still faces substantial challenges: “Against the backdrop of such positive news, it is of course important to be realistic. Challenges of ethics, fake news, talent, mental health, and diversity remain. And sadly, while our industry is recruiting again at scale, there will be practitioners reading this report who lost their job and who are yet to find a new one; agency owners and managers whose agencies didn’t make it; people who have been scared mentally by this period. But to them, I would say that I hope the picture painted here provides grounds for optimism about the future.”