Please refer to our Privacy Policy for important information on the use of cookies. By continuing to use this website, you agree to this.
Home Longreads 2019 Agency Rankings: Global PR Industry Growth Holds Steady At 5% 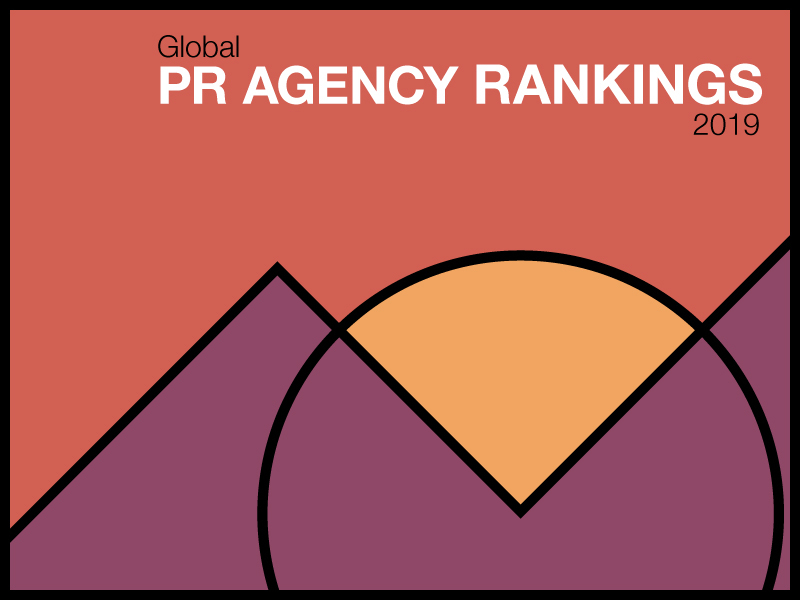 The Holmes Report unveils its ranking of the world's top 250 PR firms, revealing a second consecutive year of slower-than-expected growth.

The global PR industry grew by 5% in 2018, based on the Holmes Report's definitive annual ranking of the world's top 250 PR firms, which is now live.

The Global Top 250, which provides the clearest picture available of global PR industry size and growth, is based on submissions from more than 400 PR firms across the world, along with revenue estimates for those firms that chose not to submit.

“This is the best growth we have seen from the world’s biggest PR agencies in some time,” said Paul Holmes, founder of The Holmes Report. “There are a number of reasons, including strong years for some big players, the restructuring at Ogilvy — which brought together a lot of PR and influencer work from around the group — and the growth of specialist player Brunswick and disruptive Chinese company Blue Focus, breaking into the top 10 and shaking things up.”

Accounting for the numerous firms that reported outside of the Top 250, along with the vast number of smaller firms that do not provide revenue figures, the Holmes Report estimates the size of the global PR agency industry at $15.5bn, up from $15bn in 2018.

Meanwhile, the 'floor' for the Top 250 rises marginally, from $4.8m last year to $4.9m this year reflecting both growth and the popularity of the ranking with firms from across the globe.

A stronger US dollar hampered the many firms that report in non-USD currencies. Accordingly, USD growth for the Global 250 only reached 5.3% last year, compared to 5.1% in 2017. Constant currency growth, however, increased to 9.7% compared to 5.1% in 2017, based on a like-for-like comparison of those firms reporting fee income for 2018 and 2017.

This figure, though, remains somewhat misleading as it does not take into account the disproportionately high number of firms that chose not to report their revenue this year. Significant players that are 'missing in action' this year include Instinctif Partners, Kreab, Rud Pedersen, Exposure, Iris Culture, Maitland, TRACCS, RF|Binder, Peppercomm, Catalyst, Nebo and ROI.

"When firms decline to report revenues, it’s rarely a sign that they enjoyed a successful year," said Holmes. "It’s clear that while some firms continue to perform strongly, others were victims of the disruption that is increasingly roiling the industry. If there’s a word for the industry’s performance in 2018, it’s probably ‘uneven.’"

While fee income has been estimated for several of these firms, it is difficult to avoid the conclusion that firms are aiming to avoid public scrutiny of their numbers. Accordingly, the Holmes Report believes that a more accurate measure of industry growth comes from comparing the reported USD revenue from this year's Top 250 vs last year's Top 250 group, resulting in a figure of +5%, the same as last year's growth. It should be noted, however, that a stronger US dollar serves to lower growth this year.

Once again, midsize PR firms — defined for these purposes as those within $50m to $250m — helped to power growth, underscoring this tier of agencies' ability to lead the market in terms of both growth and innovation. Midsize firms were up 9.1% in reported (USD) terms, or 12.8% on a constant currency basis.

“More and more, it’s apparent that the middle of the market is the place to be right now,” said Holmes. “In the past, there were concerns that midsize firms might get squeezed between the global giants—who in theory can do everything everywhere for their clients—and specialist boutiques who did one thing really, really well. But the reality is that midsize firms are big enough to offer all the integrated resources in digital and social and influencer and content creation that clients need today, but small enough to be nimble and flexible and adapt quickly to a fast-changing marketplace.”

All publicly-owned firms, meanwhile, reported fee income of $7bn, growing 11% on a constant currency basis, or +4.2% in reported USD terms, and accounting for around 45% of the overall market.

However, the divide between independent and public PR agencies is seen more clearly seen when analysing the performance of the Big 4 holding groups, whose PR operations grew by just 3.3% to $4.8bn.

The Big 4 (Omnicom, IPG, WPP, Publicis) account for around 30% of the overall global PR market, at $4.8bn. Independent PR firms reported fee income of $5.4bn, again outstripping the PR operations of the Big 4 holding groups, a divide that grows larger every year.

At $1.44bn, Omnicom's PR operations are the second biggest in the world, up 1.8% on an organic basis, and 4% in reported (USD) terms. Interpublic's CMG unit reported $1.3bn, but this includes several firms that do not specialise in PR.

Further analysis of the world's fastest-growing PR firms and other key trends will follow over the coming weeks.