Please refer to our Privacy Policy for important information on the use of cookies. By continuing to use this website, you agree to this.
Home Longreads 2019: Weber Shandwick And P&G Repeat Atop Global Creative Index 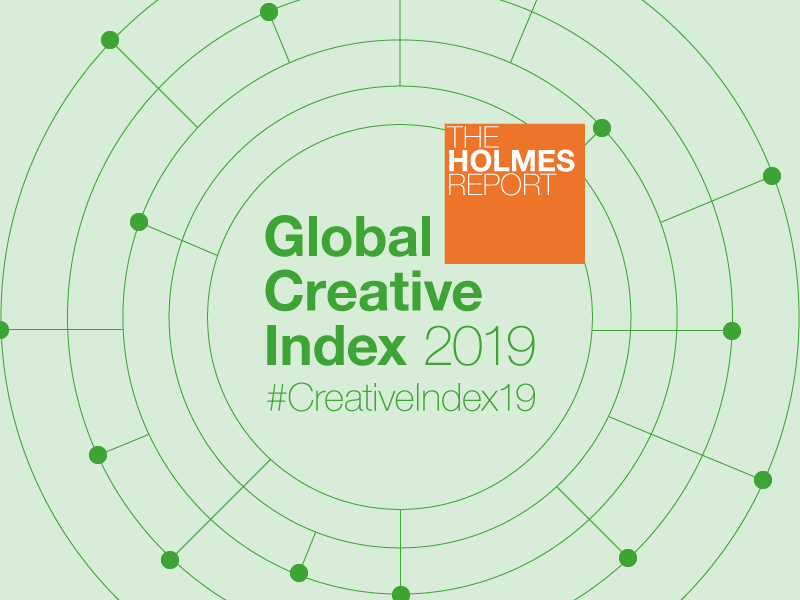 'The cUUpcakes' named top campaign, as Weber Shandwick retains top honours in Holmes Report's annual ranking of creative excellence in PR, which also features the top firms on a weighted and regional basis.

Weber Shandwick has retained top spot in the 2019 edition of the Global Creative Index, marking the third consecutive year (and fourth in five years) that the Interpublic PR firm has ranked first in the Holmes Report's annual benchmark of creativity in the public relations world.

The eighth edition of the Global Creative Index analyses entries and winners from more than 25 PR, digital and marketing awards programmes from around the world over a 12-month period, ending with the 2019 Global SABRE Awards. The formula takes into account the expansion of 'public relations' work across multiple categories at advertising-oriented shows such as the Cannes Lions, with the methodology favouring agencies designated for 'idea-creation'.

As usual, Weber Shandwick's performance was powered by a range of work from across its global network, led by the 'Who Sprinkled Salt on My Cake' campaign for Eisai Korea. In addition, Weber picked up points for campaigns on behalf of numerous clients from around the world, including AB InBev, GM, HSBC, Iceland and South Africa Tourism.

BCW ranked second again, thanks to award-winning campaigns for such clients as Air China, Converse, Huawei, Krazy Glue and Pfizer — with much of the work originating from the network's Asian markets.

BCW narrowly pipped Ketchum, which jumped to third spot after ranking fifth last year. Ketchum's improved performance, which helped it land Global Creative Agency of the Year honours, was led by the '#bloodnormal' campaign for Libresse, along with work for 3M, Discover Puerto Rico, Hershey and Wendy's.

Edelman held onto fourth position, while Ogilvy dropped two spots to fifth. Dentsu jumps two spots to sixth, while MSL re-enters the top 10 after resuming award entries. FleishmanHillard, H+K Strategies and Adfactors round out the top 10. 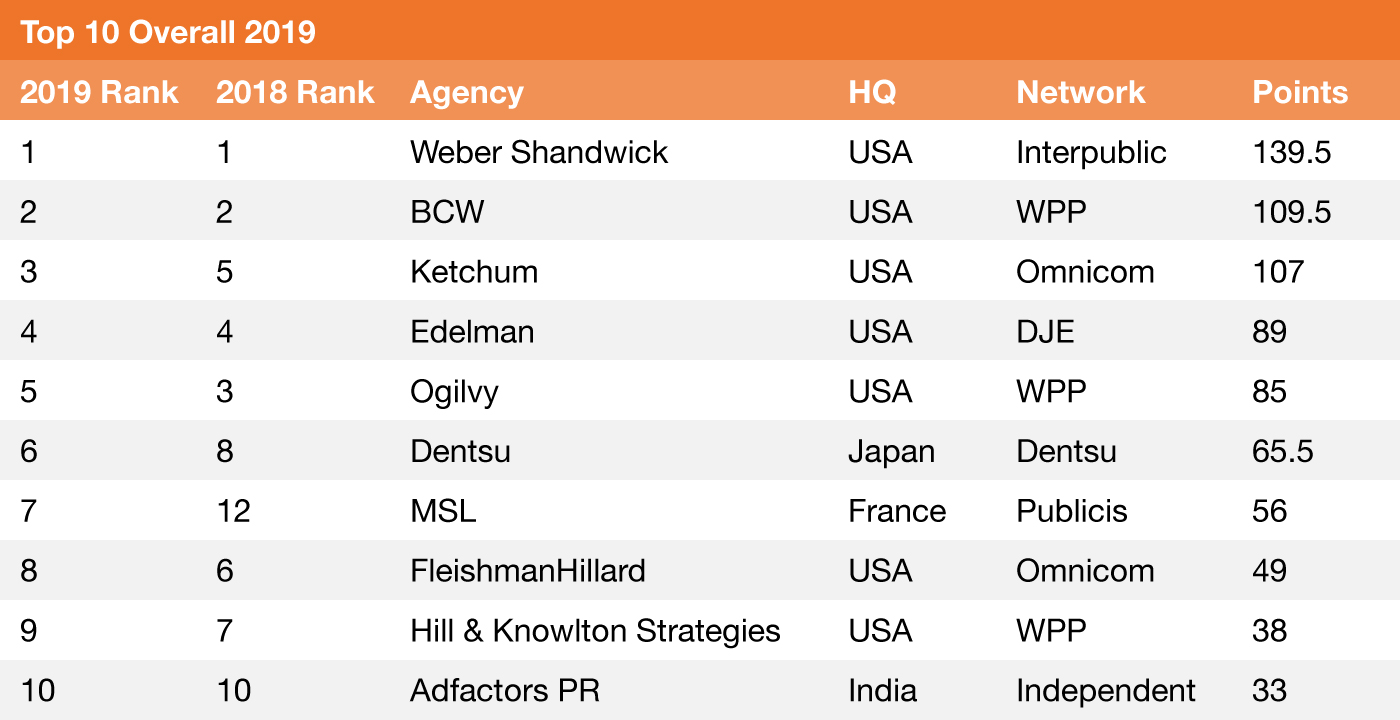 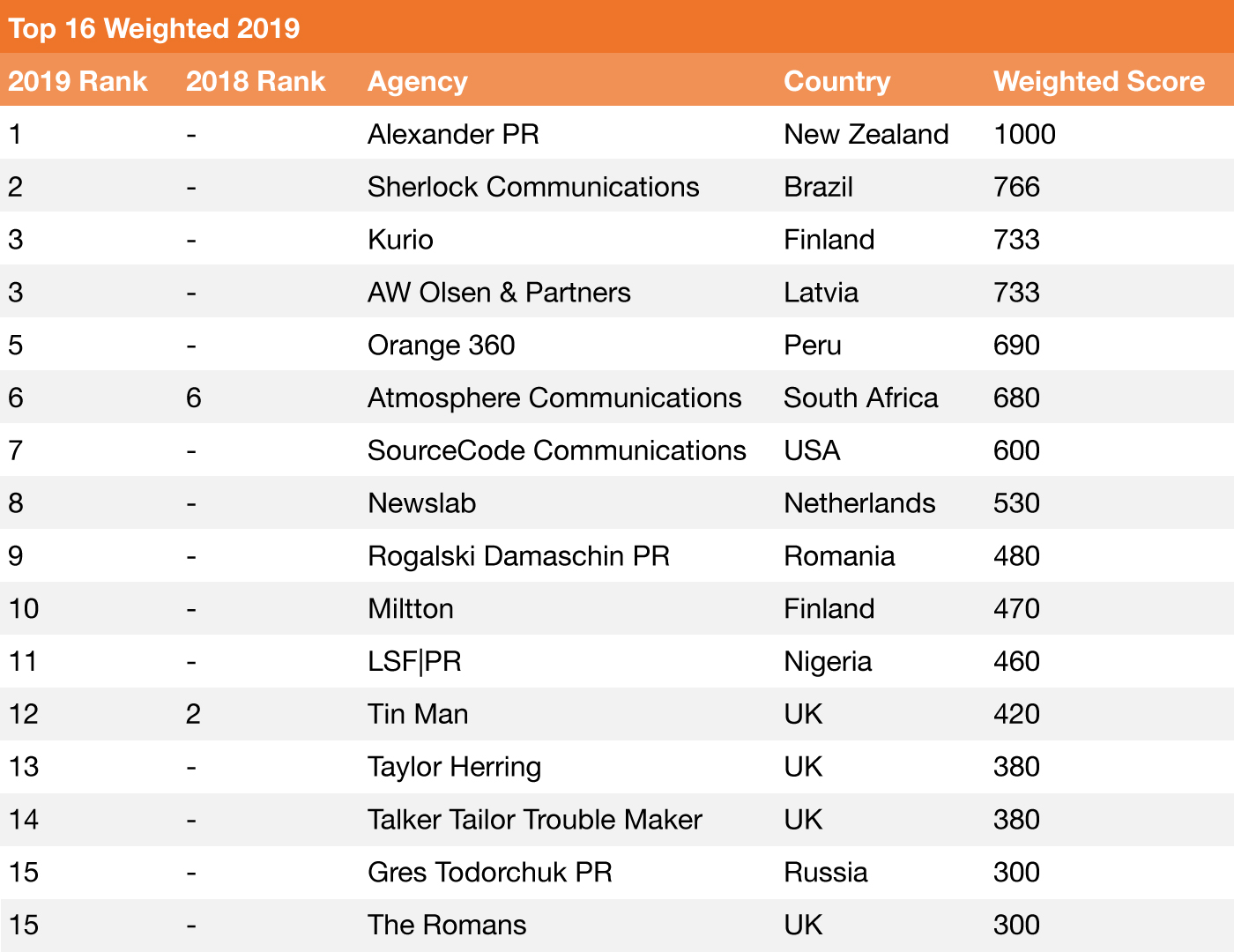 In 2019, this title is taken by New Zealand boutique Alexander PR, thanks to its 'Global Four Day Movement' campaign on behalf of Perpetual Guardian. Alexander headline a top five that was comprised of new entrants, including Brazil's Sherlock Communications in second place and Finland's Kurio in third.

The geographic diversity of the weighted table is reinforced by the presence of Latvia (AW Olsen) and Peru (Orange 360) in the top five, while South Africa's Atmosphere retains sixth place. There are also agencies from Netherlands (Newslab), Nigeria (LSF|PR) and Romania (Rogalski Damaschin) in the top 10, while four firms from the UK make the top 15, including perennial contender Tin Man.

'The cUUpcakes', Roche's breast cancer awareness campaign from Hong Kong, emerged as the most-awarded PR program of the past 12 months according to the Holmes Report's 2019 Global Creative Index. The campaign was awarded Best in Show at the Asia-Pacific SABRE Awards and ranked fourth among Global SABRE winners.

The Index analysed entries and winners from more than 25 PR award programmes from around the world, over a 12-month period, using the 2019 Global SABRE Awards as a cut-off point. Scores were weighted according to a Holmes Report formula that placed particular emphasis on Best in Show winners, while also taking into account the expansion of 'public relations' work across multiple categories at advertising-oriented shows such as the Cannes Lions. 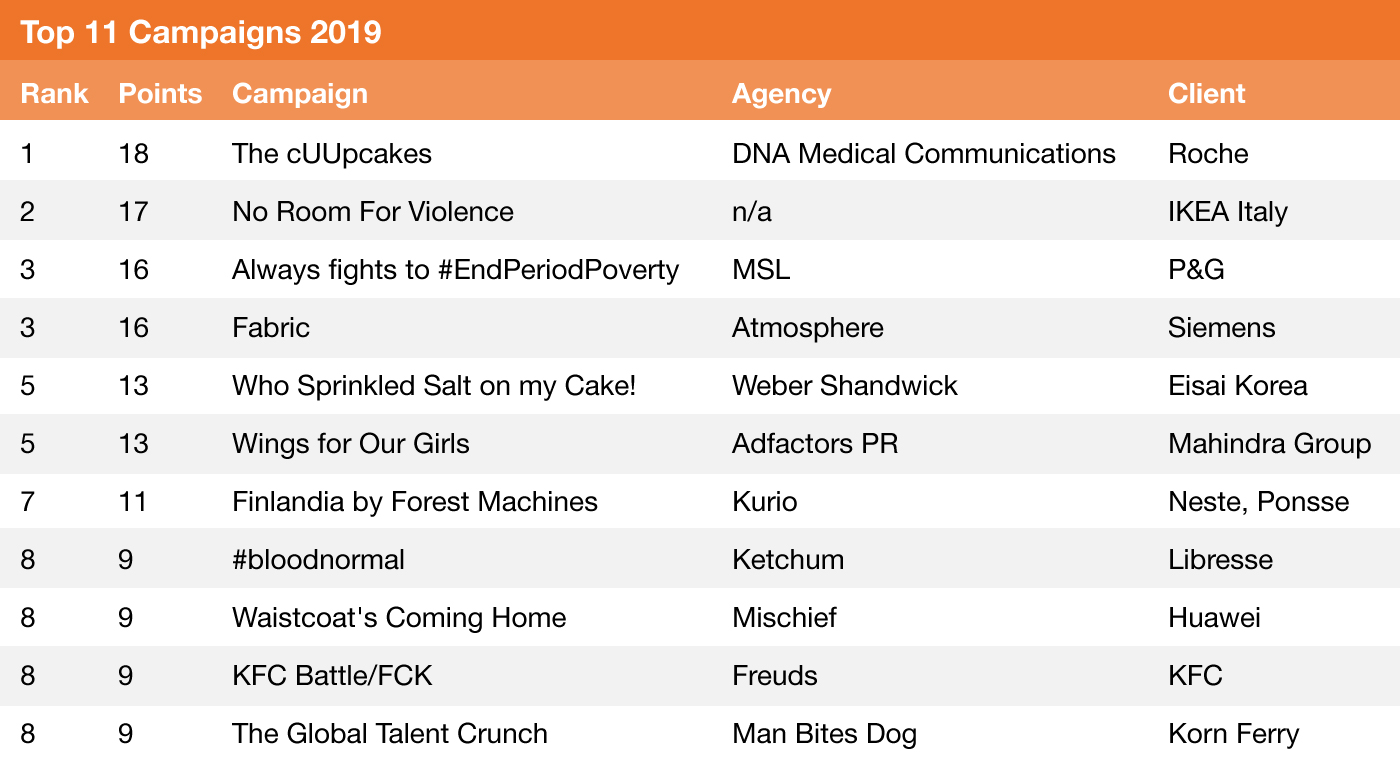 In second spot was IKEA's 'No Room for Violence' campaign, which shone a spotlight on domestic violence in Italy. Third place was shared by MSL's #EndPeriodPoverty campaign for P&G brand Always, and Siemens' 'Fabric' by Atmosphere Communications in South Africa.

The results, which rank the top 11 PR campaigns as determined by award shows, reflect how brand 'purpose' has become a key ingredient in award-winning work, with many of the campaigns drawing on broader social issues, including a particular focus on themes of gender equality and environmental sustainability.

P&G retains top spot for the third consecutive year in the Global Creative Index's ranking of companies according to the performance of their campaigns in the various award shows that are tracked around the world. The FMCG giant prevails, by some distance, over AB InBev at the top of the table, with McDonald's jumping from tenth to third, ahead of Huawei and Roche. 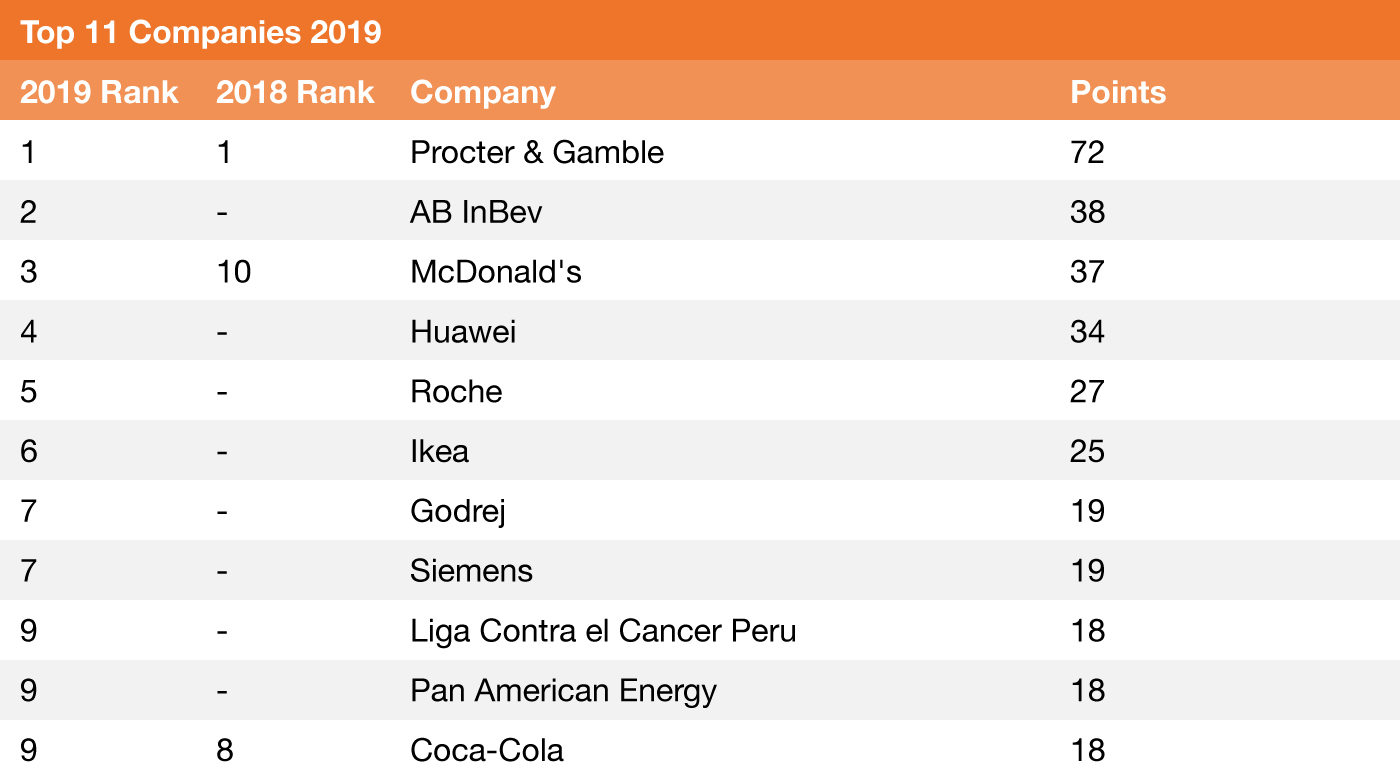 P&G's haul was led by award-winning efforts for such brands as Always, Clearblue, Olay, Pampers and Vicks.

The Global Creative Index also ranks holding groups based on their agencies' creative performance. WPP retains top spot for the second consecutive year, thanks to the efforts of BCW, Ogilvy and H+K Strategies. Interpublic ranks second, led by Weber Shandwick, Golin, DNA Medical Communications and DeVries Global, while Omnicom, DJE and Publicis round out the top five.

The Global Creative Index analyses entries and winners from more than 25 PR award programmes from around the world, over a 12 month period, using the 2019 Global SABRE Awards as a cut-off point. Scores were weighted according to a Holmes Report formula that placed particular emphasis on Best in Show winners.