Please refer to our Privacy Policy for important information on the use of cookies. By continuing to use this website, you agree to this.
Home Longreads 2022: Weber Shandwick, Unilever & Mastercard Take Top Spots On Global Creative Index 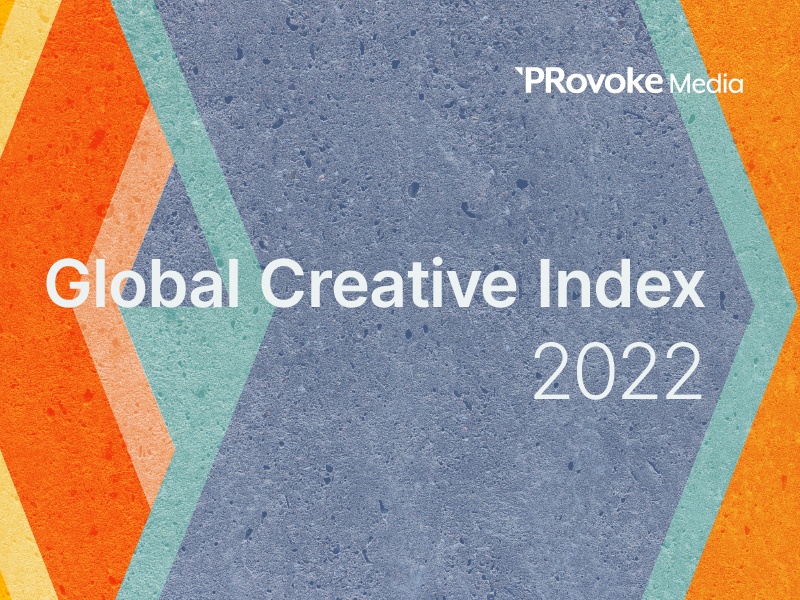 Weber Shandwick has retained top spot in the 2022 edition of the Global Creative Index, marking the second consecutive year, and fifth time in six years, that the IPG firm has ranked first in PRovoke Media's annual benchmark of creativity in the public relations world.

The 11th edition of the Global Creative Index analyses entries and winners from more than 25 PR, digital and marketing awards programmes from around the world over a 12-month period, up to and including the 2022 Global SABRE Awards. The formula takes into account the expansion of 'public relations' work across multiple categories at advertising-oriented shows such as the Cannes Lions.

Weber Shandwick's performance was led by the 'Unmute' domestic violence initiative for Unilever, which also took top spot on the 2022 Campaigns table. Weber Shandwick also benefited from a range of work across the firm's global network, including winning campaigns for Vibha Bakshi, Kevin S Bright, Mastercard, Kellogg and Vedanta.

Weber Shandwick remains in top spot, ahead of Ogilvy, after the WPP firm jumped from seventh in 2021 to take second place this year. Ogilvy's performance was underpinned by the 'Rememory' campaign for the Taiwan Alzheimer's Disease Association, along with Asia-Pacific work for KFC, Google, Merck Sharp & Dohme and Mead Johnson. Edelman remains in third, thanks to winning efforts for Dove, HP, Mars Petcare, Samsung and more.

BCW drops to fourth from second, narrowly ahead of Ketchum, which drops one place to fifth. In sixth place, Japan's Dentsu jumps from 13th in 2021, while JeffreyGroup and Trigger Oslo also move upwards into this year's top 10. 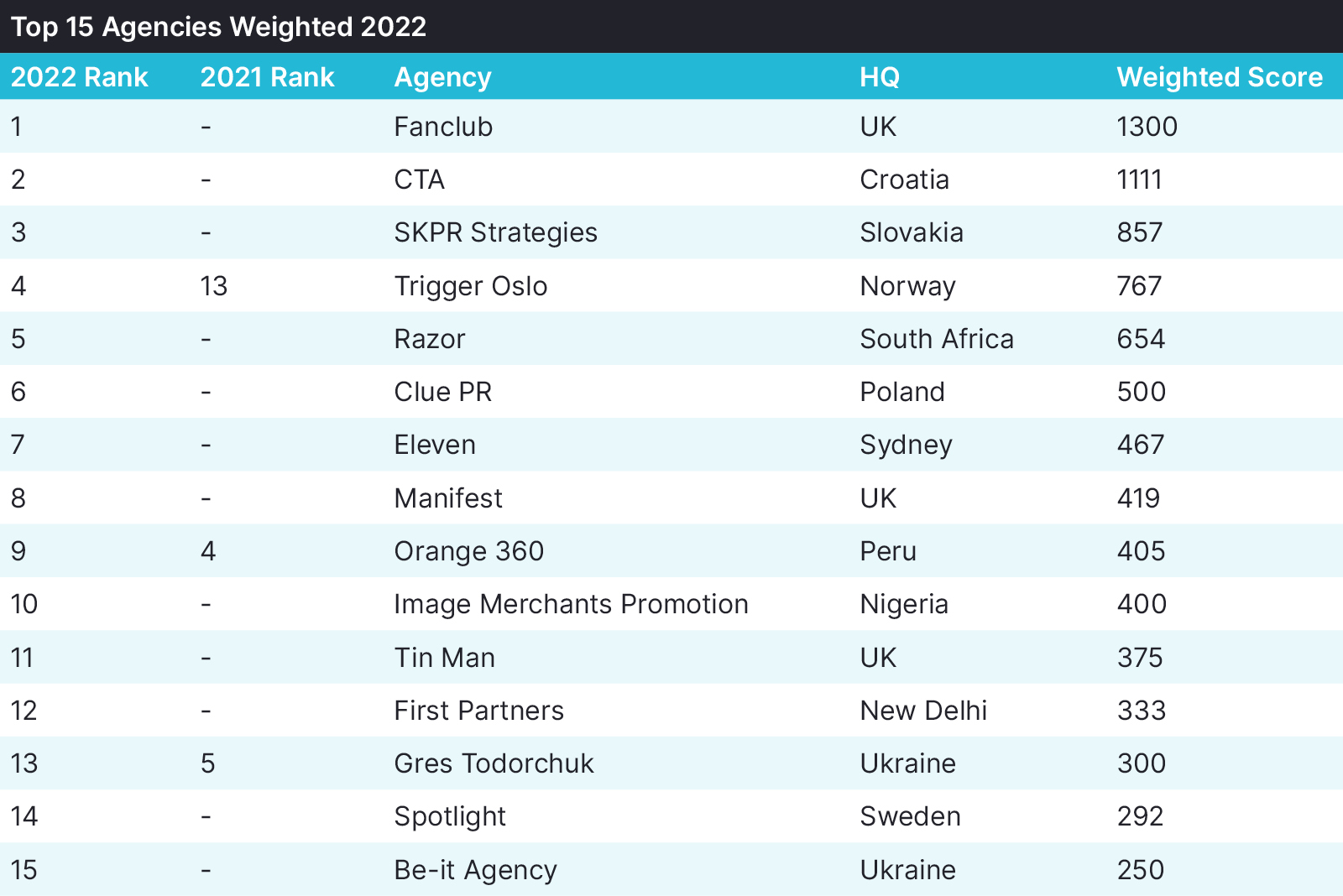 In 2022, this title is taken by UK boutique Fanclub, thanks in large part to its 'Mount Recyclemore' campaign for musicMagpie, which ranked as the eighth most awarded PR campaign of the year. Fanclub comes in ahead of two Eastern European firms — Croatia's CTA and Slovakia's SKPR Strategies in second and third, respectively.

In fourth place, Norway's Trigger Oslo moves up from 13th in 2021, ahead of Razor from South Africa and Poland's Clue PR.

The geographic diversity of the weighted table again stands out. In addition to the UK, Croatia, Slovakia, Norway, South Africa and Poland in the top six, there are also firms from Australia (Eleven), UK (Manifest and Tin Man), Peru (Orange 360), Nigeria (Image Merchants), India (First Partners), war-torn Ukraine (Gres Todorchuk and Be-It Agency) and Sweden (Spotlight). For the first time in the Index's 11-year history, a US firm does not make the weighted table.

'Unmute', which tackled the rise of domestic violence during Covid lockdowns, emerged as the most-awarded PR program of the past 12 months according to PRovoke Media's 2022 Global Creative Index. The campaign from Unilever and Weber Shandwick also ranked 10th among Global SABRE winners.

The Index analysed entries and winners from more than 25 PR award programmes from around the world, over a 12-month period, using the 2022 Global SABRE Awards as a cut-off point. Scores were weighted according to a PRovoke Media formula that placed particular emphasis on Best in Show winners, while also taking into account the expansion of 'public relations' work across multiple categories at advertising-oriented shows such as the Cannes Lions. 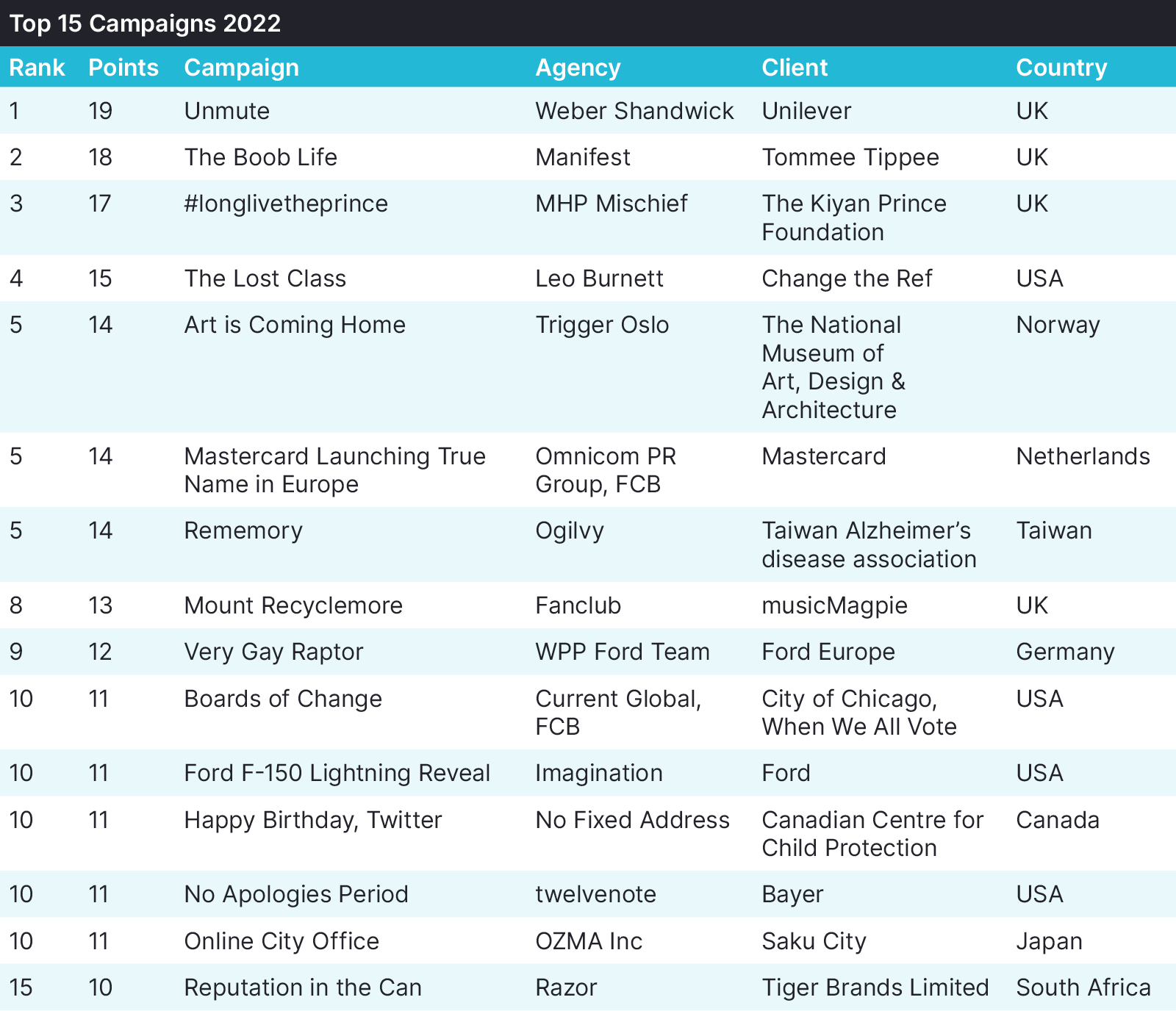 Unmute ranked narrowly ahead of Tommy Tippee's 'Boob Life' effort with Manifest, which aimed to demystify the realities of feeding for new and prospective mums, while #longlivetheprince came in third, honouring slain schoolchild Kiyan Prince 15 years after his death.

The results, which rank the top 15 PR campaigns as determined by award shows, reflect how brand communication adapted to the unique challenges of the pandemic, focusing on social issues such as gender, LGBTQ, environmental sustainability, loneliness and child protection.

Unilever and Mastercard sharetop spot in the Global Creative Index's ranking of companies, according to the performance of their campaigns in the various award shows that are tracked around the world. Unilever jumps from second in 2021, ahead of Mastercard in third. Last year's number one, AB InBev, drops to eighth, while perennial leader P&G slips to sixth. 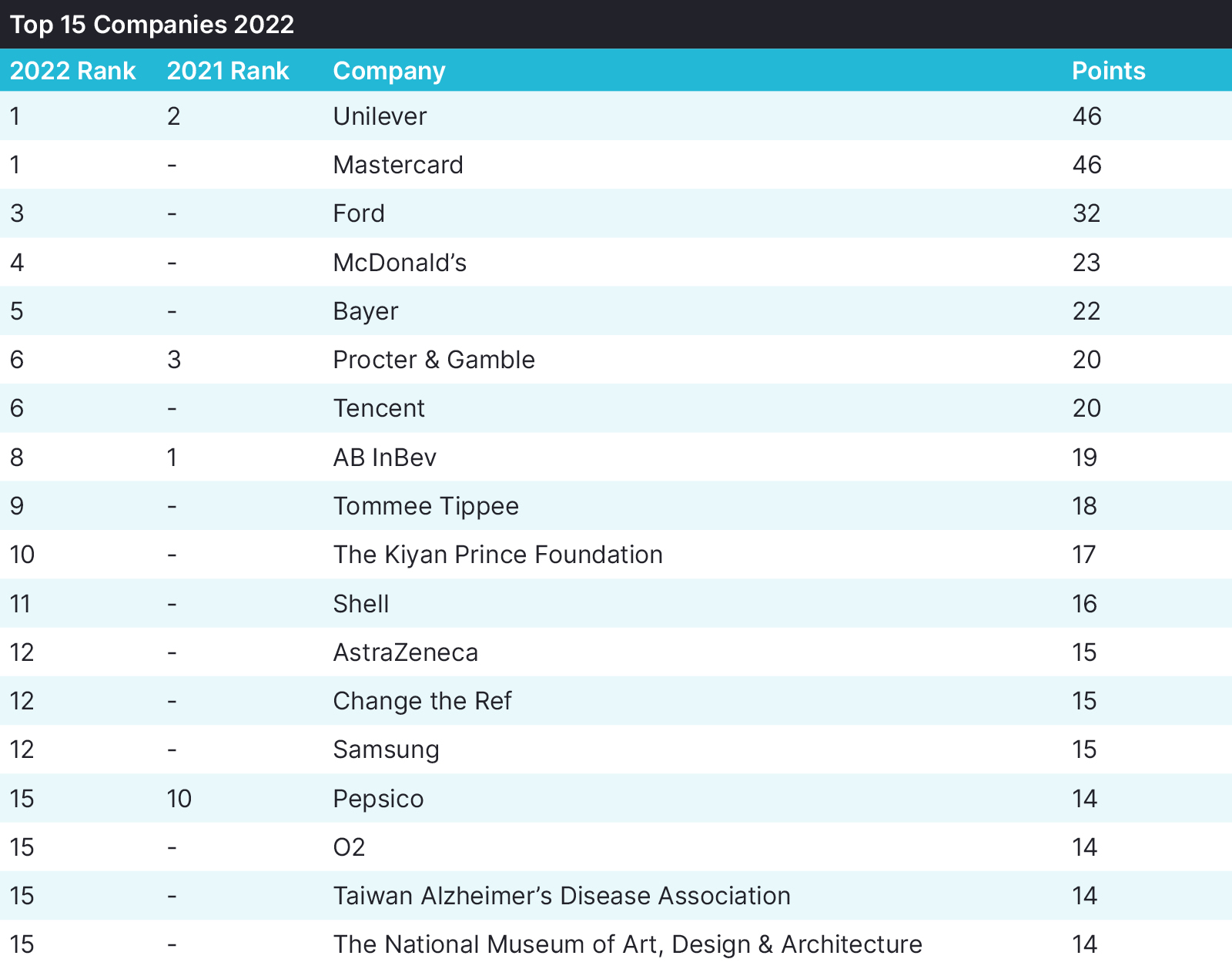 Unilever's haul was led by award-winning efforts such as 'Unmute', along with several campaigns for Dove from across the globe. Mastercard, meanwhile, benefited from its 'True Name' initiative in Europe, along with programs in Africa and the USA.

The Global Creative Index also ranks holding groups based on their agencies' creative performance. WPP retains top spot for the fifth consecutive year, thanks to the efforts of BCW, Ogilvy and H+K Strategies. Interpublic stays second, with the only change in the top five coming from Publicis Groupe and DJE Holdings swapping places to fourth and fifth, respectively.

The Global Creative Index analyses entries and winners from more than 25 PR award programmes from around the world, over a 12 month period, using the 2022 Global SABRE Awards as a cut-off point. Scores were weighted according to a PRovoke Media formula that placed particular emphasis on Best in Show winners.