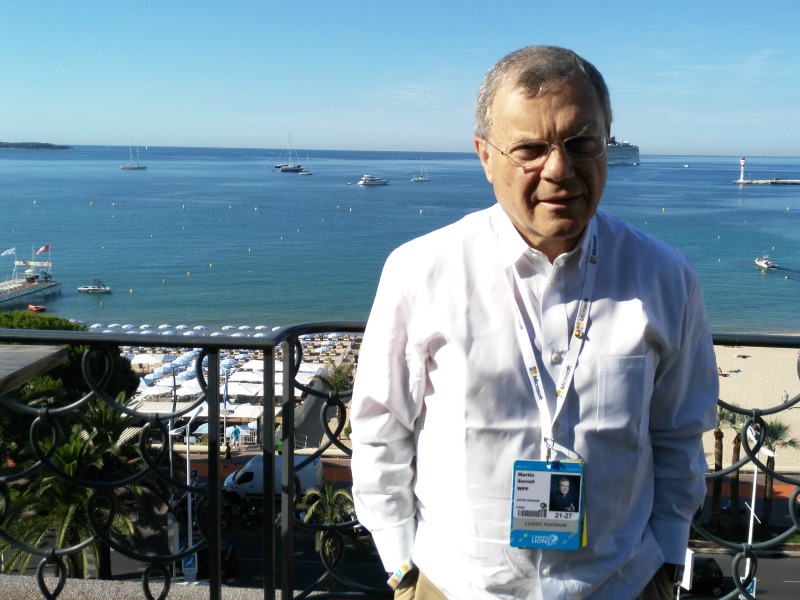 WPP CEO Sir Martin Sorrell sits down with the Holmes Report in Cannes.

WPP CEO Sir Martin Sorrell, sat down with the Holmes Report in Cannes for an expansive interview on the evolution of the PR industry, and how it has become more relevant by embracing data, content and creativity.

Sorrell believes that PR firms need to relax about "being treated as second-class citizens", because "what they do is extremely important and becoming more relevant." He also described Twitter as the "single most important force that has helped the PR industry". In addition, he discusses gender inequality in the PR industry and addresses the cannibilisation among his agencies in a world where lines are blurring.

When we talked a year ago, you mentioned that you missed Howard Paster, quite understandably. You also said you probably need someone in that role. Is that still the case?

I still have that view. The fourth element of what we do is what we call horizontality. Actually, the PR and public affairs firms are working well with different models. Ogilvy PR is heavily integrated with Ogilvy. You have H+K which probably has more of a link with J. Walter Thompson, but also works well with other firms. Cohn & Wolfe has historic links with Y&R, and so does Burson. Burson also works very well across the group, as does Cohn & Wolfe. And then you have specialist agencies, which tend to be a bit more isolated, and I think they can benefit more by working together with the group. But, by and large, it works well and its worked very well here at Cannes.

The other two things that are binding it together — one is data and the other is content. So you saw that with the Snapchat initiative, with the Daily Mail and Alex Jutkowitz, who’s made a big difference to H+K. So there’s two things that have improved that horizontality and, coming back to your original question, that have made that role easier. In Howard’s day those things were there, but they probably weren’t as important as they are now. Public relations, in an attempt to become much more relevant, has not only embraced data and content, but also you see them trying to develop advertising or traditional creative capabilities. That’s all fair, but it does lead to cannibilisation.

Which doesn’t bother you

About eating your children.

Yes. What that means is you have to continously reinvent yourself. There’s an article with Brian Wiener, an analyst, saying that agencies are commoditising. Well, he doesn’t listen, bless him, to what we’ve been saying. We’ve been saying that what we’ve been doing — apart from the strategy based on new markets, new media, data and the application of technology horizontality — there are three other things, other than talent. One is technology, one is data and one, last but not least, is content. In a world where topline growth is difficult to come by — because the worldwide GDP is under pressure — and where pricing power is difficult because we have little or no inflation, in fact deflation, there’s a great focus on cost.

Your PR firms seem to have picked up over the past year.

They’ve done a little bit better. And I think they’ve done a little bit better for the reasons we’ve just discussed. One is, they’ve understood data is more important. Two, they understand  content — that’s probably even more important than data. PR has benefited from the rise of those two things, which has made them more relevant. And I think the nature of PR and public affairs has broadened. But I would say, overall, clients are cautious, growth is hard to come by. The fast-growth markets gave them the growth a few years ago. They still give them the growth but there are question marks over those markets. "You could argue that Twitter has been the single most important force that has helped the PR industry" You mentioned that marketing is not a cost, it’s an investment. That applies to PR as well.

Yes, absolutely. It’s important. It probably, in a procurement-led environment, gets less attention. Because, being smaller in absolute spend, and less integrated globally, it doesn’t get looked at as one thing. It tends to be more fragmented. It doesn’t maybe get the attention of the media spend — that’s often the biggest P&L that has client has. The PR industry has responded well to the content and data opportunities. In an online world, I think people see it as being more relevant. And people are using it effectively. You see it here in Cannes, people are posting, blogging, tweeting, and you see the relevance.

To my mind, Facebook has always been a branding medium at its heart. Google is more effectiveness-oriented. Twitter has always been, to me, a PR medium. Actually Twitter itself, you could argue that has been the single most important force that has helped the PR industry. It’s very powerful.

One of the things we’re seeing with PR agencies is that, if they want to be editorially relevant on these platforms, they need a paid component as well. How do you see that developing at WPP?

I think they will. In an integrated group like our own, that will bring competitive issues to the fore. Coming back to the cannibalisation argument — I don’t think you can run a business like ours which is pure, where there is no overlap and no clashing. I look at every hire over $150k. People say I do that because I’m a micro-manager and want to interfere. That’s not the case. It gives me a good view of what’s going on across the business. Every year we invest $12bn in people, we invest in human capital. If you want to understand what’s going on inside WPP, if you were on a desert island, one of the ways you could do it is looking at the hires and looking at the fires, and where the vacancies were. It tells you where the ebb and flow is inside the company. So I think it’s really important.

Do you see any changes in the type of people on the PR side, at that level?

Yes. The same thing we said with the Mad Men / Maths Men thing. We’re hiring very different people. The great thing is that a lot of those skills are skills that younger people have. Therefore, some of our businesses which, years ago, may have not have been as attractive — young people graduating might have said I'm going off to investment banking or consulting.  The WPP fellowship programme is more difficult to get into than Harvard Business School. Similarly, we have our communications school in China and we’re going to announce a similar initiative shortly in India, linked to a strong university there. You get the traction in those countries, which is a bit sad, because you would have thought you’d get the traction more in the US or UK, or France or Germany.

One of the big themes this week has been gender equality. In the PR industry, specifically, it’s 70% women overall. At the top it’s 30%.

Yes, this is a really important point. WPP is 54% women overall. At middle management levels it's 50/50. At senior levels it’s 34%. It’s for the obvious reasons — not acceptable reasons — but obvious reasons. That has to change. If you think about someone like Shelly Lazarus, she’s obviously extremely talented, but she came up through Ogilvy Direct. The reason was that men tended to think that those areas were below the salt, not disreputable, but things that were not fashionable. As a result, women it found it easier to get into those things. This is not acceptable, but a simple fact of life.

Public relations, also, I think is like that. But as the industry becomes more relevant and more important — if it is 70%, that gives them more opportunity. If you integrate public relations and if content and data become more and more important, and the creative part of it as well, that means that's a very good entry point and development point to go further. So I think that appears to be a weakness but it can, paradoxically, be a strength.

You talked about relevance from a PR context. The PR industry can seem overly focused on proving its relevance.

And, frankly, if clients are really focused on cost, if you can deliver all the same value or even less value but at a lower cost, you become even more relevant. It’s very difficult to track PR spend. If you ask a client how much they spend on marketing, often they don’t know the full details. There’s a definition problem and then there’s a natural resistance, often, to giving that information, and it gets buried in other budget lines. So, it’s quite difficult to forecast it. Generally, we reflect what’s going on in the industry — public relations and public affairs is more important today than it was last year. Probably in a Cannes context, it becomes more important too.