Please refer to our Privacy Policy for important information on the use of cookies. By continuing to use this website, you agree to this.
Home Longreads Publicis Omnicom: Sorrell's PR Masterclass Outshines Merger Missteps 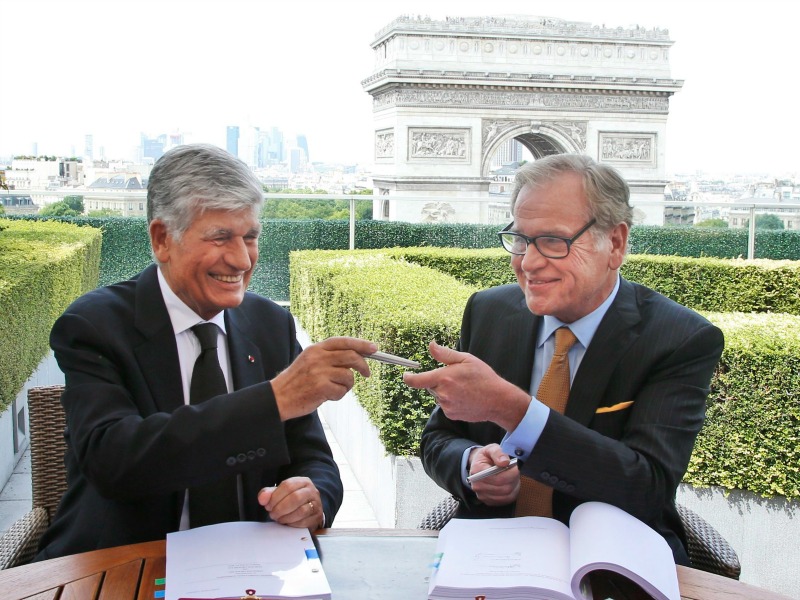 The irony is that two companies that profess an expertise in reputation management could end up with their credibilities so severely undermined.

From the outset, something never really felt quite right about the Publicis Omnicom merger, even if the pictures selling the deal attempted to tell a different story. As mutually besotted as Maurice Levy and John Wren attempted to appear during the full bloom of their Parisian summer fling, it remained difficult to imagine a less likely couple. As the sunshine gave way to the colder reality of making the new relationship work, that went for their companies too, divided by the yawning chasm of US-French relations.

Still, successful mergers have been created from less and, if nothing else, the deal signing in Paris demonstrated a certain amount of communications foresight. The idea of an American invader gobbling up a national champion was never likely to play well among the French. Billing it as a ‘merger of equals’, signing the deal in Paris and ensuring plenty of structural oversight for Publicis leadership ensured those concerns, at the very least, were initially quelled.

If those images now look like the high point of the doomed union, they also seem to be one of the few moments in this saga when action outweighed rhetoric. A time when the two CEOs had faith in each other’s intentions, before management tensions conspired to scupper the $35bn ‘merger of equals’.

The irony, perhaps, is that two companies that profess an expertise in reputation management could end up with their credibilities so severely undermined. "They referred to cultural clashes,” says one financial PR specialist who knows Publicis Groupe well. “These are two companies who are supposed to be world leading in terms of managing reputation. Did this not occur to them? It’s ludicrous.”

The public relations concerns do not stop there. At times the deal seemed fuelled (and ultimately felled) by hubris, the need to secure the number one spot and, with it, Wren and Levy’s “legacy”. Clients could be forgiven for wondering who exactly was paying the bills, particularly as costs mounted up.

"I would say that the benefits to clients and employees were poorly articulated if at all,” says an Omnicom PR agency executive. “From the beginning it was selfishness. That’s no reason to do the merger.”

Paradoxically, the flimsy rationale for the merger may yet prove a blessing, according to others from within the two groups. “The biggest struggle has been clarifying the benefits with clients and employees,” one insider said. “So the reputation risk is fairly low in that sense.”

Not that the companies’ leadership ever considered consulting their formidable PR firepower — a combined $1.8bn worth of resources — about the communications missteps that would come to plague the deal. While Publicis Groupe agency Kekst played an initial reactive role on communications, one PR executive recalls seeing poorly-prepared management Q&A briefing notes that had clearly been put together without any external guidance.

More worryingly, perhaps, given the 130,000 employees this would affect, that mentality pervaded the most delicate task of all — persuading those people that the deal would not affect their jobs. “At every step, it was a lesson in how not to do things,” says the PR source. “There were no internal communications. You can say things have to be kept under wraps, but even taking that into consideration, there was nothing.”

Meanwhile, as with many mergers, our protagonists found themselves on the backfoot because of a particularly vociferous opponent. “They weren’t ready for the Martin Sorrell backlash,” says the source, referring to the WPP CEO’s one-man lobbying campaign that took in all points across the globe, including the Holmes Report’s Global PR Summit last year in Miami, where he called the deal “strategically puzzling and structurally clunky.”

Sorrell’s sharp-tongued persistence now looks like something of a PR masterclass, a signal reminder to Publicis Omnicom management of how their own communications strategy was coming apart amid a  predictable cultural clash between the US and French business leaders.

The squabbling over roles and responsibilities served to underscore the lack of a shared purpose. Crucially, the ‘merger of equals’ positioning standing never sank in, setting the stage for the the erosion of trust that culminated in numerous leaks suggesting the deal was falling apart.

One financial comms specialist admits that many of today’s mega-mergers are more commonly rooted in balance sheet and P&L considerations, rather than strategic logic and a concern for culture. Regardless, he insists that some issues — such as the merger’s elaborate tax scheme — could have easily been avoided. “It was too complex. Investors want transparency and simplicity.”

What investors now have, presumably, are plenty of questions as to how a miscalculation on this scale was allowed to happen. Questions that may yet claim John Wren and will certainly impact Levy’s precious legacy.

“If you’re an investor, you’ll be thinking — what a colossal waste of time,” says the financial PR pro. “You’ve lost momentum and money — it damages the credibility of both management teams."

Already, the French media have started asking uncomfortable questions about the whether the deal made sense for France, the one outcome that Levy — presumably — was trying to avoid.

As for Wren, AdAge notes that he may have some damage limitation work to do, after spending all year claiming that “what we have is not enough”. Even if that is the case, one assumes that he will not be consulting his crisis management specialists for counsel.

“These guys are risk managers,” says the Omnicom PR exec. “They are not steeped in these sorts of considerations — they are dealmakers.”

Those agencies, meanwhile, are left trotting out the same “business as usual” line that they have been deploying for the past nine months. In truth, it is hard to discern any disruption among the two groups’ PR firms. “The amount of PR business was substantial but it was clear that it was still just a blip on this thing,” says another Omnicom exec.

If nothing else, MSLGroup will probably be happy to retain its sole PR brand status at Publicis Groupe, rather than be surrounded by numerous other global networks, as we analysed last year.

“For MSL, it’s a big positive, because I think Maurice has always treated it as a favoured child,” said a rival PR agency boss. “Maurice will give [MSLGroup CEO] Olivier Fleurot more money for acquisitions.”

Not that competitors do not spy an opportunity in the fallout. “These guys have spent a ton of money — they are going to be squeezed like crazy for margin," says the rival agency boss. "We look at this as a recruitment opportunity. The screws are going to be tighter."