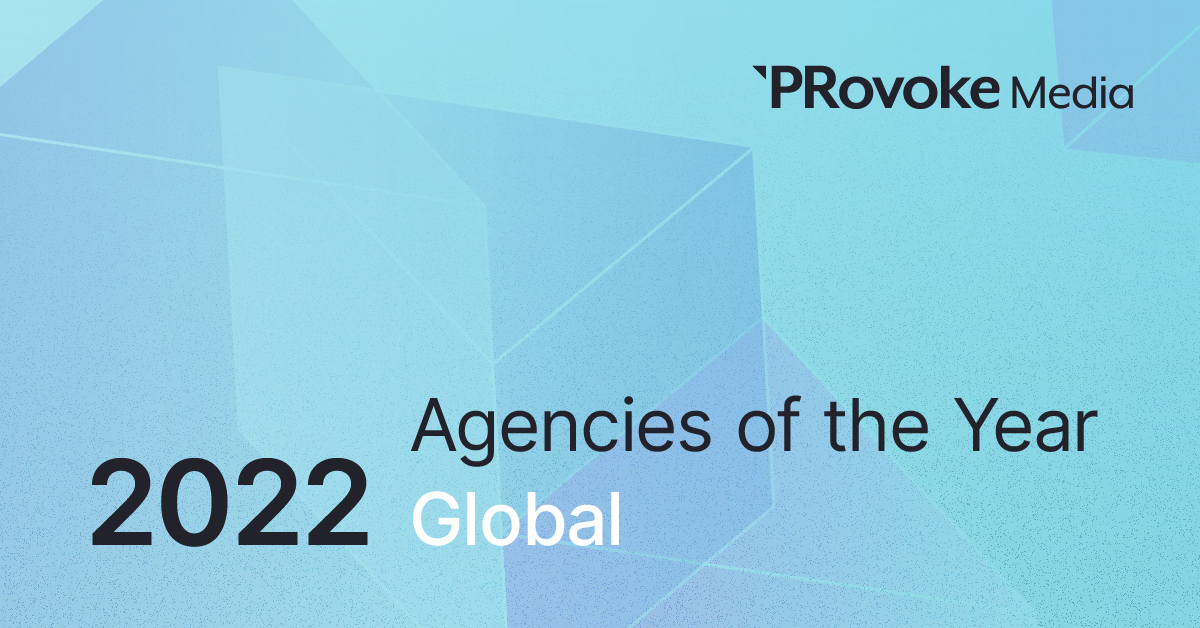 2022 Global New Agencies of the Year

The 2022 Global PR Agencies of the Year are the result of an exhaustive research process involving more than 500 submissions and (virtual) meetings with the best PR firms across North America, EMEA, Asia-Pacific and LatAm.*


Analysis of all of the Winners and Finalists across specialist categories can be accessed via the navigation menu to the right or below. Winners are announced at the 2022 Global SABRE Awards, taking place in-person at the 2022 PRovokeGlobal Summit on 26 October.

Bryson Gillette was started by Bill Burton, who served as deputy White House press secretary and special assistant to President Barack Obama. The company was created as an intentionally diverse workplace that would focus on the issues and campaigns that are making the world a better place. After just a short period of time, it has done just that. Working on education reform, social media reform, and projects small and large across economic sectors, Bryson Gillette’s work has been felt on a global scale.

Bryson Gillette was founded in January 2020 with two employees and one client as a remote-first organization, allowing the firm to expand its reach, working with clients across numerous cities. Now, with 26 employees across seven states and territories, the agency has the capacity and the ability to bring a diverse perspective to all its work. This includes native Spanish speakers in Puerto Rico and California, allowing for multilingual campaigns. The agency has worked with more than 100 political and public affairs clients including Facebook whistleblower Francis Haugen, The Center for Humane Technology, 1IN4 Coalition, Charles Booker for US Senate and Southern Poverty Law Center.

Burton intentionally built a location-agnostic firm with a focus on finding the most talented and diverse strategists in the country, without being limited to specific cities or regions. Moreover, the firm is intentional about building team culture remotely including a focus on mentoring younger talent through personal attention and growth opportunities as well as one-on-one meetings with senior leaders. Bryson Gillette has also established an internship program that actively recruits students from Historically Black Colleges and Universities, building the pipeline of tomorrow’s public affairs and political professionals. The agency’s team is over 50% women and over 50% people of color. In addition to Burton, company leaders include senior VP Sarah Angel, strategic comms head Shira Fine and VPs Rebecca Pearcey and Emily Schwartz.

Bryson Gillette has quickly become a leader in media strategy and developing thought leaders. The firm created and led a global media consortium for Frances Haugen, the Facebook whistleblower, taking a dynamic approach to generate an enormous amount of global media interest. The efforts elevated Haugen to a position that landed her recognition in the president’s State of the Union Address this year. Bryson Gillette also represent Tristan Harris and the Center for Humane Tech and guided them through the release of the Social Dilemma. Together with Netflix, Bryson Gillette coordinated a global communications campaign that delivered the message to millions around the world. The work has helped to drive a cultural reconsideration of technology’s role in our society and the necessity of holding tech companies accountable.

London’s Fight or Flight is a boutique B2B PR agency whose founders — Charlie Meredith-Hardy, David Woodward and Joe Walton — spent a combined 32 years at Weber Shandwick before launching the firm in April 2020. Their goal in doing so: disrupt a B2B market dominated by boring product stories, whitepapers, and webinars at a time when B2B brands fight for attention in the same crowded space as consumer brands. Fight or Flight’s owned, earned and social campaigns are designed to enable B2B brands to compete, while turning heads and making headlines.

Fight or Flight is located in London.

Fight or Flight has made immense strides since opening for business in April 2020, just one month into the first Covid shutdown. Much of the firm’s success is tied to two core areas of expertise — creating B2B campaigns that attract mainstream attention and the delivery of multilanguage PR programs across Europe. The former is exemplified by the firm’s influencer partnerships with astronaut Scott Kelly for Wolters Kluwer and presenter Angelica Bell for Sky, which use consumer-grade tactics for B2B audiences. As for the latter, Fight or Flight’s network of language and culture experts across France, Spain, Italy, Germany, Benelux and the Nordics allows companies to run campaigns across the region without having to hire expensive in-market teams. For Roland DG, the model drove more than 400 pieces of coverage across Europe in 2021, 200 of which were in languages other English. Now a 20-person shop, Fight or Flight grew an eye-catching 232% to £1.8 million in 2021 driven by new business from DLA Piper, Trustly, Lyca Mobile, Sky Connect and Nokia, which joined existing clients Flipdish, GitHub, Expedia and LinkedIn.

Despite early Covid-related setbacks, Fight or Flight invested in a high-quality senior team with big agency pedigree as a means of growing quickly and navigating the challenges of the pandemic. Over the last 18 months the firm has hired Dan Bird and Gemma Ashley as associate directors from Weber Shandwick; Lauren Payne McLeod as AD from Teneo; and Stephanie Crisp as AD from Edelman. Fight or Flight starts and ends its days with a team call to foster unity and togetherness and, to that end, has hosted socials, dressing-up competitions and team events on Zoom and Teams. Senior leaders provide each staff member tailored training to help them meet career goals. As of January 2022, 68% of the agency’s permanent employees are women, 26% of the agency’s permanent employees come from ethnic minority backgrounds and there is pay parity across all roles, levels and salary bands in the agency. As part of its DEI commitment, Fight or Flight last year hired two apprentices through the PRCA’s PR & communications assistant standard program, and was one of the first signatories of the PRCA’s Accessible by Design initiative.

Since launch, the agency has created the world’s first ‘Dress Release’ for printing firm Roland DG, helped LinkedIn to make sense of the new world of work, launched Sky Connect’s challenger broadband service for SMBs, repositioned Lyca Mobile as the leading British MVNO, and brought humble digital health start-up eConsult out of the shadows and into The Independent, Forbes and Sifted. Fight or Flight also helped Flipdish — Europe’s latest unicorn — wage war on Uber Eats, Deliveroo, and Just Eat’s massive commission fees (persuading a pizza restaurant to break up with Just Eat on Valentine’s Day), got Swedish fintech Trustly onto the front page of the Daily Mirror on Euro 2021 semi-final day and launched Trainline’s B2B offering during rail’s biggest shakeup in decades.

A high-level forum designed for senior practitioners to address the critical issues facing the profession.