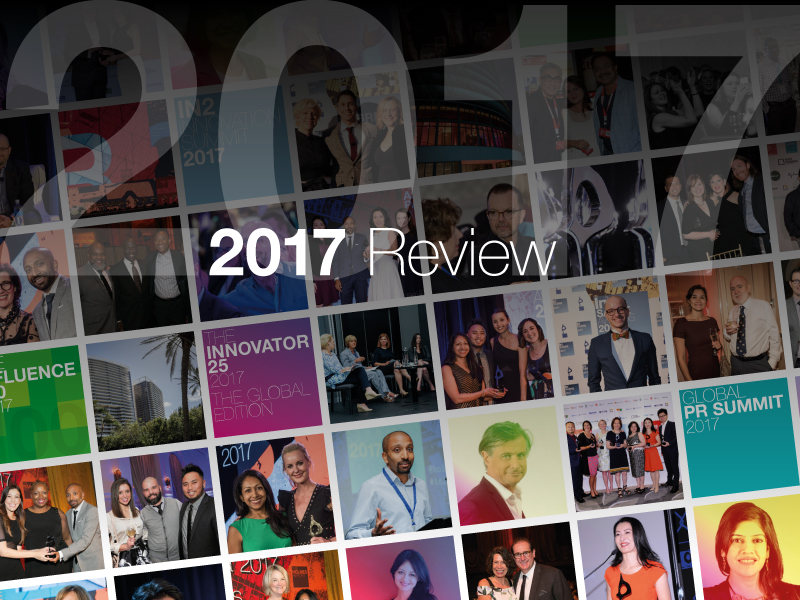 Executive departures and agency restructuring reigned supreme in 2017, along with some big-budget reviews and continuing intrigue at the world's biggest PR firm.

We continue our 2017 Review with our 10 most-read news stories of the year. As ever, we've excluded awards and ranking stories as they skew results. This year's list is particularly dominated by talent moves, and also by the Bell Pottinger. Elsewhere, there were some seismic changes on the in-house side of the equation, while there are no prizes for guessing which agency generates the most box-office appeal.

1. David Brain Quits Edelman After 13 Years
There were several senior departures from Edelman this year, but none bigger than APACMEA CEO David Brain, one of the key architects of the firm's growth into the world's largest PR firm. Brain left after 13 years with Edelman, as the firm continued to undergo a substantive transformation, much of which was set in the motion by the Auckland-based Brit. Other major Edelman stories this year included the departure of a trio of global practice heads, along with turnover and layoffs in the Middle East and Asia-Pacific. Brain's presence at the top of this list, furthermore, also sees him do 'the double', after taking part in our top-ranked podcast of the year too.

2. Omnicom Merges FleishmanHillard, Ketchum & Porter Novelli In Four Euro Markets
People tell us that no one is interested in agency news. People are wrong. Omnicom's decision to merge its three global PR networks in four European markets served as a tangible sign of how the publicly-held agency world is changing fast, particularly under the leadership of Omnicom PR Group CEO Karen van Bergen. And van Bergen, along with her deputy David Gallagher didn't stop there; before the year was out, there would also be a dramatic leadership change at Ketchum.

3. Richard Edelman: Bell Pottinger Expulsion Is 'Proud Moment For PR Industry'
Perhaps the only surprise here is that Bell Pottinger, indisputably the biggest PR story of the past decade or even more, did not rank higher on this list. That may well be because there were so many stories on Bell Pottinger's demise to choose from. This one scored well because it had everything people love from a PR news story — scandal, intrigue, ethics and, of course, Richard Edelman.

4. Ray Day Named IBM Chief Communications Officer As Jon Iwata Retires
The biggest talent story in the in-house world in 2017, and for many a year we would suggest, concerned the retirement of corporate communications giant Jon Iwata after a 34-year career at IBM that helped to define the modern engagement function. Iwata stepped down less than six  months after taking on a newly-created role as chief brand officer at IBM, as the company continued to contend with considerable change across its operations. Former Ford chief communications officer Ray Day arrived to take on a CCO role that was previously held by Andy Whitehouse.

5. Tata Reviews Lucrative PR Remit After Putting Rediff/Edelman On Notice
Not quite the biggest review of the year (that honour goes to Nissan further down the list), but arguably the largest homegrown Asian PR assignment, worth as much as $5m to Edelman India. And you could safely say that India's PR industry had been waiting a long time for this story, given the intrigue that always surrounds the decisions of the Tata business empire. Almost a month since we broke this story, meanwhile, and there is still little word about how Tata will structure its gargantuan PR assignment going forward, much to the chagrin of agency heads that are keenly awaiting more information.

6. Senior Communications Leaders Depart FTI Consulting
FTI Consulting may not quite have the box-office appeal of Edelman, but the news that three of its top leaders were quietly leaving the firm certainly attracted plenty of attention, amid broader change at the agency once known as Financial Dynamics. Gulf head John Hobday, Asia-Pacific lead Paul Marriott and veteran exec Jon Aarons were all key figures in FD's rise and their departures, followed by the resignation of CEO Ed Reilly later in the year, appeared to mark the turning point for one of the era's defining financial PR firms.

7. Nissan Hands Lucrative Global PR Remit To Edelman
If you were constructing the perfect PR story, this might well be it. A big-budget review (worth upwards of $10m), led by a relatively new CCO (Jonathan Adashek) intent on reshaping corporate communications, followed by a fiercely-contested global pitch that saw Nissan execs visit several agency offices in London. And, of course, Edelman won — which never hurts a story's popularity either.

8. Poor PR Performance Puts Publicly-Held Agencies On Back Foot
Not exactly a news story, this analysis of the global slowdown followed another dismal set of quarterly results from the holding groups. With the marketing communications industry in the grip of its worst year since the global financial crisis took hold almost a decade ago, the second half of the year took on a very different hue from H1, underpinning considerable about agency models, transformation and — perhaps most importantly — consolidation.

9. Beth Comstock Announces Retirement From GE
The other major in-house story of the year (narrowly pipping Corey DuBrowa's move to Salesforce) concerned the retirement of another corporate communications giant, this time GE vice-chair Beth Comstock. Much like Iwata, Comstock helped to define the modern public relations function, and stepped down after 27 years with GE. Both of those retirements, furthermore, were discussed in this Echo Chamber podcast episode.

10. HSBC Comms Chief Pierre Goad: 'Communications Will Beat Marketing'
Amid the convergence that has characterised the collision of PR and marketing in recent years, research — from our own Influence 100 and Global Communications Report — suggests that marketing is taking a leadership role of integrated functions. HSBC chief communications officer Pierre Goad, though, is having none of it — and chose November's Asia-Pacific Communications Summit as the platform to explain why he thinks the communications function will emerge triumphant. It was a contrarian view that proved of particular interest to our in-house readers, especially those in the financial services sector.