Please refer to our Privacy Policy for important information on the use of cookies. By continuing to use this website, you agree to this.
Home Latest Jacinda Ardern's Covid-19 Comms Most Impressive, Say PR Leaders 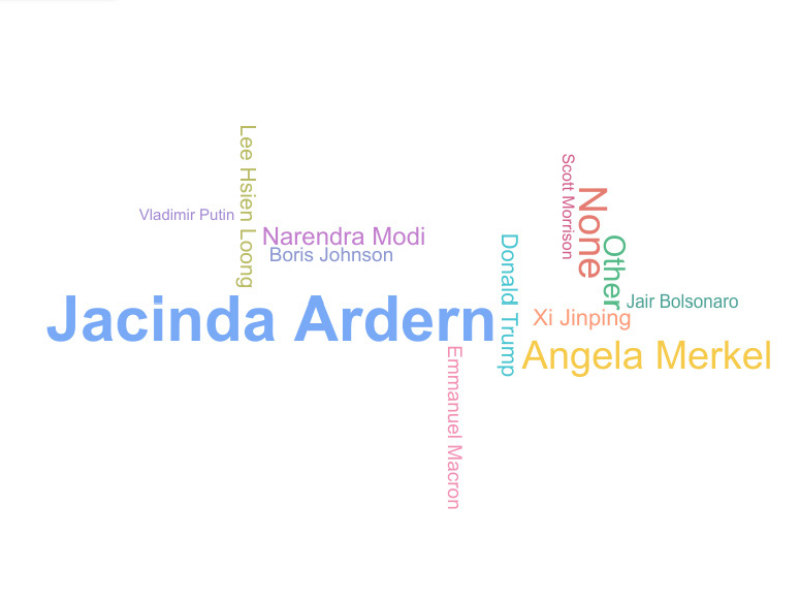 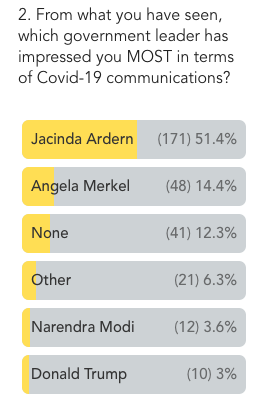 The survey — conducted over the past two weeks by Stickybeak in partnership with PRovoke Media, APACD and ICCO — launched on Monday by revealing how business sentiment in the PR industry had improved, before yesterday unveiling specific concerns around the return to work.

The support for Ardern comes after she was named the world's best communicator for the second year running by the Influence 100, PRovoke Media's survey of the world's top in-house communications and brand marketing leaders. The Influence 100 also ranked Merkel in second place.

In addition, Ardern's performance underscores why New Zealand's Covid-19 response took top spot in the second wave of our Covid-19 survey in May. In similar fashion, Germany took second place at that time too, while the US ranked last.

Ardern and Merkel dominate the latest survey results, accounting for almost two-thirds of votes. The next highest-ranked leader is India's Narendra Modi, thanks in large part to considerable support from respondents based in South Asia.

Remarkably, perhaps, Donald Trump is the top choice of 10 respondents, including six based in North America. That reflects 3% of all respondents, putting Trump ahead of Xi Jinping (2.4%) and, more surprisingly, Singapore PM Lee Hsien Loong (2.1%).

Other leaders that rank poorly are Boris Johnson and Emmanuel Macron (1.5% each), Scott Morrison and Jair Bolsonaro (0.6% each). Vladimir Putin ranks last with just one vote, from a respondent based in Greater China.

At the top of the table, the results do not demonstrate much variance by region. Ardern and Merkel are the top two choices of respondents in the biggest regions of North America, Europe and UK, although there is considerably less support for Merkel in Southeast Asia, Australasia and South Asia.

Of note, not a single UK respondent selected Boris Johnson, while Greater China respondents rank Xi in third spot behind Ardern and Merkel.

A communications graduate from the University of Waikato, Ardern's mastery of communications was also recognised in PRovoke Media's Innovator 25 listing last year, where the New Zealand PM was named as one of 25 individuals in the Asia-Pacific region that are reshaping influence and engagement.
Article tags
Government Trump APACD ICCO Stickybeak Research Politics Coronavirus Covid-19 News