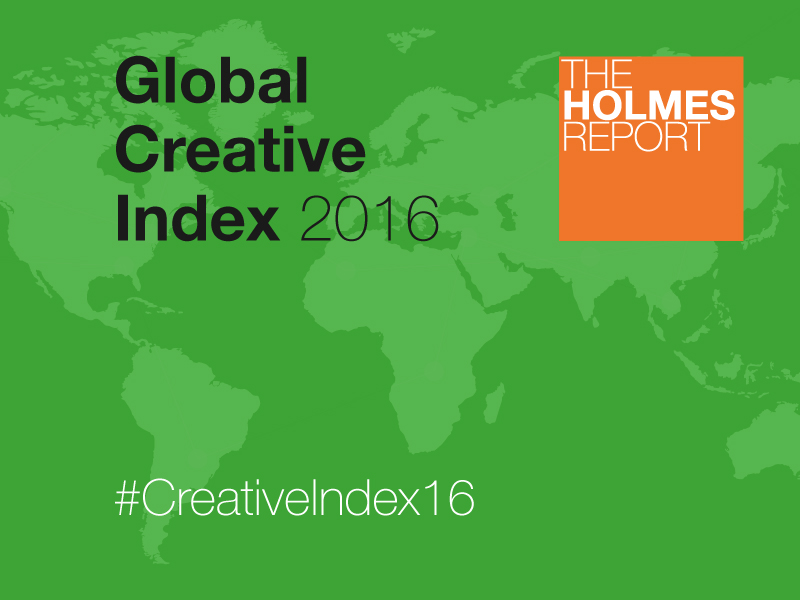 Edelman has taken top spot in the 2016 Global Creative Index, the first time that the world's largest PR firm has ranked first in the Holmes Report's annual benchmark of creativity in the public relations world.

The fifth edition of the Global Creative Index analyses entries and winners from more than 25 PR, digital and marketing awards programmes from around the world over a 12-month period.

Edelman prevailed by the slimmest of possible margins, scoring just one more point than second-placed Weber Shandwick, which ranked first last year. Edelman owed its success to a plethora of award-winning campaigns from across the world, most notably REI's #OptOutside programme, which also topped the campaign ranking as the most awarded PR program in the world (see below). Other award-winning efforts included work for Dove, Atlanta Hawks, CVS Health and Chipotle.

Ketchum jumped to third after ranking fifth in 2015, while WPP siblings Burson-Marsteller and Cohn & Wolfe each improved considerably to take fifth and seventh spot, respectively.

However, an alternative measure of agency creativity comes from weighting agency scores according to their staff size. Accordingly, the Holmes Report has again used a points per head calculation to identify which are, ‘pound for pound’, the most creative PR agencies in the world.
​ 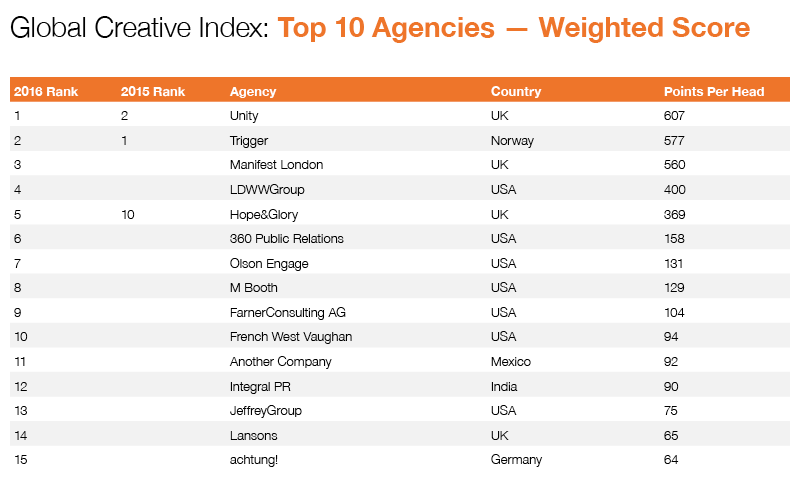 In 2016, this title is again taken by Unity — which makes it, quite remarkably, the fourth time in five years that the UK creative darlings have topped this ranking. Unity's dominance of the ranking again owes much to eye-catching work for less fashionable UK consumer brands, such as #FollowTheFaires and #ShowYourStrap for Marks & Spencer.

Norwegian agency Trigger, which topped the weighted ranking in 2015, came second, underlining its emergence as one of the world's most creative PR firms. UK boutique Manifest ranked third, while US corporate firm LDWWGroup and UK consumer powerhouse Hope&Glory round out the top five.

Most of the agencies on the weighted ranking are new entrants and also demonstrate a considerable degree of geographic breadth. There are four more US agencies in the top 10 (360PR, Olson Engage, M Booth and French West Vaughan), along with firms from Mexico (Another Company), India  (Integral PR) and Germany (Achtung) in the top 15.

REI's #OptOutside Tops Campaign Ranking
​
#OptOutside, the brave initiative that saw the outdoor retailer close all of its 143 US stores on Black Friday (the busiest shopping day of the year) and pay its 12,000 employees to take the day off instead of spending it indoors, has emerged as the most awarded PR campaign in the world, according to the Holmes Report’s 2016 Global Creative Index.

The Index analysed entries and winners from more than 25 PR award programmes from around the world, over a 12-month period, using the 2016 Cannes Lions as a cut-off point. Scores were weighted according to a Holmes Report formula that placed particular emphasis on Best of Show winners.

At Cannes, of course, #OptOutside took home metal in several categories. The campaign, which involved collaboration between Edelman, Venables Bell & Partners and Spark, won the coveted Titanium Grand Prix, along with the Promo & Activiation Grand Prix, and Gold Lions in Cyber and Direct. #OptOutside also won the Platinum SABRE for Best in Show at this year's North American SABRE Awards.
​

In second spot was another Cannes-winning campaign, the Swedish Tourist Association's Swedish Number effort from Ingo & Cohn & Wolfe, which allowed anyone, anywhere in the world, to call a phone number in Sweden and talk directly and immediately to a random Swede.

Always #LikeAGirl, which took top spot in last year's Creative Index, continued to perform well at award shows around the world, ahead of Visit Britain's Great Chinese Names for Great Britain, and Hemnet's House of Clicks.

The results, which rank the top 10 PR campaigns as determined by award shows, reinforce the importance of emotional resonance, whether inspired by social purpose or humour, in today's best public relations work. They also demonstrate that cultural relevance can make the difference between a good and great campaign.

Once again, there is a refreshing geographic diversity among the top 10 campaigns, featuring work from traditional powerhouse markets such as the US and UK, along with eye-catching programmes from Sweden, China, Italy and India.

For the first time, the Global Creative Index also ranks companies according to the performance of their campaigns in the various award shows that are tracked around the world. Unsurprisingly, perhaps, it is led by the world's two biggest consumer products companies, with P&G narrowly edging out Unilever at the top of the table.
​

P&G's haul is led by the Always' #LikeAGirl campaign, along with programs by Gillette and Ariel, while Unilever benefited from award-winning work from its Dove and Lipton brands. Consumer-focused brands dominate the ranking, with Vodafone, Heineken and McDonald's also scoring well.

The Global Creative Index analyses entries and winners from more than 25 PR award programmes from around the world, over a 12 month period, using the 2016 Cannes Lions as a cut-off point. Scores were weighted according to a Holmes Report formula that placed particular emphasis on Best of Show winners.