Please refer to our Privacy Policy for important information on the use of cookies. By continuing to use this website, you agree to this.
Home Longreads EMEA PR Industry: Race/Gender Pay & Leadership Gaps Revealed 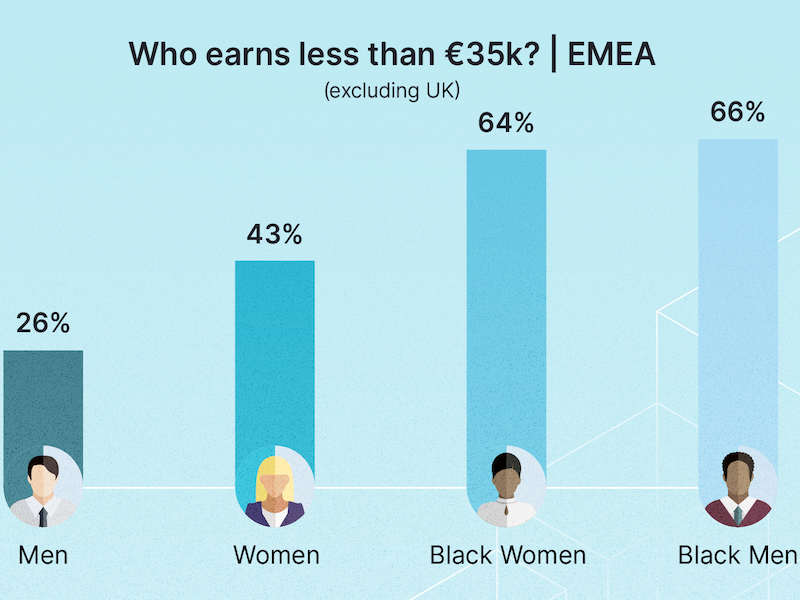 Exclusive data from PRovoke Media's Best Agencies to Work For research shows the extent of the equity gaps in the UK and across the region.

LONDON — Exclusive data from PRovoke Media's 2021 Best Agencies to Work For study reveals the extent of the pay and promotion gap at EMEA PR agencies, with far more men than women coming into the top income brackets and very low rates of Black and ethnic minority professionals in leadership roles.

The findings, based on extensive responses from well over 1,200 employees across 30 PR agencies around the region, provide a comprehensive picture of industry compensation, culture and working practices. The analysis, conducted by Rockland Dutton Research & Consulting, focuses on pay equity and broader diversity and inclusion trends across EMEA PR firms, as well as drivers of employee engagement across the region.

White men, Asian men, and white women are the only groups in this region who report earning €100,000 or more. There were no Asian men, however, reported earning more than €149,999 compared to 7% of white men and 3% of white women.

It's worth noting that in EMEA, differences in pay between men and women were less stark than in North America and Asia-Pacific. Although slightly more women report earning income under €34,999, men and women showed similarities overall in distributions of pay at every level. 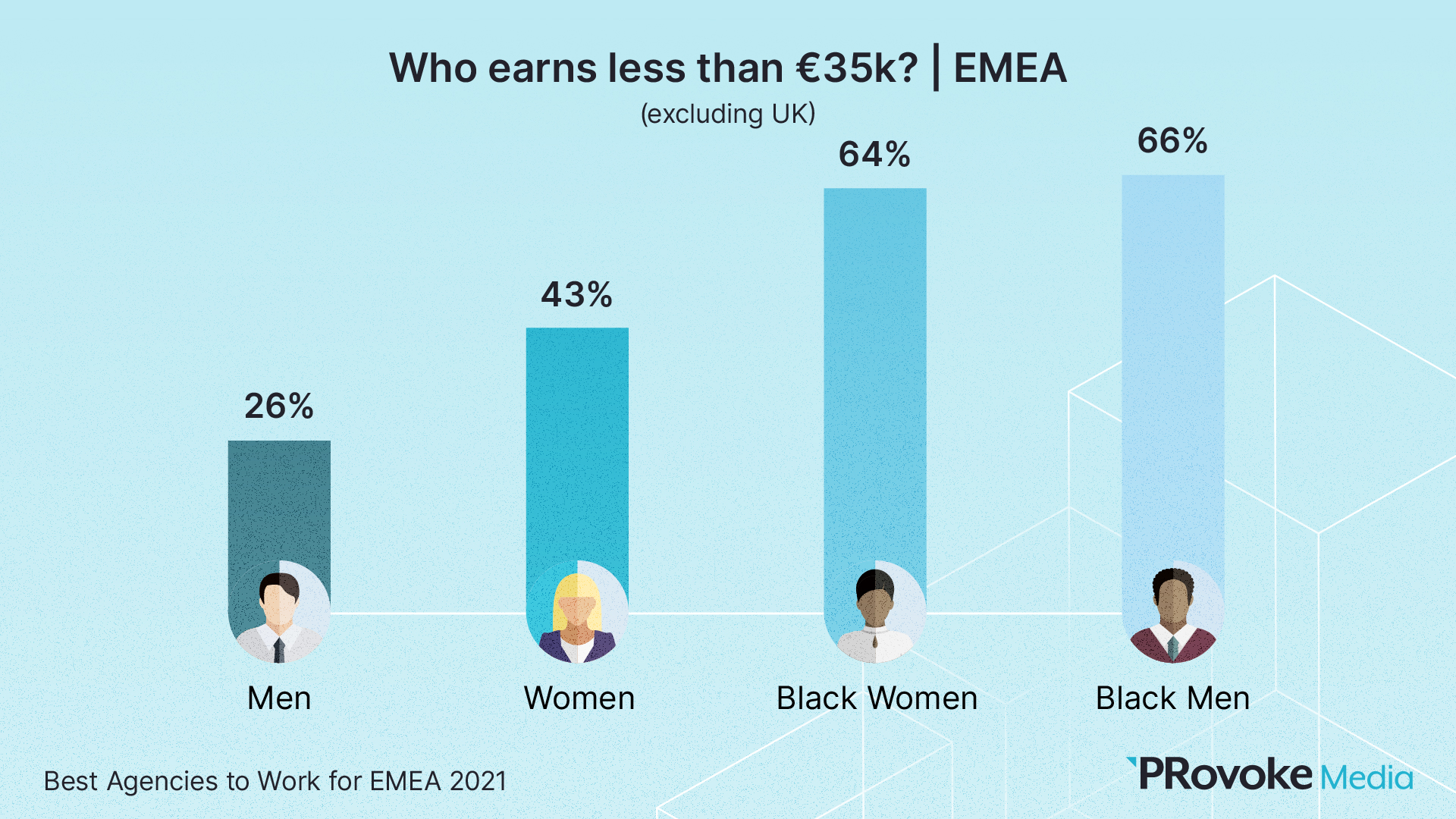 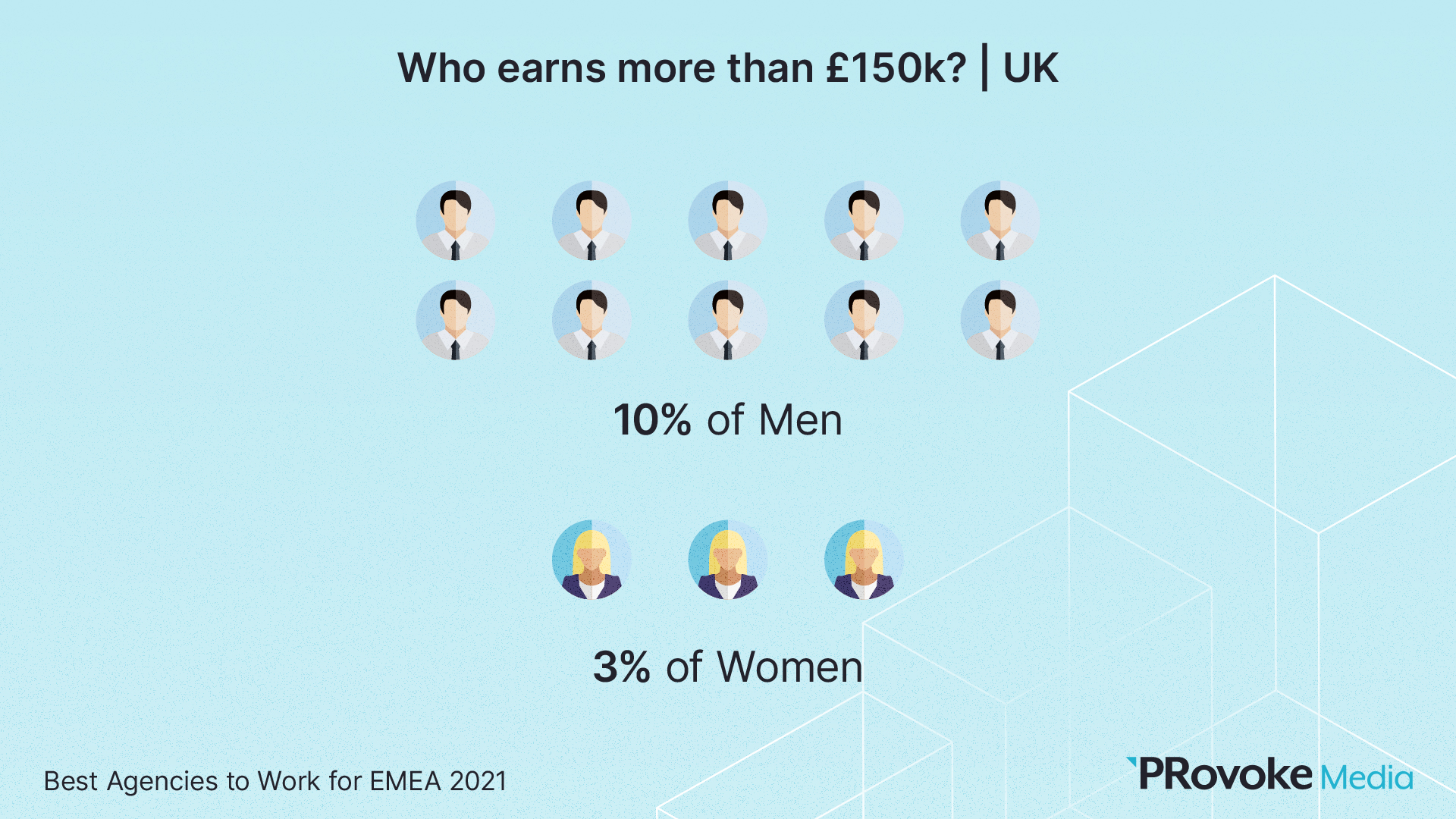 While men represent only 30% of the PR agency workforce across EMEA, 47% of executive vice president and senior vice president roles are held by men.

PR agency leadership across EMEA is dominated by white people – not surprisingly, since 79% of professionals across the region describe themselves as white. However, it’s notable that not even this low level of representation of Black and minority ethnic people across the agency landscape is mirrored at a senior level: white people make up 85% of executive vice president-level positions, rising to 94% of both partner and senior vice president-level roles. 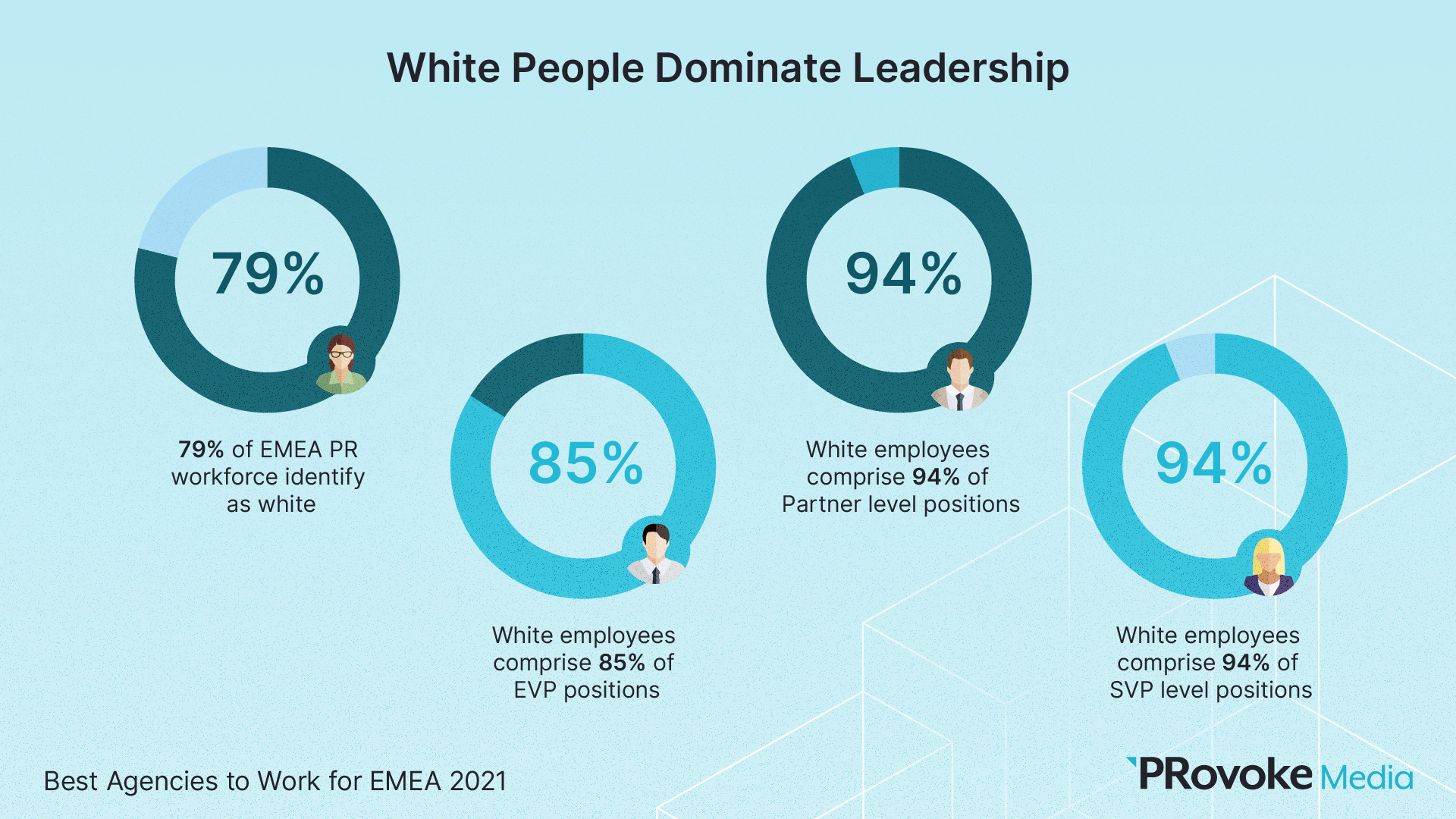 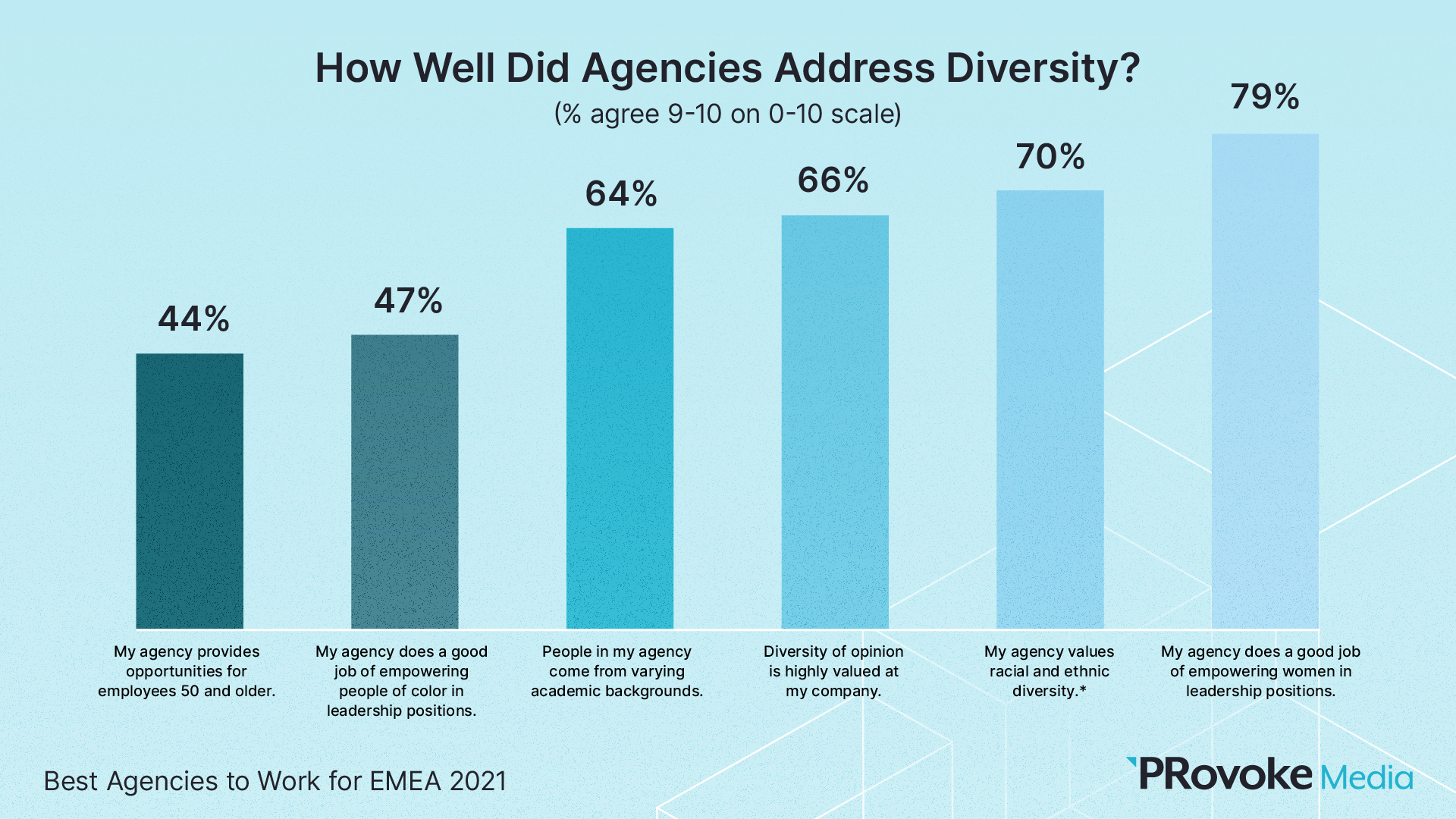 The ‘bring your whole self to work’ movement certainly seems to be gaining ground across EMEA in terms of agency culture, with 74% saying they feel comfortable being themselves when they are at work. And, despite the obstacles Covid has put in the way of agencies maintaining culture, 67% still describe the agency they work in as “a fun place to work”. Remote and hybrid working hasn’t completely eradicated the need to navigate office politics, however, with only half of respondents (52%) saying office politics were “rare” at their company. More encouraging, perhaps, in terms of diversity and inclusion in its broadest sense, is that only 22% say “it takes a certain type of person to fit in” at their agency. 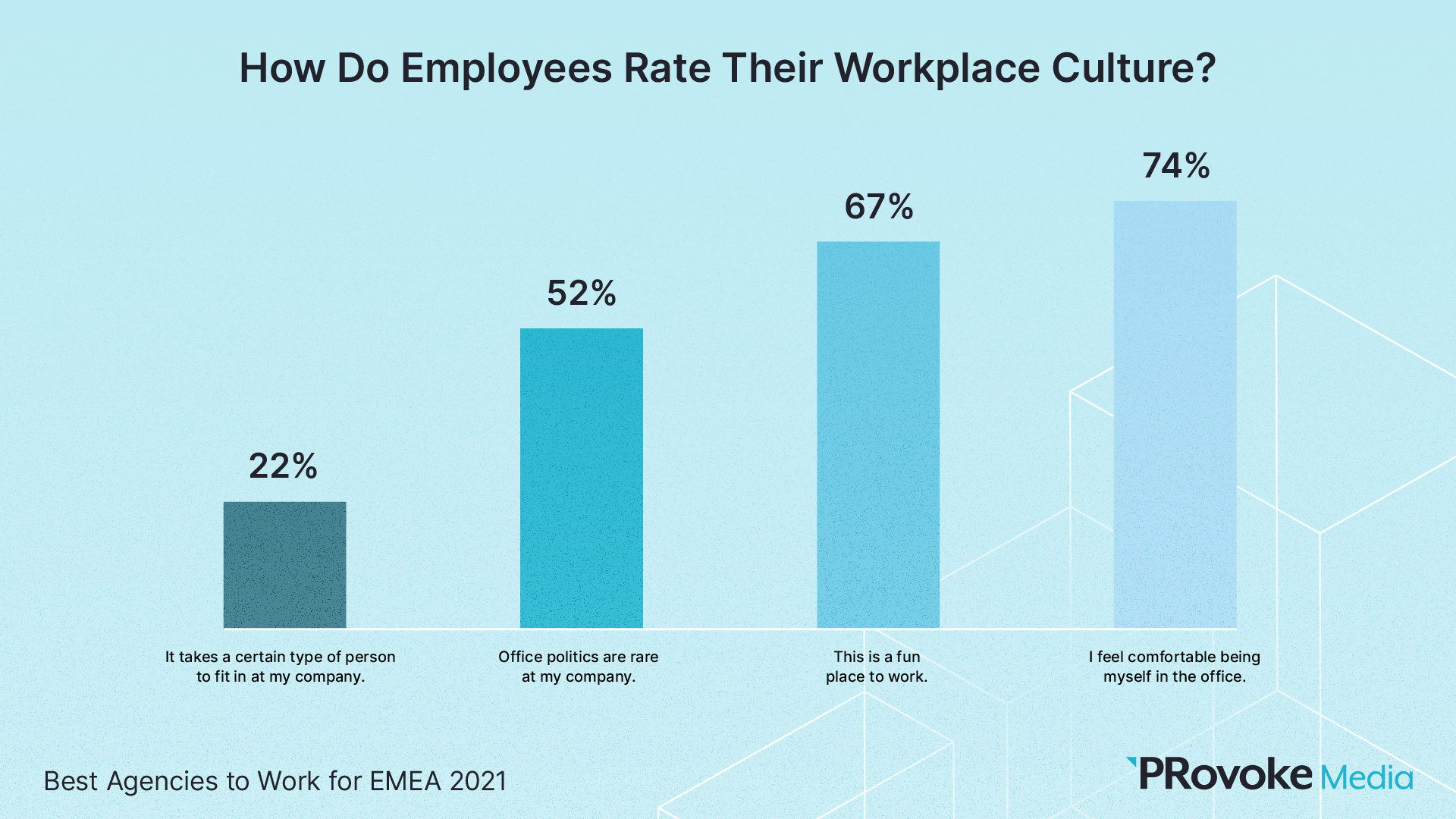 Satisfaction with compensation in EMEA is lower (in some cases significantly) than in other regions of the world. Fewer than half feel they are fairly compensated (47%), that their job is financially rewarding (43%), that their pay is competitive compared to other agencies (42%), and that those who contribute the most are the most highly rewarded (41%). Satisfaction with other aspects of compensation is slightly higher: 57% are satisfied with the amount of time off they get, and 59% say they feel free to take their holiday time whenever they want.

Although satisfaction with compensation is much lower than in other areas, that does not mean it is necessarily a strong driver of what makes employees feel most engaged with their agency. An analysis of each compensation attribute was undertaken to determine what aspects of compensation are stronger drivers of employee engagement relative to one another, and the results indicate that most employees are satisfied with, perhaps even expectant of, a strong benefits package. However, improved feelings of fair compensation and that one’s work is financially rewarding would contribute most to higher engagement levels. 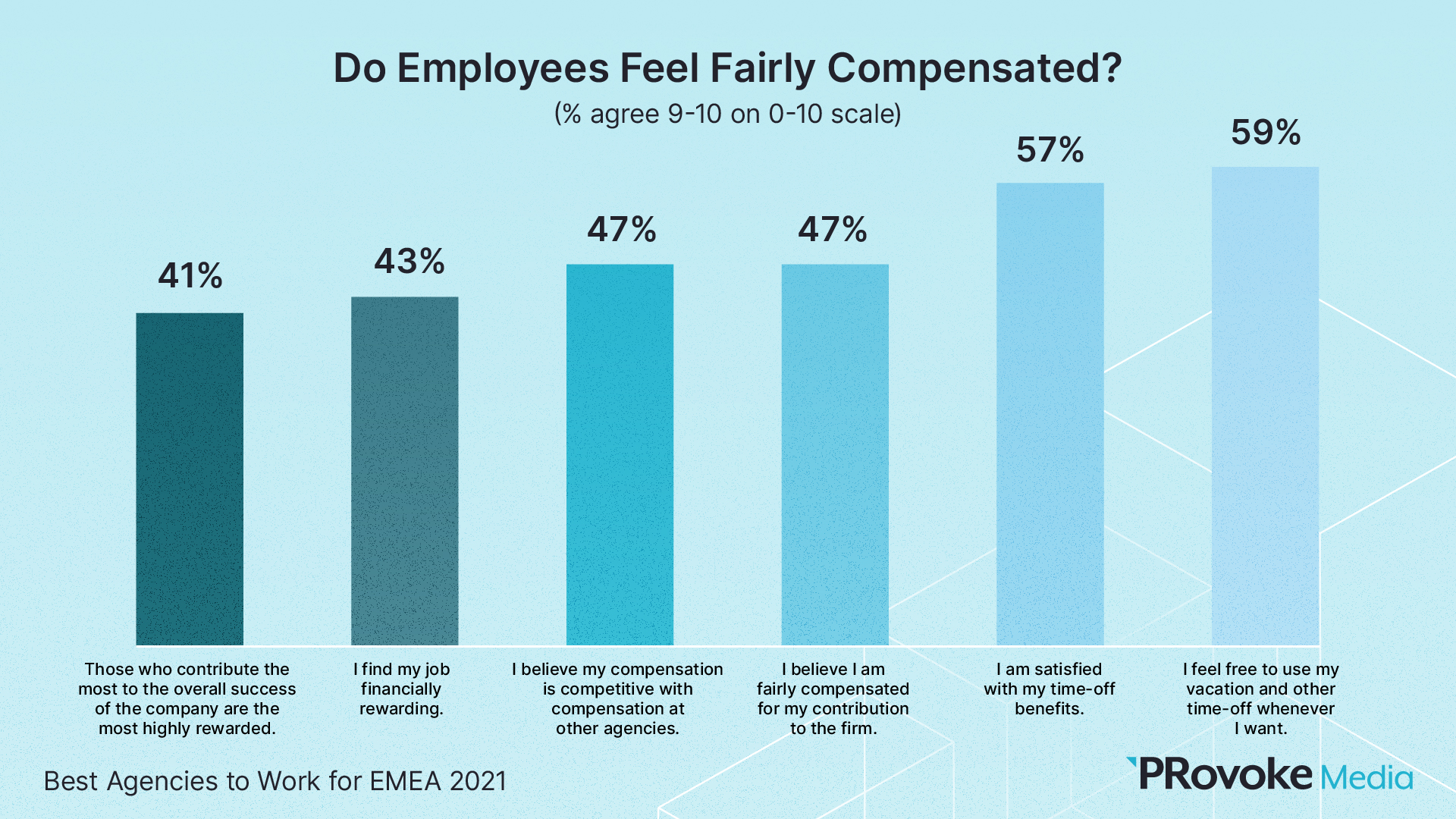 Employees are generally positive about how well their agencies responded to the pandemic. While the majority (80%) feel that their agency did well at prioritising health and safety, fewer were satisfied with their firm’s handling of mental health and isolation issues (71%). Most employees (79%) felt their firm had lived up to its values during the pandemic, while 77% said their agency had provided clear and forthright communications throughout the period, and 74% said their agency had helped employees address work/life issues with compassion and flexibility.

Communications, people, management, and client service are all important to driving employee engagement but performed well and do not warrant additional attention. Diversity and compensation, while performing less well relative to other attributes, were identified as things that are less important to driving employee engagement – again, because they are seen as an expectation more than a differentiator. 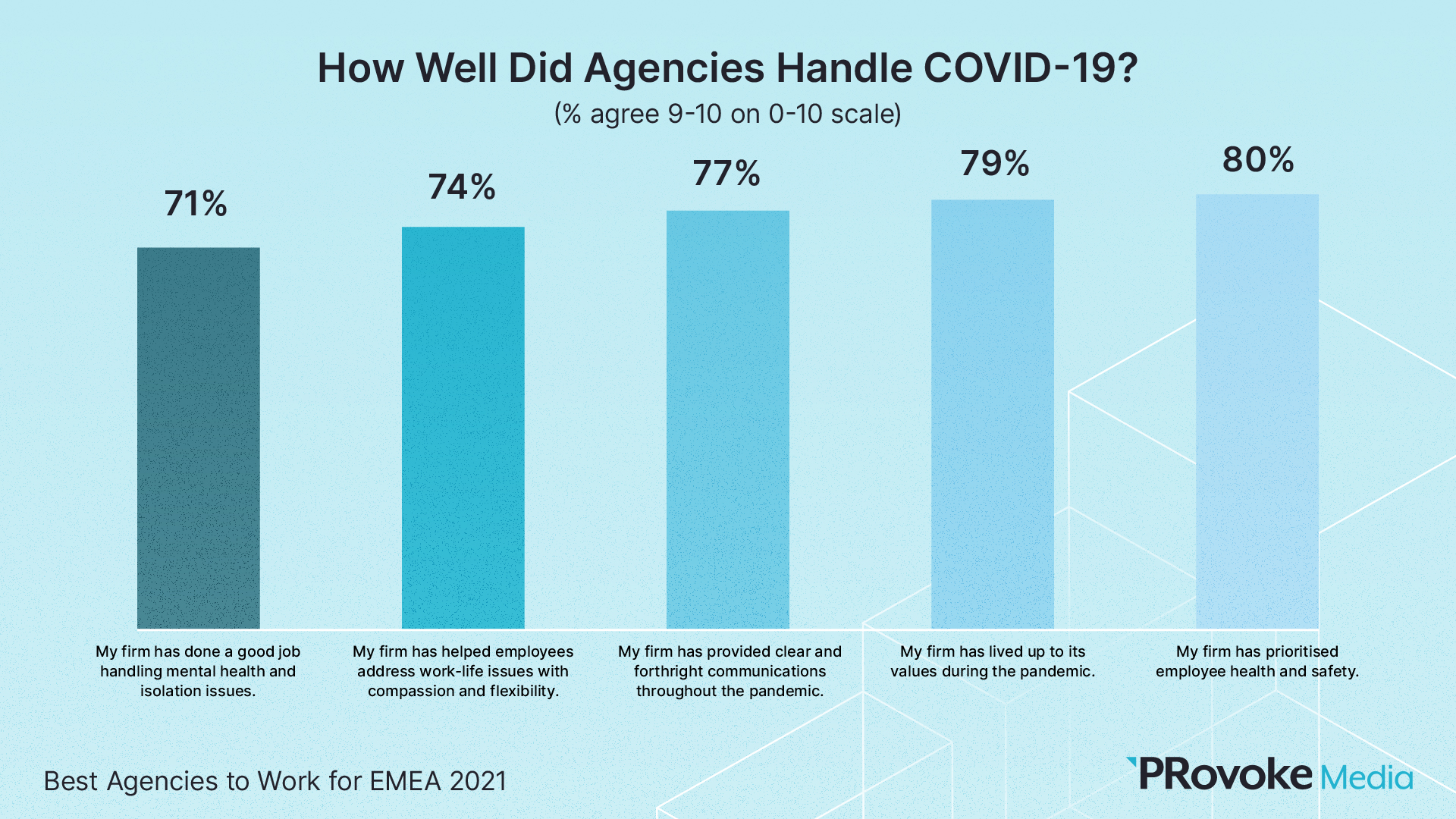 When comparing strength of correlation to engagement, the way agencies responded to Covid fell into the ‘tablestake’ category and so was a relatively less strong driver of engagement than other areas. Considering that every agency was affected, and that their response was required, it is logical that employees would expect this from their agency. This was true in other regions including North America and APAC.

The research showed the areas that should receive the most consideration – where they are more strongly correlated with driving employee engagement but are currently underperforming relative to other areas. By focusing on the attributes associated with work, empowerment, culture, and professional development there is an opportunity to increase employee engagement. 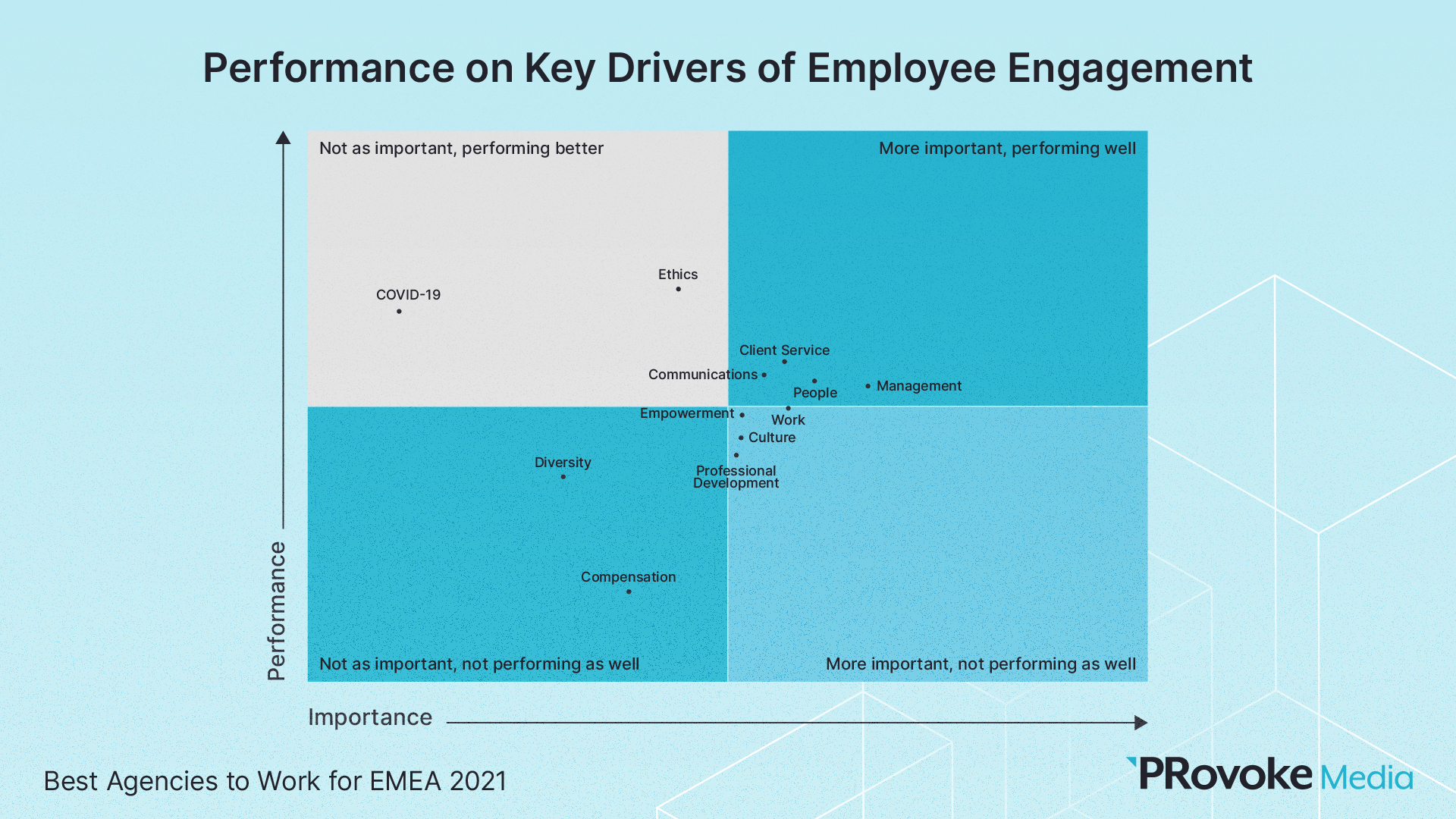