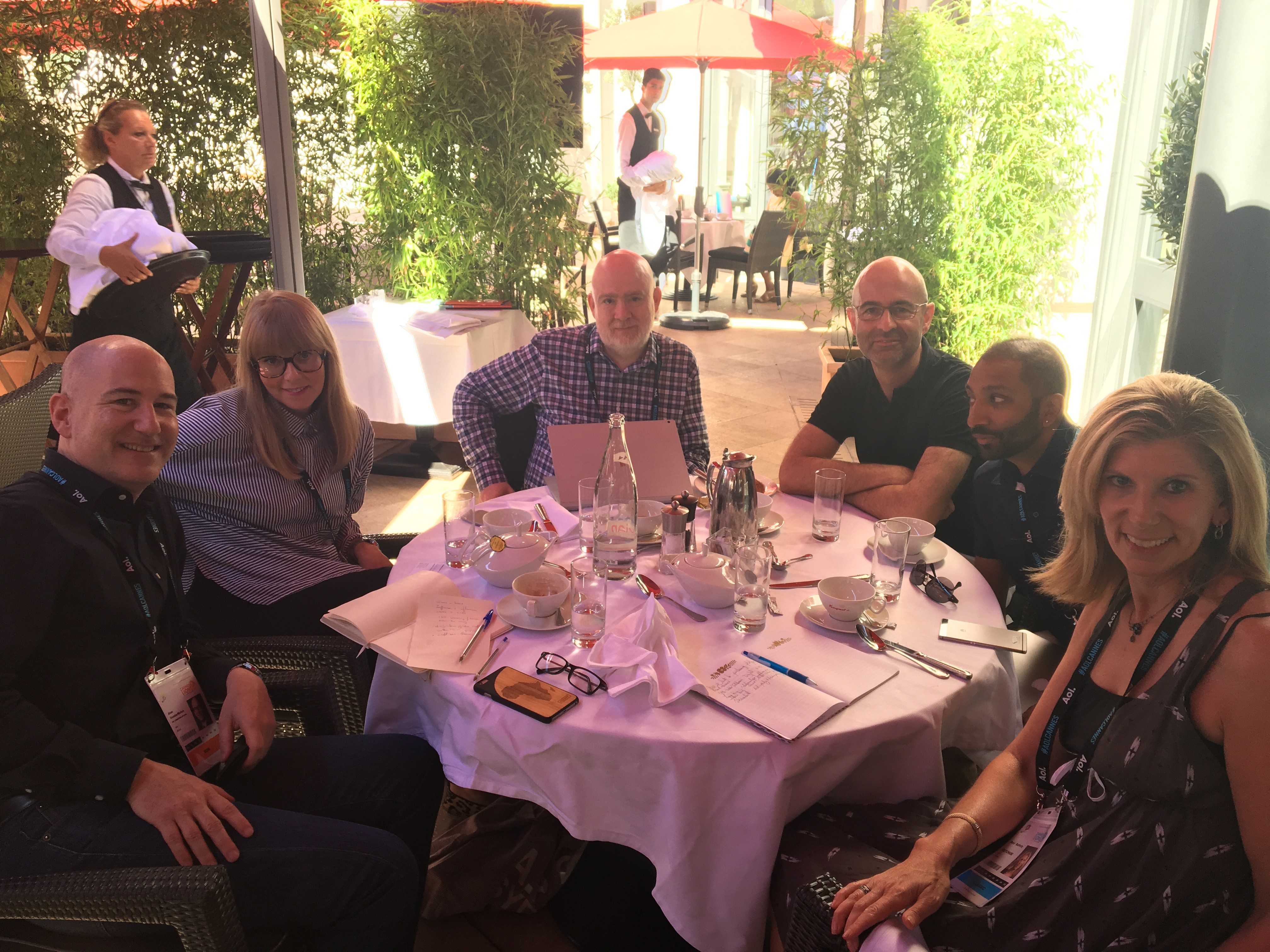 We're in Cannes for the marketers, but awards aren't the only way to reach them. Also, stop submitting your best work.

There’s nothing fun about writing the same story at the same time every year.

One of the reasons I got out of local newspaper journalism was the repetitive cycle of stories: it’s May, time to write about dog poop in the parks; it’s November, time to write about trains delayed by fallen leaves on the tracks (seriously, this happens in England, where nobody has yet detected any recurring pattern when it comes to fall and foliage).

And yet now I find myself on my way home from Cannes at the end of June, trying to come up with fresh and interesting things to say about the PR industry’s failure to dominate—or even, frankly, make even a minor impression on—the PR Lions.

Anyone hoping for a fresh narrative this year will be as disappointed as I am, because this year was actually worse—the worst I have covered, and the worst since 2010, when no PR agency won a Gold Lion.

So I suppose we have to figure out five new lessons—or perhaps they are simply subtle variations on the old lessons—to learn from Cannes this year.

1. CMOs are the reason we care, but awards are not the only way to reach them

At our breakfast roundtable, Ketchum’s Barri Rafferty summed up the reason PR firms continue to invest heavily in Cannes succinctly: “We come here for the CMOs.”

The justification for this is clear. The Global Communications Report research conducted earlier this year by The Holmes Report, USC’s Annenberg School, and a host of PR industry bodies, found that corporate communicators—historically the primary focus of PR agency new business development—expect to see their budgets grow by just 13 percent over the next five years (that’s about 2.5 percent per annum). Factor in inflation, and that’s essentially no growth at all, which means PR agencies are going to have to find growth elsewhere.

And those people are either in Cannes or paying inordinate attention to what goes on there.

The good news, according to Rafferty, is that there are ways to get marketers’ attention that don’t involve winning awards. “We look at Cannes as thought leadership—so we have panels, and that’s a great way to invite clients and media and have a strong voice here. And it’s the place where we get the most access to CMOs and get direct access to them. The awards are the third prong, and our creatives who come here focus on that.”

So it’s possible that all the content generated this year by PR agencies in Cannes—Edelman’s session with Will Smith; Burson-Marsteller’s dialogue with Politico about creativity in political campaigns; We Communications’ panel on innovation and purpose; Ketchum’s own session on “Content for All Ages”—has value even if PR agencies aren’t taking home as many awards as they should be, as long as we can find ways to ensure marketers are paying attention.

2. We won the war of ideas—but the spoils continue to elude us

I suppose it should have been reassuring to hear the comments of Richard Pinder, CEO for the UK and international at ad agency Crispin Porter + Bogusky, during our post-mortem breakfast at the Majestic.

“It’s interesting to hear PR people talk,” he interjected, after several minutes of self-flagellation by the PR execs at the table. “It’s nice to hear all of this because we think you guys are winning.”

Ad agencies, he said, were convinced that PR ideas were driving much of the creative output on display at Cannes. As a result, “We don’t talk about ourselves as an ad agency. You might use the word creative agency. I’d say 90 percent of what we do has an ad component, but that’s not always the critical component. There are things we have done where advertising was average but idea was spectacular. Most of all, we look for shareability, contagiousness, the sense that people want to be part of it.”

To Rafferty, that sounded familiar: “Our focus is the same—it’s engagement, shareability, persuasion.”

And ad agencies remain envious of PR agencies’ access to the C-suite, Pinder says—something many PR execs feel is overblown, and perhaps less helpful than it sounds because it’s the CMOs and CCOs who control the budgets, not the CEOs themselves.

Still, it’s nice to hear that a PR-driven approach is prevailing, even if it that has not yet translated into either trophies or—arguably more important—eight or nine figure budgets. Pinder acknowledges that and amends his initial thoughts: “We think you guys are winning. Not in awards, perhaps, but in life.”

3. Stop submitting your best work—send in what Cannes is looking for

Public relations agencies need to stop entering their best work at Cannes, and focus on entering work that is most likely to win. Basically, anything done pro bono for a non-profit client in an emerging market would be a solid investment.

Because this was another year in which the vast majority of Gold Lions winners came from charities or companies doing social purpose campaigns (with the obvious exception of the Grand Prix winner, a cynical piece of work with no redeeming social value and a focus on increasing market share by any means necessary).

So there were PR Lions for a campaign to raise awareness of organ donation in Belgium; for Colombia’s Ministry of Education turning bullets into pens; for a brewery protecting sea-life by creating edible six-pack rings; and for “The Last Mask,” which set out to force prosecution of acid attacks on women in Latin America.

There’s something adorably naïve, in this context, about Golin submitting its campaign for McDonald’s on the launch of the company’s new all-day breakfast menu.

It was, of course, a magnificent piece of work, combining incredible sophisticated use of data and analytics with an extraordinarily successful influencer activation and social media strategy—in many ways the epitome of what modern PR should be. But it is also the kind of work that Cannes juries apparently hate to reward: an American campaign for a big (and not particularly fashionable) American corporation.

Kat Thomas, a PR Lions judge and a former Gold Lion winner, who leads One Green Bean in Australia (and now also in the UK), concedes that there might be a bias toward feel-good campaigns. “There are 20 communicators in the room, and they have 25 years of experience, and so they might be a little bit jaded, so maybe they look for work that makes them feel good.”

And it’s no secret that the ad industry, in particular, likes to turn its creatives loose on pro bono campaigns that act as awards bait. Says Alan VanderMolen, president of international at WE Communications and a first-time attendee at the creativity festival, “I encourage young people to do pro bono work to push their creativity.” That work should be the focus for PR agencies hungry for Lions success.

4. If you don’t like Cannes’ criteria, work to change them

“We are crashing the ad industry’s annual beach party and we are getting sand kicked in our face,” says VanderMolen. “I’m outraged by the shortlist; I’m outraged by the winners. But the chair of the jury is an ad guy who works in PR and so we shouldn’t be surprised by it.”

VanderMolen is not alone in this reaction. Many of the PR people I talked to in the Palais and along the Croisette were perplexed by some of the Gold winning campaigns (and horrified by the Grand Prix winner).

Perhaps the most egregious example, in the eyes of many PR attendees at Cannes, was the Gold Lion presented to Publicis Italy for its viral Heineken video, a “prank” that was clearly either wholly scripted or scripted in that reality TV way that renders it entirely inauthentic. (Though many PR people had a similar problem with “Waiting Lines,” which one senior professional described to me as “two models play-acting a really powerful idea.”)

Another PR industry attendee—a former juror herself—was similarly dumbfounded by the Gold Lion presented to O Escritorio of Portugal for Emirates’ sponsorship of Benfica. The entire entry was essentially video of Emirates flight attendants performing a series of gestures (parodying in-flight safety instructions) before a Benfica soccer match. It was cute, but it’s hard to imagine it winning anything but an honorable mention in the experiential category at any other PR awards competition.

Kat Thomas, the token juror on our post-awards panel, explains at least part of the decision-making process: “I think the judges are being shown work they wish they had done themselves. Every third case, I think I wish we’d done that.”

So perhaps the PR judges are envious of the ad agencies, with their big budgets and their glossy production values. On the latter score, Thomas muses: “We need better technical craft from a campaign level and in our entries. Today we need different levels of craft to reach people.”

But in so far as great PR work is not winning Lions—and more superficial, stunt-driven work is dominating—the answer has to be for public relations people to encourage judges to focus on PR values when selecting the winners.

Says Pinder, “I’ve been coming here for 16 or 17 years now and I have heard the same conversation among many group. When the Chinese first came here, they asked how they were ever going to win at Cannes when nobody on the jury spoke Mandarin. It’s the same for every new entrant, this feeling that Cannes is stacked against them. But the Cannes of today is supposed to be festival of creativity. Everyone here gets to define that their own way, and you can define the PR category any way you want to.”

5. Look beyond the PR category

That’s one explanation for ad agencies enjoying so much more success in the PR category than PR firms have elsewhere, but there were plenty of signs this year that it doesn’t have to be that way. Indeed, many PR campaigns did better outside the PR category than they did within it.

Weber Shandwick was the PR industry’s biggest success story at this year’s Cannes: it won six Lions across four categories as lead agency, and was the PR partner on 24 Lions across 12 categories. Its Hemnet House of Clicks campaign (a SABRE winner from Prime in Sweden) picked up Lions in the PR, Cyber and Media categories. The “Field Trip to Mars” work for Lockheed Martin—Weber Shandwick was listed as PR partner—was recognized in PR, Creative Data, Entertainment, Media, Innovation, Cyber, and Direct categories.

Meanwhile, outdoor retailer REI and its agency partners—Edelman, Venables Bell & Partners, and Spark—won nine Lions, including the coveted Grand Prix in the Titanium category for #OptOutside, a campaign that was recently Best in Show at the North American SABRE dinner last month.

And Cohn & Wolfe scored in the Cyber, Direct, Media, Mobile and Promo & Activation categories (as well as PR) for its contribution to “The Swedish Number.”