Please refer to our Privacy Policy for important information on the use of cookies. By continuing to use this website, you agree to this.
Home Longreads PR Firms Ponder Whether To Counsel Or Cancel Fossil Fuel Clients 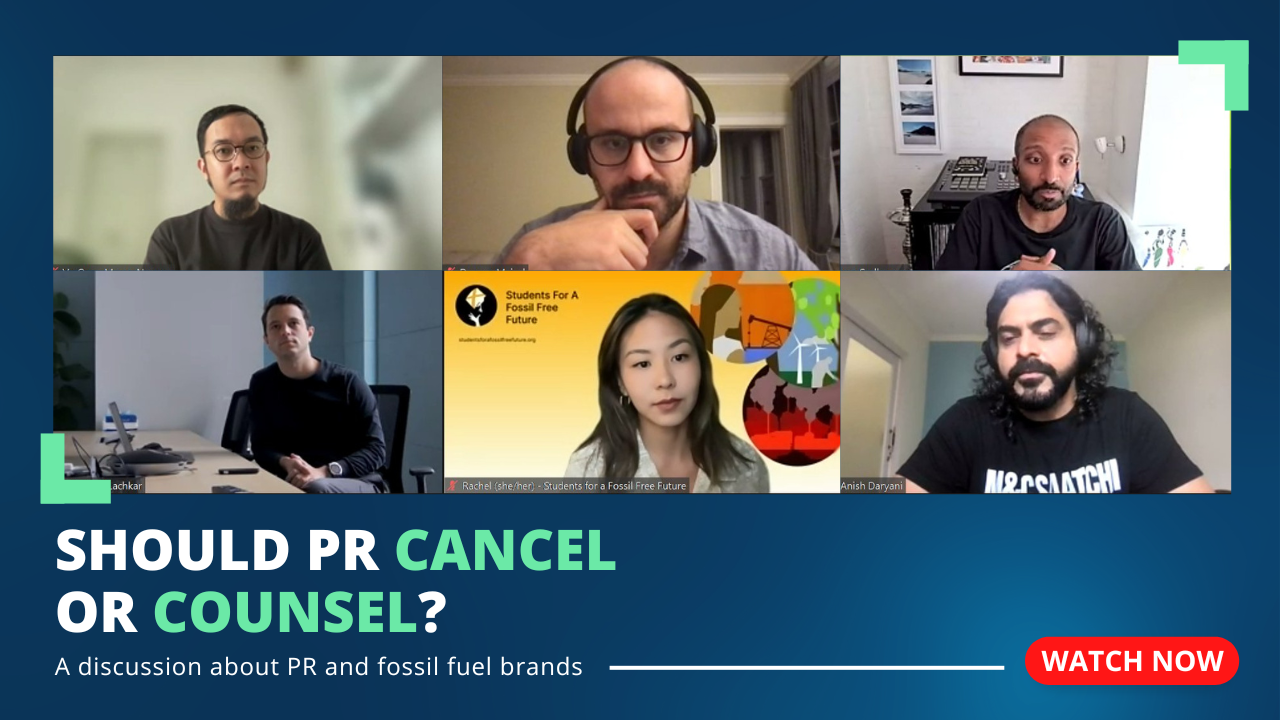 A recent discussion on whether Asia-Pacific PR firms are willing to decline fossil fuel work once again raises many of the ethical issues that have long dogged the industry.

Should PR firms cancel or counsel? It is a question that has long plagued much of the industry's work for less savoury clients, whether they are military regimes or big tobacco companies.

Recent events have sharpened the focus towards the public relations work being done on behalf of companies in the fossil fuels sector, thanks in large part to the efforts of US advocacy group Clean Creatives. The organization has led high-profile campaigns against several big agencies, and has called on all to decline future contracts with fossil fuel clients.

These efforts appear to be bearing fruit. At last month's UN General Assembly, secretary-general António Guterres criticised PR agencies for “raking in billions” to shield the fossil fuel industry from scrutiny. “Just as they did for the tobacco industry decades before, lobbyists and spin doctors have spewed harmful misinformation”, he said.

The week before that, US federal legislators ramped up their probe into PR firms’ relationships with Big Oil companies through a congressional hearing that investigated the industry’s role in spreading deceptive information. And, for good measure, Clean Creatives launched a poster campaign in Manhattan, calling on several major PR firms to "pick a side".

So far, more than 1000 creatives and 400 agencies have signed the Clean Creatives pledge, which now has its sights set on Asia-Pacific, where Vero became the first Southeast Asian PR consultancy to sign the pledge.

To discuss whether the PR industry should be steering clear of fossil fuel producers in Asia, the PRCA Asia-Pacific convened a panel with Vero and PRovoke Media, attracting considerable interest from more than 120 attendees across the region. You can watch the discussion here.

As Clean Creatives executive director Duncan Meisel put it, there are two key reasons why the campaign is so relevant in this region. "One is that it’s an area with a lot of growing fossil fuel consumption right now. Indonesia is the world’s biggest coal exporter, China is the world’s biggest coal consumer country-wise, and there’s an enormous amount of capital flowing in and out of the region to support fossil fuel development."

"At the same time," he added, "it’s one of the most climate vulnerable parts of the world." Jakarta, for example, is highly vulnerable to climate change, while millions of children in Bangladesh have been displaced because of flooding. "All these impacts are going to get worse," said Meisel. "Ultimately our take is that we think this is the most effective way to impact the business plans of fossil fuel companies."

Not everyone agrees. M&C Saatchi Indonesia founder and president director Anish Daryani questioned whether the agency industry really has enough influence to solve anything. "If you look at it we are completely at the bottom of the chain of the value system," he said. "If we direct the same energies towards getting engineering and mining companies to stop searching for sources of fossil fuels going forward, we’d be directing energies in a way where the problem starts rather than where the problem ends."

The notion that agencies are too insignificant to play a major role is debatable, especially where PR firms are concerned, given their outsize impact on policy and advocacy campaigns and the amount of money they make from such companies.

Indeed, Vero culture and brand VP Vu Quan Masse-Nguyen describes the PR agency role in terms akin to that of a 'conscientious objector'. "The budgets that fossil fuel companies put into our practices is huge, it’s literally billions of dollars. That’s influence. Taking that money is influence or refusing to take that money is influence. So I think on that end we do have more impact on the question and on how to change things than we can be led to believe."

Daryani also suggested another idea that attracts less backing in PR circles these days — that agencies are compelled to take on clients in the same manner that doctors and lawyers cannot turn away patients or clients. This has always been a difficult argument for agencies to rely on; doctors take an oath to serve patients, while defendants are guaranteed counsel by law. No such regulations exist when it comes to who agencies choose to take on, or not.

"Agencies make decisions every single day about what they are going to pitch for," responded Meisel. "We are just encouraging agencies to add this to their criteria because it is at a level of urgency and literal emergency that I think makes it a different kind of case."

If PR firms only worked with clients that boasted unblemished reputations, it would not be much of an industry. And that reflects the tension that often underpins sensitive PR assignments, where ‘ethical' counsel can often help steer an ‘unethical' client in the right direction, towards reform and — hopefully — better behaviour.

That much, at least, is the most credible argument for counselling rather than cancelling, but it has given rise to considerable angst about PR campaigns over the past century, whether Edward de Bernays' efforts to manipulate women into smoking, to more recent examples such as PR support for governments in Saudi Arabia and Hong Kong, and Bell Pottinger's memorable implosion after supporting 'state capture' in South Africa.

Seen through this lens, climate change is the latest test of the PR industry's ethical credentials. And it bears all the usual hallmarks, particularly the charge that PR campaigns help to distract from the significant harm being wrought by major energy companies. This is what the UN's Guterres means when he describes "misinformation", at a time when big oil income reaches record annual levels of $4tn, amid soaring energy prices.

PR firms can credibly claim that their work does not specifically promote fossil fuels, but the IEA estimates that clean energy investment accounts for just 5% of global oil and gas company capital expenditure. Even if PR agencies are only working on renewables and sustainability, that would appear to be a very small portion of the pie when it comes to where energy majors are focusing the bulk of their attention.

"It’s very interesting when you see a lot of fossil fuel campaigns," says Meisel. "Sometimes it often seems like they’re not quite selling anything in particular. It’s the general idea of sustainability. They’re not saying we’re really excited for you to buy more oil — it’s at this level of concepts and feelings. It’s very abstract from their business practices."

Meisel believes that is a deliberate ploy "to limit the political room for governments to regulate fossil fuel production and conception."

"The target is influential decision makers so that there’s not as much room for climate action," he continues.  "The reputation of your company being responsible or irresponsible has a great deal to do with whether or not governments are willing to regulate your business."

Specifically, Meisel contends that these types of campaigns are often rolled out when legislation is being considered. "That’s when most of this activity begins to occur and to me that’s a pattern that suggests that it’s an effort to disrupt the really meaningful steps we need to take by governments to stop the climate emergency."

Yet, the idea that this emergency can be solved without the cooperation of energy companies strikes many as fanciful. "I think by going against clients and brands that have their origins in fossil fuels, we are sort of closing eyes in terms of the opportunities that lie in working with them," explains Daryani. "We are making them the cause of the problem rather than about the solution and there is a big opportunity in making them a part of the solution."

That, according to Daryani, means that the marketing industry has a responsibility to refuse to work with brands that are greenwashing, and must focus its efforts instead on genuine sustainability efforts. "But we are denying ourselves the opportunity to play that role by intervening and educating the client about the realities and reminding them of their responsibilities if we refuse to work with them. That’s all the more reason we should work with them — but I will never get to do that if I walk out from the beginning saying I don’t want to talk to you because you smell of fuel."

Many of these ethical quandaries could once have been easily contained. But the rise of social media and the impact of employee activism means that those days are long gone. PR firms now make decisions based on who their employees want to work for, and oil companies rarely appear to be top of that list.

"When we think about policies and regulations they really do not exist in a vacuum, they reflect public attitudes and beliefs that the PR industry really has a huge power in shaping," said Rachel Cheang, divestment organizer at Students for a Fossil Free Future, a coalition of Singaporean students.

Cheang, who describes climate change "as the most significant creative challenge of our lives", is unconvinced that Big Oil wants to be part of the solution, citing an Eco Business study that found 60% of communications from companies in the sector were about green and clean energy, while only 12% of their investments were going into renewables.

Meanwhile, the Clean Creatives pledge itself is a far easier option for agencies that don't already work with fossil fuel companies, as opposed to major players for whom the sector represents a significant proportion of their revenues, and plenty of jobs. And in Asia, the situation is compounded by the idea that climate change action opposes economic development in countries that need it the most.

"We want to bring the education on this topic to professionals in our industry," says Nguyen-Masse of these challenges. "When we do that I believe that professionals do have an impact now on how their employers work."

Many firms, no doubt, think that a clear stance will help them attract and keep better talent, in an industry that has long been plagued by high turnover. Said Vero chief operating officer Raphael Lachkar: "There will be benefits in how the workforce looks at employers and this should drive bigger corporate actors, bigger network agencies to take a stand on the issue."

"I think the youth of our time are becoming more environmentally aware and conscious of their individual power in holding large industries accountable," agreed Cheang. "There is always going to be space for youth to make their own decisions when stepping into the field and saying 'this is where I want to be that aligns best with my values'."

So it goes for agencies and corporates too, who have made much of their 'values' in recent years, albeit less often at the expense of actual profits. It is easy to make glib observations about the company the PR industry keeps, but far more difficult for firms to wean themselves off their own dependence on harmful actors, particularly when they can clearly play an important role in improving corporate behaviour. Ultimately, if the PR industry wants to credibly argue for counselling versus cancelling, then it needs to be prepared to counter the scrutiny, criticism and pressure that will surely follow.