Please refer to our Privacy Policy for important information on the use of cookies. By continuing to use this website, you agree to this.
Home Longreads Weber Shandwick And Tin Man Top 2017 Global Creative Index 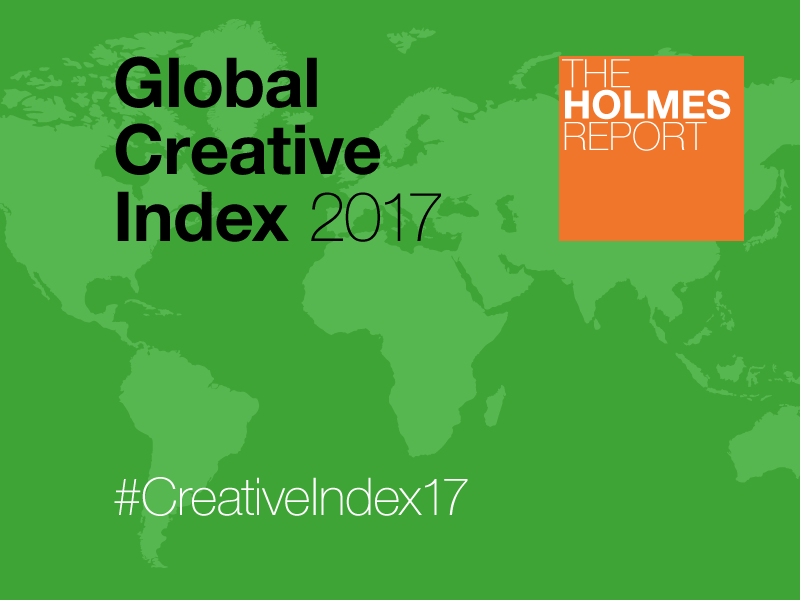 Weber Shandwick has returned to top spot in the 2017 edition of the Global Creative Index, marking the second time in three years that the Interpublic PR firm has ranked first in the Holmes Report's annual benchmark of creativity in the public relations world.

The sixth edition of the Global Creative Index analyses entries and winners from more than 25 PR, digital and marketing awards programmes from around the world over a 12-month period. This year, the formula was revamped to take into account the expansion of 'public relations' work across multiple categories at advertising-oriented shows such as the Cannes Lions, with the methodology favouring agencies designated for 'idea-creation'.

That helped Weber Shandwick prevail at the top of the ranking over Ogilvy and Edelman, which ranked first last year. Weber Shandwick's performance was powered by the Daughters of Mother India campaign for Vibha Bakshi, a courageous effort to address violence against women in India — which swept awards shows in 2016 and 2017, in the process topping the campaign ranking as the most awarded PR program in the world (see below). Other key award-winning efforts included the #BrutalCut campaign for ActionAid UK, Pearson's Alphabet for Illiteracy and work for Vauxhall, Universal Pictures and Mattel.

Ogilvy rebounded to second spot after dropping to fourth last year following first-place finishes in 2015 and 2014. The WPP firm benefited from a range of campaigns from across the world, including the 'Mein Kamp - Gegen Rechts' effort that took Best of Show at this year's SABRE Awards EMEA.

Edelman dropped to third after taking top spot last year, while MSL jumped two spots from sixth to fourth. Elsewhere, H+K Strategies, FleishmanHillard and Porter Novelli all improve by one spot, while BBDO makes its debut appearance in the top 10. 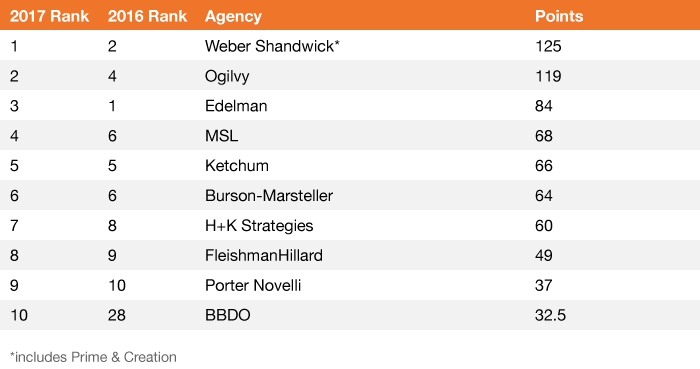 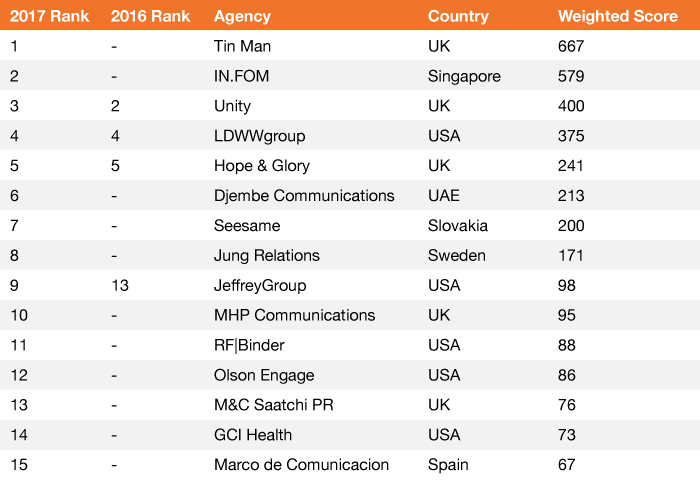 In 2017, this title is taken by three-year-old UK boutique Tin Man. Remarkably, Tin Man is part-owned by third-ranked Unity, which itself has led the weighted table for four of the past five years. Both firms, unsurprisingly, were shortlisted for Creative Consultancy of the Year honours in EMEA this year.

Singapore's IN.FOM, which ranked fourth in 2015, takes second spot, with the top five rounded out for the second consecutive year by US consultancy LDWWgroup and perennial UK creative powerhouse Hope&Glory.

The weighted table also reflects considerable geographic diversity beyond the US and UK — there are also agencies from Singapore (IN.FOM), UAE/Africa (Djembe), Slovakia (Seesame), and Spain (Marco). Rather surprisingly, Scandinavia's status as a premier creative market is only reflected by one firm — Sweden's Jung Relations.

Daughters of Mother India, a Weber Shandwick campaign supporting the documentary by Vibha Bakshi, emerged as the most-awarded PR program of the past 12 months according to the Holmes Report's 2017 Global Creative Index. The brave campaign addressed the police response to sexual crime in India, and saw Weber Shandwick use the documentary as a basis for training to help police better deal with rape situations.

The Index analysed entries and winners from more than 25 PR award programmes from around the world, over a 12-month period, using the 2017 Cannes Lions as a cut-off point. Scores were weighted according to a Holmes Report formula that placed particular emphasis on Best of Show winners, while also taking into account the expansion of 'public relations' work across multiple categories at advertising-oriented shows such as the Cannes Lions.

In second spot was Philips Breathless Choir by OneVoice agencies Ketchum and FleishmanHillard, ahead of the Swedish Tourist Association's Swedish Number effort from Ingo & Cohn & Wolfe, both of which continued to perform well at award shows this year after cracking last year's top 10.

The results, which rank the top 10 PR campaigns as determined by award shows, reflect how brand 'purpose' has become a key ingredient in award-winning work, with many of the campaigns focusing on broader social issues. Our recent longread explores whether brand purpose has reached the end of the line.

P&G retains top spot in the Global Creative Index's ranking of companies according to the performance of their campaigns in the various award shows that are tracked around the world. The FMCG giant again prevails over rival Unilever at the top of the table.

P&G's haul is led by the impressive Share the Load campaign for Ariel in India, along with continued work for the #LikeAGirl theme that has been running for several years now.

The Global Creative Index analyses entries and winners from more than 25 PR award programmes from around the world, over a 12 month period, using the 2017 Cannes Lions as a cut-off point. Scores were weighted according to a Holmes Report formula that placed particular emphasis on Best of Show winners. 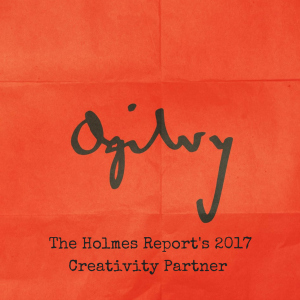