Best Agency to Work For is possibly the only predictive award the Holmes Report gives out. By this, we mean there’s a direct correlation between the agencies on this list and those that take home our biggest honor (often times at some point in the future) — Agency of the Year recognition. That’s, in part, because firms that take culture seriously tend to attract and retain smart and creative talent who, in turn, produce stellar work. It’s a simple formula but one that’s easily overlooked amid the breathless pace and tremendous pressures that are a seemingly inevitable reality of agency life. But this pace is exactly why agencies shouldn’t underestimate the power its culture has on the work its employees produce.

The firms recognized on the rankings include a few holding companies firms, but mostly independents. Some have generous benefits, others prioritize professional development or interesting work that keeps talent engaged. We’re working on an in-depth feature that will more deeply explore the factors that drive employee engagement within our industry. All participating firms can also obtain their own results mapped against either the industry or its competitive set. (For more information on this, see FAQ.)

Trophies for the top ranking agencies were presented at the 2018 North American SABRE Awards in New York on May 1.

BEST AGENCY TO WORK FOR, LARGE (201+ employees)
#1 W2O Group (Independent)
When a firm grows as quickly as W2O Group has (132% growth in five years to top $140m in revenues), some turbulence around culture and engagement is expected. Yet this year, W2O Group defied odds and, amid staggering growth, managed to top our Best Agencies to Work For ranking #1 among large firms. The secret to its success is actually deceptively simple: the firms’ management asked employees what they wanted and then worked to make that happen. Among these, last year the firm launched its “4th Trimester” program that expanded paid leave for new parents to nine to 12 weeks and connected new parents to a personal coach for three months to help them with the transition back. Other new policies include unlimited, flexible PTO and a continuation of its five-week sabbatical program that kicks in after five years at the company.

The culture at W2O is famously competitive and entrepreneurial — but that also means new ideas and disruption are welcome from any level within the organization. This is how, what was an healthcare boutique in 2002, transformed into a large agency that’s on the forefront of applying digital analytics to communications. — AaS

BEST AGENCY TO WORK FOR, MIDSIZE (121 - 200 employees)
#1 PAN Communications (Independent)
The long-standing Best Agency to Work For favorite takes the top spot on its fourth year on the list. The win coincides with a moment where PAN’s business  performance and creative caliber are also exceptionally high. (The firm grew 14% to $17.7m last year and now has more than 140 people across offices in Boston, San Francisco, Orlando and New York.)

PAN strong performance on Best Agencies to Work For over the last four years seem to confirm  that an engaged workforce yields great business performance and great work. Recognizing and promoting employees is part of PAN’s workplace culture, rather than a milestone reserved for annual reviews. The fast-pace of tech PR is balanced with generous time-off initiatives including at least 15 paid days (including an agency-wide shut-down between Christmas and New Years), plus 10 paid holidays, one floating holiday, employee’s birthday off, 8 hours of volunteer time, and 9 sick days per year.

The firm’s culture is casual — jeans, PAN-branded Patagonia sweaters, Fitbits for all and opportunities for extra cash via new business and employee referral programs. Efforts are made to clear out the office by 6pm — and 1pm on Summer Fridays and 3:30pm on other Fridays throughout the year. — AaS

BEST AGENCY TO WORK FOR, SMALL (71 - 120 employees)
#1 Walker Sands (Independent)
We've taken notice to Chicago's Walker Sands for its respectable growth (about 8% in 2017) combined with award-winning work —  and its engaged culture. The 17-year-old firm is particularly progressive around diversity and inclusion, which includes several initiatives, like bringing in Xavier Ramey to speak and Unconscious Bias training from Pooja Kothari. There's a fun element to this as well. This year, the firm purchased 20 tickets to Black Panther and had a lunch discussion on the film the following day. The firm takes weekly TinyPulse surveys for anonymous feedback. In addition to other standard perks, the firm pays for employees to obtain their MBA and has a points program for SAE+ that can be exchanged for more time-off, Amazon Prime memberships or personal classes (not related to work). — AaS

For the second consecutive year, the Southern California public affairs shop Davies tops our boutique Best Agencies to Work For (the firm won in 2017 and 2015, was shortlisted in 2016). The firm’s 34 employees are spread across offices Santa Barbara, Washington D.C., Los Angeles. What has kept Davies at the top of the running year-after-year is the commitment CEO John Davies has shown to professional development. For instance, the firm's COO Caitlin Bidwell started as the agency receptionist in 2008. Six months into her tenure, Davies invited her to join a project team, which she declined "because she said she wants to run the company." He developed a multi-year training program designed around her ambition and by 2014 she achieved the COO title. There are numerous other stories like this where Davies identifies talent and builds a career trajectory around them. "If we can train someone to do a job, we don't hire for that job," Davies said. "And we don't have people doing repeatable tasks — when you have people doing entry level work, it's hard to find good people."

When it comes to tangible benefits, Davies covers 100% employee premiums for medical, dental and vision insurance — and partially funds employee Health Savings Accounts. The firm also has policy of Real Profit Sharing, which means staff can earn up to a 100% performance bonus (based on profitability, client satisfaction and individual contributions), on top of an already competitive salary. Company financials are also “open book” — this means that every quarter, financials are presented to and reviewed by all staff, including all expenses, all profits and all challenges and strengths. Autonomy is also highly-valued with employees setting their own hours — with performance being measured by results, not time in the office. The firm makes a concerted effort to recruit diverse management (women represent 50% of the agency leaders) and equal pay is a priority for women and ethnic minorities. — AaS 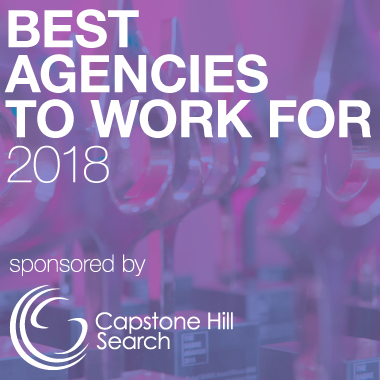