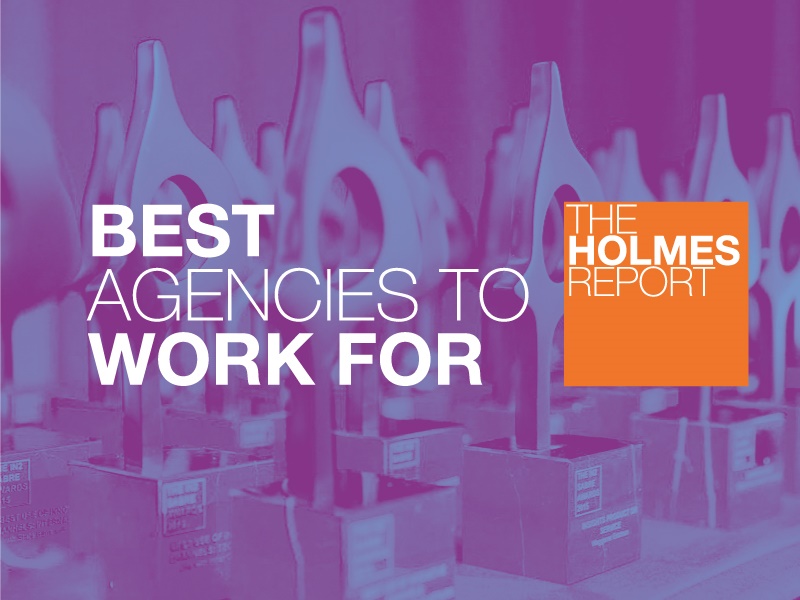 Best Agency to Work For is possibly the only predictive award the Holmes Report gives out. By this, we mean there’s a direct correlation between the agencies on this list and those that take home our biggest honor (often times at some point in the future) — Agency of the Year. That’s, in part, because firms that take culture seriously tend to attract and retain smart and creative talent who, in turn, produce stellar work. It’s a simple formula but one that’s easily overlooked amid the breathless pace and tremendous pressures that are an  inevitable reality of agency life. But this pace is exactly why agencies shouldn’t underestimate the power its culture has on the work its employees produce.

The firms recognized on the rankings include a few holding companies firms, but mostly independents. Some have generous benefits, others prioritize professional development or interesting work that keeps talent engaged. We’re working on a series of stories explore the factors that drive recruitment, retention and engagement within our industry. All participating firms can also obtain their own results mapped against either the industry or its competitive set. (For more information on this, see FAQ.)

Trophies for the top ranking agencies were presented at the 2019 North American SABRE Awards in New York on Tuesday, May 7. Tickets can be purchased here.

BEST AGENCY TO WORK FOR, LARGE
#1 W2O Group (Independent)
For the second year in a row, W2O has landed on the top spot for Best Agencies to Work For in North America. The agency has undergone astonishing growth (up 22% to $177m) and change over the last few years. Of course, this has been extraordinarily challenging for the organization's culture. But W2O's management has taken steps to strengthen its recruiting and retention policies amid the frenzy of its rapid growth. Deborah Hankin joined a year ago as chief people officer, having previously worked at SYPartners and WPP.

The firm also maintains a single P&L — #OneTeamOneDream, as it is branded internally — and has remained steadfast in this commitment even while integrating many of its acquisitions. And rather than expecting its acquisitions to conform to its culture, W2O has expanded its policies to align with the smaller firms it brought in. For instance, its new work-from-home policy was adopted from Sentient, which W2O acquired at the end of 2016.

The secret to its success is remains deceptively simple: the firms’ management asked employees what they wanted and then worked to make that happen. Among these, the firm launched its “4th Trimester” program that expanded paid leave for new parents to nine to 12 weeks and connected new parents to a personal coach for three months to help them with the transition back. Other policies include flexible PTO, a five-week sabbatical program that kicks in after five years at the company, plus a continued focus on D&I. — AaS

BEST AGENCY TO WORK FOR, MIDSIZE
#1 GCI Health (WPP)
Healthcare powerhouse GCI made the decision last year to talk about “people at the center.” It's clear "the people" don't just include patients, physicians, pharmacists and other influencers — it includes its own talent. The concept of work-life balance is empty and misleading without tangible policies to support it. That's where GCI Health shines. Let's look first at paid time off: GCI closes between Christmas and New Year's, adding an additional three vacation to the 15 to 25 days employees are allotted. This is on top of 10 sick days, 10 holidays and three personal days. The agency offers telecommuting, flexible work schedules, summer Fridays and constantly monitors the team's work hours to guard against burnout. As an appreciation gift at the end of the year and half way through the year, employees are treated to dinner with their family or friends at the restaurant of their choice, among other perks.

GCI also takes the professional development seriously. A recent workshop for mid-level staff featured Joe Lazauskas of Contently, who authored The Storytelling Edge and challenges organizations to think differently about how they can cut through the clutter and bring their stories to life. During the full-day session, staff, who are on the frontlines of content development, explored new channels and formats to tell clients’ stories in breakthrough ways. The firm also has access to WPP’s Maestro executive training, which brings together senior leaders across the WPP network for week-long intensive sessions designed to enhance strategic listening skills. Each year, several of the firm's rising stars are sent. GCI also develops customized growth plans for each employee. One of its culture-building initiatives is its volunteer program, Do Something Different in Our Communities in which employees donate time, materials and resources. This year, GCI supported a number of organizations across its US offices in response. — AaS

BEST AGENCY TO WORK FOR, SMALL
#1 Highwire (Independent)
It's been more than a decade since Highwire burst onto the tech PR scene, making its mark as one of the strongest enterprise tech and security agencies. As the firm has grown to nearly $20m, its cultural and engagement initiatives have also evolved to reflect changing employee expectations. In 2018, Highwire created a Diversity & Inclusion team with the objective of leveraging unique characteristics, perspectives and life experiences to create an environment where all team members feel valued, engaged and supported to reach their full potential. This program consists of a series of four monthly trainings and the development of an integrated roadmap to incorporate key elements into Highwire's ongoing policies, procedures and programs.  The roadmap is steered by the Highwire Inclusion Team which consists of team members across our offices at different levels within the agency.

While it's no secret that agency life is stressful, few firms have confronted the mental health issues that can be triggered by these environments. Highwire, however, has introduced an agency-wide balance pledge to promote mental health. The agency promotes mental health through dynamic teaming, work-from-home Fridays, a fitness benefit, and even its holiday agency gift - a Muse Meditation Headband. — AaS

For the third consecutive year, the Southern California public affairs shop Davies tops our boutique Best Agencies to Work For (the firm won in 2018, 2017 and 2015, was shortlisted in 2016). The firm’s 30+ employees are spread across offices Santa Barbara, Washington D.C., Los Angeles. What has kept Davies at the top of the running year-after-year is the commitment CEO John Davies has shown to professional development. There are numerous stories in which Davies identifies talent and builds a career trajectory around them. "If we can train someone to do a job, we don't hire for that job," Davies said. "And we don't have people doing repeatable tasks — when you have people doing entry level work, it's hard to find good people."

When it comes to tangible benefits, Davies covers 100% employee premiums for medical, dental and vision insurance — and partially funds employee Health Savings Accounts. The firm also has policy of Real Profit Sharing, which means staff can earn up to a 100% performance bonus (based on profitability, client satisfaction and individual contributions), on top of an already competitive salary. Company financials are also “open book” — this means that every quarter, financials are presented to and reviewed by all staff, including all expenses, all profits and all challenges and strengths. Autonomy is also highly-valued with employees setting their own hours — with performance being measured by results, not time in the office. The firm makes a concerted effort to recruit diverse management and equal pay is a priority for women and ethnic minorities. — AaS

#1 Zapwater (Independent)
For the first time, we broke up the boutique category into two groups to reflect the numerous agencies that participate in this competition that are under 30 employees. It's no surprise that Zapwater rose to the top of the new category, considering how successful Zapwater has been in this competition before, in our Agency of the Year ranking and within our SABRE Award competitions. The firm is exceptionally good at maintaining strong business performance, producing high-caliber work, and of course, cultivating an engaged culture.

Through its membership in the Travel Lifestyle Network, Zapwater offers staff exchanges with member agencies including week-long exchanges in Australia and Hong Kong. Zapwater has an “open door policy” with all staff, enabling them to receive advice or address any issues from any Zapwater leader in a trusted and welcome environment. All employees are given four weeks vacation/PTO per year. After five years employment, employees earn a fifth week. Other perks include summer hours that close the office at 1pm from mid-May through Labor Day, "bring your pet to work" policy and a 10-year service short sabbatical. — AaS
#2 Red Lorry, Yellow Lorry  (Independent)