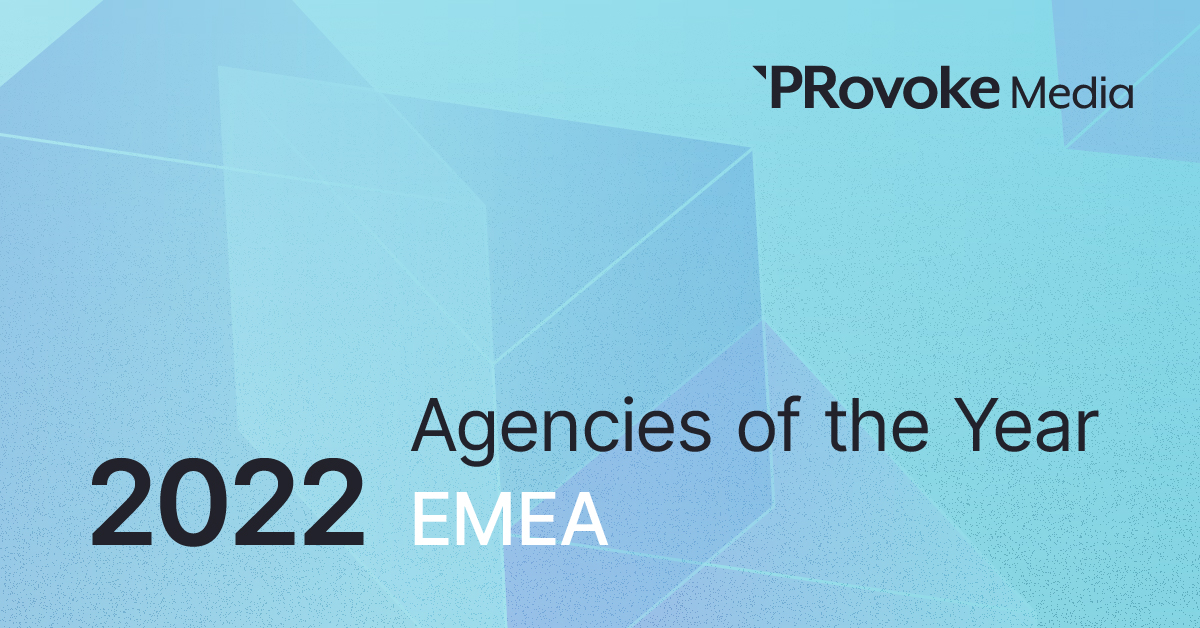 2022 Mediterranean Consultancies of the Year

The 2022 EMEA PR Consultancies of the Year are the result of an exhaustive research process involving more than 200 submissions and meetings with the best PR firms across the UK, Europe the Middle East and Africa. Analysis of each of the Winners and finalists across 20 geographic and specialist categories can be accessed via the navigation menu to the right or below. Winners were unveiled at the 2022 EMEA SABRE Awards, which returned to London on 27 May.

You can find the 2022 SABRE Awards EMEA winners here.

OPRG Italy describes itself as “the daughter of three mothers”, born in 2017 from the merging of FleishmanHillard, Ketchum and Porter Novelli’s domestic operations in Italy. The combined Omnicom agency has succeeded in creating its own distinct culture from the blend of three parent firms, and has become a top-three agency in a country that has hitherto resisted the dominance of the networks. Under the leadership of general manager and MD Massimo Moriconi, OPRG has become the leading MNC PR network in Italy, thanks to its strengths in purpose, reputation management and digital marketing, across a sector mix that includes pharma, F&B, FMCGs, energy and transportation. Meanwhile, the OPRG ownership gives it access to a product offering that includes Fleishman’s ARC crisis comms offering, Ketchum’s Storyworks suite, and Porter-Novelli’s purpose expertise.

OPRG Italy’s 140 staffers operate from the firm’s base in Milan.

2021 was a watershed year for OPRG Italy, with the firm growing 20% and headcount surging by almost 50% to 140. Healthcare was a strong driver, along with the firm’s F&B practice, and major new accounts from Amazon, Sandoz and Takeda. There was also new business from Aldi, Berlin Packaging, Discovery+, Pluto TV, Piaggio Group, Realme and Voiello, joining a client roster that features Barilla, Bmw, Deloitte, Essity, Gilead Sciences, Leroy Merlin, McDonald's, Novartis, Prada Group, and Vueling (IAG).

OPRG’s numbers are good, but it all begins with a strong focus on culture, from Moriconi and a leadership team that features HR director Marina Della Morte (one of the co-creates of the firm’s impressive internal comms campaign) as a key player. OPRG Italy’s ‘Cabinet’ works with four ‘competence centers’ to share knowledge across disciplines, while the firm has launched ‘Mosaic’ as a new methodology to support business in navigating DE&I values, policies and communications. The latter offering reflects OPRG’s own focus on DE&I, which remains a distinguishing feature for the agency in Italy, and includes support for local NGOs, including ‘Fondazione Sodalitas’. The firm has also established a ‘shadow board’ for younger talent to share views and recommendations.

The firm’s ‘Post-Invasion’ research focuses on current and future brand relationships, blending a traditional research approach with an analysis of ‘untold’ opinions via neuroscience studies. With Salesforce, meanwhile, OPRG helped scale up below-the-line dealer marketing for an automotive client, while the group also published the eighth edition of its study into the digitalization of Italy’s wine industry. Campaign highlights included Prada’s ‘Sea Beyond’ educational programme, Barilla’s ‘Grani D’Autore’ pasta campaign, and entertainment work for Novartis to build awareness of metastatic breast cancer.

INC (Istituto Nazionale per la Comunicazione) has maintained its independence for more than 40 years, and while it is not the largest PR firm in Italy it has been a pioneer throughout its history: it was one of the first Italian PR firms to add dedicated digital and content practices; it created a management board that includes not only former journalists but also designers, publishers and other creators; and it was an early adopter of a cross-functional communications approach. INC is particularly well regarded when it comes to the food & beverage sector, and social impact on behalf of non-profits, public and private organizations.

There are 45 people across offices in Milan and Rome.

In addition to its Athens headquarters, V+O Greece has offices in Romania, Cyprus, Albania, Serbia, Bulgaria and North Macedonia.

V+O Greece is a 183-person, €19 million operation, having capped 2021 up 25% from the previous year. The firm’s client roster grew to more than 210 in 2021; The agency also opened a North Macedonia office. V+O enjoys a high client retention rate, a testament to its work for Greek and multinational companies including Aegean Airlines, GSK, Coca-Cola, MasterCard, Mytilineos and Eldorado Gold. New business came from Amazon Web Services, Bayer Pharmaceuticals, the Onassis Foundation, SEV Hellenic Federation of Enterprises and Famar among others.

V+O operates in keeping with its belief that inclusion & diversity, employee development, corporate responsibility, integrated HR policies and optimized processes and procedures are essential factors in a business’s sustainability, fairness and long-term growth. Two out of three managerial positions are held by women (who also make up 60% of employees), though V+O’s D&I efforts focus on the range of diverse communities. The firm’s strategic plan calls for equal employment opportunities, integration in the workplace and professional development for all. CEO Teti Kanellopoulou, who has led the firm for more than 20 years, is supported by V+O Communication general manager Christina Fatourou and Tonia Gogou, general manager of V+O Communication Greece.

Major shifts in Greek consumer behaviors prompted V+O to research and assess industries — finance, ecommerce, pharma, tech and energy among them — as a means of being duly equipped to advise clients amid changing habits and expectations. V+O is a regular industry award winner (including 14 international awards from the likes of IPRA over the last decade); Most recently, the Direction Business Network named V+O a Protagonist of the Greek Economy, a nod to its growth during challenging times. The firm also one an IPRA award for its work supporting the infrastructure improvement and illumination of the Acropolis. Other initiatives included handling communications around Coca-Cola’s effort to support small businesses during the pandemic and MasterCard’s women’s empowerment live event.