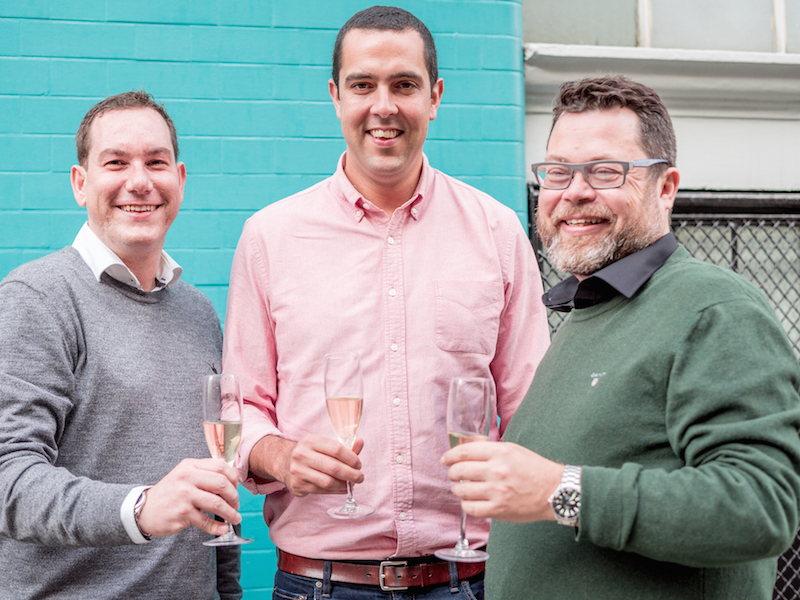 The fast-growing global communications group has doubled its UK presence by acquiring the consumer technology agency.

Dynamo’s team, concentrated in London but with staff in San Francisco, will be absorbed into Clarity’s offices. As a result, Clarity’s London team will double in size to a headcount of 25.

Clarity CEO and founder Sami McCabe (pictured, centre) said the acquisition gave the agency “meaningful scale” in the UK, and was the first in a series of planned acquisitions to increase Clarity’s services, vertical markets and geographic coverage.

He told the Holmes Report: “They are fantastic guys and it’s a great fit, we’re delighted. When you bring two agencies together in the same geography you need to make sure the cultural fit is right; it really couldn’t be better with those guys. We’re both focused on looking after our people, and there are so many synergies in the kind of work we do and clients we work with that once we started talking, we all realised what a great opportunity it was and we made it happen.”

McCabe said Gilley had done a “phenomenal job” in London since she joined Clarity a year ago from Bite: “She’s the right person to lead the combined agency in the UK. I strongly believed that people are good at what they enjoy doing and we have optimised that with the new roles for Peter and Paul, not just in the UK but globally.”

Gilley said: “The chance to bring together two complementary sets of skills and experience under one roof, will enable us to meet the changing needs of our clients who through increased investment are seeing the need to adapt to a more digitally savvy marketing landscape.”

Dynamo, which specialises in disruptive challenger brands, has a client roster that includes Improbable, Nextdoor and SurveyMonkey. They will join Clarity’s roster of high-growth brands that include Neos, ChargePoint and Hired.

The acquisition gives Clarity’s clients access to Dynamo’s digital and social media capabilities and its crowdfunding experience of securing $60 million in funding for companies including 3Doodler, Segway Ninebot and Pimax.

Bowles (pictured, left) said the two agencies were “very in sync” and it made sense to work together as the founding duo had “wanted to take Dynamo to the next level, quickly expanding our work globally and offering more countries our expertise.”

He has previously worked with Clarity’s global COO Alex MacLaverty at Hotwire, where he was creative manager between 2005 and 2008, and where MacLaverty was COO and EMEA/ANZ president until she joined Clarity this spring.

Cockerton (pictured, right) told the Holmes Report: “We thought, this is like the ‘Avengers Assemble’ of tech PR. We fell in love with Sami’s ambition and how we wanted to grow, but we took it slowly. Everyone has been incredibly positive – one client even said they had found it difficult to choose between us and Clarity when they hired us – and we have already seen clients increase budgets.”

Of his and Bowles’ new roles, Cockerton said: “It feels like a completely new job. Something I’ve always wanted to do is look at what we can develop that makes it easier for us to deliver, and being chief creative officer is all Peter’s ever wanted to do. The teams at both agencies are really lovely, genuine people who are really hardworking, and from the first chat we had we knew this was the place we wanted to go to.”