Please refer to our Privacy Policy for important information on the use of cookies. By continuing to use this website, you agree to this.
Home Latest Exclusive: Hong Kong Government Again Seeks PR Firm To Rebuild International Image

HONG KONG — Hong Kong is again seeking global PR support to help rebuild its international reputation, PRovoke Media can reveal — months after a fruitless search to find a PR firm that would help address "negative perceptions" of a city that has been gripped by unrest for 10 months.

The one-year assignment calls for PR agency support to help restore Hong Kong's prized reputation as a global business and tourism hub, which has been battered by months of sustained political and economic unrest. The Covid-19 pandemic, meanwhile, has only intensified the disruption, with retail sales plunging as the economy remains mired in recession.

According to the brief (excerpted below), "months of social unrest in Hong Kong in 2019 followed by a global health crises [sic] of enormous scale in 2020 have had a severe impact on Hong Kong’s economy as well as perceptions about Hong Kong as a secure place to live, work, invest and visit."

"Throughout the social unrest in 2019 there were views that the HKSAR Government did not effectively present its case to defend its actions or effectively mobilise the community to support law enforcement actions and condemn intimidation, doxxing, vandalism and the criminal and violent behaviour of rioters," continues the brief. "This had a negative impact on global perceptions about Hong Kong."

The comments in the tender document come after 15 pro-democracy figureheads were recently arrested, amid a broader crackdown on the city's protest movement. As Covid-19 cases in Hong Kong dwindle, protests in the city are again expected to gain steam ahead of this year's Legislative Council elections.

The brief notes that "local sentiment about Government action in general remains negative, social unrest may return and ongoing geopolitical tensions may continue to impact international opinion and sentiment about Hong Kong."

Despite these observations, according to agency sources familiar with the situation, the ISD is aiming to frame the brief as a purely economic effort, distancing it from chief executive Carrie Lam's office and underlining that political consultancy is not required. That may help assuage some of the reservations expressed by PR firms last year, when all eight invitees rebuffed a proposal to provide strategic communications support.

While one agency head described the brief as "much more sensible" than last year's effort, another noted that any PR campaign "cannot be separated from politics", potentially prompting concerns among local agency staff, given the sustained criticism that Lam's government and police force have attracted for their hardline response to protestors.

In addition to issues and crisis management research, the new PR campaign aims to roll out by early July, addressing international critics and including marketing and advertising across North America, Europe and Asia-Pacific. Target audiences include key influencers, investors, industry leaders, media and think tanks.

The agency search comes after the government significantly increased global PR spend in its 2020 budget, earmarking HK$226.6m (US$29m) for the ISD — an increase of 53.5% over its 2019 budget for international PR campaigns. However, the city's PR leaders previously questioned the budget hike, wondering whether more global campaigns would only serve to paper over the cracks caused the government’s inability to tackle Hong Kong's deep-rooted problems.

Earlier in the year, at the World Economic Forum, Hong Kong chief executive Carrie Lam blamed the city's "obsolete PR machinery" for the massive unrest that has gripped the territory since she attempted to pass a controversial extradition treaty. Lam also claimed that "world-class propaganda" is responsible for her inability to win over Hong Kong residents and push her approval rating out of the single-digits.

An ISD spokesperson noted that the new brief is an open tender, unlike last year's effort which invited a select group. "The social unrest in Hong Kong since June 2019 has attracted widespread international attention and affected the external image of Hong Kong SAR, while the epidemic in recent months has caused a significant impact on Hong Kong’s economy," said the spokesperson. "It is necessary for ISD to strengthen its publicity and promotion efforts."

PRovoke Media also reported that a US PR firm has been sought to help "inspire and enhance confidence" in Hong Kong's standing as a global business hub. 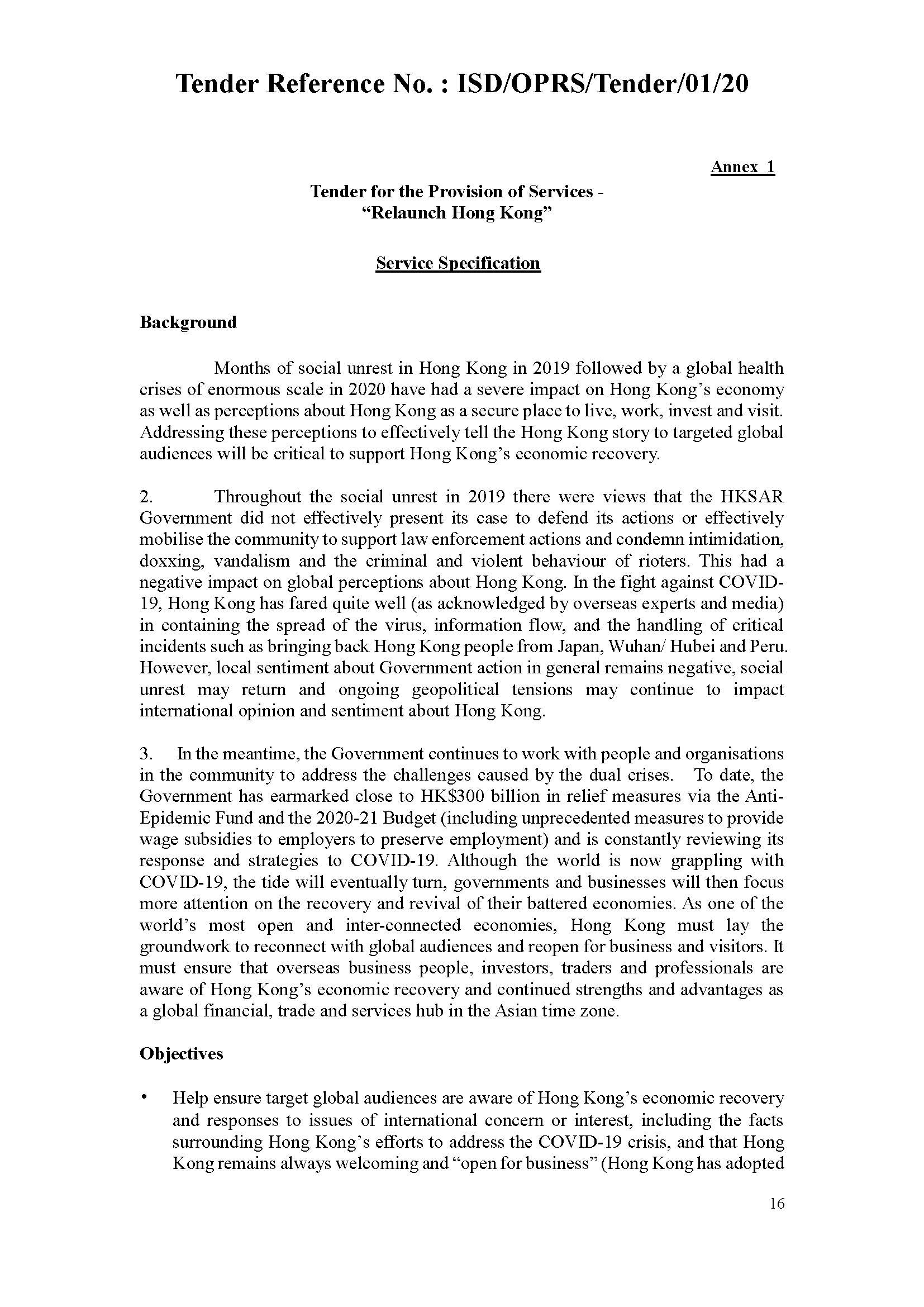 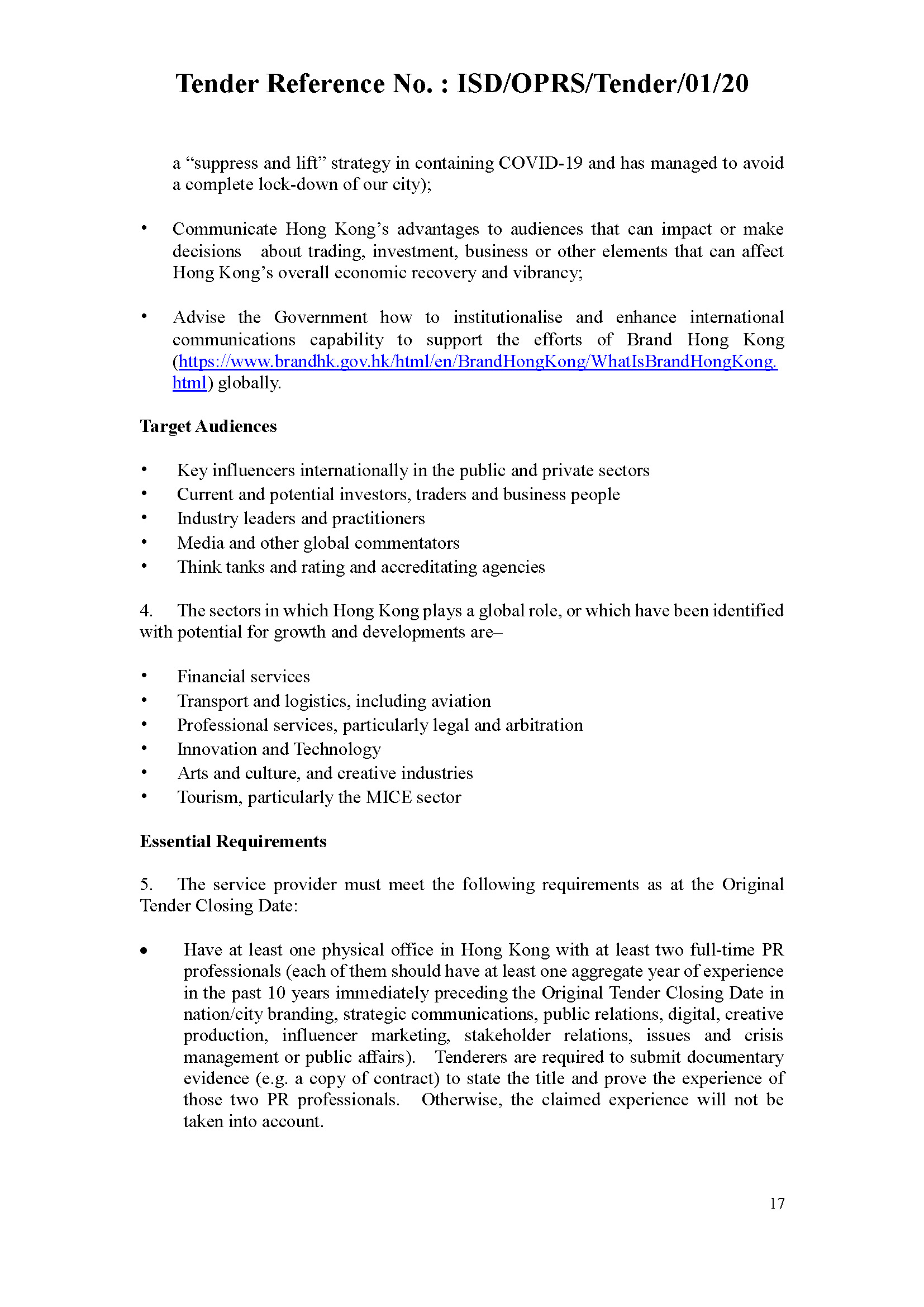