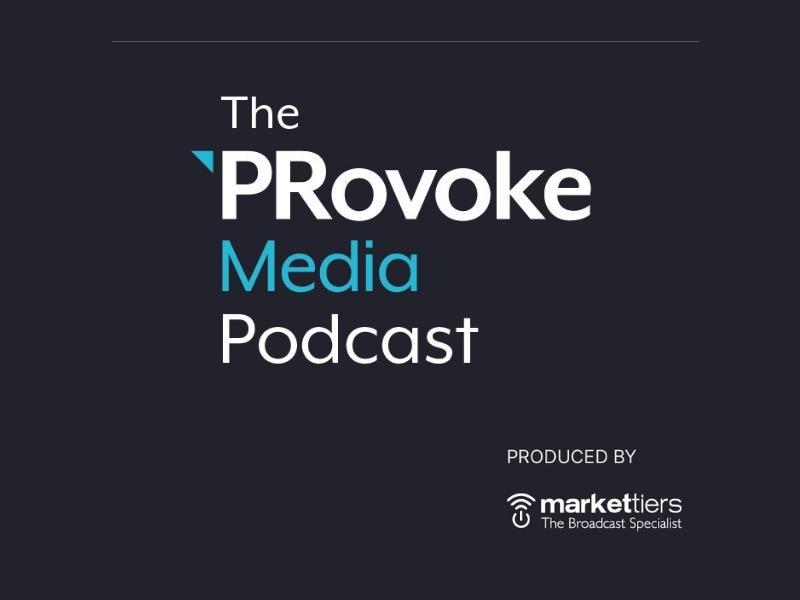 The PRovoke Media Podcast’s most popular conversations of the year, including Russia’s invasion of Ukraine, diversity, cancel culture and globalisation.

This year we’ve published 54 PRovoke Media Podcasts, including content with our partners, with agency and corporate guests from around the world joining us to talk about big topics from Russia’s invasion of Ukraine and globalisation, to diversity, cancel culture and the role of communications in corporate transformation. Here are the 10 episodes that were most listened to this year.

Remember, you can subscribe to the show via iTunes, Spotify or the direct feed. And a big thank you, as ever, to the team at Markettiers, which produces the show, and our sponsor during this year, social listening and media monitoring specialist Notified.

1. The PR fallout from Russia's invasion of Ukraine
With the world watching the events in Eastern Europe in horror and disbelief, our most listened to podcast of the year dates from March, just three weeks after Russia’s invasion of Ukraine. We followed up an intense few weeks of in-depth coverage – reporting on a warzone being relatively rare ground for a trade publication – by discussing the multiple public relations and reputation issues raised by the invasion. In conversation with Arun Sudhaman, Paul Holmes and Maja Pawinska Sims explored the complex fallout for brands, agencies and the wider PR industry, along with the implications of Russia's long-running disinformation and misinformation campaign, and the human toll on professionals working in Ukraine’s communications sector.

2. Elizabeth Bananuka on five years of BME PR Pros
Diversity, equity and inclusion in PR was again one of the hottest topics of the year. Pulling no punches, the outspoken and committed Elizabeth Bananuka was one of the earliest figures to not only speak up on the need for the industry to improve its woeful record on racial diversity, but to take action, as founder of BME PR Pros, a platform she launched five years ago to promote Black and minority ethnic inclusion in UK PR. In this conversation with Arun Sudhaman in January – our second most-listened-to podcast of the year – Bananuka discusses the organisation's journey, including The Blueprint diversity mark for agencies, and The Xec, the first leadership programme for UK-based BME PR and communications professionals. She also broke down the challenges and criticism she has faced, and the positives she has taken from the experience.

3. Engaging your stakeholders on today's social issues
There’s never been more pressure and expectation on companies from employees, customers, investors, their communities and the media to take a public stand on high-profile social and political movements, from Black Lives Matter to abortion laws and LGBTQ+ rights. In third place in our podcast rankings this year was this thoughtful conversation between Paul Holmes and Andrea Hagelgans, managing director of social engagement issues for Edelman, on how companies can – and in some instances, must – engage with what’s going on in society. The discussion ranges across how corporate leaders can decide why, when, where and how to speak up on social issues, and when to stay quiet, while taking reputation, risk, values, stakeholder expectations and business strategy into consideration.

4. Break the bias for International Women's Day
In a year that saw Afghan girls banned from school and Roe vs Wade, it can seem like women’s rights and equity are slipping backwards rather than progressing. Women around the world also still face significant barriers and bias in the workplace. For International Women's Day in March, four members of networking organisation Global Women in PR joined Maja Pawinska Sims on the podcast to discuss this year’s theme, #BreakTheBias, through the lens of tackling various forms of bias when recruiting women into the communications industry and supporting senior female talent. The discussion featured Global Women in PR co-founder and joint president Susan Hardwick; Alice Weightman, founder and CEO of Hanson Search and online talent marketplace The Work Crowd; Valerie Boas, a freelance writer, speaker and facilitator based in Paris; and journalist Laura Whitcomb, global campaign manager for the 30% Club, an initiative to increase gender diversity in businesses at board and senior management level.

5. What authenticity means in 2022
Whether you love or loathe the Cannes Lions Festival of Creativity, there’s no question it was good to see the industry back at the live event this summer for the first time in three years. In fifth place in our ranking was the most popular of our special series of podcasts from Cannes in June, produced for PRovoke Media by 4DC. Live from the Riviera, Arun Sudhaman had a provocative discussion with Weber Shandwick chief creative officer Tom Beckman and global executive creative director Angela Mears on their takeaways from this year's festival. Notable trends the duo highlighted included the need for brands to create culture rather than just participating, which requires them to take more risks and perhaps rethink what authenticity means in today's multi-platform era.

6. Redhill’s Jacob Puthenparambil on globalisation
The era of imperial agency expansion may have come to a necessary conclusion, but the prospect of a less global world is one that the PR industry should probably take more seriously. In sixth place in our most-listened to ranking this year is this podcast from January, in which Jacob Puthenparambil, founder and CEO of Redhill in Singapore, joined Arun Sudhaman to discuss the changing nature of globalisation in the PR industry. In their conversation, Puthenparambil explored how Asian companies can shift the conventional narrative in terms of multinational expansion, and why so few agencies from Asia have built global networks.

7. Don't get cancelled: how CEOs can minimise the risk of speaking up
With polarisation and outrage spiralling on social media this year, cancel culture has been hitting the headlines on practically a weekly basis. This edition from January, coming in seventh place, was the second discussion in our top 10 most-listened to podcasts about when companies should speak up on big issues. Here, Dan Neale, founder of London PR agency Alfred, talked to Maja Pawinska Sims about the agency's Brands and Movements research, which found that corporate leaders are committed to embracing new consumer expectations that business now needs to put purpose on an equal footing with profit, but many are still – understandably – nervous about the potential risks of speaking out on big societal and environmental issues through fear of being cancelled.

8. The PR industry's overtime problem
PR has long had an issue with over-servicing, and attaining some semblance of sustainable balance in the lives of its practitioners. In eighth place in our ranking is this podcast from February, in which two senior agency executives joined Arun Sudhaman to discuss the extent of the over-work problem in the industry. Jane Morgan, former managing director of Golin Hong Kong, and FleishmanHillard vice president Karolis Adomaitis, are both members of Hong Kong PR association PRHK, whose Next Generation Leaders Group carried out research into work-life balance in the industry, revealing the overtime experiences of those working in PR agencies in Hong Kong. And while some of these challenges have undoubtedly been exacerbated by the city's unique circumstances in recent years, they also have implications for agencies worldwide.

9. The future of corporate communications: business transformation
Every year, as part of our Influence 100 listing, we ask the world’s most influential in-house communicators how the roles of the chief marketing and communications officers are changing. In this episode, ninth in our listing of the year’s most-listened-to podcasts, Paul Holmes has a conversation with Edelman chief operating officer Jim O’Leary about the roles of CEO and CCO, and how they have evolved in recent years. They agreed that the role of a CEO is incomparable to that of past generations, moving from figureheads who handled business systems, financial elements and board relations, to increasingly being required to articulate the role their organisation is playing in society – the third time this topic appears in the top 10 podcasts this year. In turn, this has shifted the focus and role of CCO, with a much greater emphasis on advocacy, values, and internal and external sentiment.

10. PR & communications trends we'd like to see in 2022
Finally, our top 10 podcasts are rounded out with this episode from February, in which Maja Pawinska Sims and Diana Marszalek have a lively walk through the 12 trends the PR and communications industry wanted to see in 2022: a piece to kick off the year in which we combined curation with aspiration and a healthy dose of pragmatism, but with enough idealism to give the industry something to aim for. Ideas from our editors and industry leaders ranged from CEOs speaking up on human rights issues, to tackling disinformation, to putting a monetary value on trust, to a sustained focus on diversity and inclusion, to smarter use of technology, data, analytics and personalisation. All, as we look back at another year of upheaval, still very much works in progress.