Please refer to our Privacy Policy for important information on the use of cookies. By continuing to use this website, you agree to this.
Home Longreads Interview: Simon Sproule On Integration, His Tesla Exit, WPP And More 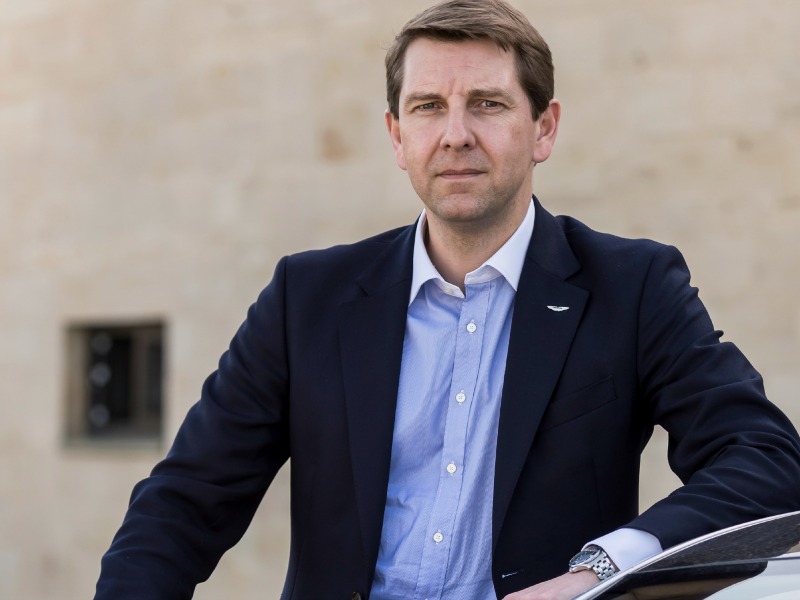 Aston Martin's marketing and communications chief tells us why integration is so hard, and explains his decision to leave Tesla after just 8 months.

It has been a year since Simon Sproule left Tesla to become head of marketing and communications at Aston Martin. The move came as a surprise; Sproule had spent only seven months at the electric carmaker, which he joined following a lengthy career at Nissan in Japan.

Sproule sits down with the Holmes Report after addressing last week's Festival of Marketing in London, where we learn — among other things — that Aston Martin can weave your family crest into your car interior. There is more useful information on offer in a wide-ranging conversation that covers Sproule's exit from Tesla, his new agency alignment with WPP, and the continued difficulties that companies face integrating marketing and communications.

Tell us a little about your job, particularly how you’ve integrated marketing and communications. You’ve been at Aston Martin for a year now?

I came onboard a month after Andy Palmer took over as CEO. Andy and I worked for many years together out in Japan at Nissan. What was interesting is that when we integrated marcomms at Nissan which we did in 2010/2011, Andy was the executive committee member with responsibility for marcomms and corporate planning. So, the two of us really developed the blueprint for integration at Nissan. It is a massive organisation and it was a much longer process to combine two functions. Aston is a much smaller company — and we had that benefit of hindsight. I think what’s important is that integration isn’t cookie-cutter.

I’ve had many people say, how do you integrate? Every case is different. At Aston Martin — smaller company, naturally, limited resources, fewer products etc — so we did it in a slightly different way. The head of marketing and head of PR reported to me from day one. There wasn’t a big consultative process. What we’ve been doing over the course of the past 12 months is making it work on the ground, how we go to market, launching cars, the business plan. There’s a restructuring going on in the business where we’re having to make quite a few positions redundant, so that’s tough. There’s an overall re-engineering of the business taking place and the integration of marcomms and building the brand is a key part of that.

You’re quite committed to integration, you’ve been a big advocate for it. Obviously it makes a lot of sense, but it appears to make more sense on paper than in reality. A lot of people talk about it but far fewer actually do it. I’m wondering what your view on that is — why still relatively few companies have actually integrated.

Because it’s hard. It’s not easy. I think human nature plays a huge role in this. Often, big corporations are quite siloed. It has to come from the top as well, the CEO has to believe in it. And some CEOs don’t, they are happy to have their PR group separate and they want them separate, they don’t want them integrated or distracted. But, on paper, when I talk to people — why wouldn’t you do it? Why would you keep the functions separate? The point I make, particularly to the PR community, is that integration does not mean the loss of specialisation. It’s simply putting a group of talented individuals with different skill-sets together and making sure they march to the same tune.

If you make the assumption that the leadership of the business believes in it, then the reason it fails is — who runs it? You’ve got to have someone in charge. You’re talking about the legacy of someone coming up through marketing and they think of themselves as marketers, or people that come up through the PR discipline and they think of themselves as corporate communications professionals. It is rare to find people that are both. Universities and colleges should teach integration — I want people on my team who are thinking about the message, and not just about advertising or PR.

Presumably that goes for the agencies you work with as well? They haven’t really integrated.

The smart thing about Sir Martin [Sorrell] and others is they were so far ahead of the clients. There’s was a very pragmatic response to shifting spend from clients. If clients were moving away from above the line or moving from events to PR, the agencies wanted to capture that revenue. At Aston we had lots of different agencies and we just weren’t big enough to sustain that network. Just the coordination of all those agencies was time-consuming, bureaucratic, wasteful and inefficient.

So what we’ve done over the last year is got Salesforce in to get our CRM sorted out, and brought WPP in. We have Team Aston Martin, led out of JWT and Prism, global in reach. We’ve been working with them for four or five months. I love it. I think it’s absolutely the way to go. I have one guy to call. Now, the argument is always that the big groups are more expensive. There’s still room for specialists, but I am convinced that the total value I get from my marketing and comms spend with WPP is far greater than if I were spending piecemeal with lots of little agencies.

Coming back to the corporate side of the equation, do you think there’s a sense on the communications side of the fence that they are just going to get subsumed by marketing?

I do. I hear that when I talk about this topic, particularly to communicators. I do think there’s a few. Here’s the irony: The way in which consumers are consuming information — the mindset of classical PR training is so much more attuned in terms of storytelling, understanding, influencing and being able to drive a narrative as opposed to spending a lot of money on advertising. My frustration with the PR community is that they can lead this.

It behooves communications professionals to learn marketing science. Andy [Palmer] as an engineer, is very data-driven. His challenge to me is always, prove it. What is driving marketing is pure data. PR is more nuanced, there’s lots of ROI studies you can do, but marketing is very data-driven now. You bring all these skill-sets together — that’s why integration is powerful. Why wouldn’t you want that? "I am convinced that the total value I get from my marketing and comms spend with WPP is far greater than if I were spending piecemeal with lots of little agencies" Do you think everything needs to be integrated. So, for example, public affairs and investor relations?

Every company has a different view. Typically IR sits with finance, government affairs is often standalone.

But these are all parts of the public.

Personally, I agree. I think of the classic stakeholder model. In our business: employees, customers, dealers, suppliers, investors, media, communities. I’m telling the same story to all of them.

What we’re actually seeing a little bit of is communications and human resources merging. We saw that with HSBC and then last week with AMD.

HR is quite a specialised craft, particularly with employment laws and so forth. I would personally find it fairly scary. The principle, though, is there. Your employees are probably the most important stakeholder group you have.

Let’s talk a little about your time at Tesla. How long where you there?

March through to October. Eight or nine months.

How was that and why were you only there for a relatively short time?

It’s a fantastic brand and an amazing experience. Moving from a very large company to one that was very small, albeit one that was getting an enormous share of voice. In a sense, I got back to my roots as a press officer. I was running an integrated group but Elon was very smart and very attuned to the power of media and storytelling. Because of the level of interest in the company, the phones were ringing all the time. It was a rare day when I was not quoted by some media organisation somewhere. For me personally, it was going back to my roots as a press officer. And being in Silicon Valley, being at a company that was a startup as opposed to companies that had very long histories. There was a very different vibe.

It was really exhilarating and an incredibly hard decision to leave. Elon was really gracious and understanding and I think he understood that the call of Aston as a Brit, after 17 years away, with Andy coming in — it was quite an emotional decision. Silicon Valley is a very fluid market, and people do come and go in organisations. I started it with the intent of it being a long journey, but a lot of life happens along the way. We’re actually doing an electric car — we would directly point to the effect and impact of Tesla as the key trigger.

You probably can’t think of two more different car brands. Tesla, one of the youngest and Aston Martin, one of the oldest. Anything you learned from a communications perspective from your time at Tesla that you are applying at Aston?

Actually in terms of the size of the companies — the marcomms team are similar-sized. Both brands have a massive interest from the media. Journalists love writing about Aston because it drives traffic. It’s what struck me — the number of speaking engagements I get asked to. It’s nothing to do me, it’s the fact that people are interested in the brand. I do one a month or more. And I take the opportunities because, in that room, there were 50 or 60 people and — law of averages — couple of people there probably could afford to buy an Aston Martin. One of the things that’s quite similar between Tesla and Aston is you really feel connected to the customer and you sell the car. I talk to customers all the time. I sell cars.