Please refer to our Privacy Policy for important information on the use of cookies. By continuing to use this website, you agree to this.
Home Research Arab Youth Less Optimistic About Prospects For Democracy 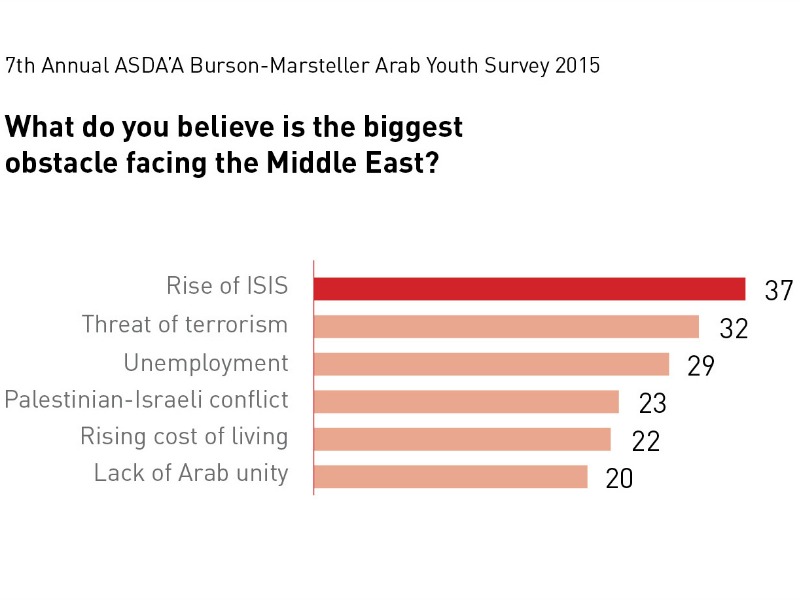 Confidence among Arab youth that the Arab Spring would bring positive change across the region is declining and many are now uncertain whether democracy could ever work in the Middle East.

Confidence among Arab youth that the Arab Spring would bring positive change across the region is declining and many are now uncertain whether democracy could ever work in the Middle East, according to the 7th Annual ASDA'A Burson-Marsteller Arab Youth Survey.

When asked whether they agree or disagree that "democracy will never work in the region," 39 percent of Arab youth agree, 36 percent think it could work while the remaining 25 percent are unsure. Conflicting views on democracy are further highlighted when youth are asked to name the biggest obstacles facing the region, with just 15 percent citing lack of democracy, down from 38 percent in 2014, 43 percent in 2013 and 41 percent in 2012.

As recently as 2011, "living in a democracy" was the most important desire for 92 percent of Arab youth polled.

Unemployment also remains a major concern, and many young Arabs are keen to start their own business. When asked to comment on how concerned they are about unemployment, the majority (81 percent) say they are "concerned." Not incidentally, early two in five (39 percent) young Arabs are looking to start a business within the next five years, with technology and retail being the most popular sectors.

When asked to suggest what national governments should do to further encourage entrepreneurship, one third (32 percent) say they should encourage affordable lending. Improving available training and education (26 percent) is the second most desired measure followed by reducing regulation and red tape (19 percent).

When asked to name a country anywhere in the world where they would like to live, Arab youth cite the UAE as their top choice for the fourth year running ahead of 20 other countries, including the United States, Germany and Canada. Likewise, when asked to think about which country they would most like their home country to emulate, almost a quarter (22 percent) consider the UAE as a model nation, followed by the United States (15 percent) and Germany (11 percent), Canada and France.