Please refer to our Privacy Policy for important information on the use of cookies. By continuing to use this website, you agree to this.
Home Research Race, Gender, Orientation Are Still Obstacles To Corporate Leadership 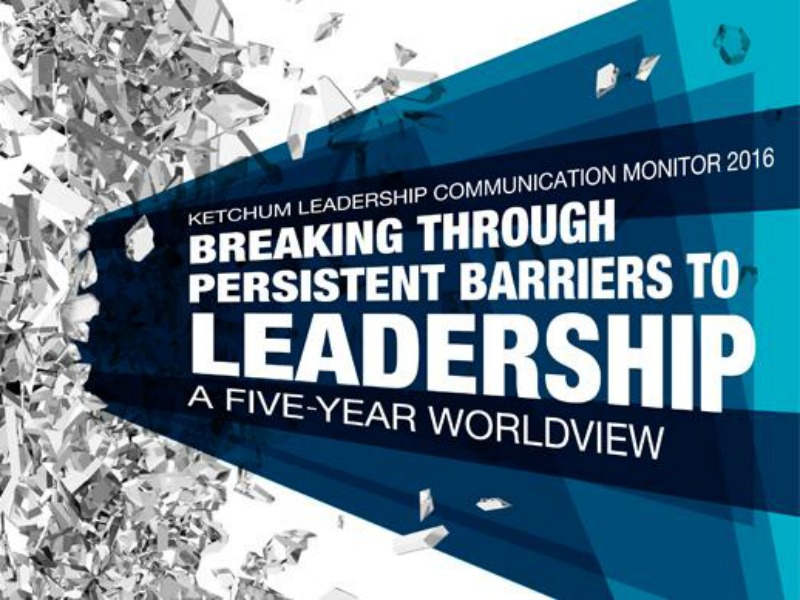 Barriers blocking equal access to leadership opportunities remain stubbornly in place when it comes to race, gender, disability and sexual orientation, according to the new 10-country Ketchum Leadership Communication Monitor.

Barriers blocking equal access to leadership opportunities remain stubbornly in place when it comes to race, gender, disability and sexual orientation, according to the new 10-country Ketchum Leadership Communication Monitor. Moreover, political leaders are seen by survey respondents to be part of the problem rather than the solution.

Now in its fifth year, the Ketchum Leadership Communication Monitor examines leadership and communication across leaders spanning business, political, community, non-profit and union/labor organizations. This year’s study shows that, when asked to consider five potential barriers to equal opportunities in achieving leadership positions, a majority of people worldwide believe those barriers persist in every area except religious beliefs—and close to half see that as a barrier.

According to Rod Cartwright, partner and director of Ketchum’s global corporate and public affairs practice, said, “Five years of global research have starkly highlighted the low-trust, high-expectation gap that exists for leaders, resulting in a significant negative impact on the bottom-line. This year’s results show unambiguously that business leaders have a huge opportunity to improve confidence levels by breaking through the multiple diversity barriers that still exist to equal leadership opportunity.”

Despite all the social progress of recent decades, not one country saw a majority believing in equality across all five areas, with respondents in Brazil, Japan and Spain feeling particularly strongly about the inequality of leadership opportunity in their country.

And when asked to choose the most effective means of shattering the leadership glass ceiling, “actions by companies and other employers” and “individual responsibility from every citizen for their own future” left “new laws and legislation” in the dust.

The 2016 =Monitor study also shines a stark new light on the extent of the global crisis of political leadership, while identifying key causes and provides a clear five-step roadmap to restoring confidence in politicians, based on lessons from business leaders. Nearly two-thirds (61 percent) of consumers globally believe their political leaders have fallen short of expectation in the past year, with a miniscule 7 percent saying those leaders take appropriate responsibility when they do fall short.

As a result, only one in five respondents (22 percent) said politicians lead effectively, with just 12 percent saying they anticipate an improvement over the coming year and more than half (51 percent) saying they expect performance to get even worse. And, over five years, political leaders have come last every year on how effectively they communicate, with an average 45-point gap between political and business leaders on meeting public expectations.

Says Rob Flaherty, Ketchum CEO and president, said, “It is remarkable to find that in the second decade of the 21st century, such stubborn obstacles to equality of leadership opportunity remain so firmly in place. And that at a time when world-class political leadership has never been more crucial, people look to companies and citizens themselves to combat these barriers, rather than to those they elect to drive social change.”

The research suggests a five-step roadmap for restoring confidence in political leaders:

Brands In Motion: Brands Need To Show They Are Delivering On Promises
Diana Marszalek
// 04 Oct 2022