Please refer to our Privacy Policy for important information on the use of cookies. By continuing to use this website, you agree to this.
Home Research Study: Young Americans Expect Brands To Join Their Push For Change 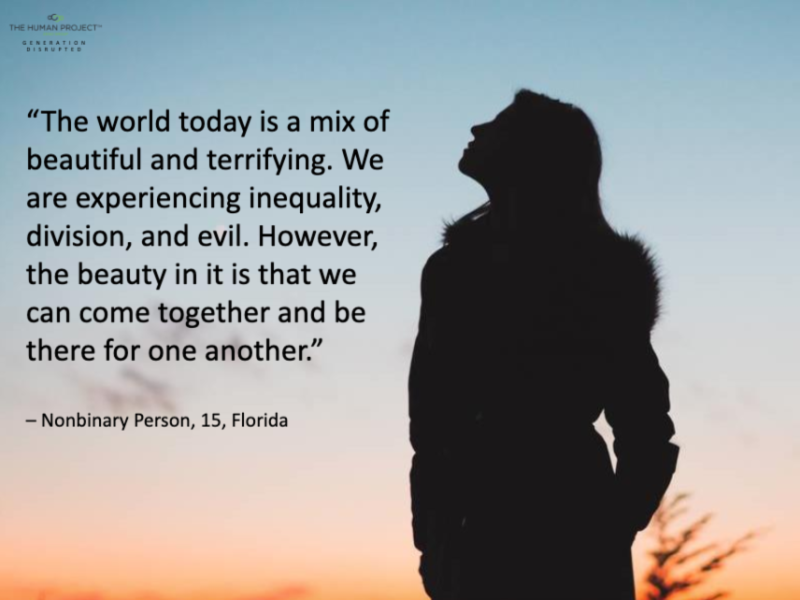 NEW YORK — 2020 has taken a serious toll on young Americans, who are emerging from the tumultuous year with death, losing loved ones and mental health among their top concerns, a new Zeno Group study finds.

Yet “Generation Disrupted” (Gen Z and young millennials) still has ambitious plans to usher in a more equitable, healthier future — and expects brands to join them in their drive for change, according to the research.

“They have a greater sense of purpose now than they did before,” said Therese Caruso, Zeno’s managing director of global strategy and planning. “They really haven’t seen change pushed forward so they are taking it on themselves.

“And they are pretty loud in what they expect,” she said, adding that should serve as “a wake-up call for companies” wanting to connect with the increasingly influential group. Brands and CEOs both showed up on respondents’ list of who should play a role in fostering change.

The survey of 1,093 participants ages 14-28 found that 2020 — with Covid, racial strife and the presidential election — has fundamentally changed young Americans, with 76% of respondents saying the year impacted their personal beliefs, values and character.

Among the study’s participants, 73% said they believe society and socioeconomic equality is on a wrong or uncertain track.

Nearly 58% said their day-to-day life is more stressful and uncertain than ever before. Many said the biggest driver of increased stress in their lives is the health and wellbeing of their family and loved ones, completing school/higher education, job stability and the current political and social climate.

75% feel the country is going in the wrong or uncertain direction.

Respondents were also united in wanting to bring about societal changes that would address the hardships and issues they care about. Their top issues in order of importance are: improved access to mental and emotional health services (80%); racism and inequality (78%); social justice (74%); community policy/police violence (74%); misinformation in the media (70%); and election security (69%).

But they don’t plan to go at it alone, as the survey found respondents believe the public and private sectors must play a critical role in developing and implementing solutions to these cultural and societal issues. When asked who they want more support and accountability from they said:  parents and family (37%);  friends (34%); federal government (32%); local government (30%); large companies and brands (21%); CEOs and presidents of companies (20%) and community and neighbors (19%).

All of which, Caruso said, points to the importance of brands and their leaders' activity pushing for societal changes in order to reach the extraordinarily impactful group of consumers — whether or not they are among their target audiences.

“They want to see themselves and their issues and worlds reflected at work, home and what they buy,” Caruso said, adding that age group impacts what their families and friends buy in addition to their own purchases. “They are so influential. Even if your product or brand doesn’t directly target them, they will have influence on how others are going to perceive you.”