Please refer to our Privacy Policy for important information on the use of cookies. By continuing to use this website, you agree to this.
Home Longreads 2020 Agency Rankings: Global PR Industry Up 6% Ahead Of This Year's Slowdown 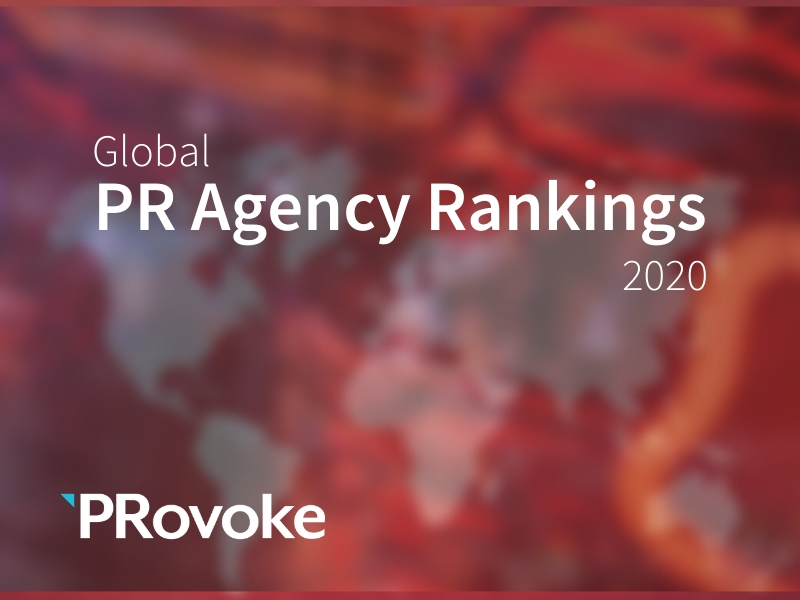 The global PR industry grew by 6% in 2019, based on PRovoke Media's definitive annual ranking of the world's top 250 PR firms, which is now live.

The Global Top 250, which provides the clearest picture available of global PR industry size and growth, is based on submissions from more than 400 PR firms across the world, along with revenue estimates for those firms that chose not to submit.

The research reveals that the Top 250 PR firms reported fee income of around $13bn in 2019, compared to $12.3bn for last year's Top 250 ranking. That growth was underpinned by double-digit expansion from midsize ($50m-250m) and small ($15m-50m) agencies, compensating for a stagnant performance from this year's Top 10. In addition, firms based in the UK and Germany also submitted strong performances.

Accounting for the numerous firms that reported outside of the Top 250, along with the vast number of smaller firms that do not provide revenue figures, PRovoke Media estimates the size of the global PR agency industry at $16.5bn, up from $15.5bn in 2019.

Meanwhile, the 'floor' for the Top 250 rises considerably, from $4.9m last year to $5.6m this year reflecting both industry growth and the popularity of this ranking as the only credible barometer of global PR agency size and performance.

“The public relations business continued to report healthy growth in 2019, better than 5% for the sixth consecutive year, with midsized and independent firms once again leading the way," said PRovoke Media chair Paul Holmes, who has been tracking industry growth for more than two decades. "In other words, most PR agencies went into 2020 in strong shape—which is a good thing, because it looks as though Covid-19 and the related economic crisis will make continuing the industry’s track record of growth impossible this year."

As ever, this figure remains somewhat misleading as it does not take into account the relatively high number of firms that chose not to report their revenue this year.

“Double digit growth in the UK and Germany—Europe’s two largest and most mature markets—was particularly notable," said Holmes. "Firms in those markets have been adopting a broader view of public relations—both its strategic role and its creative role—and appear to be reaping the benefits."

Once again, midsize PR firms — defined for these purposes as those within $50m to $250m — helped to power growth, underscoring this tier of agencies' ability to lead the market in terms of both growth and innovation. Midsize firms were up 12.3% in reported (USD) terms, or 9.6% on a constant currency basis.

"While it’s far from clear that the post-coronavirus PR business will continue along the same trend lines, the advantages that saw midsize and independent firms gaining market share will still hold true," said Holmes. "Independent firms have a nimbleness and a flexibility to adapt to changing circumstances—especially since they don’t have to follow holding company edicts about staffing and spending levels."

Reinforcing one of the decade's key trends, independent PR firms continued to outgrow their publicly-held peers in 2019, increasing their fee income by 8.3% on a reported basis to around $6bn, or +6.9% in constant currency terms.

All publicly-owned firms, meanwhile, reported fee income of $7.2bn, growing 4.4% on a constant currency basis, or +4.2% in reported USD terms, and accounting for around 45% of the overall market.

However, the divide between independent and public PR agencies is seen more clearly when analysing the performance of the Big 4 holding groups, whose PR operations grew by just 0.7% to $4.8bn. That level of expansion caps a disappointing decade for the big players, one in which low growth became the new normal for publicly-held PR networks.

“For most of the past decade, the large, global, publicly-traded PR firms have struggled with low single-digit growth even as the rest of the business averages in the double digits," said Holmes. "In 2014, the top 10 firms accounted for 48% of the top 250, compared to less than 42% last year. It’s clear that we are witnessing fragmentation—rather than consolidation—in the PR industry. If there are advantages to scale, they are not visible in this research."

“Revenue per head did not increase appreciably in 2019, which should be a red flag for agency leaders," said Holmes. "It looks as if public relations is falling back into the trap of over-servicing, of delivering more and more for less and less—an indication of competitive pressure and of the industry’s failure to conclusively demonstrate the very real value it delivers."