Please refer to our Privacy Policy for important information on the use of cookies. By continuing to use this website, you agree to this.
Home Longreads 2020: BCW And P&G Take Top Spots On Global Creative Index 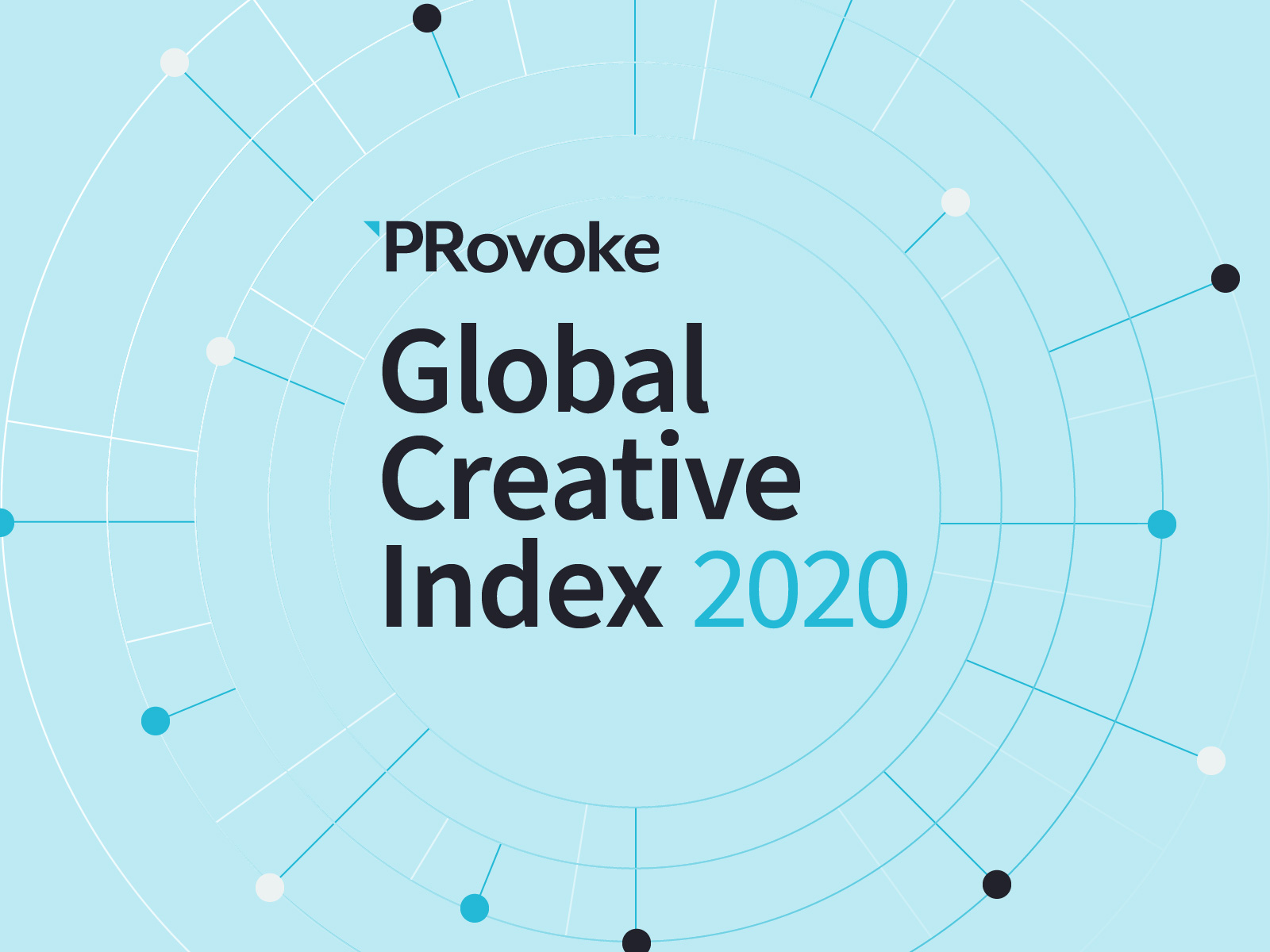 BCW has taken top spot in the 2020 edition of the Global Creative Index, marking the first time that the WPP PR firm has ranked first in PRovoke Media's annual benchmark of creativity in the public relations world.

The ninth edition of the Global Creative Index analyses entries and winners from more than 25 PR, digital and marketing awards programmes from around the world over a 12-month period, up to the 2020 Global SABRE Awards. The formula takes into account the expansion of 'public relations' work across multiple categories at advertising-oriented shows such as the Cannes Lions, although several of these competitions did not take place this year.

BCW's performance was powered by a range of work from across its global network, including award-winning campaigns for Boehringer Ingelheim, Coca-Cola, Huawei, Lenzing, the NBA and Tencel — with much of the work originating from its Asia-Pacific, EMEA and LatAm markets.

BCW moves up from second in 2019, ahead of Edelman and Ketchum, with just four points separating the top three this year. Edelman jumps from fourth, benefiting from campaigns for Causes for Animals Singapore, Coop, Gerber and Unilever, among others. Ketchum, meanwhile, stays third, supported by campaigns for Gillette, Mastercard and Wendy's.

Weber Shandwick, which ranked first in 2019 for the fourth time in five years, drops to fourth in 2020, ahead of Ogilvy and Dentsu — neither of which change positions. There is a major leap for Golin, up from 21st last year to seventh in 2020, while FleishmanHillard, H+K Strategies and ICF Next round out the top ten. 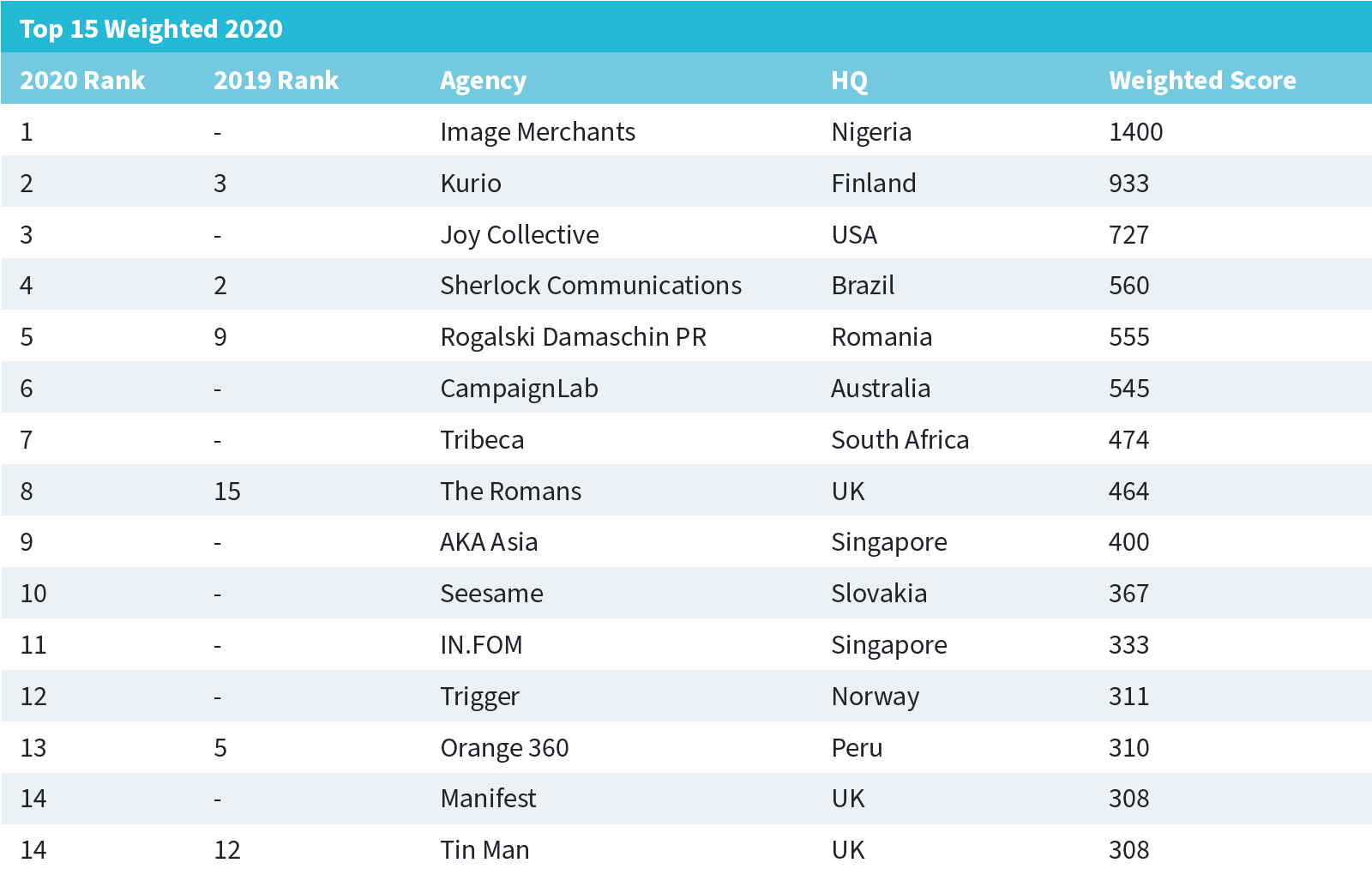 In 2020, this title is taken by Nigerian firm Image Merchants, thanks to campaigns for the Nigerian Air Force, Nigeria Comms Commission and Nigerian Customs Service. Finland's Kurio ranks second, moving up from third in 2019, with Brazil's Sherlock Communications dropping from second last year to fourth.

In third spot is US firm Joy Collective, thanks to its Crown Act campaign for Dove, while Romania's Rogalski Damaschin moves up from ninth to fifth.

The geographic diversity of the weighted table again stands out. In addition to Nigeria, Finland, Brazil and Romania in the top five, there are also firms from Australia (CampaignLab), South Africa (Tribeca), Slovakia (Seesame), Singapore (AKA Asia and IN.FOM), Norway (Trigger) and Peru (Orange 360). Three firms from the UK also make the top 15, led by The Romans, up to eighth from 15th last year.

'Broadway the Rainbow', the Broadway musical debuted by Skittles on Super Bowl Sunday, emerged as the most-awarded PR program of the past 12 months according to PRovoke Media's 2020 Global Creative Index. The campaign was awarded Best in Show at the 2020 IN2 SABRE Awards and ranked 27th among Global SABRE winners.

The Index analysed entries and winners from more than 25 PR award programmes from around the world, over a 12-month period, using the 2020 Global SABRE Awards as a cut-off point. Scores were weighted according to a PRovoke Media formula that placed particular emphasis on Best in Show winners, while also taking into account the expansion of 'public relations' work across multiple categories at advertising-oriented shows such as the Cannes Lions. 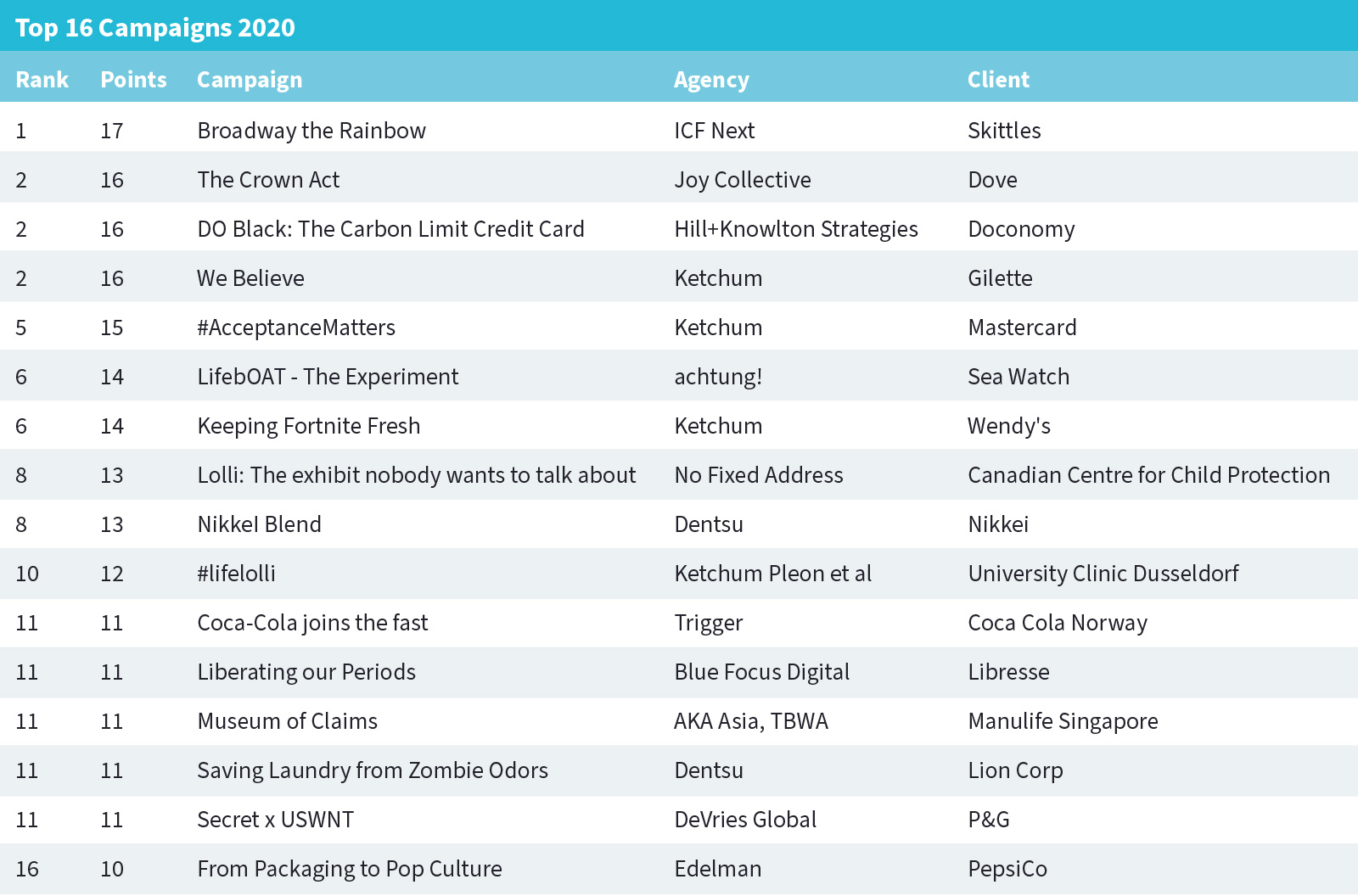 Three campaigns shared second spot. Dove's Crown Act with the Joy Collective, helped make it illegal for employers to discriminate on the basis of hairstyles, and won Best in Show at this year's Global SABRE Awards. Doconomy's DO Black worked with H+K Strategies to develop the world's first credit card with a carbon footprint limit. And, We Believe by Gillette with Ketchum bravely tackled the topic of toxic masculinity.

The results, which rank the top 16 PR campaigns as determined by award shows, reflect how brand 'purpose' has become a key ingredient in award-winning work, with many of the campaigns drawing on broader social issues, including a particular focus on such themes as race, gender, sexual orientation, refugees and child protection.

P&G retains top spot for the fourth consecutive year in the Global Creative Index's ranking of companies according to the performance of their campaigns in the various award shows that are tracked around the world. The FMCG giant scored more than twice as many points as second-placed Coca-Cola, which jumped from ninth spot in 2019. Unilever comes in third, ahead of Mars, Chipotle and Manulife. 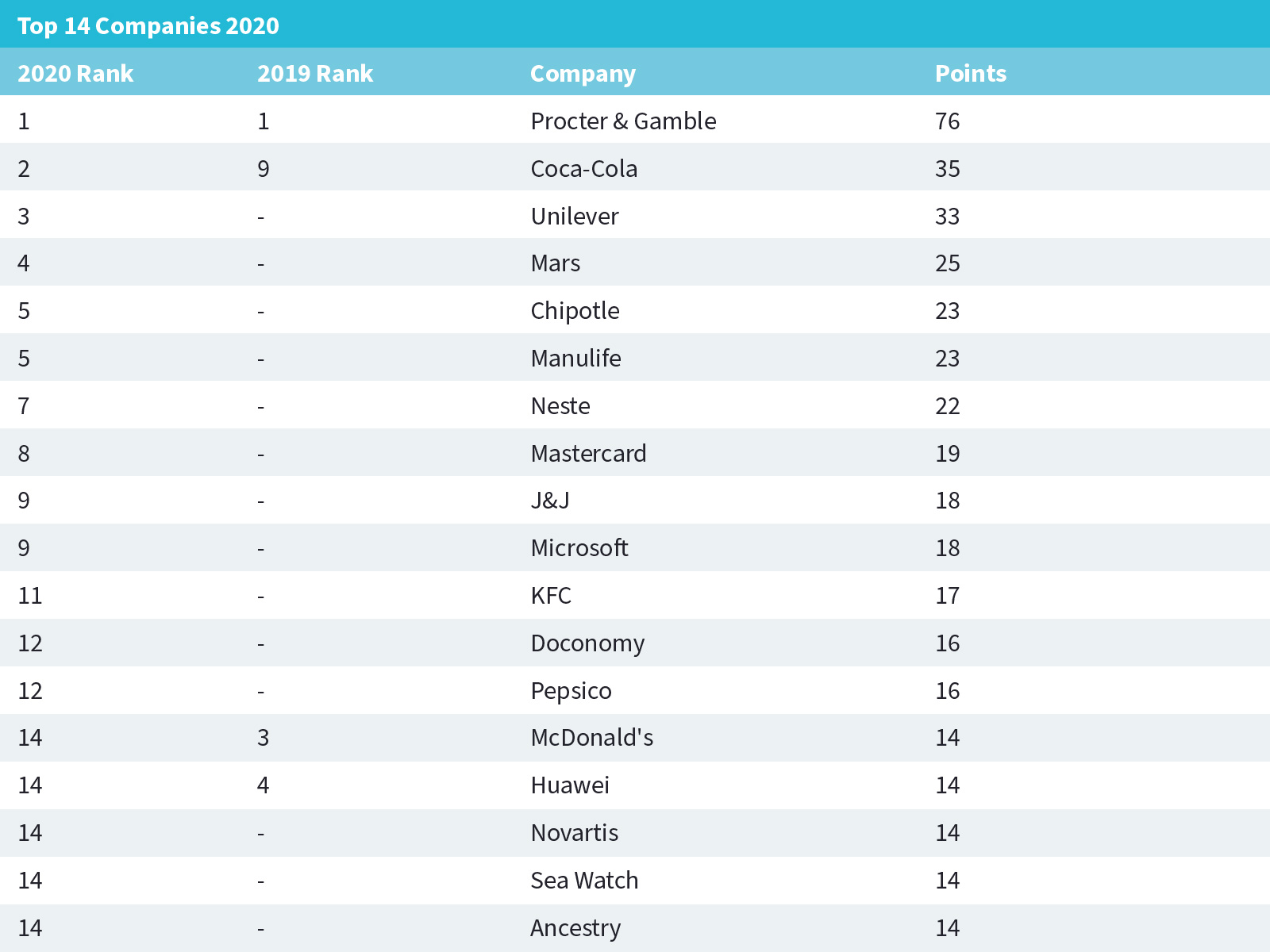 P&G's haul was led by award-winning efforts for such brands as Gillette, Pampers, Pantene, Secret and Vicks.

The Global Creative Index also ranks holding groups based on their agencies' creative performance. WPP retains top spot for the third consecutive year, thanks to the efforts of BCW, Ogilvy and H+K Strategies. Omnicom ranks second, leapfrogging Interpublic which drops to third. DJE and Dentsu round out the top five, with Publicis dropping out after its high-profile reduction in awards entries.

The Global Creative Index analyses entries and winners from more than 25 PR award programmes from around the world, over a 12 month period, using the 2020 Global SABRE Awards as a cut-off point. Scores were weighted according to a PRovoke Media formula that placed particular emphasis on Best in Show winners.