Please refer to our Privacy Policy for important information on the use of cookies. By continuing to use this website, you agree to this.
Home Research CommsIndex: A-P In-House Leaders Report Renewed Confidence, Budgets & Staffing 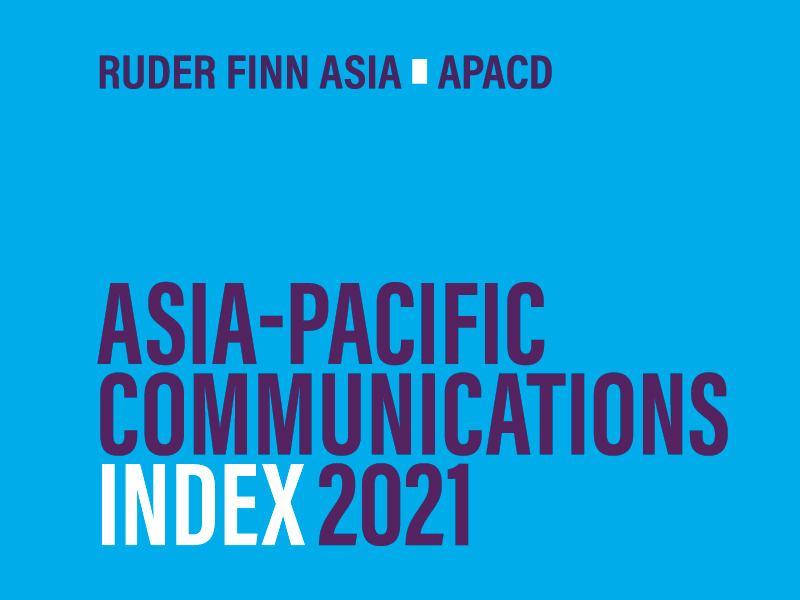 Landmark study of Asia-Pacific in-house communications professionals reveals that optimism, budgets and staff levels are increasing in 2021 after the challenges of the past 18 months.

The 2021 Asia-Pacific Communications Index is conducted by the Asia-Pacific Association of Communication Directors (APACD) in conjunction with Ruder Finn Asia, and polled more than 120 senior in-house communications executives (including APACD members) across the region during the second quarter of this year. 62% of respondents identified as 'senior management' or higher, with the majority based in Singapore or Hong Kong.

“The inaugural Asia-Pacific Communications Index tells a fascinating story of a communications profession that has never been more important to the fortunes of the organizations in which it operates," said APACD president Azmar Sukandar.

"Yet, while confidence, budgets and staffing levels rebound from the pandemic, there is cause for concern around specific areas such as resource allocation, measurement, and D&I — reinforcing not only the critical need for in-house communicators to keep demonstrating value on an ongoing basis, but to bring to bear all their unique skills in terms of leadership counsel, empathy and authentic engagement."

"We wanted to create a research study that had real value and relevance to the corporate communications community," added Charles Lankester, Ruder Finn Asia EVP of global risk and reputation. "The data mirrors what we are seeing from the consultancy side: client investment is growing and quite rightly so are expectations."

When it comes to the business priorities underpinning the positive sentiment, employee engagement emerges as one of the most frequently cited areas by respondents, along with 'management support', 'community relations' and 'brand building'.

That sense of optimism carries through to investment in staffing as well. 35% of respondents report increased staffing levels in 2021, with only 6% expecting a decrease.

In-house teams, unsurprisingly, rank top in terms of communication budget allocation, with consultancies in second place. Technology, though, only attracts marginally less spend than agency support, and comfortably ahead of freelance support.

Of greater concern, surely, are the methods by which the effectiveness of PR spend is measured. Media clippings come out on top, narrowly ahead of favourability/sentiment scores and awareness metrics — all three of which are proxies rather than actual evidence of behavioural change or business outcomes. Advocacy metrics trail further behind, albeit ahead of 'harder' evaluation options such as company financials and sales.

"One area of the research that is very disappointing is the reliance on prehistoric measurement metrics," said Lankester. "'Media clippings' are not how our industry should be measured — making a measurable business improvement or behavioural change should be our focus. Frankly, any client or agency should be thoroughly embarrassed if they are still selling clippings as an ROI or their reason for existence."

Almost half of our respondents (45%) attribute less than a quarter of their organization's total marcomms spend to PR and communications, compared to other areas such as advertising, media and marketing. A third peg the proportion at 25-49%, but for almost a quarter (23%), it's less than 10%.

While staffing levels are rising (as reported above), in-house communications teams remain relatively small in this region — 30% of communications functions employ one to four people, with half numbering fewer than nine executives. Of note, 14% are 50 people or more.

It is little wonder, then, that more than two-thirds of in-house comms executives (70%) believe their function to be understaffed.

When it comes to the primary responsibilities of the communications team, meanwhile, media relations comes out on top, selected by 92% of respondents, ahead of crisis/issues (89%), corporate reputation (81%), and social media/monitoring (70%). Further behind are employee engagement and digital strategy (61% each), public affairs (55%), and influencer management (42%).

"It’s fascinating to see where those on the client side spend their time and are most focused," said RFI Asia SVP David Ko. "Media relations, crisis/issues and reputation management are where the majority of in-house interest lies and this is unlikely to change as there is a direct line from these three areas to the C-suite. It’s also interesting how influencer management is relatively low on the in-house list: we believe this space will further change dramatically and its importance will reduce due to saturation, mistrust and general cynicism."

There is little doubt of the importance of diversity and inclusion to Asia-Pacific in-house communications teams; with the highest proportion (44%) describing such measures as 'extremely important' and more than two-thirds (69%) deeming it as above average. But there is more cause for concern when it comes to the effectiveness of D&I policies in this region.

Almost two-thirds of respondents (64%) describe their D&I policy as 'somewhat effective' or worse, while 14% admit they don't have one. Just over a third (36%) have an effective D&I policy in place.