Please refer to our Privacy Policy for important information on the use of cookies. By continuing to use this website, you agree to this.
Home Research 2018 Edelman Barometer: Trust Collapses As People Question Nature Of Truth 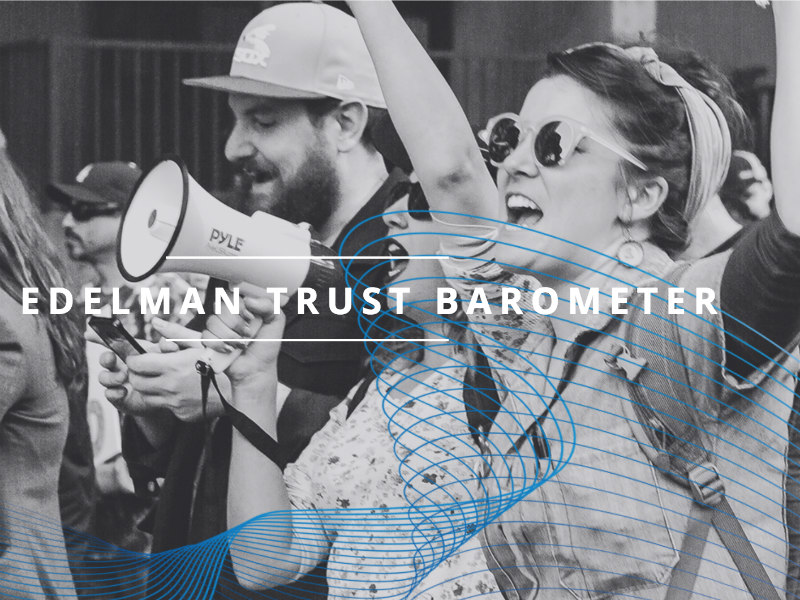 For the first time, the media is the least trusted institution globally, according to the 2018 Edelman Trust Barometer.

NEW YORK — For the first time, the media is the least trusted institution globally, according to the 2018 Edelman Trust Barometer.

In a year dominated by the fake news phenomenon, it’s perhaps unsurprising that trust in the media fell below 50% in 22 of the 28 countries surveyed. This was primarily driven by a significant drop in trust in platforms (search engines and social media), which now rank below mainstream media as a reliable source of information.

A remarkable 63% of the 33,000 respondents to Edelman’s 18th annual global survey said they no longer knew how to tell good journalism from rumour or falsehoods, and 59% said it was becoming harder to tell if a piece of news was produced by a respected media organisation. And almost 70% were worried about fake news and false information being used as a weapon; being a tool, for instance, to influence or disrupt national elections.

Ben Boyd, Edelman’s president of intellectual property, told the Holmes Report: “We’re at a point of global awareness of the notion of disinformation and questioning the nature of truth: respondents told us they do not know what to believe, impacting trust across the board.”

But there is a bright spot for media: a renewed faith in the profession of journalism, with 20 of 28 countries experiencing a double-digit increase in the credibility of journalists. The eight-point global gap between journalism (59%) and platforms (51%) as a trusted source for news and information is the largest disparity in seven years, and in some markets the difference is even higher.

Journalists are just one of the “voices of authority” where trust is up; trust in almost all credentialed experts rose compared to 2017. By contrast, the credibility of peers, or “a person like yourself”, dropped six points to 54%, reversing a seven-year upward trend.

Trust in the US suffered its largest drop in the survey’s 18-year history. Trust among the general population fell nine points, while trust among the informed public plunged 23 points to make the US the lowest of the 28 countries surveyed, below Russia and South Africa. This collapse of trust is driven by a staggering lack of faith in government, which fell 14 points to 33% among the general population, and 30 points to 33% among the informed public. Conversely, China leads the Trust Index this year.

The global trust crisis extends to brands: 42% of respondents said they didn’t know what brands to trust. Stephen Kehoe, Edelman’s new global chair of reputation, told the Holmes Report: “It is concerning but it’s also a point of opportunity for brands. In a world where we are searching for truth, there is a real thirst for those who can convey facts in the right way. Trust in business has gone up relative to governments and even NGOs. Businesses are expected to take a lead.”

CEO credibility, on the other hand, rose sharply by seven points to 44% after a number of high-profile business leaders were vocal about their positions on the issues of the day. Nearly two-thirds of respondents say they want CEOs to take the lead on policy change instead of waiting for government, which now ranks significantly below business in trust in 20 markets.

Kehoe’s advice to business leaders was to see this as an opportunity: “Respondents are telling us that job number one for CEOs now is to focus on building trust. Part of that is about speaking up. We’ve seen some of that over the past year; arguably we’d say CEOs need to do a lot more, helping to address people’s fears and concerns. One of the trust-building mandates for business is to be a guardian of information quality – this is permission for business to step up and essentially be a counter-balance to fake news.”

Notably, trust in NGOs is down three points globally among the informed public segment, which may be down to perceptions around a lack of transparency or action at the same time as businesses are stepping up.

In his summary of the report findings, Edelman CEO Richard Edelman said: “Silence is a tax on the truth. Trust is only going to be regained when the truth moves back to centre stage. Institutions must answer the public’s call for providing factually accurate, timely information and joining the public debate. Media cannot do it alone because of political and financial constraints. Every institution must contribute to the education of the populace.”