Please refer to our Privacy Policy for important information on the use of cookies. By continuing to use this website, you agree to this.
Home Research Compensation, Culture, Covid: What Drives Employee Engagement At Asia-Pacific PR Firms? 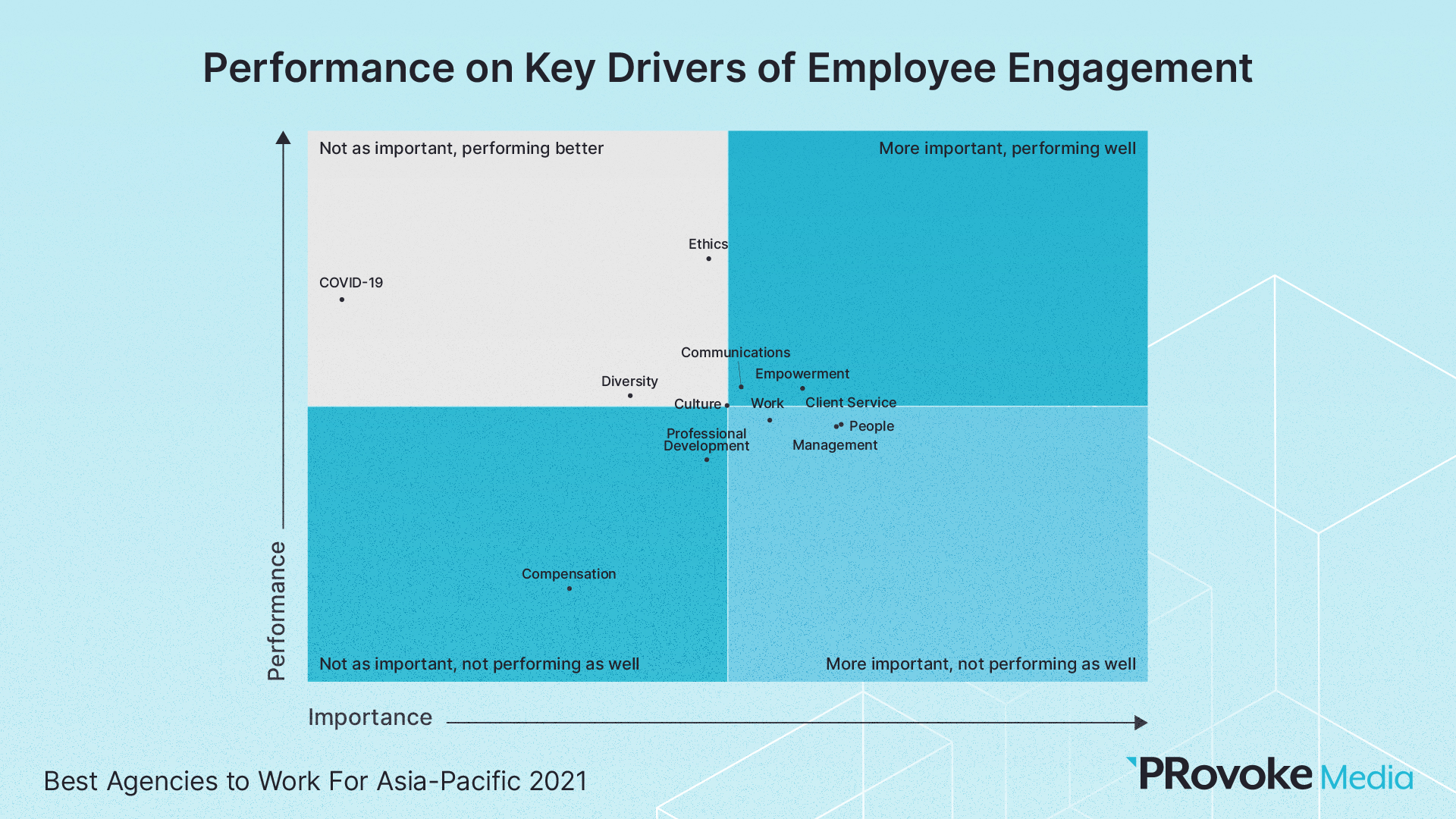 Asia-Pacific PR agency employees want to feel empowered, stimulated, and that their professional growth is being cultivated within the workplace, according to findings from PRovoke Media's Best Agencies to Work For study.

The findings, based on extensive responses from more than 1,100 employees at 24 PR agencies across the region, provide a comprehensive picture of industry compensation, culture and working practices. The second instalment of the analysis focuses on employee engagement drivers during a time in which traditional working practices are being transformed by the ongoing Covid-19 pandemic. 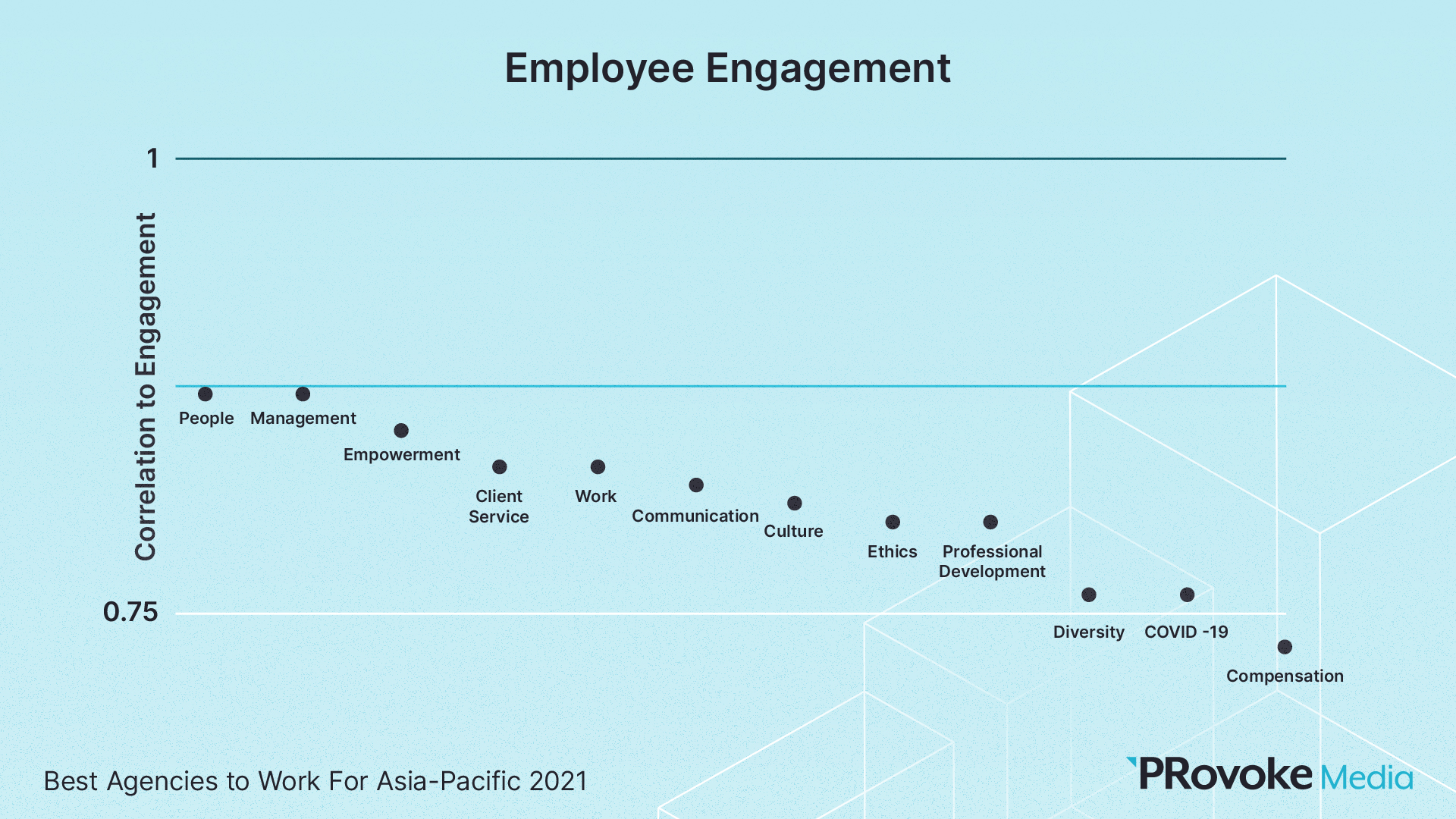 In a perfect world, an agency would perform well on the attributes of company culture that matter most to overall engagement, and less well on those that are less relevant. Accordingly, a derived importance analysis was run to determine the relative role of each of the 13 categories of attributes on overall engagement. This was compared to an average all of the promoter ratings for each attribute within each individual category. The result is a correlative (rather than causal) analysis that determines how specific attributes map against overall employee engagement.

Areas that are important to driving engagement but require additional attention from employers include people, management, client service, and work. In short, employees want to feel empowered, stimulated, and that their professional growth is being cultivated within the workplace.

Specifically, areas in which employers are performing worse (as per the bottom right box above) included: having a mentor at your agency, prioritizing existing clients over new business, having innovative digital solutions, retaining employees, and offering work that is intellectually stimulating.

Meanwhile, compensation and culture (bottom left) were identified as factors that are less important to driving employee engagement. Professional development also fell into this category but was identified as more important relative to compensation and culture. Given that the areas that have been identified as requiring attention are in the realm of work and mentorship, it makes sense that professional development would be more closely aligned with those items in terms of importance. 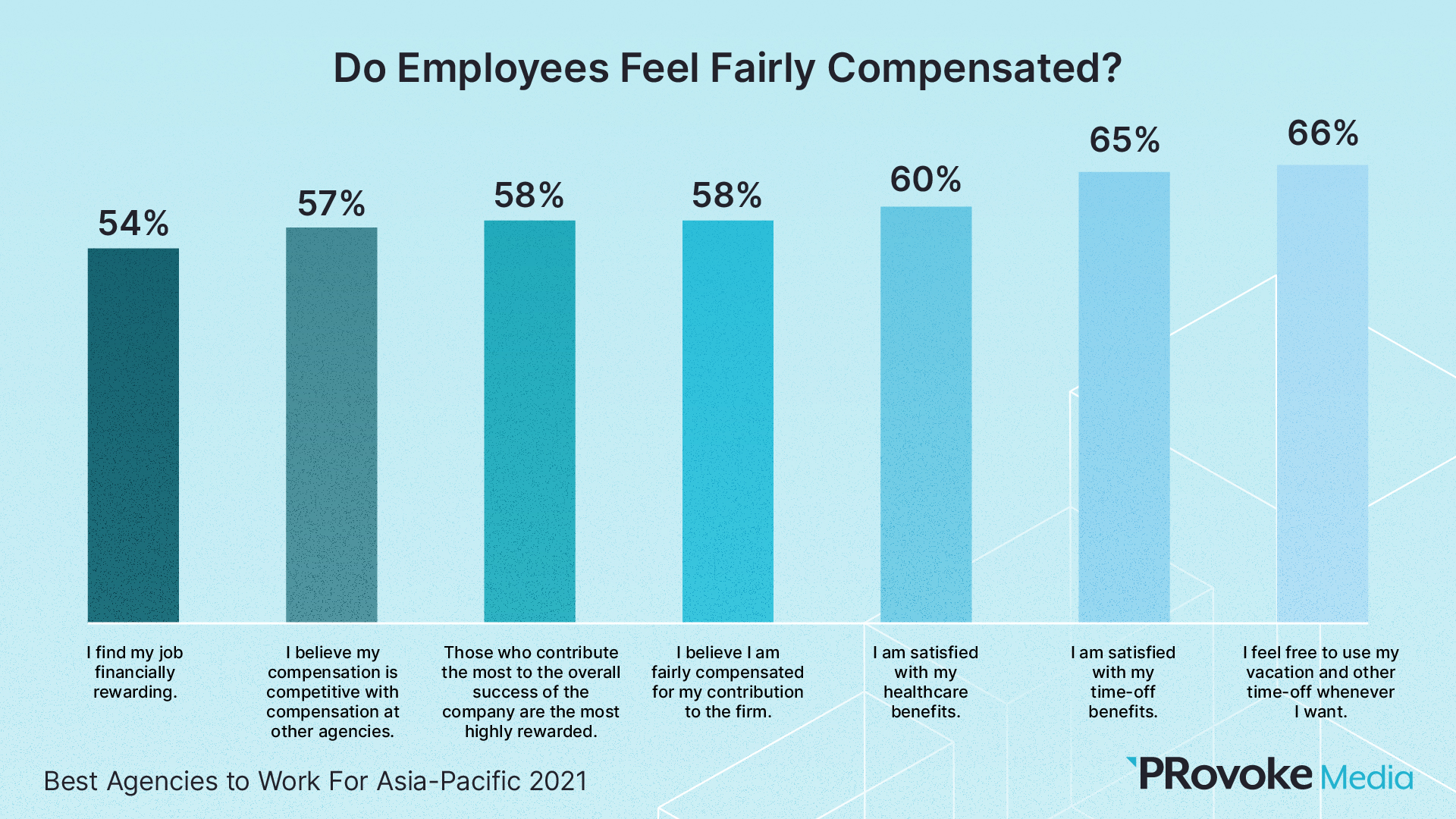 Two thirds of employees are satisfied with time-off, vacation, and healthcare benefits. However, only slightly more than half find their job financially rewarding and feel that their compensation is competitive with other agencies. Fewer than six in 10 believe that compensation policies at their firm are fair, whether that refers to their own contribution or to those who contribute most to overall success.

Accordingly, satisfaction with compensation is much lower than other factors, but it was not identified as a strong driver of what makes employees feel most engaged with their agency. 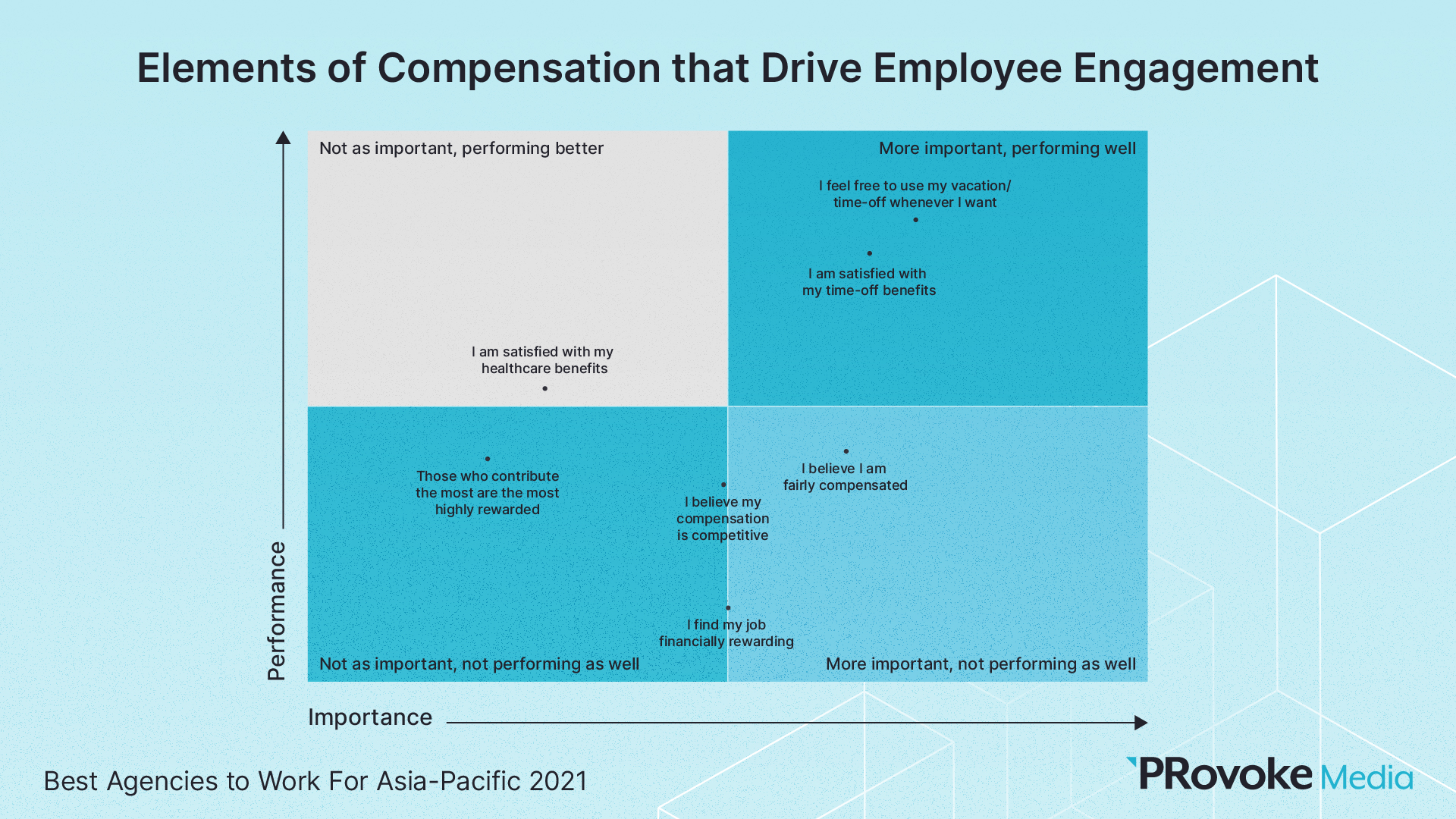 An analysis of each compensation attribute was undertaken to determine what aspects of compensation are stronger drivers of employee engagement relative to one another. The results indicate that most employees are satisfied with, perhaps even expectant of, a strong benefits package. However, improved feelings of fair compensation and that one’s work is financially rewarding would contribute most to higher engagement levels.

Culture, furthermore, emerges as a mid-level driver of engagement. That means it is more strongly related to employee pride and retention, compared to areas such as ethics and diversity, but is not as impactful as people, management, and empowerment. 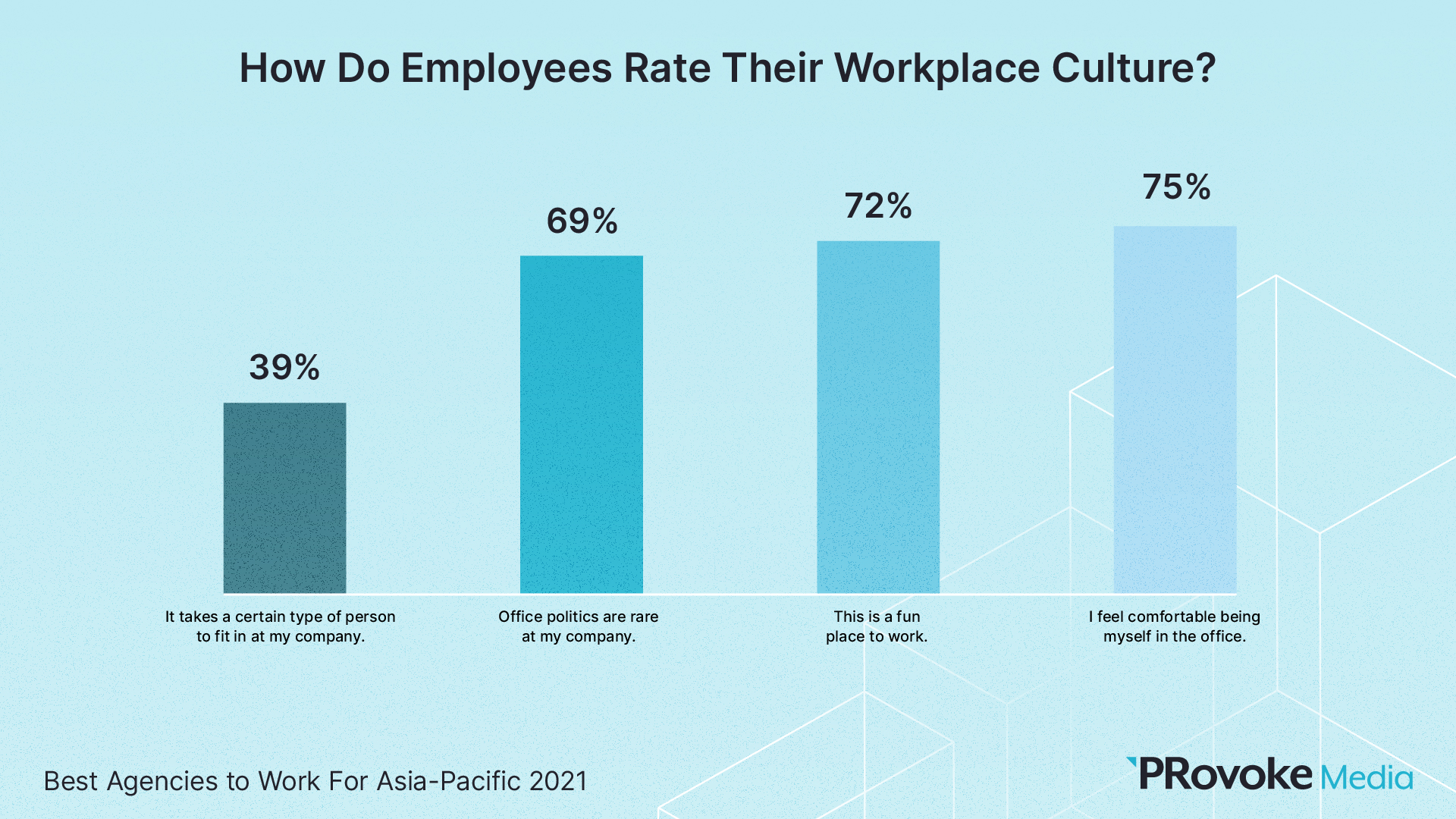 Employees generally rate their agency culture positively. Three in four employees say that they feel comfortable being themselves in the office and nearly as many feel that their agency is a fun place to work. Notably, nearly four in ten feel that it takes a certain kind of person to fit in at their company, while almost a third disagree that office politics is rare.

The way agencies responded to Covid (top left) fell into the category of actions that are more of an expectation than a differentiator. Considering that every agency was affected, and that their response was required, it is perhaps unsurprising that employees would expect this from their agency. This was also true in other regions including North America and EMEA. 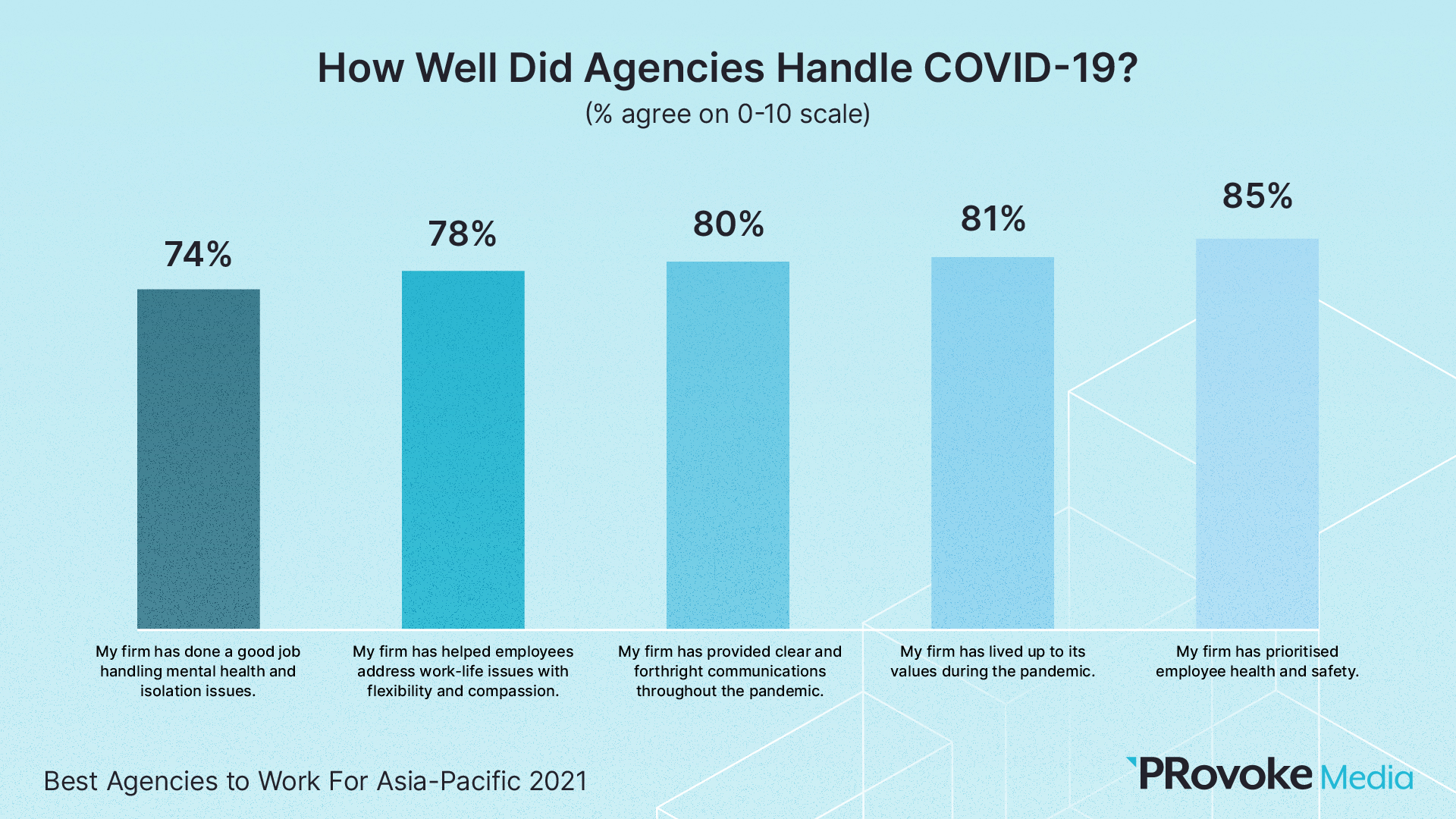