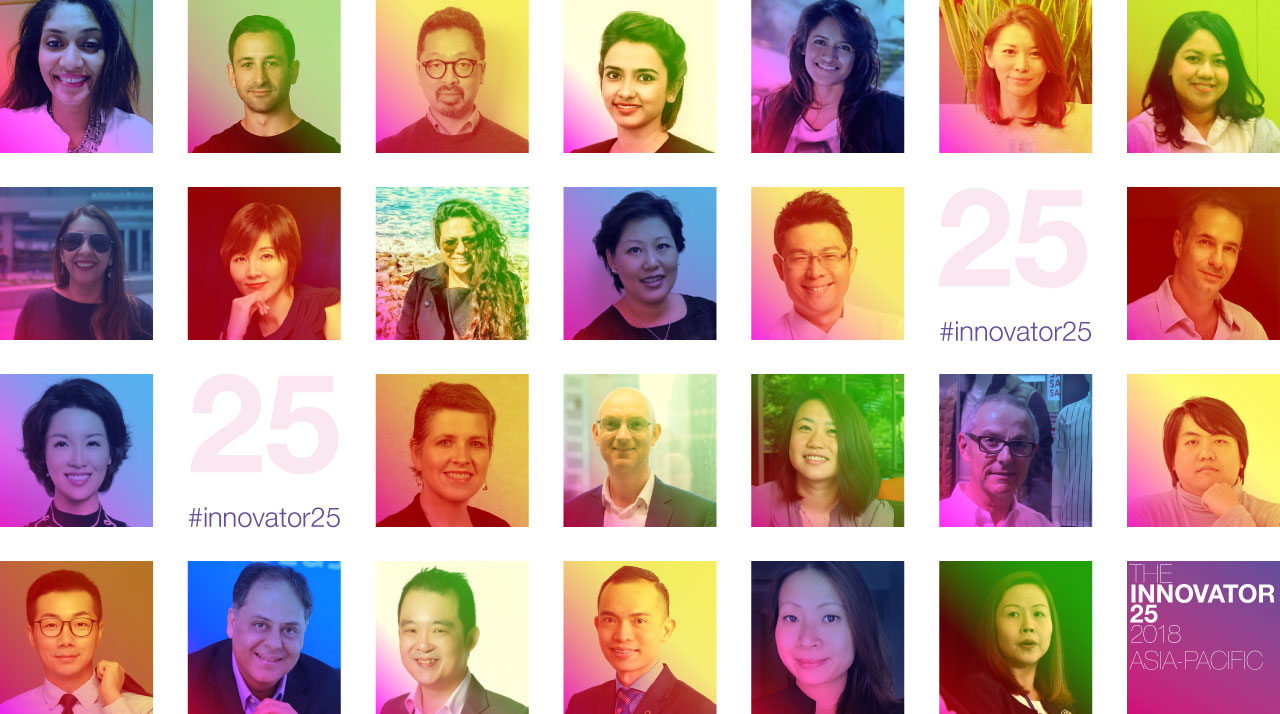 Our third Innovator 25 class in Asia-Pacific provides a valuable glimpse of our industry’s future, shining a spotlight on those individuals who are reshaping influence and engagement in an era of dramatic marketing and communications disruption.

The people recognised here come from various corners of the industry — creative strategy, digital execution, influencer mapping, media storytelling — but together they represent a compelling picture of what marketing and communications looks like today, and where it is heading tomorrow.

The highest proportion of our inaugural class are based in Singapore (36%), followed by China (Beijing, Guangzhou, Shanghai and Shenzhen) (24%). Other markets represented are Bangkok, Bengaluru, Hong Kong, Kuala Lumpur, Mumbai, Seoul, Sydney and Tokyo. 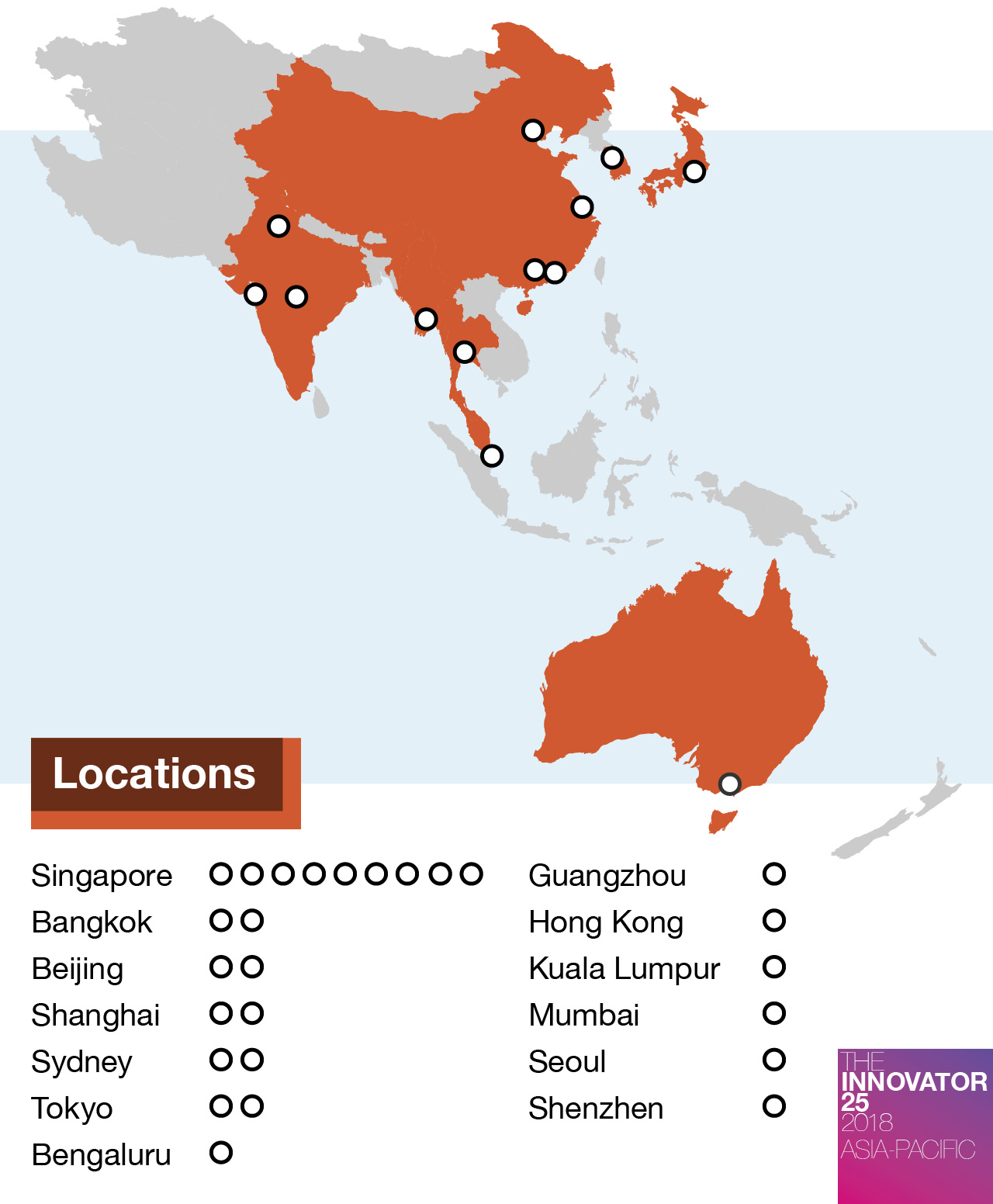 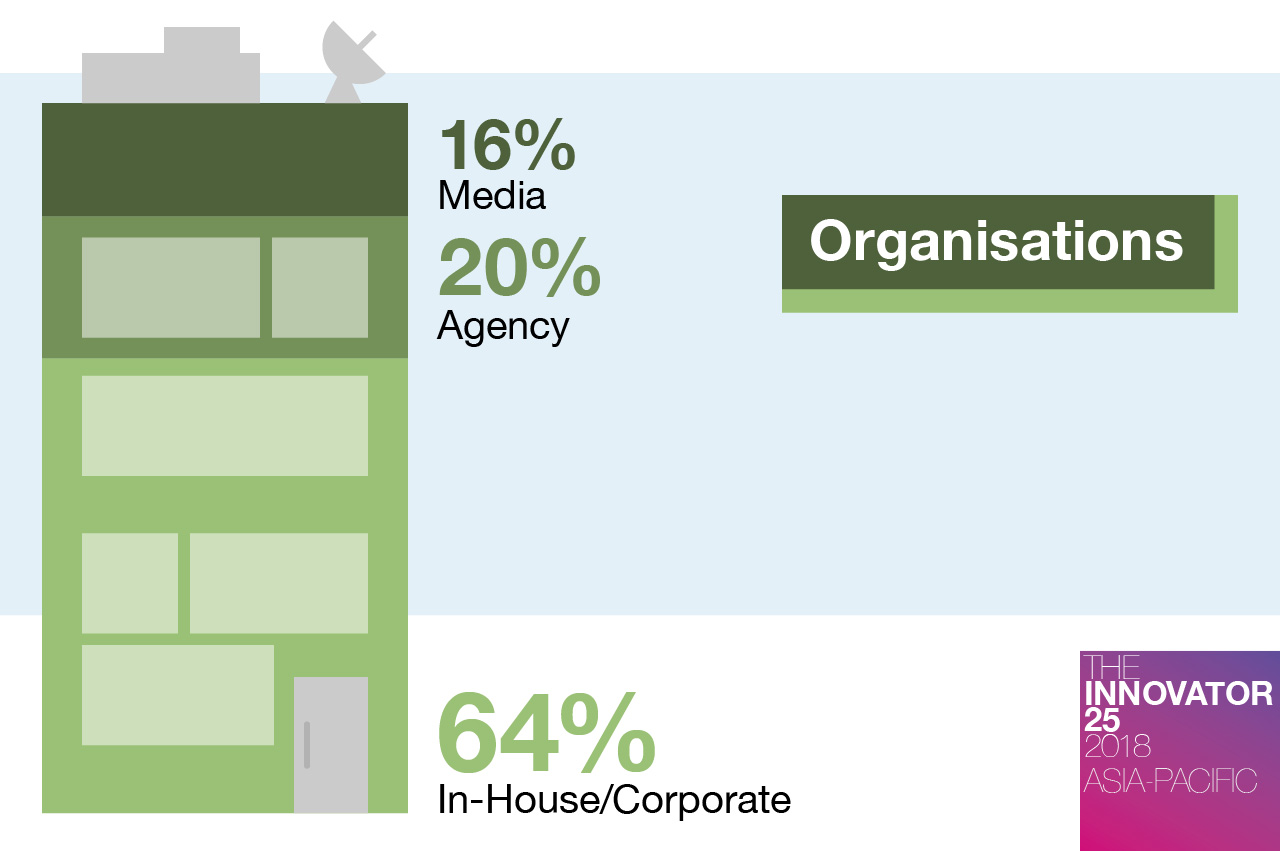 Each of the Innovator 25 profiles explores their views towards the state of industry innovation, while also providing unique insight into the habits and learnings that drive our class of innovators. Many, for example, prefer the morning when it comes to looking for inspiration. "I'm an early bird and I think and process stuff early in the day," said Temasek's Lena Goh.

"The early morning is my favorite," adds BCW's Joe Peng. "It’s the time when I can feel the endless possibilities of what the day could bring."

"Very early morning, as the sun is rising," said Sling & Stone's Vuki Vujasinovic. "Especially if you're outside, without a smartphone, and exploring while your city or surrounds are slowly waking up."

Almost as many, among them Zeno's Papri Dev, chose the late night for similar reasons — a sense of space and time. "Post midnight. its quiet and allows me to read and think in peace."

Wipro's Bianca Ghose also prefers the evening. "Late at night, the hour or so post dinner and before sleep.   Quiet nights, post work, with dimmed lights and fading sounds from the traffic out somewhere are great for me to evaluate, plan, dream in. It feeds my imagination."

Others were less conventional when it came to picking their favourite time of day. Anytime I’m standing — whether waiting for the bus, at the supermarket check out or about to board a flight," says Onyx Hospitality Group's Charles Yap. "That’s why I have a stand-up desk." Or, as Spotify's Joanna Wong put its: "Afternoon coffee break paired with Spotify’s 'Your Favorite Coffeehouse' playlist".

And Text100's Mei Ling Yeow probably wins for the most honest response: "Dessert time. Stressed spelt backwards is desserts and a beautifully plated dessert is a truly lovely experience for the senses."

Elsewhere, our Innovators offered some sterling advice for those seeking to extricate themselves from a creativity rut. "I go on diving trips," says Grab's Cheryl Goh. It’s important to find time to recharge – it’s better for your mental well-being. On a regular basis, I hike and dragon-boat. Being outdoors and in the vast expanse of nature have really helped me to decompress mentally and physically."

"Knowing the past well is a shortcut to getting out of a rut," adds Dentsu's Akira Suzuki. "Without knowing the past, we cannot judge what is new and what isn’t new."

Most favour an approach that takes you away from work. "Stop doing it and go for a run," says Ketchum's Jon Chin. "It really helps!" Or, more simply, "stop trying", says Manulife's David Norris.

There were also some interesting responses when we asked our Innovator 25 class what they would be doing if they were not in their current jobs. "Forest ranger or K-Pop star," says Weber Shandwick's Tyler Kim, while AB Inbev's Rebecca Kuo opts for "global traveller."

J&J's Richa Goswami is certainly not lacking for options. "So many things.. a lawyer at the UN fighting for atrocities against humanity. A rockstar like Bono. A chef like Antoine Beauvillier as I love cooking and travelling...or the owner of a global chain of boutique hotels."

"I would definitely be on Broadway," concludes Amadeus' Karun Budhraja. 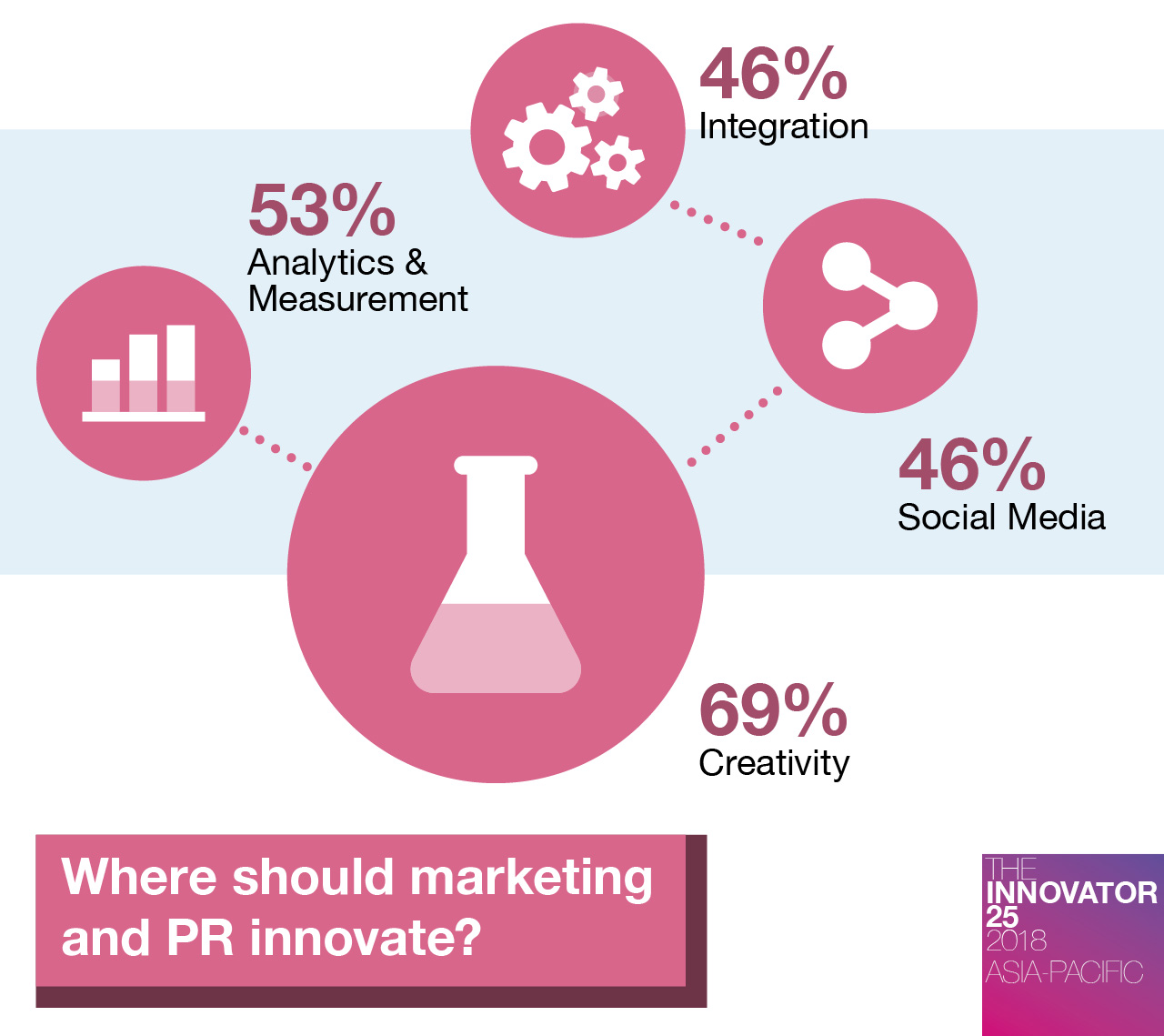 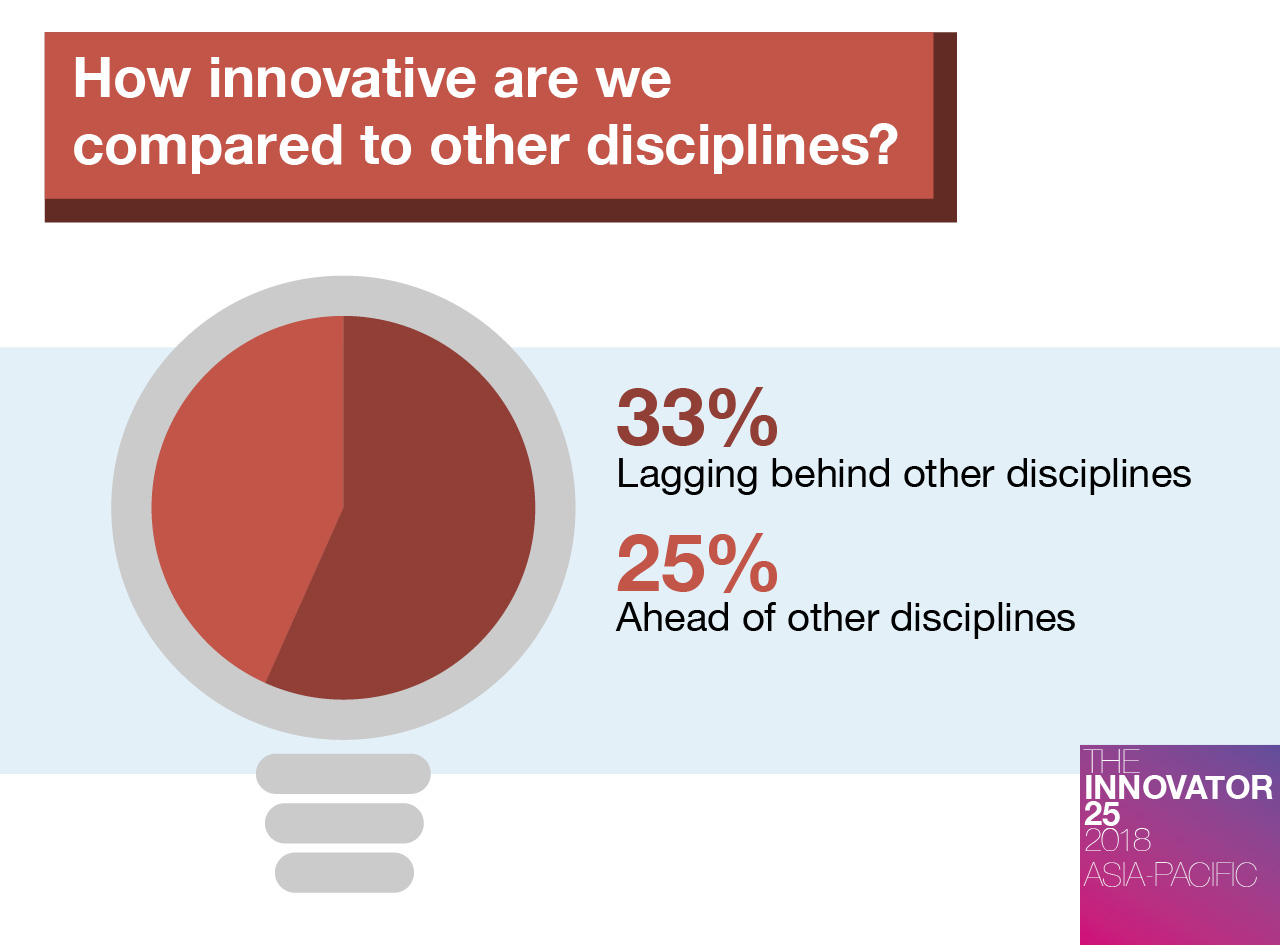 Unfortunately, only 25% think communications is ahead of other marketing disciplines in terms of innovation, compared to 35% in last year's study. This year, 35% think the PR industry is lagging. 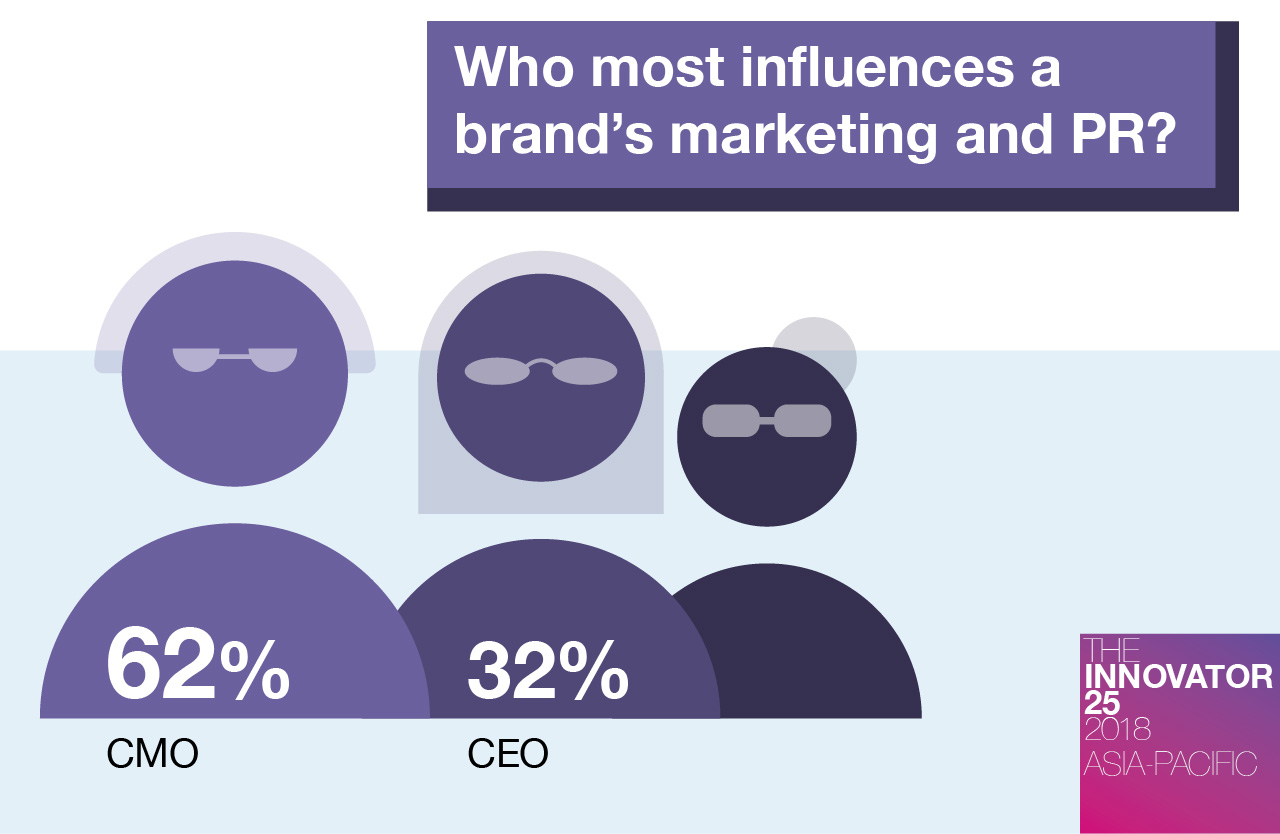 When asked who most influences how innovative a brand’s marketing/PR is, the CMO continues to reign supreme, with 62% of the vote, ahead of the CEO (32%). Neither the CCO nor agencies garnered any support. 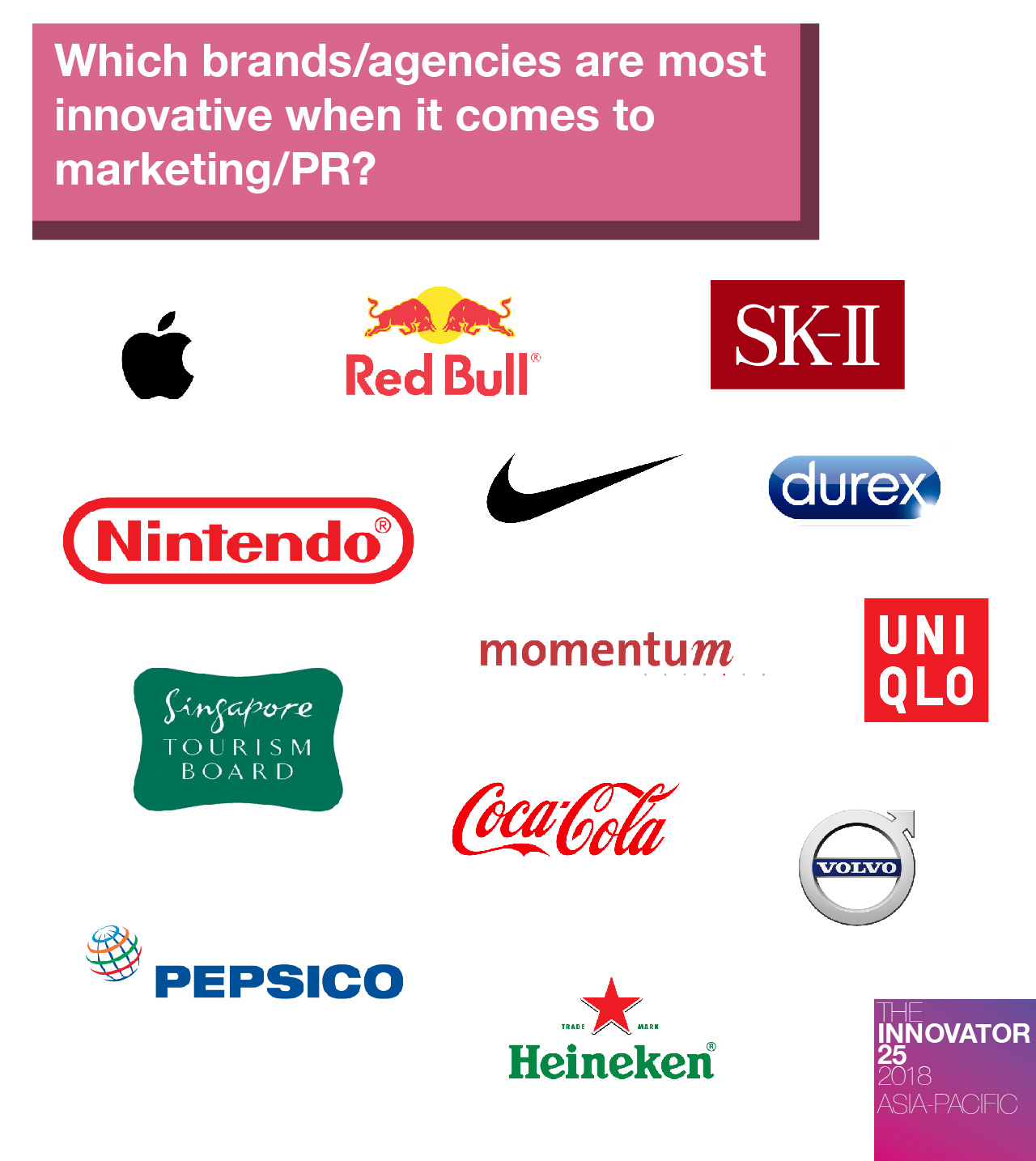 Which brands and agencies do they find most innovative? Singapore Tourism Board, Uniqlo, SKII and Nintendo were the Asian brands garnering sustained support alongside the the usual international suspects — Nike, Apple, Red Bull, Volvo, Pepsico, Heineken, Momentum, Durex and Coca-Cola.

You can read all of the Innovator 25 Profiles, and explore their inspiration, advice and career learnings, using the navigation menu on this page.