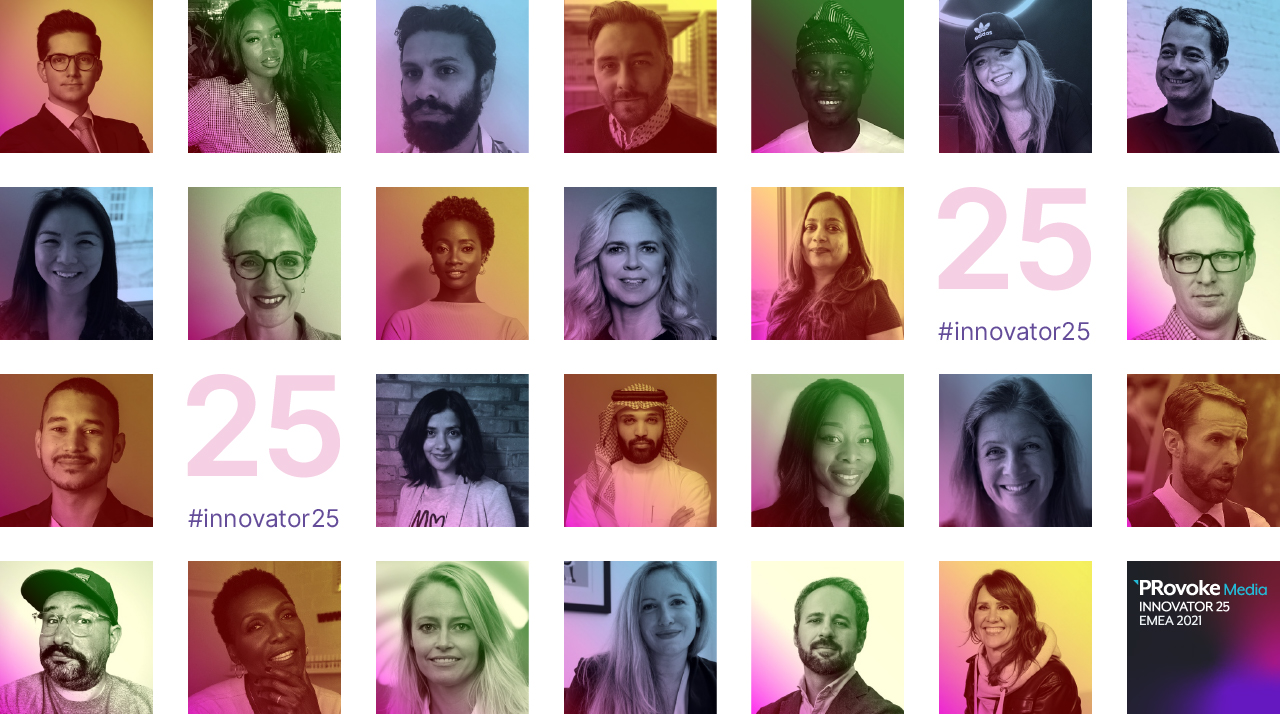 This year marks our seventh annual Innovator 25 class in EMEA. Once again, this year’s list features remarkable innovators who are addressing the industry’s challenges with ingenuity and creativity to make meaningful (and hopefully lasting) change at time when it's needed more than ever. The tumultuous past 18 months have forced the industry to embrace change and continue to reimagine the future of work, campaigns and live events.

As last year, many of the innovators on the 2021 list are leading the way – often vocally – on breaking down barriers and moving beyond talk to action on diversity, equity and inclusion, both within the communications world and in wider society. The EMEA cohort also includes pioneers of new agency models and B Corp champions, as well as those dedicated to proving the value of PR to businesses via data, analytics and new technology, and those who are producing inspiring, groundbreaking creative work.

This year, we celebrate professionals who are innovating within traditional organisations, and those who are leading the way in communications for new industry areas and categories. Above all, everyone in the Innovator 25 EMEA has more than risen to the occasion in this second tough year of the pandemic.

As last year, 56% of our innovators for 2021 are women, and the list is again diverse, with more than half (52%) being people of colour, including 20% who are Black. Most (60%) of the cohort come from an agency background, 28% are in-house practitioners, and 12% are from other organisations.

We once again feature one communications innovator from the region who isn’t, in fact, a comms professional. This year, after the welcome report of live international sporting events, England men’s football team manager Gareth Southgate stood out as one of the most natural and instinctive communicators in the world and demonstrated true leadership.

Southgate is one of 14 Brits in the Innovator 25 for EMEA this year: unsurprisingly, the highest proportion of the class are based in the dense UK market, with other markets represented including the UAE, South Africa, the Netherlands, Sweden, France, Germany and Spain.

Each of the Innovator 25 profiles explores their views towards the state of industry innovation, while also providing unique insight into the habits and learnings that drive our class of innovators. Perhaps unsurprisingly, the early morning and late evening dominate when it comes to our class' favourite time of the day.

Simply Thought founder Kristian Hoareau Foged is one of those who like late nights: “I'm a night owl and do my best thinking when the world is quiet. Whether reading, writing or just watching something interesting, I love the hours between 10pm and 1am.”

Among the early risers in our cohort is Omar Batterjee, head of marketing, communications and partnerships at the Saudi Esports Foundation: “Mornings are my favourite. I feel energized and enjoy the brightness of the sunlight through the window. That combined with the smell of coffee makes me want to open up my laptop and just start writing.”

BlackHouse Media founder and CEO Ayeni Adekunle is also energised in the mornings – “Early morning between 5am and 8am. Emails are quiet, there are no meetings, and my brain is on fire” – as is The Body Shop’s global head of PR, Sanjani Shah: “Over lockdown, I changed my routine, and my mornings are for walks, or exercise or wild swimming. It’s precious time dedicated entirely to me and my wellbeing and I’m quite ruthless about safe-guarding it.”

MyBlaqBook co-founder Brenda Juliet, on the other hand, says it depends on the season: “During summer, it’s the morning because I love the ‘start of day’ freshness with the sun beaming though the windows, but during winter, it’s the evening as I like to get all cosied up at the end of the day.

Jennifer Cheung, head of brand at Orgvue says it’s whenever she can take time for yoga: “I prefer a longer practice so the mind can settle and focus on the flow. It feels like a real treat to shut out the world.”

And Polpeo founder Kate Hartley likes to mark the end of the working day: “When I finish work in the evening, I go downstairs and my wife and I will play music and dance round the kitchen. It's the best commute ever.”

At Weber Shandwick’s production company That Lot, head of video Ben Forder also has a particular moment in mind: “I’ve always been a night person – but if I had to pick an exact time then definitely 6:55pm, five minutes before we often go live on a broadcast and the moment you can feel the adrenaline and excitement sizzling off the entire crew. It’s akin to that first dip on a rollercoaster – you have to trust yourself that you have everything thoroughly planned and prepped, and from there just hang on for the ride! It’s exhilarating for everyone involved.”

There were also several noteworthy responses when our Innovator 25 class was asked what they would be doing if not in their current jobs.

Perhaps unsurprisingly, many of the responses centred around other creative industries, including working as a music journalist, performing on stage, and writing novels or poetry. Ketchum’s ECD in the UK, Indy Selvarajah, said he would be “working at the Jim Henson studios” in another life; Rise at Seven co-founder and CEO Carrie Rose said she’d “be creative director at the biggest advertising agency in the world showing them what’s possible”; and consultant Omar Zaafrani, formerly of ADNOC, said he would be “making movies. From a young age, I’ve always had a passion for film. I wanted to be in the movie business, telling great stories, captivating audiences and evoking emotions.”

Journalism, the flip side of the comms coin, was the choice for others, including The Purpose Room founder Sudha Singh, who said “I would have been an activist journalist working for the International Consortium of Investigative Journalists, if not covering geopolitics in the Middle East.” And Hollard Ghana Holdings group head of marketing and corporate affairs Cynthia Ofori-Dwumfuo said: “I would be a journalist telling African stories. Although I pursued marcomms as my first love, I previously dabbled in radio, so journalism is the one that got away. Alternatively, I’d make a great travel curator, given my love of travel, exploration, and delicious food.”

A handful said they would be teaching, including Current Global co-founder and CEO George Coleman: “I'm attracted to curious minds, so I'd probably be a teacher or researcher.” And there were a couple of honourable mentions of sporting dreams, including MSL UK group CEO Chris McCafferty, who said he would be “packing my bags to go to Australia to open the batting in the Ashes,” and Narva CEO Frida Dahlgren, who said she would be a professional soccer player.

Other passions would be turned into alternative careers by a number of innovators: Hera Communication Strategies founder  Anna Geffert  would be “running an organic vineyard and yoga retreat in France – still the dream” while i-Sekai founder and CEO Cornelia Kunze would be “a traveling author and a sustainable fashion label entrepreneur.” At French fintech Itiviti, head of global marketing and communications Mireille Adebiyi said she would be “a professional foodie or an interior designer” and Astute.Work owner Sarah Waddington said: “I love choosing presents for people and once seriously considered launching an online personalised gift service. Right now though, I'd be happy to extend our camper van hire business.”

A number of our innovators would be working to effect wider change in the world. H+K’s director of communications, corporate and public affairs in the Netherlands, Eske van Egerschot-Montoya Martinez, said she would be “leading an organization that helps people, who just need one shot/break, to get the job of their dreams by offering them education, income, mental and physical support.” At energy company Enel Group, head of comms João Duarte said he would be “focusing all my energy in unleashing the power of communication for change in the decisive decade we have ahead of us to contain global warming and climate change effects that risk to make large parts of the world uninhabitable by 2030.” At Africa No Filter, executive director Moky Makura said – with the caveat that “This job was made for me. It’s a God-given role.” – that if she had to change jobs, she would be “running a content platform of some sort linked to storytelling.”

Finally, Don’t Cry Wolf founder John Brown gave the ultimate compliment to a rival UK PR firm, saying that if he weren’t running his B Corp agency, he would be “applying for a job at Manifest.”

You can read full profiles of this year's Innovator 25, including their Q&As on innovation, by clicking on the individuals’ names in the right-hand column.

Other insights and trends from this year's innovators can be seen in the infographics below, including the organisations they come from, their collective take on the PR industry's strengths and weaknesses when it comes to innovation, and more. 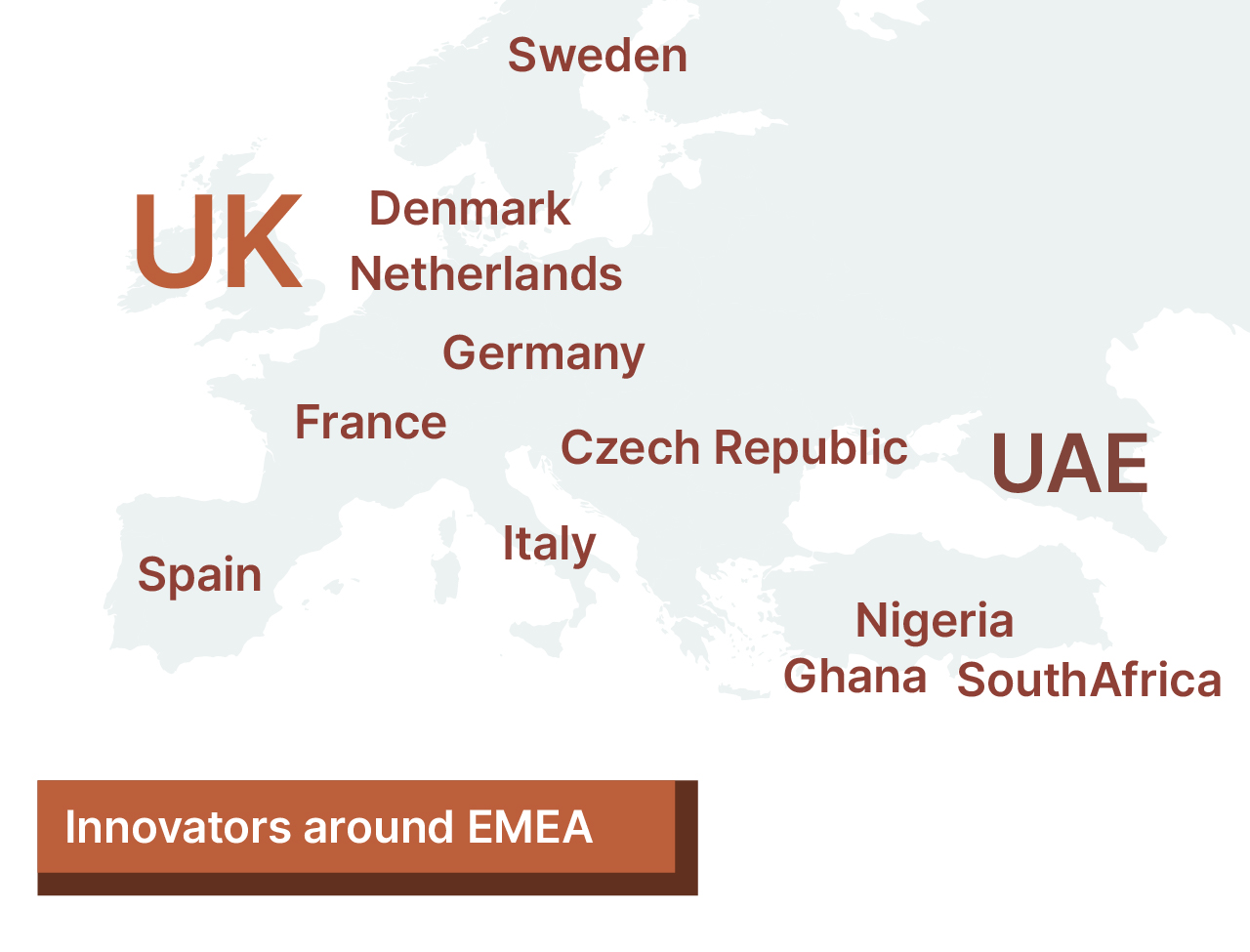 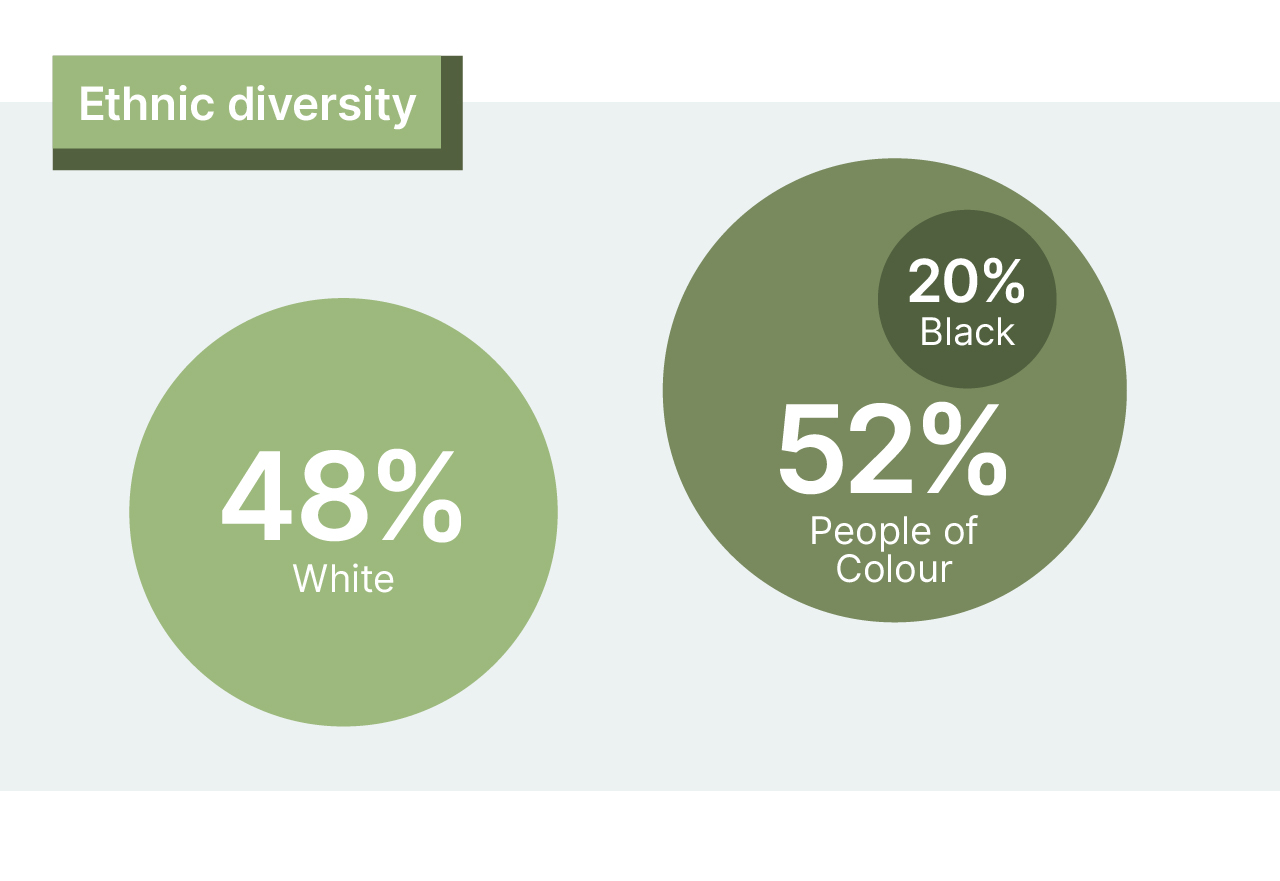 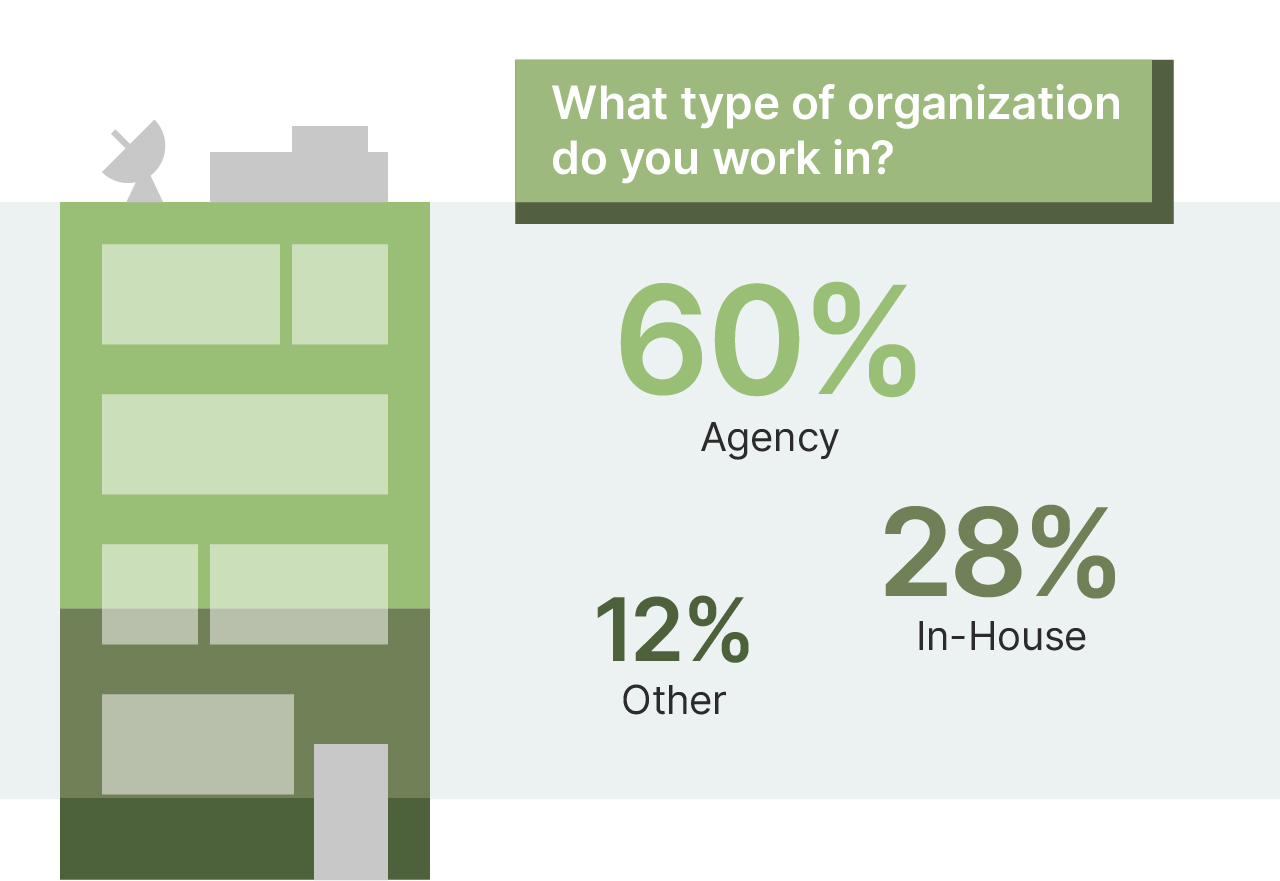 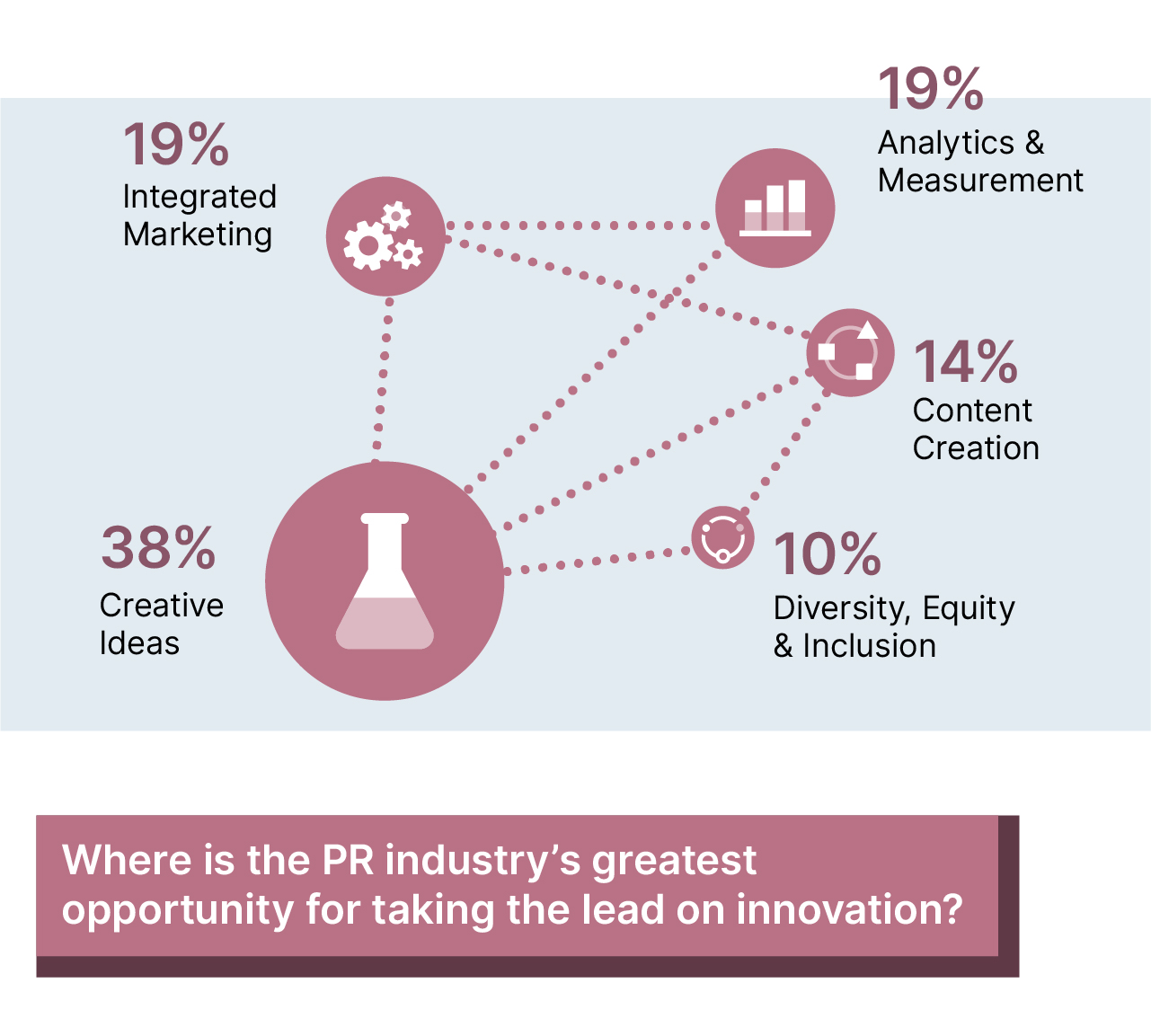 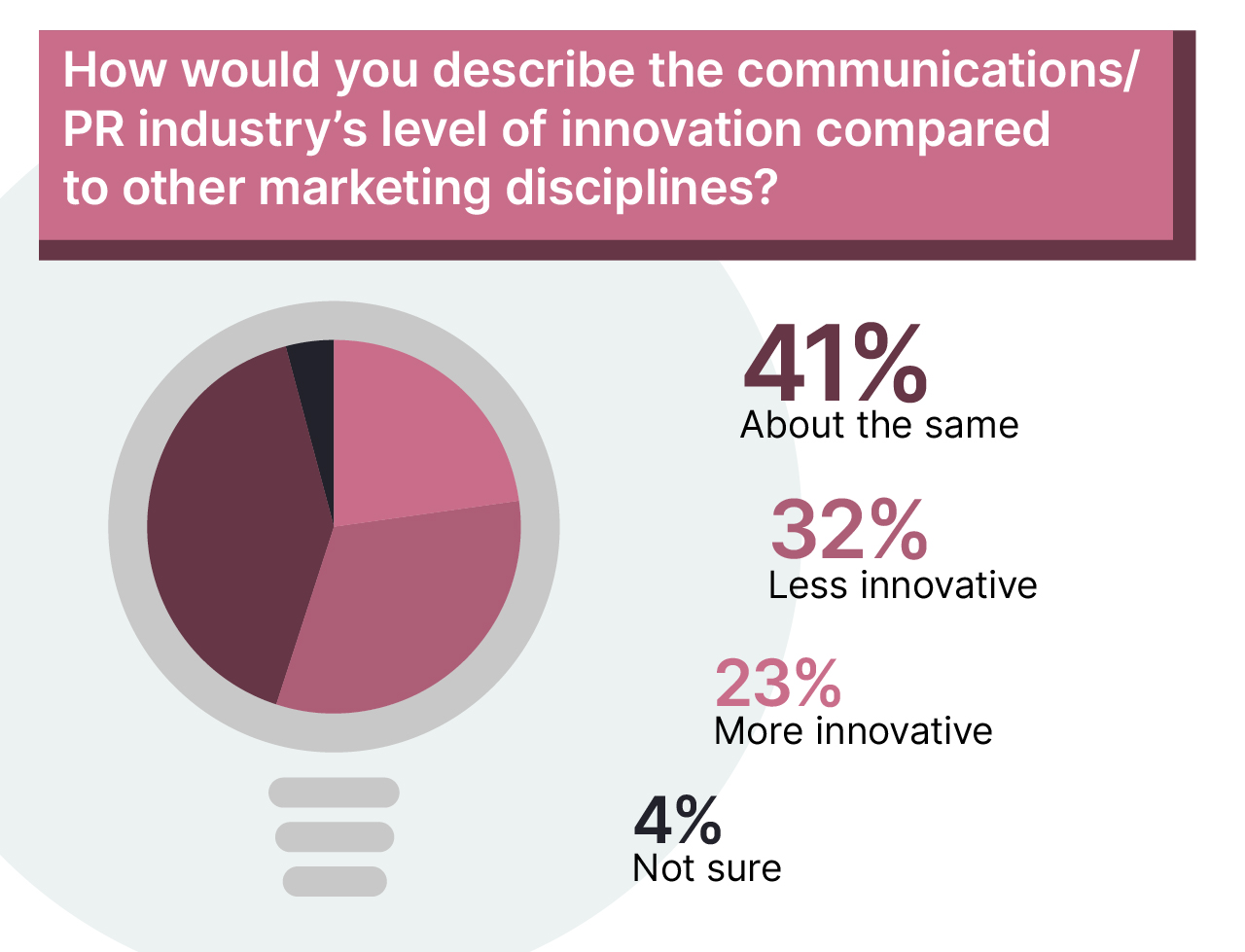 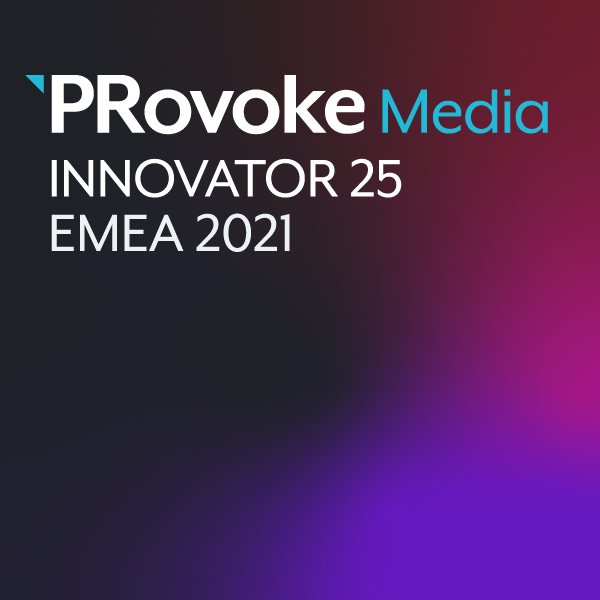 Don't miss the chance to showcase your best work!