As in 2017, there’s a broad spread of disciplines across the Global Fast Movers ranking, including consumer, corporate and public affairs heavyweights on both sides of the Atlantic, and healthcare, travel, tech, financial services digital and social specialists. However, in terms of geographic spread, this year’s ranking is markedly different from 2017. While a third of last year’s top 15 was made up of representatives from India, South Africa, China and Australia, the 2018 ranking has only one agency from outside the US and Europe: Singapore’s technology specialist IN.FOM, which grew by 50% and appears in 15th place.

This means the US is even more dominant in the global ranking, with seven agencies in the table. The highest ranking American firm is third-placed New York tech-driven marcomms agency Hudson Cutler & Company, which grew by 209% after its merger last year with Put Together Media. It’s followed in 4th place by travel specialist NJF, which was acquired by travel marketing firm MMGY Global last year and grew by 93%.

There are two UK agencies in the table: in the top spot for 2018 is new creative shop Talker Tailor Trouble Maker, which had an impressive year, growing by 284% to $1.3m (also putting it at the top of the European ranking). And in 14th place, corporate and public affairs consultancy Headland, which performed strongly and grew by 51% to $9.67m.

Because rapid growth tends to favor boutiques, we again looked at the fastest-growing larger PR firms, with revenues of more than $30m. UK firms, which were the three highest performers in the category on our 2017 list, are notably absent from this year’s top 10 — with two of them, Newgate and Hotwire, having recalibrated after major acquisitions. Japan’s Vector was the fastest-growing firm among this year’s biggest players, with fee incoming rising an impressive 38% to $146m – by far the biggest number registered by any firm on the list.

US firms, of which there were just two last year, rose up the ranks. Prosek Partners, which had the second-largest growth of the group, saw its fee income lift 32% to nearly $42m. Reflecting the hallmark year for midsize firms, the others are a diverse mix serving the breadth of industries — GCI Health, Marina Maher Communications, SKDKnickerbocker, Carmichael Lynch Relate, M Booth, W2O Group and Allison+Partners. Sweden’s H&H Group, in third spot, rounds out the group.

The 10 players that make the ranking this year in the US are generally smaller in size than last year’s crop — but they grew at a greater rate. Seven of the 10 saw income fee rise by more than 51%; the other three expanded by 45% or higher.

Tech-focused Hudson Cutler & Company was far ahead of the pack, seeing its fee income in 2017 hit $2.2m — an impressive 208% lift. Second-ranked NJF, which caters to the travel and lifestyle industries, grew by 94% to $9.2m. Day One, Vested (2017’s top performer) and Praytell are the only members of last year’s top 10 to make the cut again in 2018. The inclusion of two healthcare agencies (CURA Strategies and Health Unlimited), two multi-practice agencies (Nebo and Nyhus Communications) and a tech-focused firm (Bospar PR) in the group shows firms serving various sectors are benefiting from expansion.

Agencies outside the US didn’t grow at as great a rate as their US-based brethren, but business did pick up from the year before. Costa Rica's Comunicación Corporativa Ketchum, the fastest-growing player for the second consecutive year, grew in 2017 by 42.5%, up from the 28.5% lift it had in 2016. Three Brazilian firms, Race Comunicacao, RMA Comunicacao and Grupo CDI (ranked 3rd, 4th and 9th respectively) made the cut, versus just one (RMA) the year before. Canada’s Tact Intelligence-conseil (2), Veritas (5), and Proof (10) all returned to the list, as did Mexico’s Another Company. Argentina’s URBAN Grupo de Comunicación and Columbia’s AXON are new entrants.

It’s a completely fresh European ranking this year: not one of the listed agencies appeared in the 2017 chart. Talker Tailor Trouble Maker scores a double, taking the top spot in the European Fast Movers ranking as well as the overall Global table. The hot London creative comms agency grew 283%, albeit off a very small base, taking its fee income in its second year of business to just over $1.3m by bringing on board big-name clients such as Wagamama, Mastercard, Deliveroo and Direct Line. And it's the only UK agency in the European top five, compared to last year when four out of the top five agencies were British.

In total there are three UK agencies in the top 10, the others being financial, corporate and public affairs firm Headland Consultancy, in 7th place with fee income up 50.5% after something of a watershed year for its growth, and tech outfit GingerMay PR, which has offices in New York and Berlin as well as London, and claimed 9th place with growth of 43.3%.

The top two agencies were streets ahead of the rest of the ranking in terms of growth. Second place this year goes to digital, content and PR consultancy Akima Media, headquartered in Germany with more than 20 offices across EMEA, which had a storming year, growing fee income by 244%. There were notable performances from other firms across a wide swathe of Northern Europe, with only one agency in the ranking, Canela Public Relations, coming from the Mediterranean. Canela, which represents Spain and Portugal in Brands2Life’s independent network, comfortably grabs third place with growth of close to 90%.

Representing the Nordics in the ranking is Sweden’s Rud Pedersen, which grew 69% in another year of rapid expansion. It’s one of three public affairs agencies in the European top ten, alongside Headland and Belgium’s Interel, whose acquisition of $10m Washington lobbying firm Association Management Group contributed to growth of 75%, making it the world’s largest independent public affairs consultancy. Other sectors represented in the ranking are technology, consumer and healthcare.

Also featuring in the top 10 are sixth-placed Dublin-based health communications agency Kyne, which grew by 63% to $9.6m after a year in which it tightened operations and attracted big new private and public sector clients, and Croatia’s full-service Communications Office Colic, Laco & Partners, part of the PROI network, which grew 43%. Finally, Paris-based Monet+Associés, which has four divisions covering corporate, food, lifestyle and children, comes in at 10th place with growth of 42%.

The Asia Pacific, Middle East and Africa fast movers might not quite be showing the same kind of growth as those at the top of this year’s USA and European rankings, but that is partly down to the fact that publicly-held agencies do not break out their regional revenue growth. Regardless, the top five all showed constant currency growth of comfortably over 40%. The ranking features agencies with fee income ranging widely from $2.6m up to $146m, across a spread of sectors including technology, healthcare, corporate, public affairs, integrated and digital marketing.

China contributes only one agency to the top 10, full-service consultancy CYTS-Linkage, which was at number one last year with 80% growth in 2016, and this year is still in the top five after impressive growth of more than 45% in 2017. India supplies two agencies to the regional top 10 this year, compared to three last year, with Pitchfork Partners taking 2nd place and Media Mantra in 6th spot.

Singapore technology agency IN.FOM once again makes an appearance in the ranking, this time in the top spot. The seven-year-old agency – whose clients include Microsoft and Nokia – may no longer be a boutique, but it’s still out-performing the rest of the region, with growth a whisker away from 50% to fee income of $3.7m. Managing partner Wong Voal Voal said: “The world of communications is at a critical juncture today where brands need to drastically reinvent conventional strategies. It is always humbling for us to see clients believing in our vision - an agency created with a blank canvas for next-generation practitioners to reimagine communications.”

Japanese heavyweight Vector – based in Tokyo and with offices across Asia – again features in the table, in 9th place with growth of 38%, taking it to fee income of $146m. Other Asian agencies in the ranking this year are Enzaim Health from the Republic of Korea, in 4th place with 47% growth, and stakeholder relations agency EON from the Phillippines, which grew by 30%.

Australia also had a good year, claiming two of the top ten: Herd MSL, our Australasian Agency of the Year for 2017 – launched by Publicis last July after the acquisition of The Herd Agency – grew 43% to $8.3m. It is followed closely by Sydney-based PR, issues management and strategic comms firm Sefiani Communications Group, which grew by 38% last year.

But there is a notable lack of representation from the Middle East. And only one African agency makes the top 10 for the region: Johannesburg-based integrated agency Clockwork Media, which also featured last year and this year takes third place with growth of 48% to $4.96m. Managing director Tom Manners said: “We managed to sustain the growth curve we set in 2015 and 2016 by focusing on our core business while also venturing out into new territory. Our most exciting win was Microsoft’s WDG digital business which has seen us handle campaign builds in 46 markets. Being given the opportunity to work at a global level has taught us a tremendous amount and we look forward to maintaining momentum in 2018.” 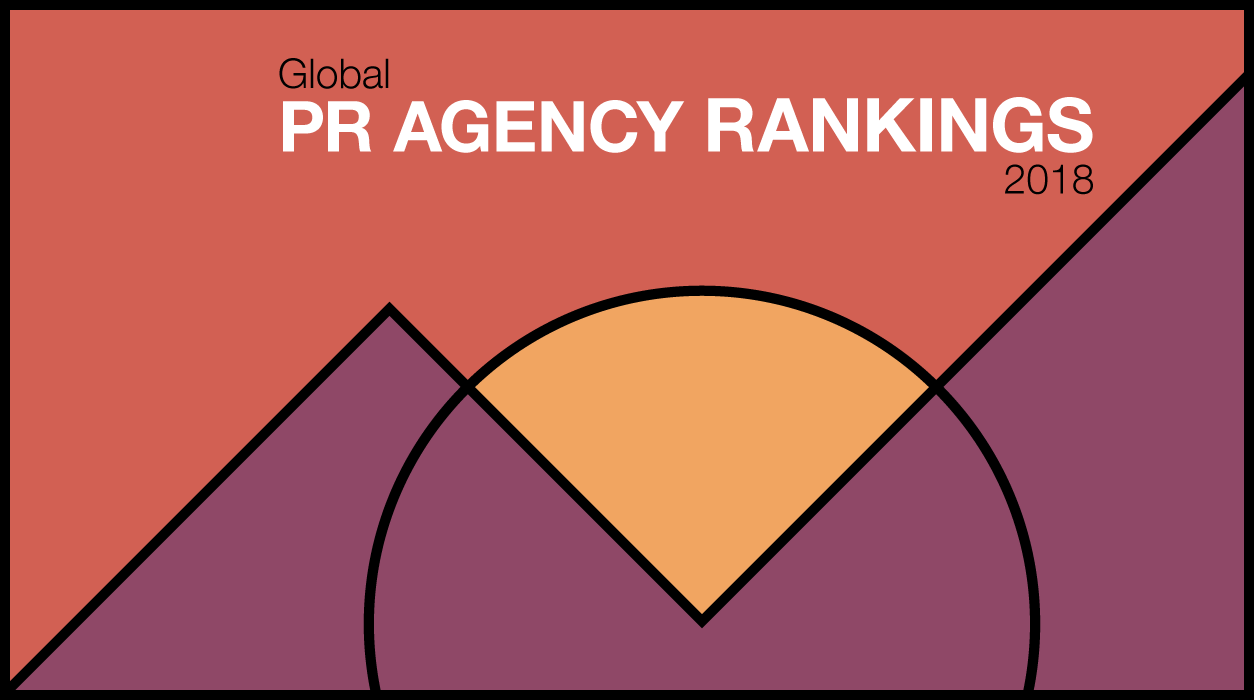