The ability to attract top talent is still the biggest concern for public relations agency leaders around the world, according to a survey conducted by The Holmes Report and ICCO (and powered by Newlio) as part of the World PR Report.

This year, more than four out of 10 (44%) of consultancy principals around the world cited "staff recruitment" as one of the most significant challenges facing PR firms in their market. That was an increase over last year (39.9%). 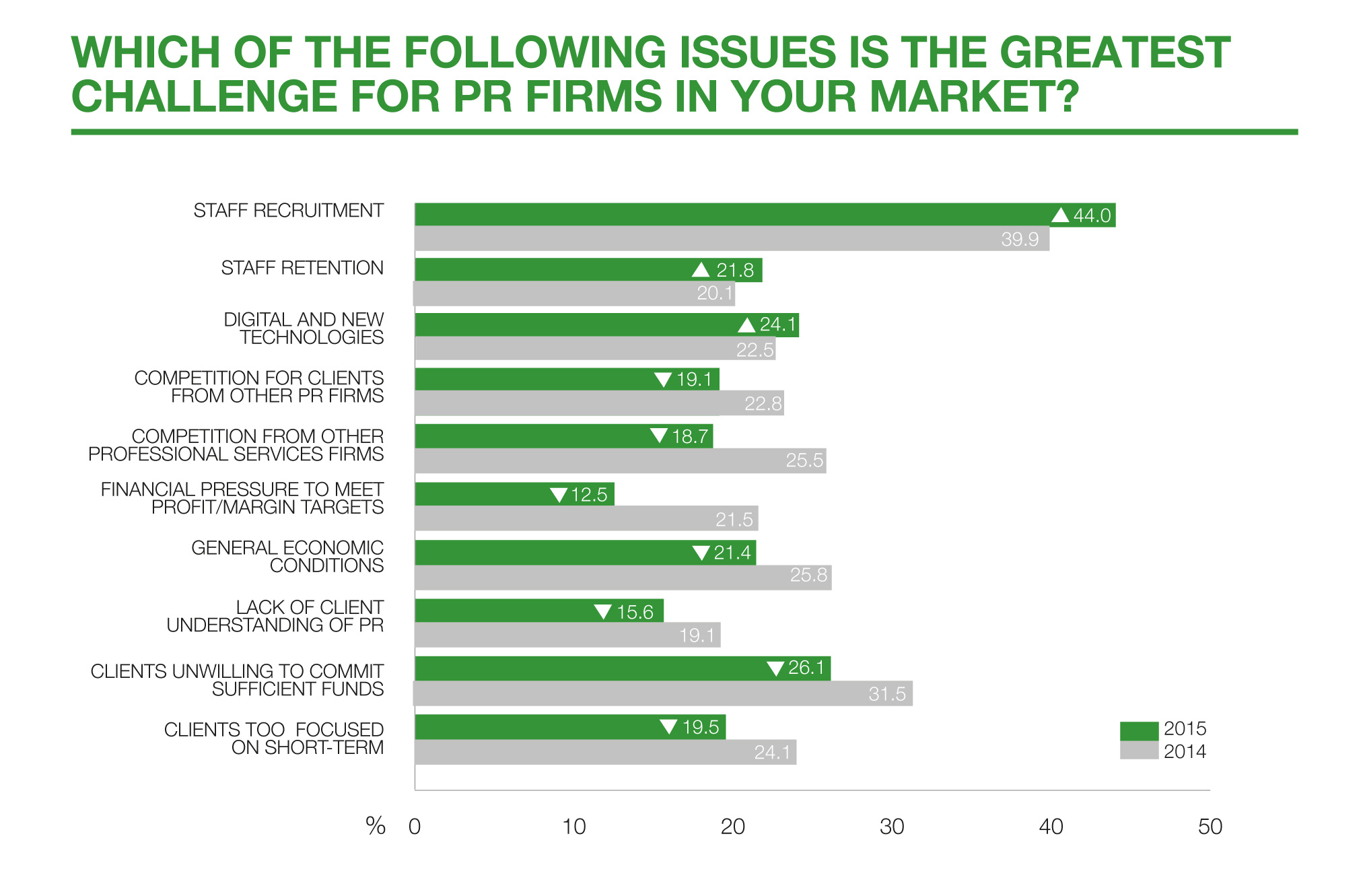 At the same time, there was growing concern over the supply of "intelligent, well-educated talent" for PR agencies to recruit, with agency heads less confident (5.76, compared to 6.01 last year and 6.13 in 2013) that such a supply existed.

"Modern public relations requires a much more diverse set of skills," said Paul Holmes, founder and CEO of The Holmes Group, "and PR firms are increasingly worried about being able to find people with those skills. We have suggested several times that while PR is growing, it is not growing as fast as it could be given the new opportunities presented by the social and digital media revolution. It’s not unreasonable to suggest that the inability to find new people is holding us back."

"There is a definite war for talent going on right now, particularly ar wound the senior account manager/account director level. Employers should expect to see their wage bills increase in the short to medium term, as employees ask for more", said Francis Ingham ICCO chief executive and PRCA director general.

Concerns were strongest in Asia (5.43) and the Middle East (5.67) while only agency leaders in North America remained relatively sanguine (6.22) about the supply of talent.

A paucity of senior staff was the greatest concern in terms of talent, cited by 46.4% of respondents globally, ahead of mid-level staff (42.9%). There was considerably less concern about the pipeline of junior staff, cited by just 6.3% of respondents. 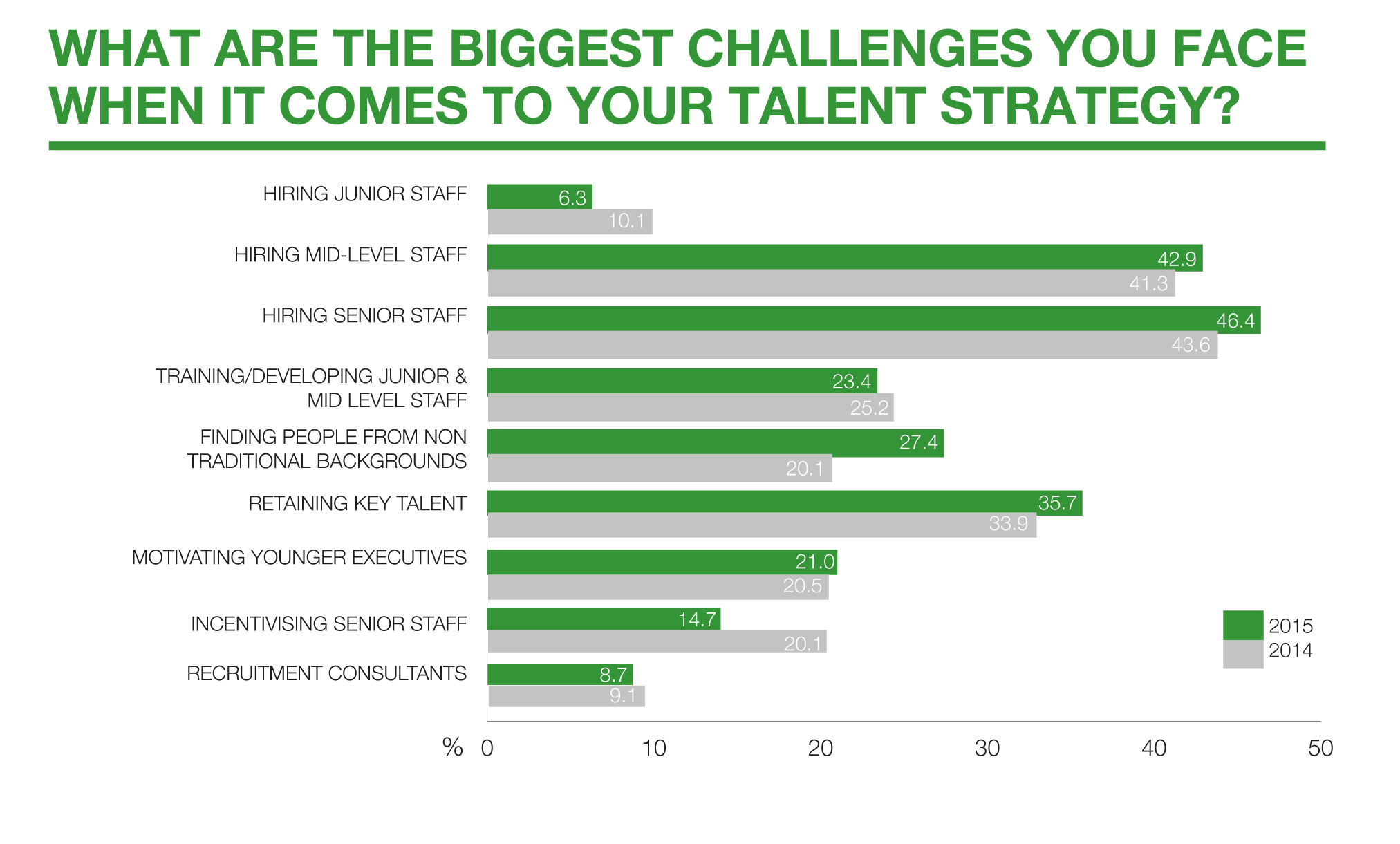 Senior staff are most difficult to find in Eastern Europe (48.5%) but considerably more plentiful in Western Europe, where only 39.6% expressed concern about their ability to find top-level talent. Midlevel talent is a major concern for North American agencies (48.6%), those in the UK and Ireland (51.4%) and firms in Asia (52.3%), while junior talent is a much greater concern in Asia (9%) than in other markets.

Finding people from non-traditional backgrounds is particularly problematic in Latin America (where 38.2% identified it as a major concern) but relatively easier in the UK and Ireland (25.3%). Motivating young people is most difficult in Asia (26.9%) but less of a challenge in North America (15.6%).

When it comes to sourcing new talent, most PR firms still find it easier to cannibalize their direct competitors—other PR agencies were identified as a key source by 65.6%—than to look elsewhere. Agencies in the UK and Ireland (81.7%) and North America (78.4%) were more likely to focus their recruitment on rival firms than those in less developed markets. 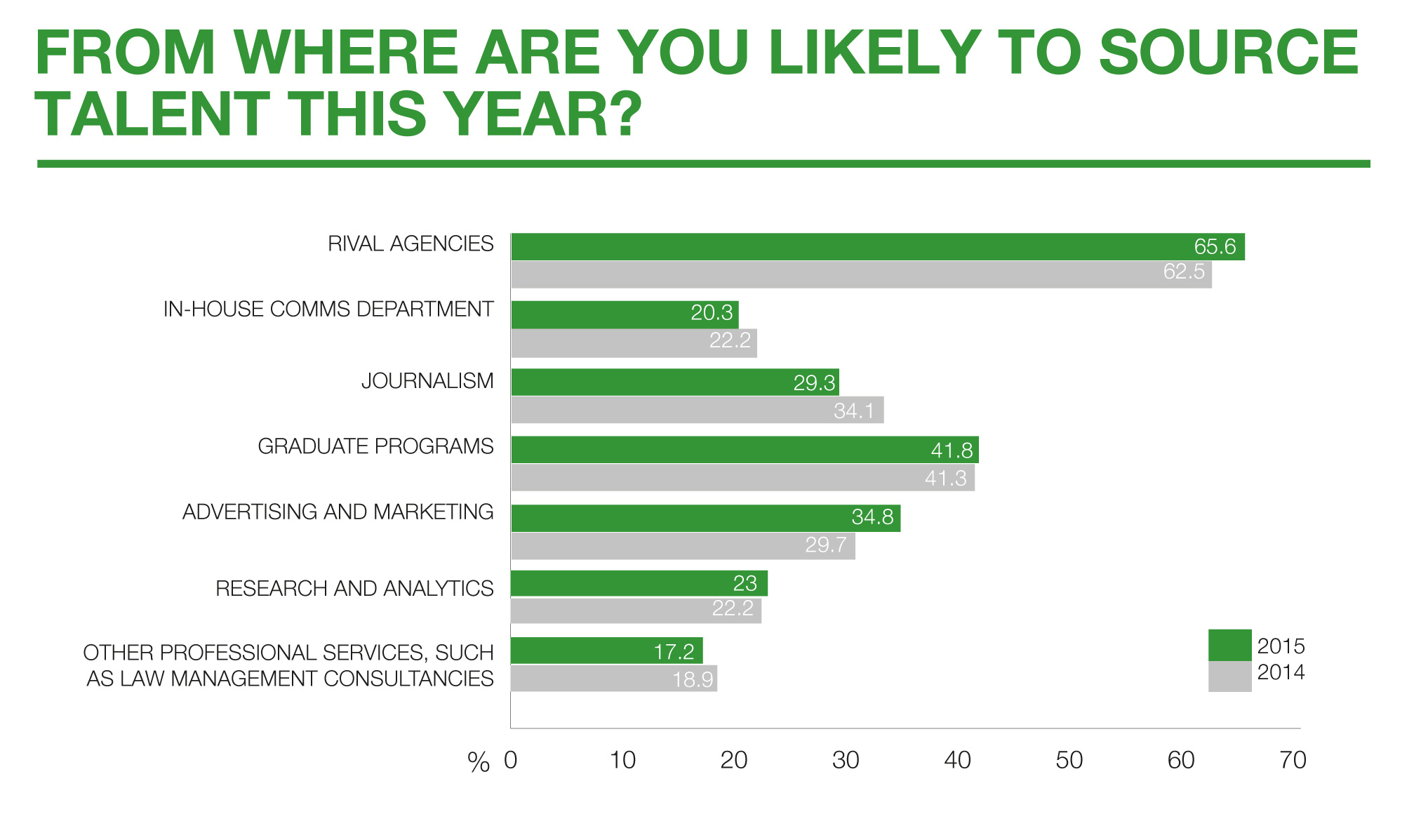 In terms of other sources, graduate programs (41.8%) were targeted by more firms than other advertising and marketing firms (34.8%), journalism (29.3%) and in-house communications departments (20.3%).

But more firms globally (23%) are looking to research and analytics for new talent—and interestingly, there is greater interest in developing markets such as Eastern Europe (31.9%), Asia (30.9%) and Latin America (30.4%) than in more developed parts of the world.

There is also more interest (17.2%) in looking to other professional services—management consultancy and law firms—for talent.

The biggest obstacle to recruiting from outside the industry, meanwhile, is economic: 50.2% of respondents say that expected salary levels make it difficult to bring in non-traditional talent, compared to 38.8% who worry about the lack of transferable skills and 25.5% who say potential recruits are just not interested.

The worry about salary levels is clearly related to PR agency principals’ second greatest concern—after recruitment—which is the reluctance of clients to commit to significant spending on PR, cited by 26.1% of respondents.

Among the factors perhaps influencing that reluctance: a continued concern about the general economic conditions (21.4%) and too much focus on the short-term (19.5%). The economy is a particularly big worry for firms in Eastern Europe (30.4%) while a short-term focus appears to be more of a problem in North America (21.4%).

On the other hand, it looks as though firms are making progress on measurement and evaluation: the difficulty of measuring PR efforts was cited by 11.7% of respondents this year, down from 13.8% last year and 17.5% the year before.

"Welcome as that news is, we do need to do more here. Strong evaluation skills are a prerequisite for PR success," said David Gallagher ICCO president and Ketchum EMEA CEO.