Please refer to our Privacy Policy for important information on the use of cookies. By continuing to use this website, you agree to this.
Home Research Global PR Industry Hits $14bn In 2016 As Growth Slows To 5% 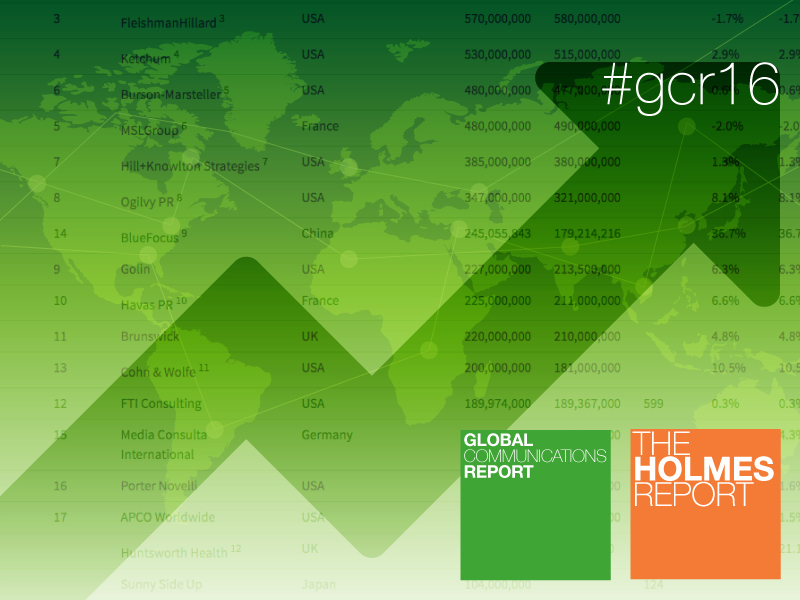 The Holmes Report unveils its ranking of the world's top 250 PR firms, revealing that growth slowed in 2015, particularly at the large publicly-owned PR networks.

Global PR industry growth slowed to 5% in 2015, based on the Holmes Report's definitive annual ranking of the world's top 250 PR firms, which is now live.

The Global Top 250 is part of the 2016 Global Communications Report,  which provides the clearest picture available of the global PR industry, based on submissions from more than 400 PR firms across the world, and a landmark survey of more than 1,000 senior industry executives.

Accounting for the numerous firms that reported outside of the Top 250, along with the vast number of smaller firms that do not provide revenue figures, the Holmes Report now estimates the size of the global PR agency industry at $14.2bn, up from $13.5bn in 2014. Meanwhile, Global Communications Report research finds that the industry is expected to reach $20bn by 2020.

However, there are concerns about revenue per capita. This year's Rankings reveals a decline in revenue per capita for those firms reporting both fee income and headcount to an average of around $151,000, compared to $158,000 last year.

"The decline in revenue per head is perhaps the most troubling aspect of our survey this year," said Holmes Report CEO Paul Holmes. "It’s easy to point the finger at procurement, but the fact is that these numbers suggest PR is still seen by many clients as a commodity rather than as a value-added service."

Once again, currency volatility softened overall growth, as the Global 250 is calculated in US$. So, while US firms are unaffected, firms reporting in GBP and Euros firms drag the overall USD growth rate down to 3.8%. Yet, even accounting for that, constant currency growth was only around 5%, based on a like-for-like comparison of those firms reporting fee income for 2015 and 2014.

“At a time when engagement, authenticity, transparency, credibility—the things that PR is good at—are increasingly critical to successful brand-building, it is disturbing to see industry growth slowing, and indeed underperforming growth in the ad industry," said Holmes. "That suggests PR firms are either not adapting to the new multichannel communications landscape, or they have not yet convinced clients that they can deliver all of those things."

While independently-held PR agencies have been outperforming their publicly-owned peers in recent years, the gap narrowed considerably in 2015. Both groups grew at around 5% in constant currency terms, with all publicly-owned firms reporting fee income of $5.85bn, accounting for 42% of the overall market.

That may be because numerous publicly-held agencies are performing well, particularly the more entreprenuerial firms owned by such holding groups as MDC Partners and Next 15. The divide between independent and public PR agencies is more clearly seen when analysing the performance of the 'Big 4' holding groups, whose PR operations grew by 2.5% to $4.7bn, led by the performance of Interpublic Group PR firms.

"While the revenue growth at independent firms declined to the point that they are now almost in the same boat as the big, publicly-traded agencies, independents continue to take market share—despite the fact that many of the biggest and best have become acquisition targets," pointed out Holmes. "This suggests that if large agencies are counting on consolidation—clients looking to unify their PR globally with a single entity—they may be disappointed."

The most notable change among the world's top 10 PR firms is the arrival of China's BlueFocus in ninth position. Elsewhere, there was little change, with the Top 10 reporting fee income of $4.9bn, up 4.4% compared to 2014. 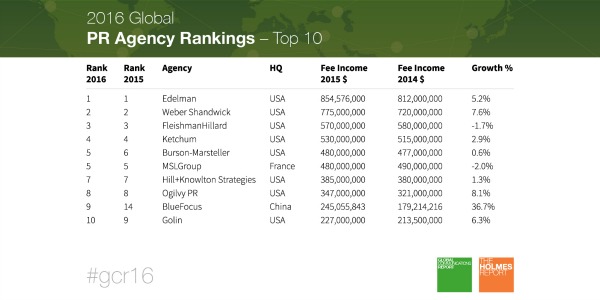 More analysis of the world's fastest-growing PR firms, along with specific regional rankings, will follow over the coming weeks.