In terms of geographic spread, this year’s ranking is even more dominated by the US than 2020, up from six to nine of the top 15 fastest-growing agencies in the world, including first and second place for two new hot shops, with Spool Marketing & Communications growing 173% to $2.2m and The Sway Effect growing 87.5% to $2.3m.

Third and fourth place went to the only two Asia-Pacific representatives on the table, down from four last year: China’s Topline Brand Management and India’s PR and digital agency Kaizzen, both up around 64%. In fifth place is the highest-placed of the four European entries in the Global table: the UK’s Milk & Honey PR, which grew by 62%.

One other UK firm makes an appearance: Tyto, in eighth place, after growing 52% in 2020. The only other two European firms are tenth-placed Serviceplan PR Group, based in Germany (+51%) and Austria’s The Skills Group, in 15th place after growth of just shy of 46%.

The remainder of the table is all-American. In sixth place is the largest agency in the table, Real Chemistry, formerly W2O, which grew by 62% after a year of consolidating various agency brands, with fee income of $360m. It’s closely followed by Curley Company, which grew 62% to $3.9m. Fast-growing technology firm SourceCode Communications is in ninth place, with fee income up almost 60% to $5.2m, and in 11th is Current Global, up 50.7%. Making up the final three places are Global Gateway Advisors, up 50%, Confidant, up 47%, and technology specialist Clarity, up 47%.

Because rapid growth rankings tend to favour smaller, newer boutiques, every year we also look at the fastest-growing larger PR firms with revenues of more than $30m. This year, six of the top 10 firms in this size bracket hail from the US (up from five last year), only one of which (Real Chemistry, formerly W2O) featured in 2020, and at least three feature as a result of their focus on one of this year’s growth areas: healthcare.

And after last year’s prominent showing from Germany, which grabbed three of the top five spots in 2020, this year there is only one German firm featured: Serviceplan PR Group – which was not listed last year – up 52% to earnings of $52.8m, putting it in second place.

As in 2020, not a single Asia-Pacific firm made this table this year, and UK firms are again also absent. The remaining three places are left to European firms, again, none of which featured last year in this table: Rud Pedersen in sixth place, headquartered in Sweden, which grew 32% to $34m; Switzerland’s Farner Consulting in ninth place, up 25% to $40m; and edging into the top 10 for the first time, another global healthcare specialist, Evoke Kyne, up 23% to just shy of $31m in fees.

Agency growth in 2020 was largely about being boutique, scrappy or new, unless you were in healthcare in which case those other factors didn’t necessarily matter. Case in point: this year’s top-ranked agency, consumer firm Spool Marketing and Communications, registered growth of 173.2% to nearly $2.2m in fee income just two years after being launched by a big agency refugee. The 87.5% growth registered by the second-ranked agency, The Sway Effect, shows operating under a new model, one that promotes alliances, is a good thing. Fourth ranked Curley Company, known best as a corporate and public affairs firm, grew by 62% growth to $3.9m in fee income with just 13 staffers; tech-focused SourceCode Communications, which grew by 51.9% to $5.1m, is among the top five fastest movers in the US for the third time since its 2017. Third ranked Real Chemistry (formerly W2O Group), however, is in a whole other category than its fellow top five fastest movers, a $360m operation that grew 62% in 2020 resulting from a surge in healthcare companies’ demand for support, as well as well-calculated multiyear growth strategy.

The second half of the US’s fastest movers includes IPG’s Current Global, which is making its second appearance since its 2019 inception resulting from a Current Marketing/Creation merger. A spate of new business wins drove Current Global’s fee income 50.7% to $31.8m. A decade after its launch, corporate & financial firm Global Gateway Advisors was on the rise in 2020, thanks to an uptick in crisis and issues management work. GGA’s business was up 50%, up to $4.5m. Confidant, which refers to itself as a collective of “big agency defectors,” saw revenue rise 42.7% to $3.6m — a testament to its focus on client service. With $9m in fee income — a 47% lift from 2019 — Clarity PR in 2020 reaped the rewards of expanding to be a small, but global, player working with companies across sectors and regions. Public affairs firm Bully Pulpit Interactive, best known for its political work, was the 10th fastest mover in the US, thanks to a 44.5% rise in revenue, or $43.6m.

Our northernmost neighbors account for all five of the fastest movers in the Americas, a marked difference from last year when a healthy mix of Canadian and Latin American agencies shared the stage. Yet having one region or the other dominate is not unusual, either. In 2019, four of the five fastest growing agencies in the Americas were Canadian. In 2018, meanwhile, the top five was dominated by Latin American firms.

Topping this year’s list is No Fixed Address, which saw revenue rise 27.3% to $13.6m thanks to the firm making waves globally as well as Canada. Last year, the top spot belonged to LatAm specialist JeffreyGroup. Next up: Craft Public Relations, whose fee income rose by 19.8% to $2.4m thanks, in part, to winning Tim Hortons. Tact Intelligence-conseil is making its fourth consecutive appearance on the list (the firm ranked second last year); the agency’s revenue rose 18.5% to $12.1m in 2020. Toronto’s Proof Strategies, which publishes the annual Cantrust Index, was the fourth fastest growing firm in the Americas, registering fee income rising 13.2% to $19.3. Argyle Communications, one of Canada’s oldest agencies, continues the upward trajectory that has made it one of the Americas fastest growing firms for three consecutive years. The firm’s fee income rose 11.3% to more than $12.5m in 2020, during which Argyle opened a Washington, D.C. office — its first expansion outside Canada.

The UK’s top ten fast-moving agencies table, which we have again split out from the European top 10, is a real mix of consumer boutiques, corporate heavyweights and niche specialists, including two firms in the top three who are notably focused on ESG and sustainability. And while the threshold for making the top ten last year was 22% growth, not surprisingly, this year it was down, to 15%.

Only one firm carries over from 2020: strategic communications agency Headland – the largest in the table – which was in tenth place last year and this year rises to sixth, with fee income up 20% to $22m. The second biggest agency in the top ten is another corporate agency, Powerscourt, which grew 20.7% to almost $15m.

In pole position this year is Kirsty Leighton’s fast-growing three-year-old agency (and B-Corp) Milk & Honey PR, one of the sustainability experts, which has expanded to Sydney and London and grew by a stunning 62.5% to fee income of over $2m. It’s followed by Tyto, founded four years ago by ex-Hotwire director Brendon Craigie, which operates across Europe and grew 52% to $2.9m. Both also made it onto the Global table.

In third place is Nik Govier’s two-year-old corporate and creative consultancy Blurred – the other ESG specialist in the table – which grew 45% to over $2.2m. Other consumer agencies in the table were fourth-placed Talker Tailor Trouble Maker, up 21% to fee income of almost $1.7m, and recent Publicis acquisition Taylor Herring, which had another solid year of growth, up 15% to $6.3m, and lands in tenth place.

This year’s European table, which again excludes the UK, features agencies from eight countries, up from six last year. While last year Germany dominated the table with half of the top ten, this year it has only two, neither of which appeared in 2020: Serviceplan PR Group in the top spot, up 51% to $52.8m, and third-placed Faktenkontor, up 38.7% to $19.6m.

Along with Serviceplan, Austrian agency The Skills Group is the only other continental European agency to make the Global table, appearing in second place after growing by almost 46% to $5.6m. Other than Germany, only one country has more than one contender in the table: Russia, where CROS took sixth position, up 23% to $13m, and Mikhailov & Partners, up 19% to almost $20m to take tenth place.

Italian-headquartered public affairs group SEC Newgate, which last year took first place after growing through acquisition, is the only agency to carry over from 2020, and appears in ninth place with fees up 21% to over $96m.

The other agencies come from around the continent, featuring three agencies also in the top ten fast-growing agencies with income over $30m: fourth placed Rud Pedersen, headquartered in Sweden, up 32%; Switzerland’s Farner Consulting in fifth after growing by 25%; and Dublin-based Evoke Kyne, growing by 23.2% and landing in seventh place. Finally, Paris-based Jin enters the table in eighth place after growing by 21.5% in 2020, to fees of $13.7m.

It’s worth noting that while the threshold for entering the top 10 in 2020 was 28% growth, this year it dropped substantially to 19% growth.

Despite handling the Covid-19 pandemic better, in many cases, than several Western countries — firms from Asia-Pacific, the Middle East and Africa appeared to take the brunt of last year’s economic downturn, with MNCs often protecting home market spend at the expense of further flung regions. Even so, the fastest-growing PR firms across these regions demonstrated again how domestic Asian players are consistently outperforming their respective markets, with Asia-Pacific independents accounting for nine of the top 10 spots, and again displaying welcome geographic diversity.

Taking top spot this year is China’s appropriately named Topline Brand Management, a new entrant that surged 64% to US$1.6m. That placed it narrowly ahead of India’s Kaizzen, which ranked third in 2020. Kaizzen grew 64% to crack the $1m barrier, ahead of Sri Lanka’s PR Wire in third place. Last year’s fastest-growing Asian firm, ERA Myanmar, ranked a credible fourth in 2021, up 40% to pass $2m in fee income. Clockwork remains the sole African representative on this list, jumping from ninth in 2020 to fifth this year after growing 37% to $5m.

Australia is represented by new entrants Thrive (+34%) in sixth and Icon Agency (+27%) in ninth. Another new firm is Singapore’s Distilleri, which ranked seventh after growing 29% in 2020, while Korea’s PR One is the biggest firm on this list, up 28% to almost $29m in fee income. That leaves Southeast Asian firm Vero in 10th, after growing 21% to exceed $3m. 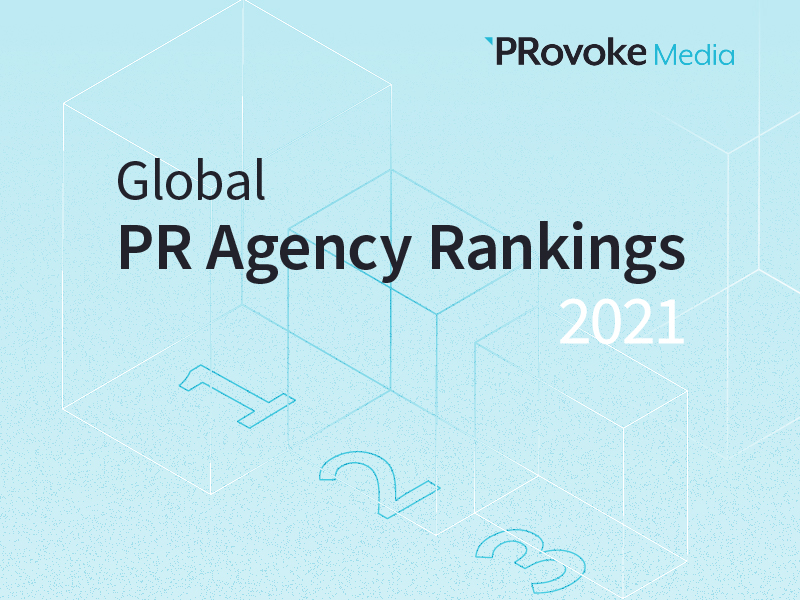