In terms of geographic spread, this year’s ranking is dominated by the global PR industry's traditional powerhouses, with the US and UK together accounting for 10 of the 15 fastest-growing agencies in the world. That includes UK behavioural science specialists Lynn in first place, after six-fold growth to $3.5m, ahead of US player Victorious PR.

Indeed, the overall growth narrative that characterised this year's Rankings is reflected in the fact that no fewer than 14 of the top 15 fastest-growing PR firms reported triple-digit growth, an extraordinary state of affairs, even if you account for the small base of many of these players. Unsurprisingly, higher levels of growth favoured newer players, such as the UK's Hard Numbers (+368%) and Fight or Flight (236%), and South Africa's Razor (+164%), rounding out the top five.

Malaysia's VoxEureka (+163%) is the lone Asia-Pacific representative in the top 15, ahead or Korean/American entertainment specialist Reels (+156%) in seventh position. Bulgarian stalwart United Partners (+156%) is not only the fastest-growing European firm in the top 15, but also the oldest agency on the list, marking its 25th anniversary in some style.

The rise of Wachsman (+129%) surely reflects increasing demand for its specialist blockchain expertise, while the top 10 is rounded out by an American representative from another outperforming sector, healthcare specialist Verge Scientific (+124%). In 11th place, Italy's Pomillio Blum (+124%) is the largest consultancy in the top 15 at almost $70m, but also brings specialist expertise, in this case in public sector and international institutions.

DC public affairs shop ROKK Solutions ranks 12th after growing 120% to crack the $10m barrier, ahead of UK fintech shop Drofa Comms (+106%). Which leaves Germany's irrepressible tech agency Piabo in 14th after it doubled to $15m, and US awards darling Bospar clocking in at 15th (+97%).

Because rapid growth rankings tend to favour smaller, newer boutiques, every year we also look at the fastest-growing larger PR firms with revenues of more than $30m. This year, six of the top 10 firms in this size bracket hail from the US (the same as last year), none of which featured in 2020, and reflect the high growth areas of corporate, public affairs and healthcare. In addition, three firms feature from Asia-Pacific, a region which did not supply any firms to this table in 2021 or 2020.

But the top spot is taken by a relatively dark horse in Italy's Pomillio Blum, a public sector and international institution-focused firm that grew 139% in 2021 to $69m in fee income. US financial powerhouse ICR comes in second with 84% growth to $195m, ahead of China's CYTS-Linkage (+55%).

The next five places are American PR firms, featuring numerous Agency of the Year contenders. Public affairs player Precision Strategies (+52%) ranks fourth, ahead of independent heavyweight Finn Partners, which grew 49% to $162m after nine acquisitions in 2021. In sixth spot, healthcare specialists Spectrum Science expanded by 49%, while Day One consolidated its Digital Agency of the Year selection by growing 47% to $35m.

In eighth spot is Red Havas, which benefited from the rebranding of several operations under the new brand. The final two places are taken by two domestic heavyweights from Asia-Pacific: Korea's Prain Global (+44%) in ninth, and Indian firm Adfactors (+42%) rounding out the top ten.

US growth in 2021 favoured newer types of agencies, particularly at the smaller end of the scale, with entrepreneur-focused firm Victorious PR taking top spot after almost five-fold growth in 2021. In second place is Korean/American entertainment specialist Reels (+188%), ahead of Wachsman (129%), which benefited from its expertise in blockchain and cryptocurrency.

In seventh position, financial powerhouse ICR is the biggest firm on the list at $195m, ahead of Clyde Group (+70%). Texas corporate firm LDWW comes in ninth with 70% growth, while new technology agency SourceCode rounds out the top ten after expanding by 66%, including a small acquisition.

Latin America dominates the Americas (ex USA) ranking, accounting for seven of the 10 firms, compared to five last year. But it is Canada's Craft Public Relations (+72%) which takes top spot, after coming in second one year ago. Two Argentinian firms follow, with Agora (+50%) in second place and Urban Grupo (+44%) ranking third.

In fourth place, Mexico's Another grew by 39% to crack the $10m barrier, while fifth place sees the largest firm on the list and the first Brazilian contender, in Grupo Inpress, which jumped 38% to $42m. Another Brazilian firm, Grupo CDI (+36%), ranks sixth, ahead of perennial fast-grower and Canadian Agency of the Year Argyle, which grew 34% to $17m in 2021.

Costa Rican Ketchum affiliate CCK (32%) takes eighth place to feature on this ranking for the first time, while Brazil's Approach is ninth after 30% growth. Canada's aptly-named PR Associates (+22%) rounds out the top ten, which also marks the first time the Americas has expanded beyond a top five.

The UK’s top ten fast-moving agencies table is dominated by newer agencies, including several who bring a refreshing sense of renewal to the industry, thanks to offerings that focus on evolving practice areas and sectors. The threshold for inclusion jumps to 67% this year (from 15% in 2021 and 22% in 2020), reflecting the stellar performance of the UK PR market in 2021.

In sixth position, The Romans clear a very high bar in ranking as the UK's fastest-growing consumer firm, growing by 90% to almost $7m, while ESG and corporate specialist Blurred (+73%) is one of only two holdovers from last year's table, taking seventh place.

In eighth place is Woodrow (+72%), after the launch of new offices in Amsterdam and Nairobi, ahead of creative specialist Manifest, which was up 70% to almost $7m. Rounding out the top 10 is last year's fastest-growing UK firm Milk & Honey, which consolidated its progress by expanding 67% to $3m.

This year’s European table features agencies from five countries, down from eight last year. France, somewhat surprisingly, accounts for the most number of firms and, remarkably, all of the top 10 are new entrants. But it is Bulgarian stalwart United Partners which celebrates its 25th anniversary in style, taking top spot after growing 146% in 2021. Italy's Pomilio Blum (+139%) also makes its first appearance on this list in second place, ahead of German tech specialist Piabo (+100%) in third.

In eighth is France's L'Agence RP (+44%), ahead of Apple Tree Communications, which grew by 44% to crack the $10m barrier. Fast-growing French firm Jin rounds out the top 10 with 39% growth.

After bearing the brunt of 2020's economic downturn, the Asia-Pacific region bounced back impressively in 2021, with the threshold for inclusion on the fastest-growing agency top 15 jumping from 14% last year to 41%. 12 of the top 15 hail from Asia-Pacific, but it is Africa that accounts for two of the top three — with South Africa's Razor clinching first place after growing 185% to $1.6m. 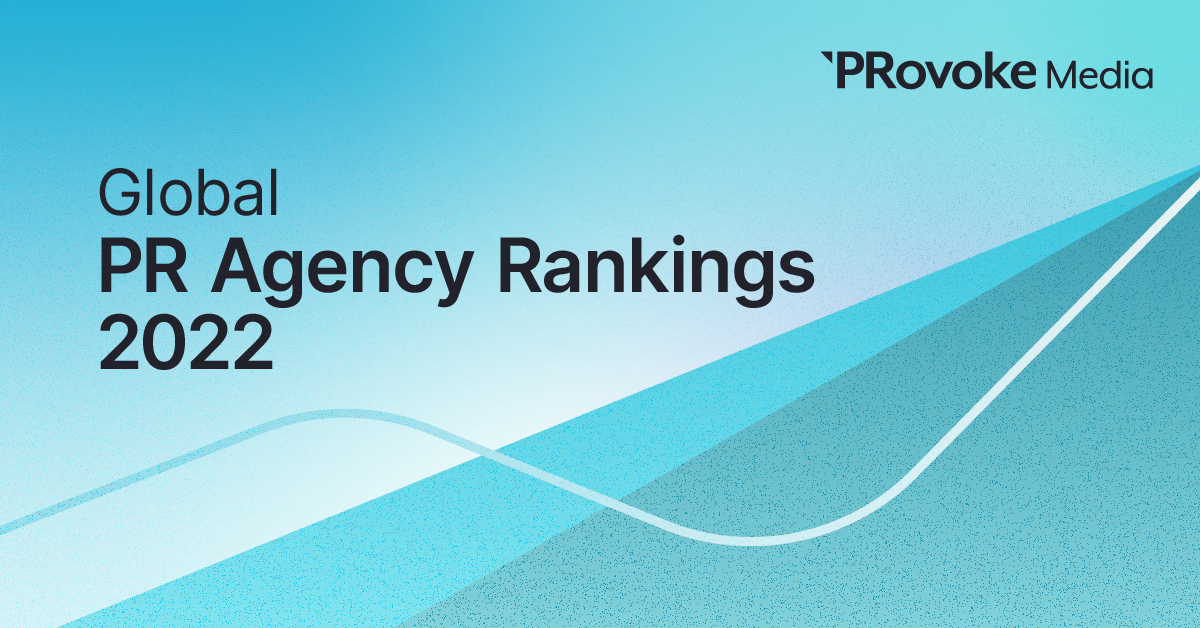