Our sixth annual Innovator 25 Americas includes innovators made the cut because they're making meaningful, and necessary, changes to how we think of influence during this tumultuous times. Among the innovators on this year's list are the Parkland survivors who revitalized the sensible gun law movement, the creative forces behind campaigns — like P&G's "The Talk," Anheuser-Busch's "Turning Beer Into Water" and Sambito's #NatureRepresented — that reflect the social movements and urgent causes of this moment. Champions for reinventing the workplace, creative disruption, diversity & inclusion, measurement and analytics and more equitable technology also make this year's list.

The stats below mostly reflect the 84% of the Innovator 25 who opted to take our survey. 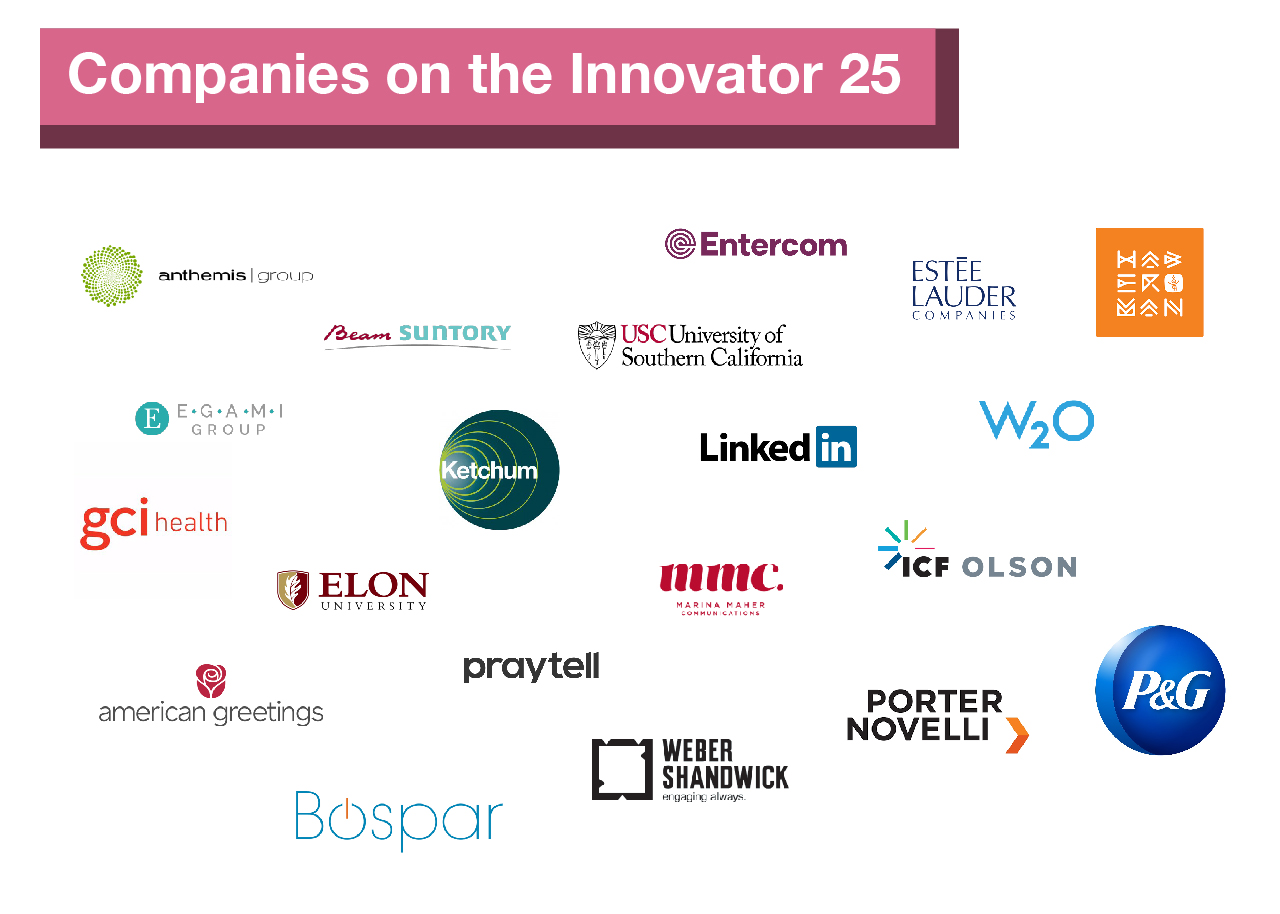 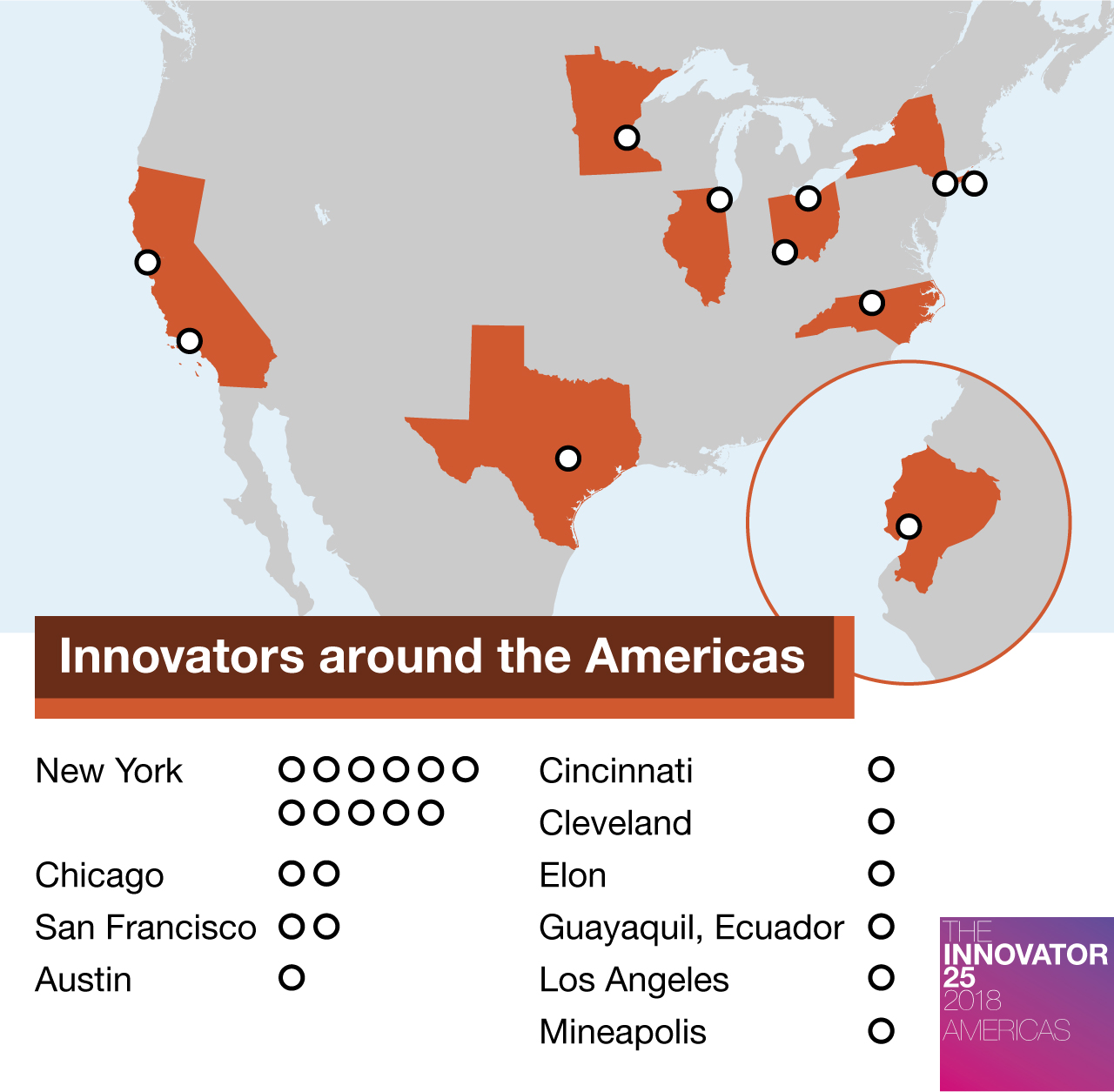 This year's class comes from a range of organizations— PR firms that are excelling at creativity or vision, companies that taking seriously the call to do good and activists who are leading the movements that will shape the future. Many of those on the list were involved in some of the most celebrated and innovative work that pushes the boundaries of influence and engagement.

Like most years, the New York outshines the rest of the United States as the hotbed for innovators. But interestingly, the innovators were more distributed across the United States this year. We continue to look towards Latin America and to Canada for innovation, as one of this year's most impressive campaigns — "Nature Represented" for environmental services company Sambito was done in partnership with the Ecuadorian ad agency Maruri Grey (the firm's CEO Eduardo Maruri is on the list). 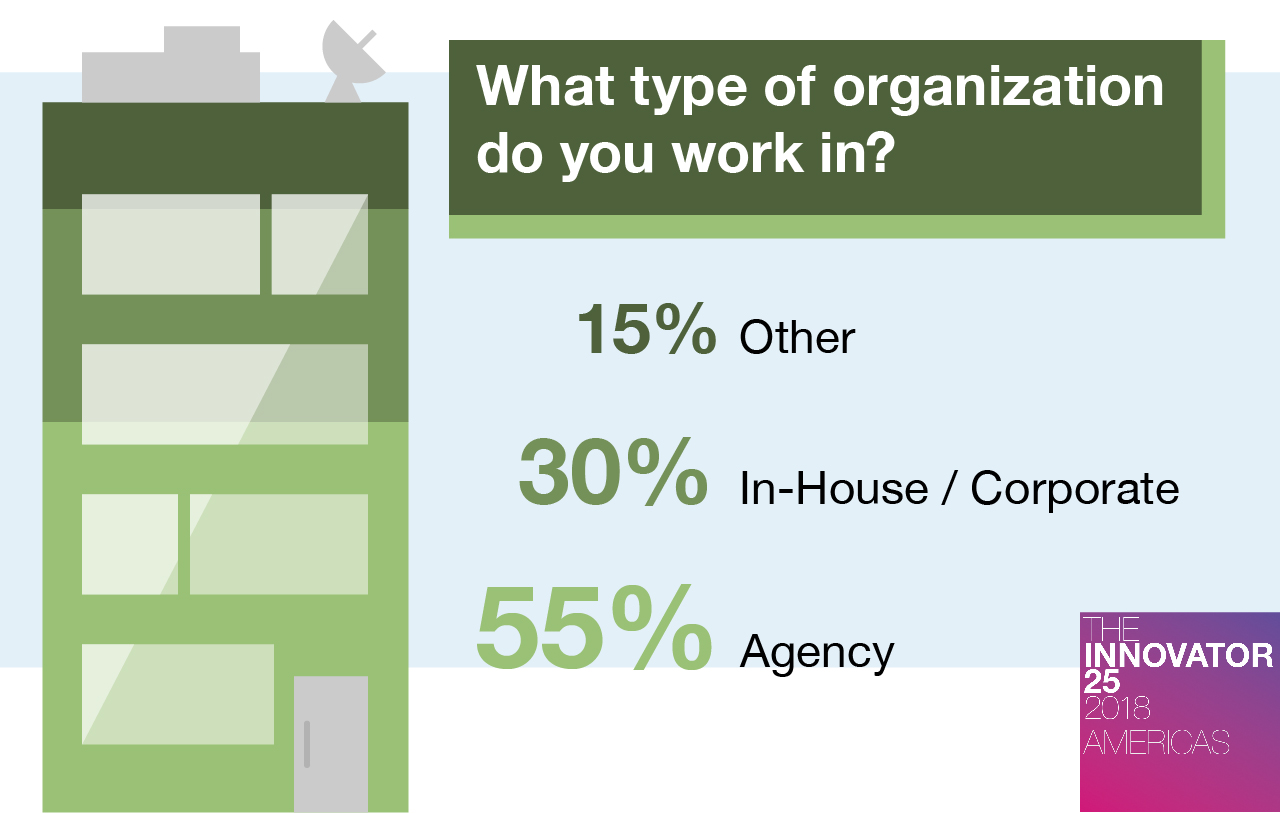 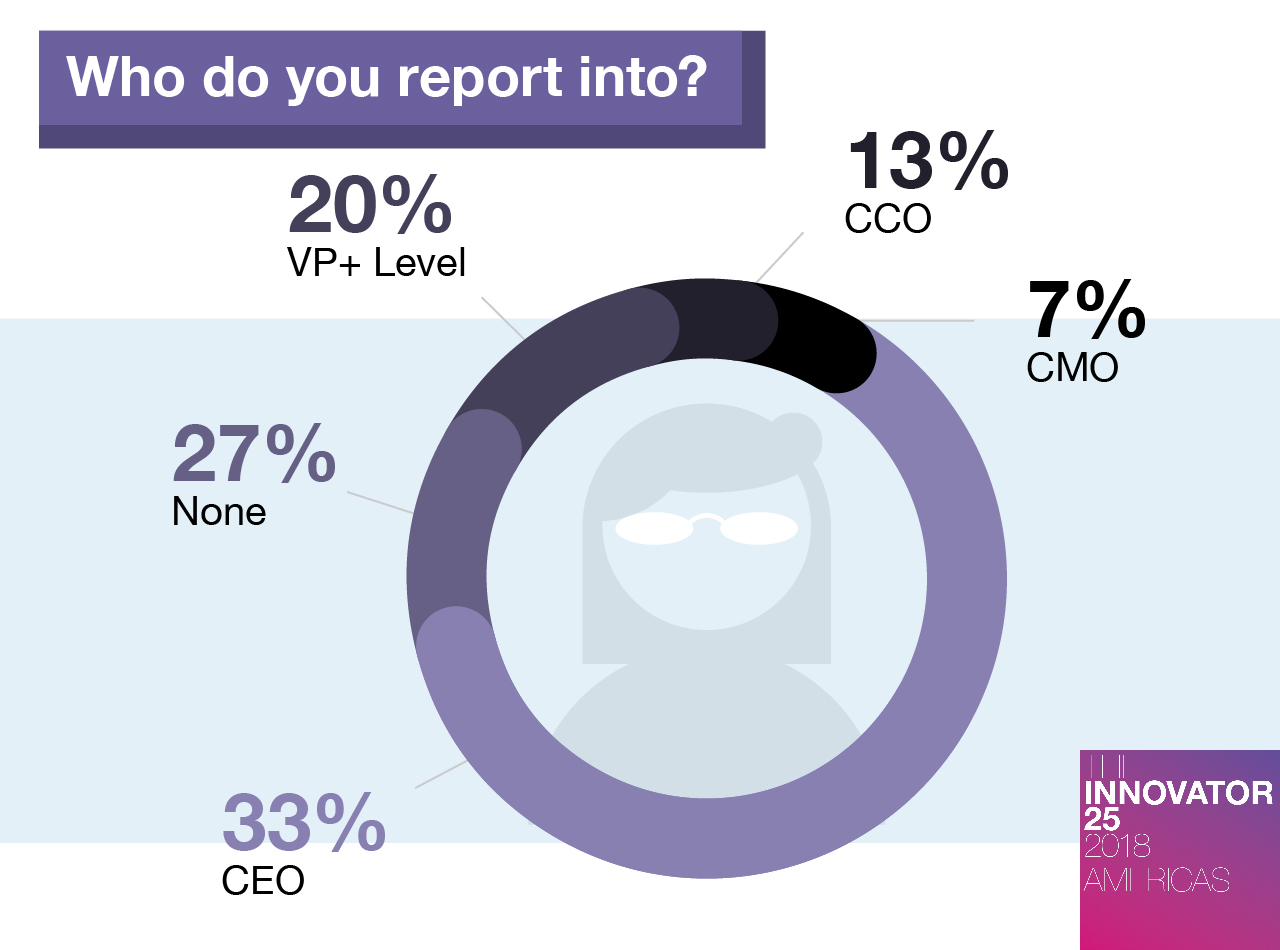 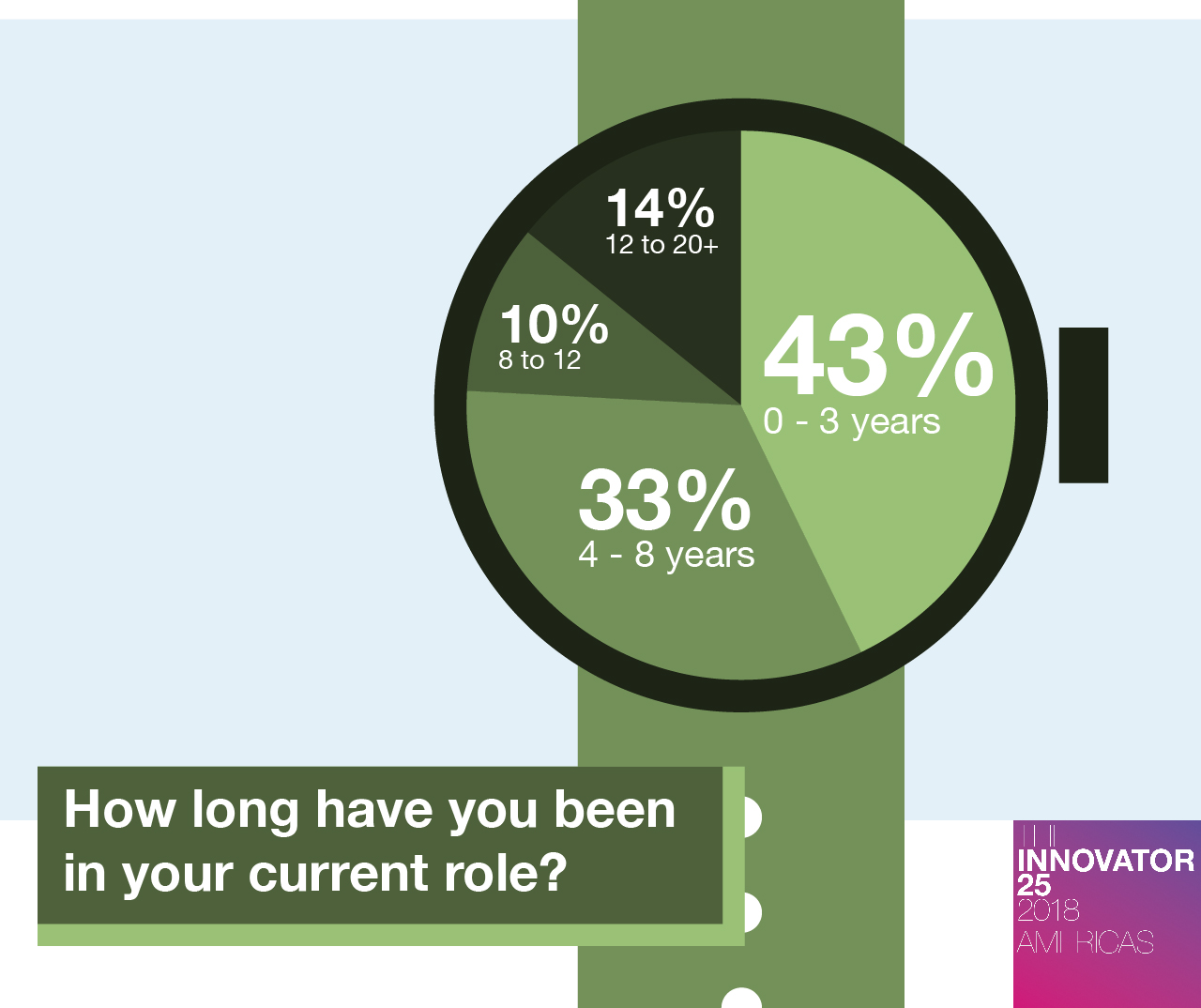 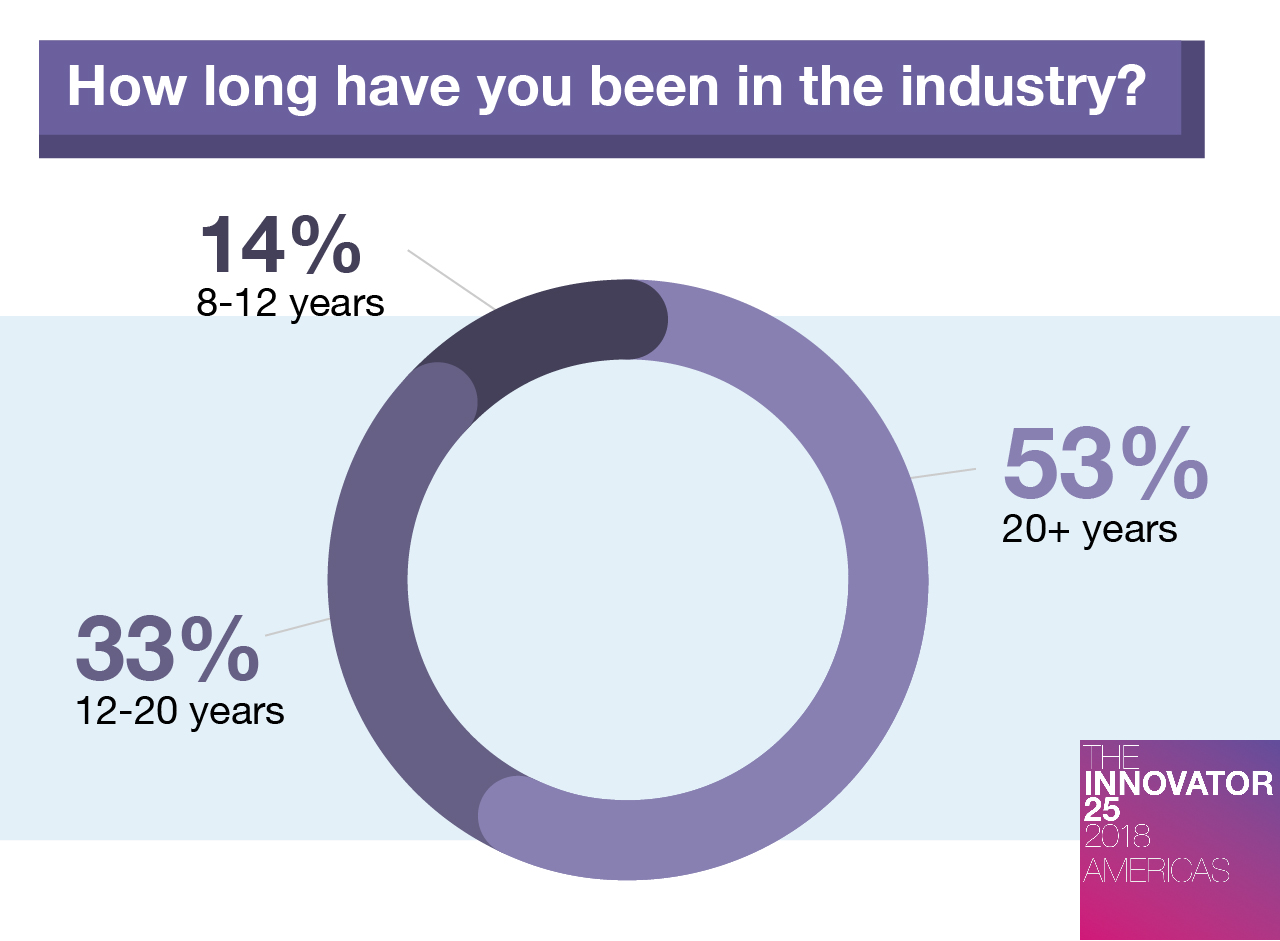 Many of this year's innovators are well-seasoned professionals, as the vast majority have been in their professions for nearly a decade or longer. This reinforces that innovation isn't necessarily coming from those new to a field but those with vision towards challenging the status quo. In fact, some research now shows that bringing together people who share ambitious goals is an effective way to facilitate innovation. One-third report directly into their CEOs while another 27% do not report into anyone — indicating the entrepreneurial bent for disrupters.

For the second year in a row, many on the list — while not new to their industries — are new to their current positions. More than 75% have been at their jobs for less than a decade and 43% have been there for less three years. MMC's Joydeep Dey  joined the firm last year after more than seven years at advertising shop J. Walter Thompson.

"PR has always found an earned, interesting way to connect consumers to brands," he said about his industry shift. "That earned first mindset, paired with technology and analytics will propel brands forward." 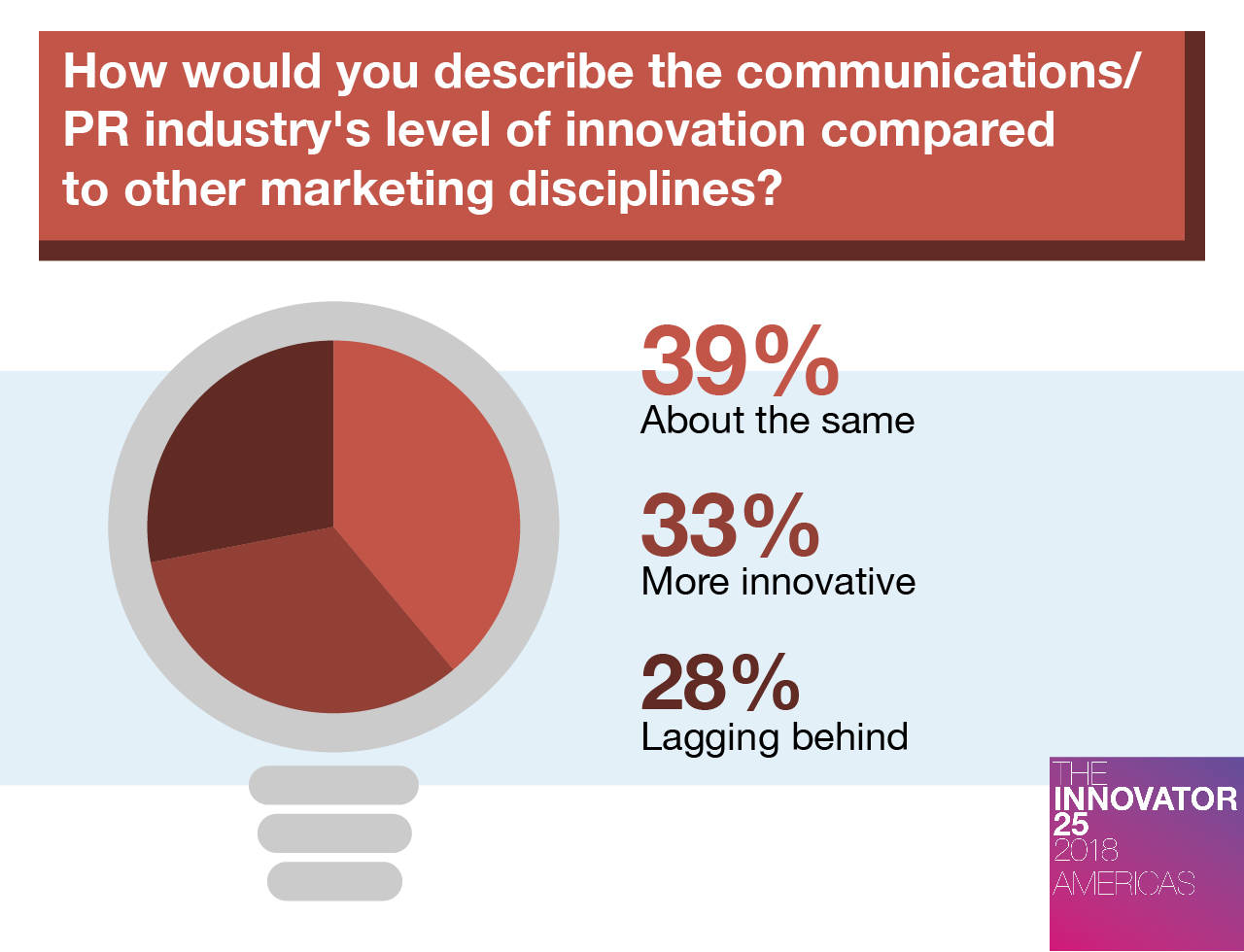 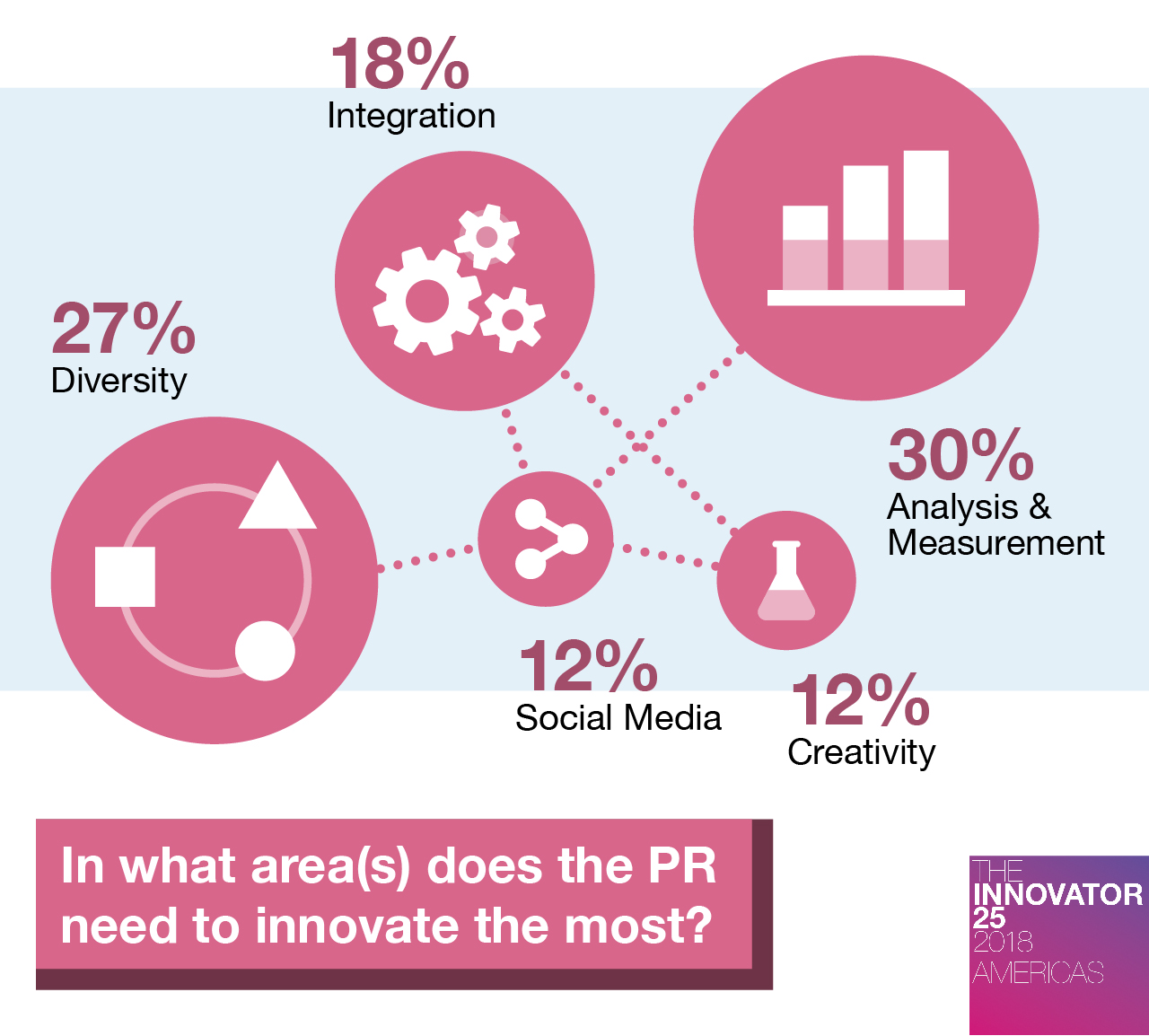 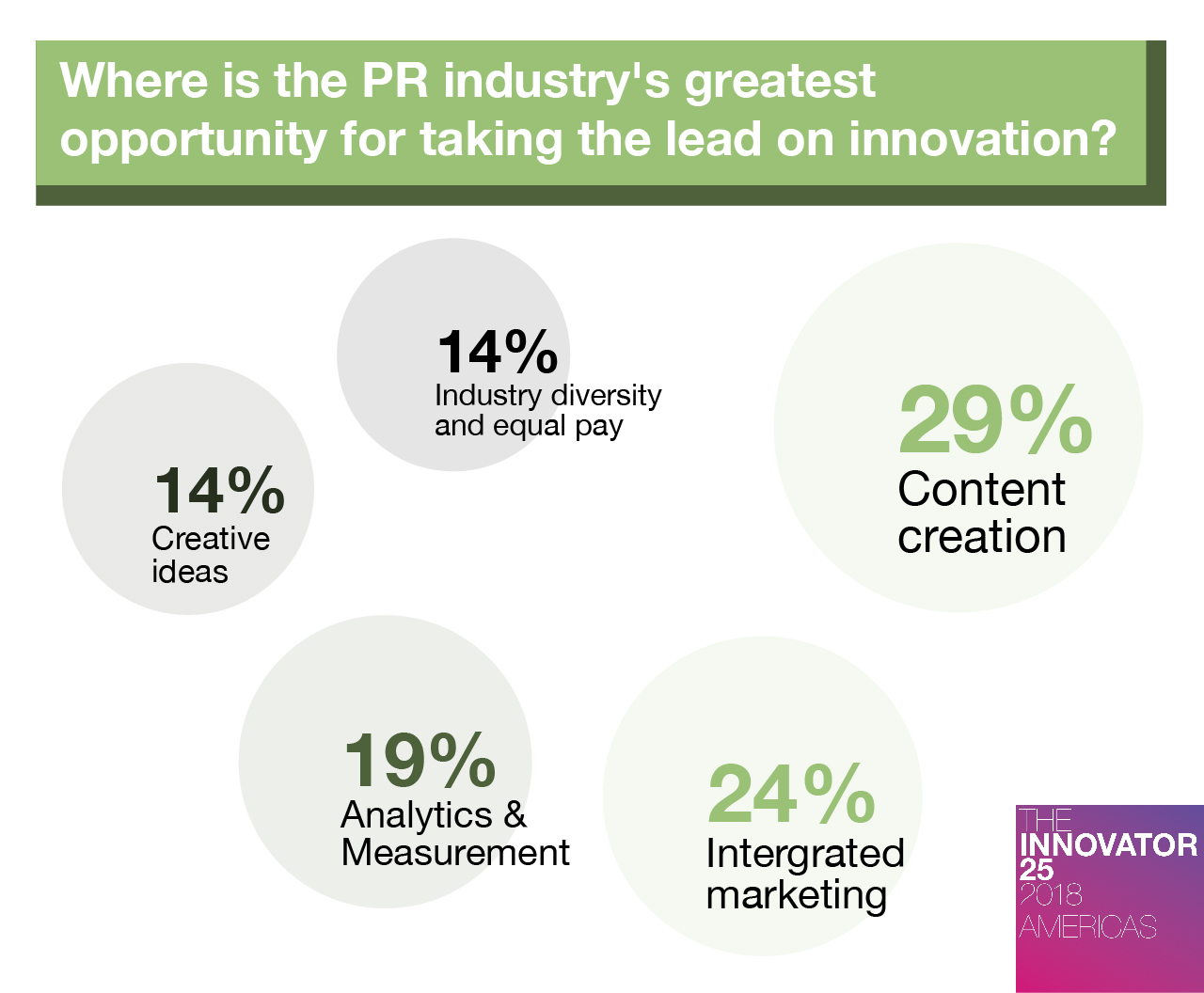 "At its heart, PR and communications is an old, old business — that makes it rich in experience and traditions in a way that newer fields like data science are not and may never be," says W2O Group's Andy Boothe. "But it also creates an environment where it feels like everything's been tried, and there's already a known way that things are supposed to be done."

"Public relations should encompass anything that enhances relations with your public/s," says Bospar's Chris Boehlke. "When Virgin Airlines changed safety messages from boring to great performances - that was innovation in relating to their customers. Or having their pilots step out of the cabin to welcome people aboard. This is innovative PR at work."

"I think the industry is often looking up to leadership for approval, rather than speaking to people most affected by a company," says USC's Safiya Noble. "I think we should talk to people who are harmed or experts and critics to learn and improve, rather than hold them at arms’ length and pretend they don't exist. The best learning comes through careful study and difficult conversations."

"We are the most flexible discipline because we have to see around corners," says GCI's Wendy Lund.

When it comes to where the industry most urgently needs to innovate, analytics + measurement topped the list followed, for the first time, by diversity. Interestingly, integration, creativity and social media have fallen considerably this year compared to the past. Porter Novelli CEO Brad MacAfee even credited The Medici Effect author Frans Johansson as being an innovation inspiration because "the approach he takes is a deeply rooted believe that diversity drives innovation."

Yet when it comes to where PR's greatest opportunity for innovation exists, only 14% chose diversity/equality. With this question, the more traditional elements surfaced ahead of the others with content creation and integrated marketing topping the list.

"We work in an amazing industry that challenges our thinking daily," said American Greetings' Patrice Molnar.  "As advocates for our company and brands we represent, we have the responsibility to bring our creativity and best thinking to every project." 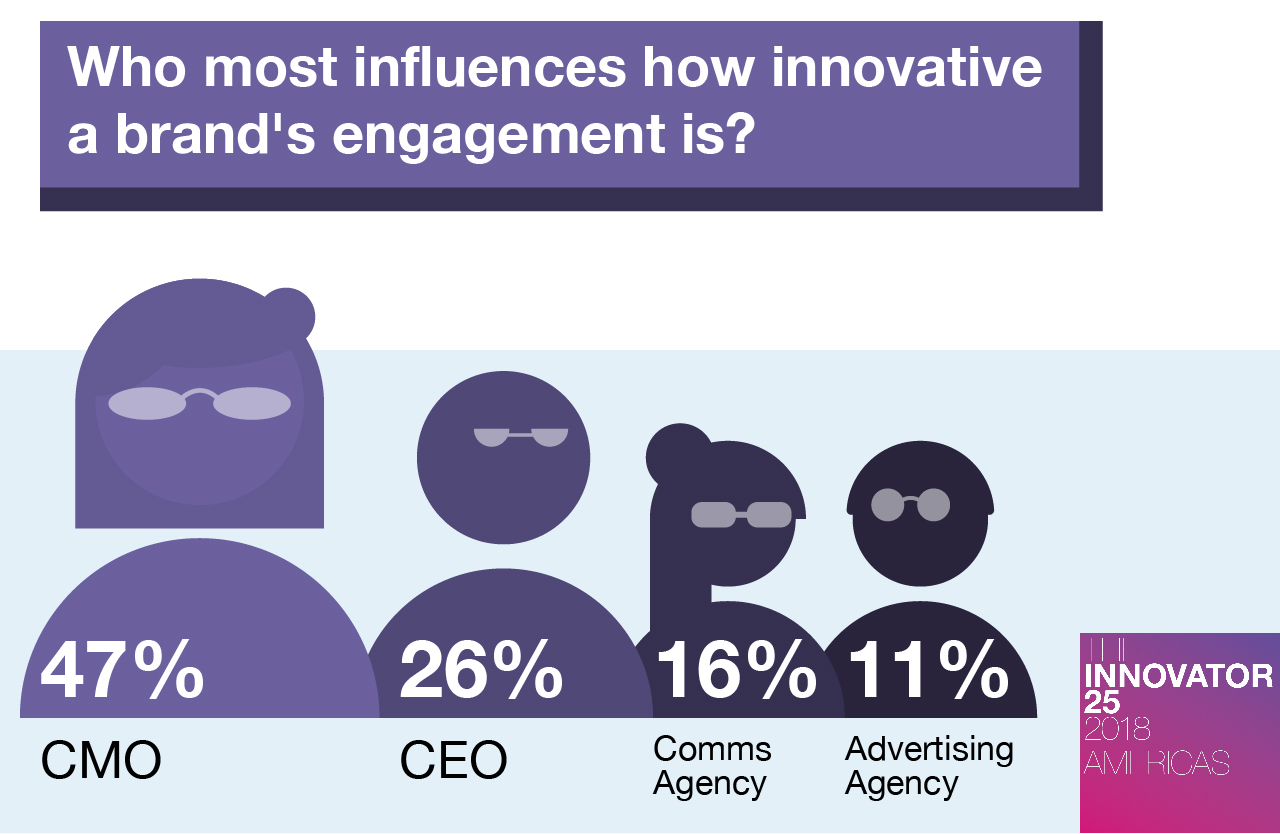 Interestingly, nearly half of the respondents credit the CMO for leading how innovation a brand's engagement strategy is (only 26% point to the CEO, meanwhile the rest say this rests with agency partners).

"I'll give a shoutout to Nike for reemerging as a true innovation powerhouse after what I consider to have been a teetering on the edge of losing its way in the early part of the last 5-7 years," says Weber Shandwick's Adam Wall.  "Not only have they always been among the most innovative marketers, but I think their sponsorship and athlete endorsement strategy is very effective, and most importantly, in my opinion, they seemed to have figured out their [direct to consumer] approach and reduced their dependency on retail partners."

"The most innovative campaigns are those where the genesis can’t be identified as paid, owned, or earned; but where one is surrounded and engrossed by the consumer’s truth," says P&G's Crystal Harrell.

Many of the brands identified as being innovative around PR and marketing are those with a purpose-driven mission or good corporate citizenry.

"This has since cemented my philosophy on how corporations are best positioned to do good in the world — by identifying their unique assets and finding an application for social good," says LinkedIn's Meg Garlinghouse. 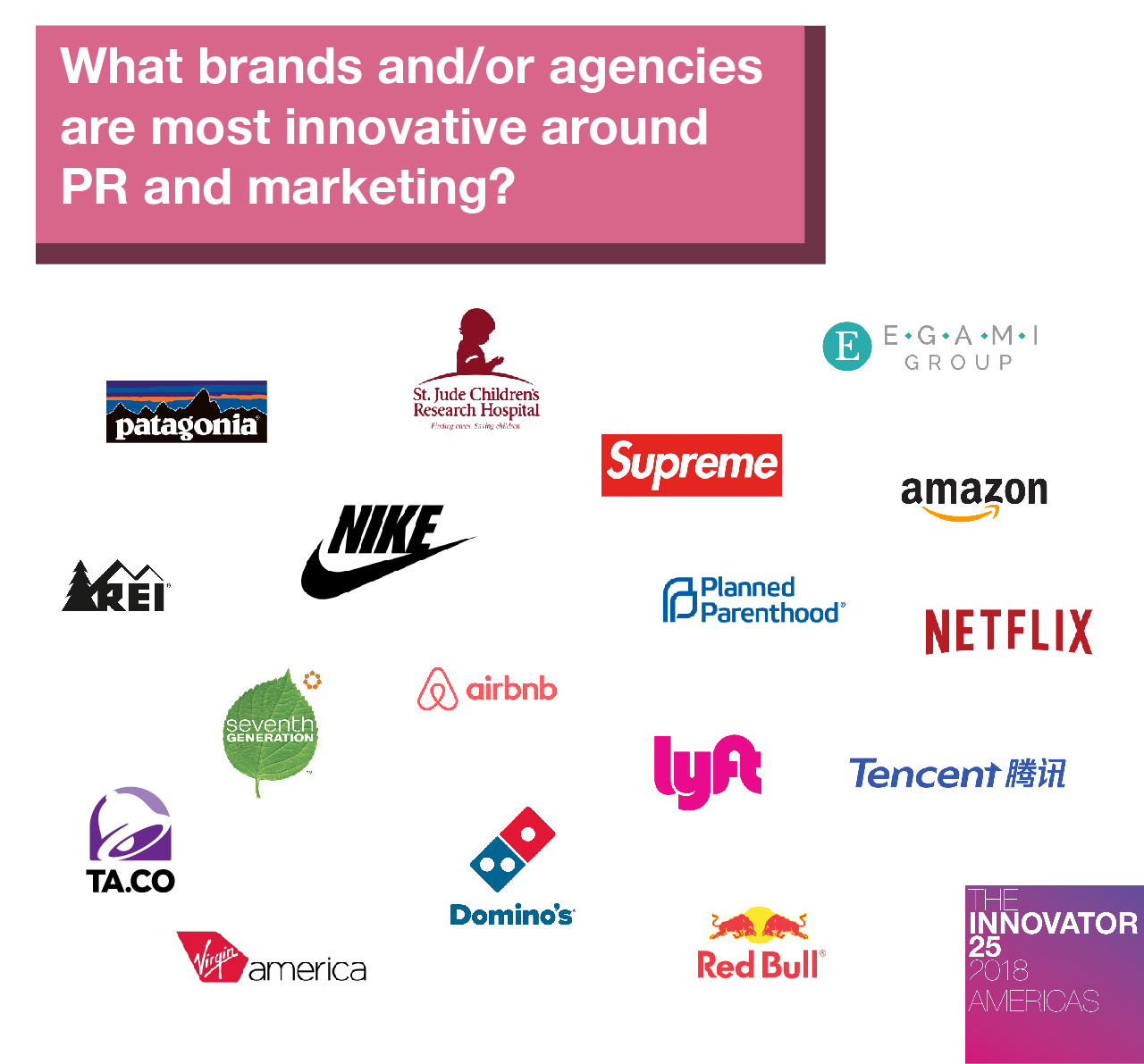 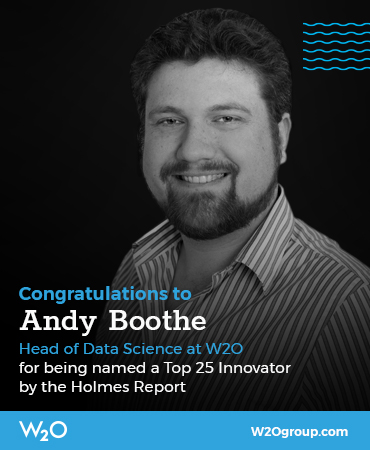 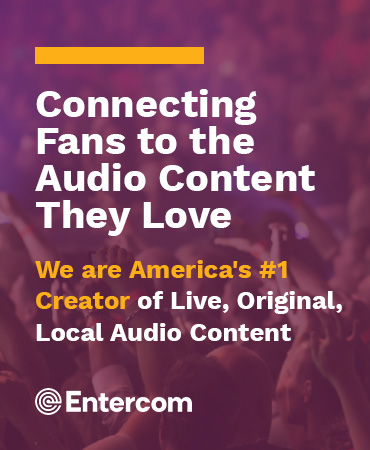